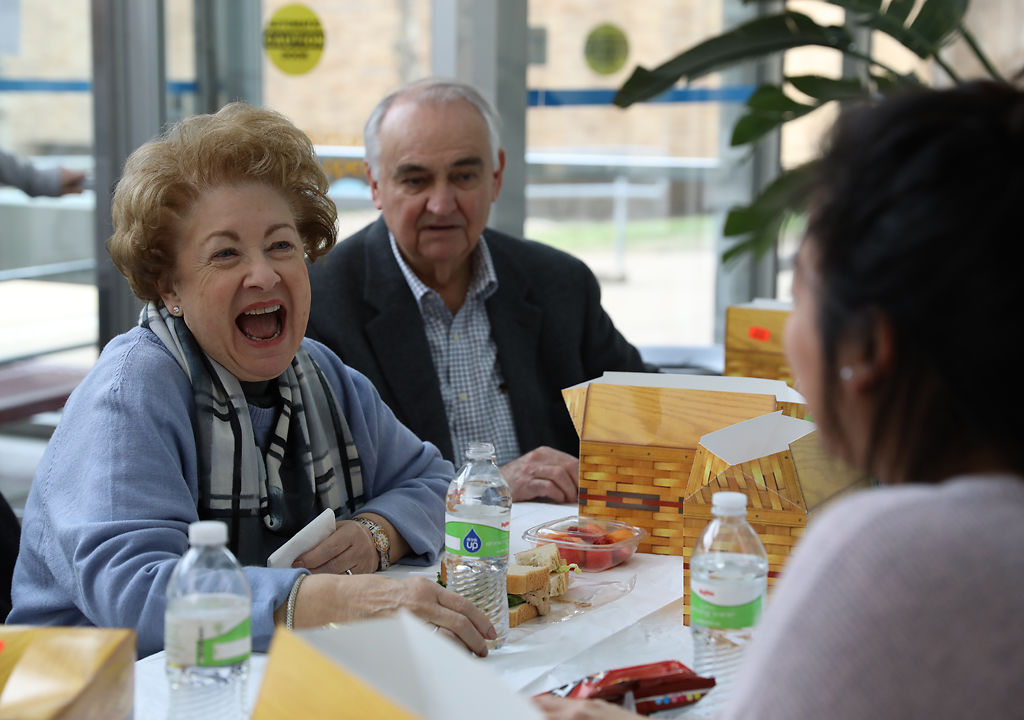 From left, Terry and Jack Meinzenbach talk to first-year medical student Maren Heller about MU's medical program at the Senior Teacher Educator Partnership meetup Friday at Acuff Gallery. The STEP program pairs seniors in the community with MU's medical students so the seniors can impact perspectives about aging. 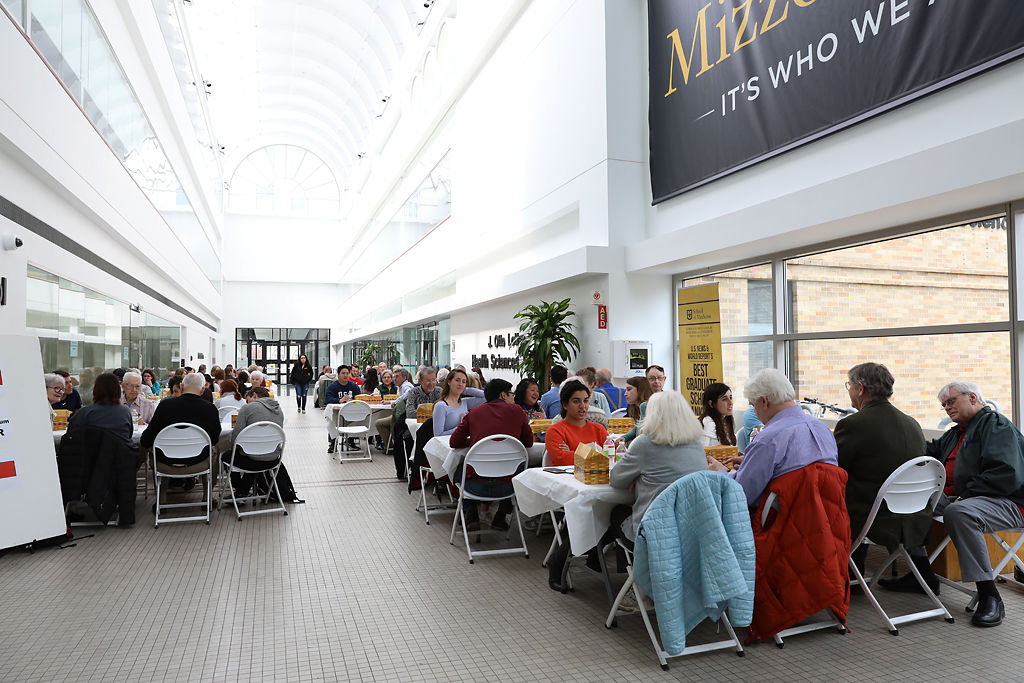 The Senior Teacher Educator Partnership program hosts a meetup for first-year medical students to talk to seniors in the community at Acuff Gallery on April 6 in Columbia. The program started in 2001. 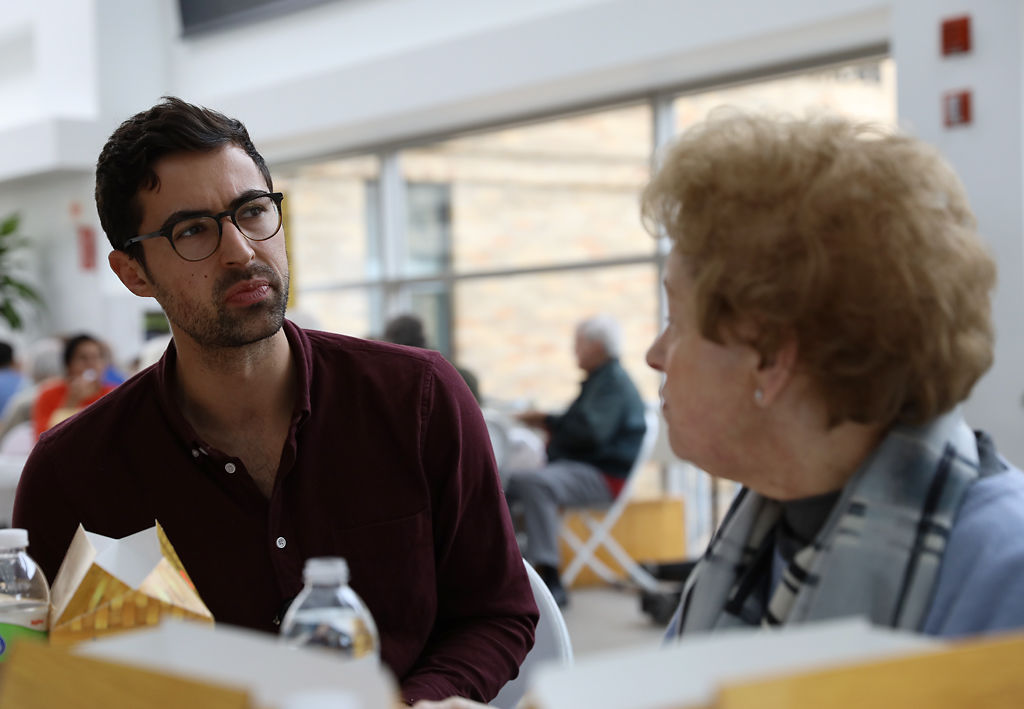 From left, Terry and Jack Meinzenbach talk to first-year medical student Maren Heller about MU's medical program at the Senior Teacher Educator Partnership meetup Friday at Acuff Gallery. The STEP program pairs seniors in the community with MU's medical students so the seniors can impact perspectives about aging.

The Senior Teacher Educator Partnership program hosts a meetup for first-year medical students to talk to seniors in the community at Acuff Gallery on April 6 in Columbia. The program started in 2001.

Maren Heller remembers her grandparents being older and less active in her early childhood.

Last fall, Heller saw a different side of aging. She met Jack and Terry Meinzenbach.

During her orientation at the MU School of Medicine, Heller was introduced to STEP, the school’s Senior Teacher Educator Partnership. Since 2001, STEP has paired first-year medical students with older adults in the community who are still active and involved.

The Meinzenbachs have been involved with STEP since 2010 with 10 student matches so far. This year they are paired with Heller and fellow med student Alex Oserowsky, also 24.

“We’re glad you did, too,” the Meinzenbachs said in unison.

STEP is one of at least 10 programs across the country referred to as “senior mentor programs.” A 2009 survey of these programs found they were successful in reversing stereotypes about age and building empathy among students training to be medical professionals.

Once Heller met the Meinzenbachs, both retired Boeing employees, she began to reconsider some of her assumptions about older adults.

That is a common outcome, said program coordinator Peggy Gray.

“Oftentimes students meet older adults in the hospital setting when they’re ill and not at their best,” Gray said. “So they don’t get a good picture of what it’s like to be an older adult.”

This school year, 78 older adults and 72 students are participating in STEP — more than half of the first-year class of medical students.

The STEP program requires seniors to be over 65 and to commit to monthly meet-ups at the medical school. They can catch up with their student partners and attend lectures about different subjects.

In April, “I can’t find my keys — should I be concerned?” was the topic, covering the normal apprehension about memory loss. The Meinzenbachs’ student partners attend the lecture as well — it’s a learning experience for them, too.

Heller described her relationship with the Meinzenbachs as a way to step outside the world of medical school every now and then and feel more like herself.

“I think if you ask anyone, it is such a bubble,” Heller said. “It just becomes this all-consuming thing, and it’s really nice to have normal interactions with something that forces you to step out of it.”

Beyond the monthly meet-ups, the Meinzenbachs often invite Heller and Oserowsky over for Sunday brunch, and they took Heller to see the musical “Anything Goes” at Stephens College. The couple also planned a dinner in January for their STEP students from the past three years, which gave the new students a chance to ask the older ones for advice.

Heller said it’s nice to spend time with older people who are energetic and sharp.

“It’s just a reassurance that older people still want to learn and stay active in communities regardless of age,” Oserowsky said.

“And that’s good, cause that’s what we want to project,” Terry Meinzenbach, 72, replied.

The Meinzenbachs both worked for Boeing in St. Louis, Terry as a contract negotiator between the aircraft manufacturing company and the Defense Department for 25 years, and Jack in finance for 44 years. After retirement, they began to attend classes through the Osher at Mizzou adult education program and participate in community events such as the True/False Film Fest and the Unbound Book Festival.

“One of the ideas of STEP is that the seniors tell their stories, and so our students learn in that way,” said Michael Hosokawa, senior associate dean for education at the School of Medicine.

“On the flip side of that, these seniors learn about where their doctors come from — they learn about what it’s like to be a medical student.”

Predictably, when exams are looming, “they don’t want to hear from you,” Terry said with a laugh.

For the Meinzenbachs, being part of the STEP program feels like a monthly infusion of new ideas. Jack, 73, said it encourages him and his wife to read up on medicine so they can relate to their students. Meeting with the students also lets them ask medical questions when they don’t necessarily want to see a doctor.

“It gives you more opportunities to engage in discussions about your health,” he said.

As an older adult, a doctor is almost always younger, sometimes by a lot. Jack said this can give older patients pause because they tend to want a doctor with a lot of experience. Talking with Heller, Oserowsky and all of their past STEP students has given him confidence in the capability and passion of young medical students.

“There’s so many new technologies and breakthroughs and different approaches to solving problems, and we wouldn’t get that if it wasn’t for this,” he said. “That’s not something you’re going to get anywhere else. To me, that’s the biggest benefit.”

Though STEP isn’t intended to encourage students to enter the field of geriatrics, Hosokawa said the program still benefits students.

However, STEP’s future is uncertain. It’s a free program and costs very little to run, Hosokawa said, but it needs someone like Gray to run it. Hosokawa and geriatrician Steve Zweig, STEP’s creator, attribute the program’s growth and success over the years to the energy she brings to the program.

Gray ran the program through the Interdisciplinary Center on Aging until budget cuts forced it to shut down last summer. Now under the Family and Community Medicine umbrella, STEP has continued under Gray’s direction.

Hosokawa said he put enough money in the department budget to keep STEP funded but is waiting on the state legislature to determine the extent of a financial hit next year.

“As long as I’m in this position, I’m going to try and find the dollars to keep it going,” he said.

Many of STEP’s participants know the program could be in jeopardy in the coming years. Jack called the possibility of the program ending “a tragedy.”

“I think that would be such a shame,” Heller said. “I love being a part of this.”

For now, the Meinzenbachs are planning another group dinner at the end of this summer when their student partners return to Columbia to start a new school year. In May, the Meinzenbachs will meet up with their first STEP student from 2010 and his wife in Kansas City.

Terry chooses one word to describe her and Jack’s relationship with all of their STEP students:

“Friends,” she said. “I really would like to hope that we are lifelong friends.”