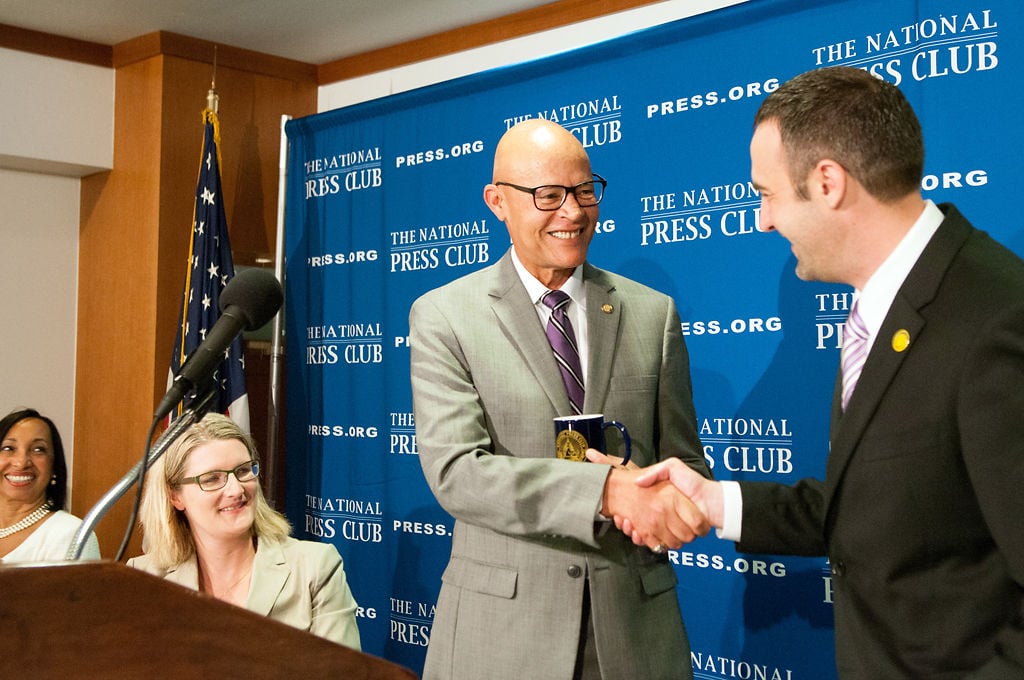 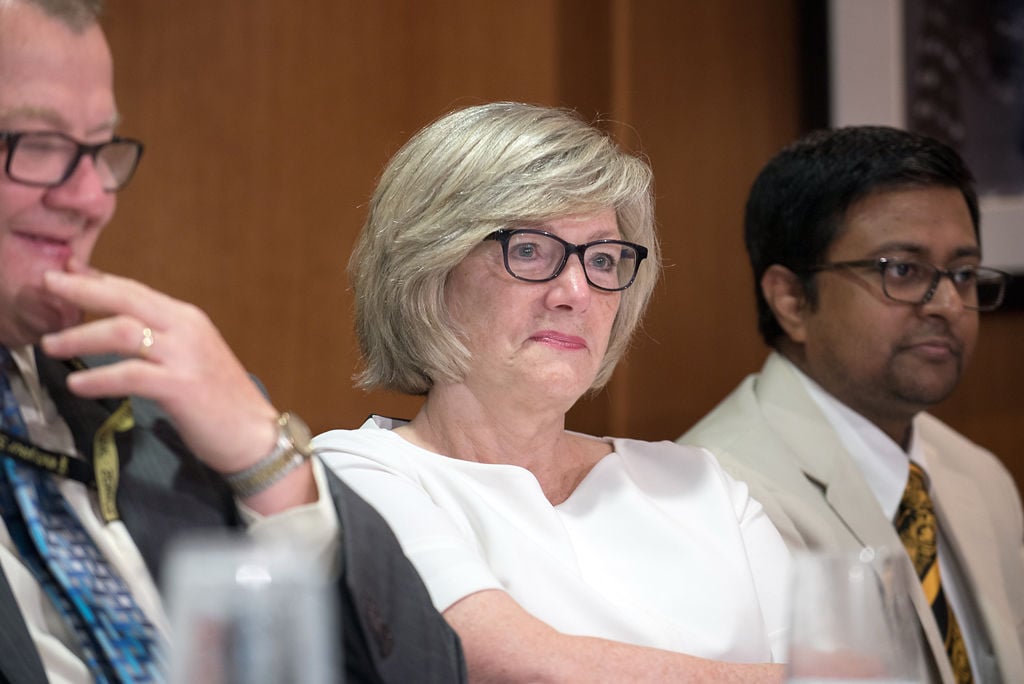 From left to right, Chuck Raasch, Washington correspondent for the St. Louis Post-Dispatch, Barbara Cochran, MU journalism professor for the Washington program, and Danny Al Faruque, a reporter at Informa, listen to Mike Middleton during his speech Tuesday at the National Press Club in Washington, D.C. 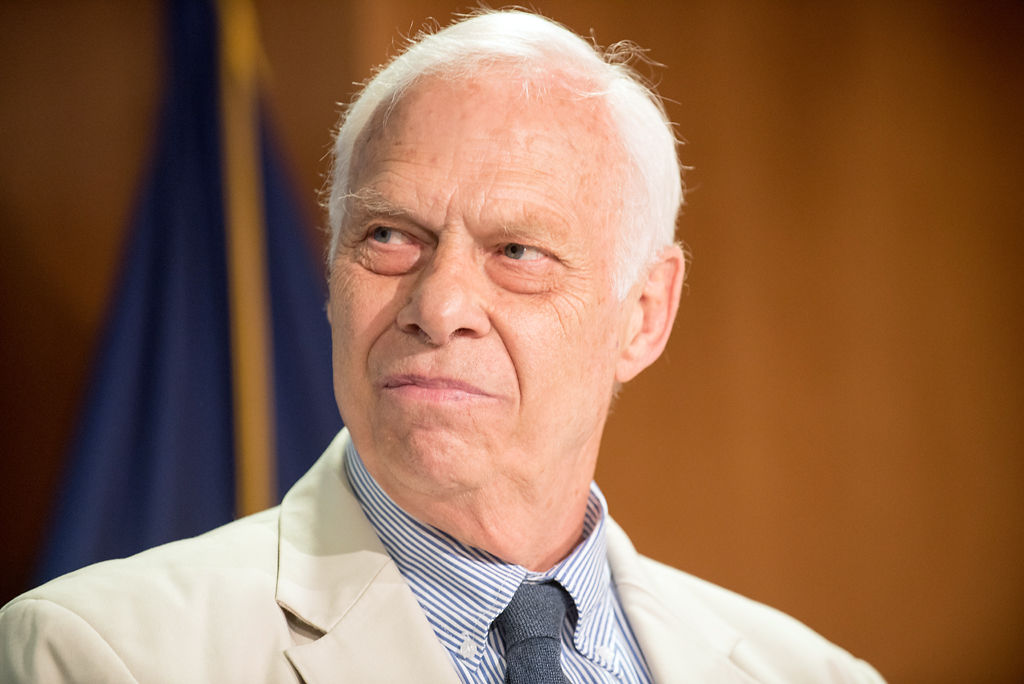 Wes Pippert listens to Mike Middleton's speech Tuesday at the National Press Club in Washington, D.C. Pippert directed the Missouri School of Journalism’s Washington Program from 1989 to 2012 and is currently the Washington Program Director Emeritus.

From left to right, Chuck Raasch, Washington correspondent for the St. Louis Post-Dispatch, Barbara Cochran, MU journalism professor for the Washington program, and Danny Al Faruque, a reporter at Informa, listen to Mike Middleton during his speech Tuesday at the National Press Club in Washington, D.C.

Wes Pippert listens to Mike Middleton's speech Tuesday at the National Press Club in Washington, D.C. Pippert directed the Missouri School of Journalism’s Washington Program from 1989 to 2012 and is currently the Washington Program Director Emeritus.

COLUMBIA — Interim UM System President Michael Middleton had a warning Tuesday morning for other university presidents: Race relations on your campus might not be as healthy as you think.

In a speech at the National Press Club in Washington, D.C., Middleton said most presidents feel that the problems at MU that led to two top administrators' resignations could never happen on their campuses. But that kind of thinking is partly to blame for the "explosion" at MU last fall — a word he used repeatedly throughout his speech.

"The prevailing view was that race relations were good, maybe even excellent, at Mizzou," Middleton said. "But the fact of the matter is that institutionally, leaders were not paying attention, and they got caught."

He said he hoped what happened at MU was a wake-up call for other university leaders and would motivate them to continuously assess their campus climate.

MU students protested a series of racially charged events in the fall 2015 semester, including student body president Payton Head being called the n-word and racial slurs shouted at members of the Legion of Black Collegians.

Wolfe stepped down Nov. 9. Chancellor R. Bowen Loftin, who had been asked to step down by faculty members and nine of MU's deans, resigned hours later.

But there were many factors contributing to last fall's semester of unrest, Middleton emphasized, including the threat to graduate students' health insurance coverage and a feeling that academic freedom was under threat. He said those concerns, combined with racial tensions, created a "perfect storm."

Middleton has some personal experience with campus race relations. In the question-and-answer session after his remarks, he was asked to compare the recent protests and those he participated in as a student at MU in the 1960s as a founding member of the Legion of Black Collegians.

In 1974, the group presented the university with a list of demands to improve race relations, including increased funding for a black culture center and more inclusive hiring practices.

"I think back in the '60s we probably occupied a few buildings and locked the chancellor out of his office one day, but it was pretty much the same techniques," he said.

More than 40 years later, student activist group Concerned Student 1950 included LBC's original list in its demands to administrators. Middleton took on the pressure of trying to meet some of them as the UM System's interim president.

He said the heart of the protests at MU has been similar to those he participated in: students demonstrating frustration with their "lived experience" on campus. Middleton complimented the protesters for adhering to the principles of nonviolent protest very well. He emphasized that there was no violence; no one harmed in last fall's unrest.

But he pointed out some significant differences. Although, he said, he wouldn't describe the current generation of college students as "coddled," they are less willing to put up with microaggressions that have long been targeted toward students of color. He suggested they might not be as resilient as he was, raised in Mississippi in the 1950s and taught to push through prejudice.

Another focus of the questions after Middleton's speech was free speech on campus. He rejected the idea that the First Amendment was being compromised on campus or that MU's School of Journalism could be doing a better job of educating students on free speech.

As for the inevitable subject of former Department of Communication assistant professor Melissa Click, he said he wasn't surprised by the American Association of University Professors' unanimous vote to place MU on its censure list. The organization's vote was based on the UM System Board of Curators' decision to fire her in February after her altercations with student journalists and the police during campus protests.

Middleton said the board's action was necessary because the turmoil would have continued unless something happened with Click.

"I don't think that what the (board) did had anything to do with Dr. Click's academic freedom, and the AAUP couched their sanction in those terms," he said. "They have a job to do themselves, and they did it. We will have to live with it and work to get off the censure list as soon as possible."

Much work remains to be done, Middleton said, focusing specifically on a draft policy on protests and free speech. Middleton said the policy, which is meant to improve clarity about when, where and how students can protest, is too legalistic and needs more work to be more accessible to the public.

Making progress on racial issues takes time, Middleton said. He said he hoped students would be patient with the university. He cited the hiring of Kevin McDonald as the UM System’s chief diversity officer as an example.

"Our biggest flaw as a university is that we are notoriously slow at doing what we do," he said. "My hope is that we can accelerate our pace and that this millennial generation will give us the time to do what we need to do."

The move follows a March investigation into the firing of Melissa Click and informs potential faculty members that a university administration may not guarantee an environment of academic freedom.