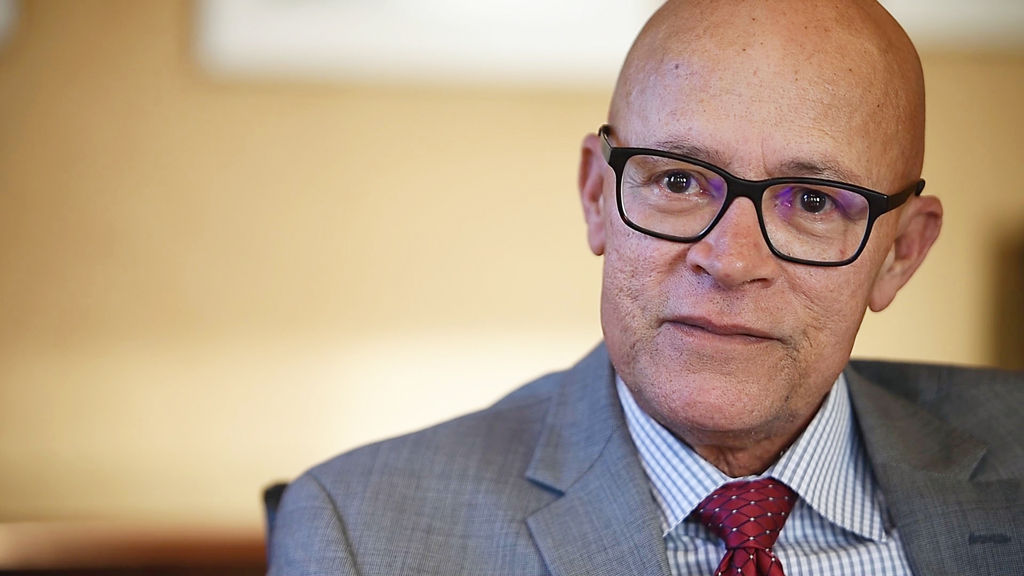 Mike Middleton reflects on his term as UM System interim president during an interview Monday. Middleton looks forward to his second retirement and hopes to spend time with his seven grandchildren and travel to the Caribbean with his wife. 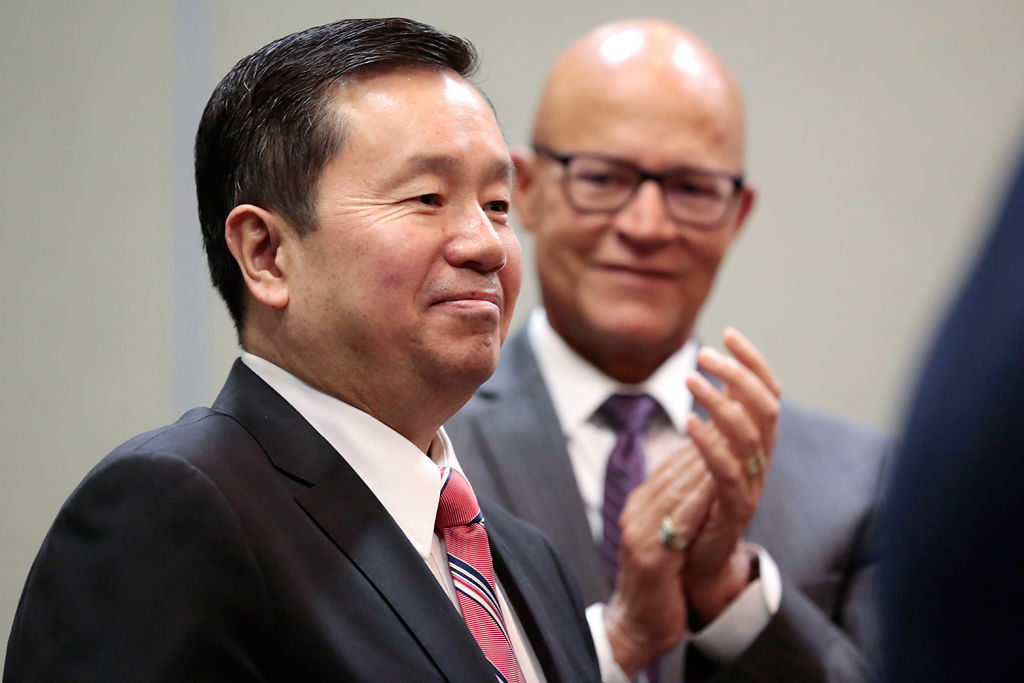 Mike Middleton congratulates Dr. Mun Choi during a University of Missouri System press conference on Nov. 2. The official announcement of Mun Choi as the 24th UM System president was made at the Capitol Plaza Hotel in Jefferson City. 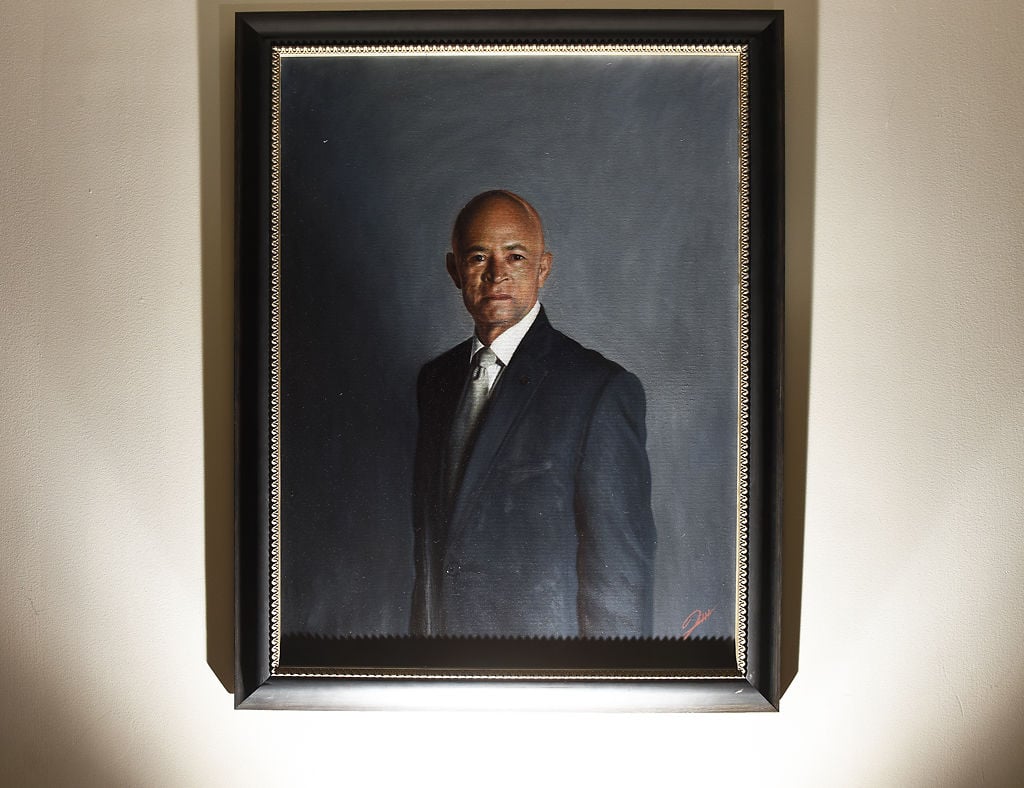 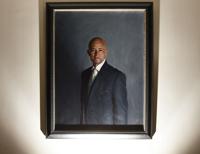 An oil painting of Interim President Michael Middleton hangs on the wall in Hulston Hall. Middleton was appointed University of Missouri's interim president after Timothy Wolfe resigned in November 2015. 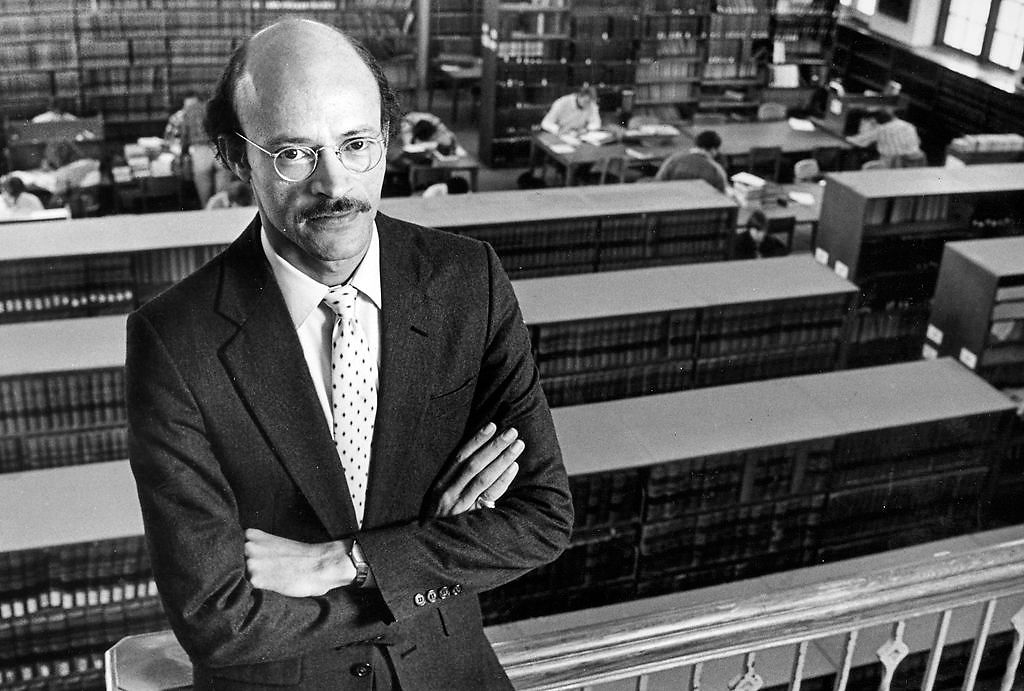 Michael Middleton poses for a portrait in the Tate Hall Law Library in 1986. 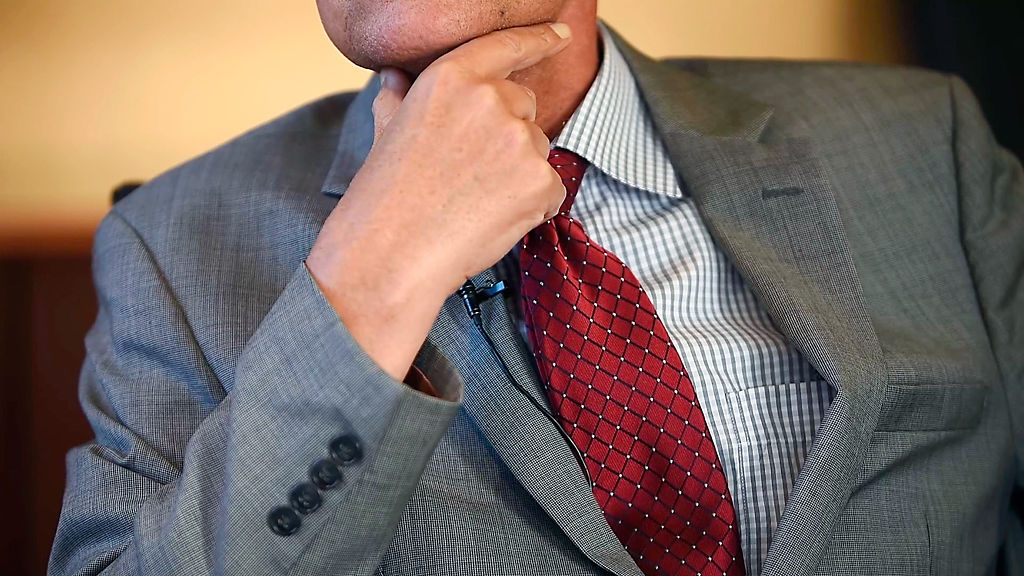 University of Missouri System Interim President Mike Middleton pauses in thought during an interview on Monday, Feb. 27. Middleton officially retired on Tuesday from the university and will be replaced by Dr. Mun Choi.

Mike Middleton reflects on his term as UM System interim president during an interview Monday. Middleton looks forward to his second retirement and hopes to spend time with his seven grandchildren and travel to the Caribbean with his wife.

An oil painting of Interim President Michael Middleton hangs on the wall in Hulston Hall. Middleton was appointed University of Missouri's interim president after Timothy Wolfe resigned in November 2015.

Michael Middleton poses for a portrait in the Tate Hall Law Library in 1986.

University of Missouri System Interim President Mike Middleton pauses in thought during an interview on Monday, Feb. 27. Middleton officially retired on Tuesday from the university and will be replaced by Dr. Mun Choi.

COLUMBIA — What do you do when your university is in trouble?

That’s the question Mike Middleton asked himself in November 2015.

A few months earlier, he had retired from MU, his alma mater, after more than 30 years, first as a law professor and then as deputy chancellor.

That’s when a series of racially charged incidents thrust MU into the national spotlight. Things came to a head when MU graduate student Jonathan Butler started a hunger strike, and the Missouri football team threatened a boycott until then-University of Missouri System President Tim Wolfe was gone.

On Nov. 9, that day came. Wolfe resigned, and the UM System Board of Curators went to Middleton and asked if he would come out of retirement and step in as interim president.

Fifteen months later, the interim is over. Mun Choi, former provost from the University of Connecticut, takes the reins of the UM System on Wednesday.

It was quite a journey for Middleton.

“I retired a happy guy back in August of 2015,” he said. “I had had a great career, and the university pretty much gave it all to me. So I was a bit intimidated about coming back as interim president, but I really had no choice. I mean, what do you do when your university is in trouble, and they ask you to come back and help?”

For the former Department of Justice lawyer, it was trial by fire.

“Once I took the position, it was really like drinking through a fire hose,” Middleton said. “I had been enjoying my retirement, and the pace and the volume of work in this position, it was intense.”

At center stage was a series of demands made by activist group Concerned Student 1950. The list included increasing the percentage of black faculty to 10 percent by the 2017-18 school year and creating a long-term plan to address issues of diversity.

"This university needs to be a place where young, intelligent, thoughtful people can feel free to learn, to interact and to grow,” he said at his introductory press conference in November 2015.

Looking back over his presidency, Middleton sees clear marks of progress toward those goals.

Each of the four campuses now has a diversity, equity and inclusion office, which reports to its respective chancellor, he said.

In May, Middleton announced the launch of an independent audit of the system's diversity and inclusion policies. The audit was completed later in 2016, and a task force appointed to analyze the results made additional recommendations in December.

In September, MU announced a goal of doubling the percentage of faculty of color — which also includes Hispanic, Native American and other minority faculty — from 6.7 percent to 13.4 percent over four years.

The MU Counseling Center has since hired two psychologists of color, another demand from Concerned Student 1950.

Middleton is quick to credit the team around him. He heaped praise on Kevin McDonald, who was brought on as the UM System’s first chief diversity, equity and inclusion officer.

Middleton worked with McDonald to create a framework of “inclusive excellence,” which centralized the diversity work of different college on campus under one department in Jesse Hall.

According to Middleton, that was the easy part.

The real challenge was handling the legislature.

In the wake of the protests and prolonged controversy on how MU should handle a case of former assistant professor Melissa Click, who confronted a student trying to film a protest and called for "muscle" to get him removed, many lawmakers wanted to take action against the UM System.

“When I took the job, they were really threatening to make significant cuts in our base appropriation, sort of as a punishment for allowing the November 2015 issues to explode,” Middleton said.

“It was not easy to go down two or three times a week and be chastised by angry legislators, but that was part of the job.”

In February 2016, for instance, the House Higher Education Appropriations Committee voted to exclude the UM System campuses from a 2 percent statewide increase in performance-based funding.

The committee chairwoman did not mince words.

“It would be one thing if it just made state news, but this is national," Rep. Donna Lichtenegger, R-Jackson, said then. "It has made our university a laughingstock, and I'm trying to make people understand that we are not going to be a laughingstock."

Middleton worked during the spring legislative session to convince lawmakers that punishing the UM System only did harm, not good. It’s an effort he counts among his successes.

The legislature approved a 4 percent performance-funding increase, which did include the system. But lawmakers also cut $3.8 million from UM administration.

What's more, the funding increase only partially offsets an estimated $31.4 million budget gap at MU, which occurred as a result of a steep enrollment drop-off. Estimated fall 2016 enrollment dropped by more than 2,600 from the year before. To make up the rest, the curators approved a tuition increase.

Going forward, Middleton is worried about money. Years of state funding cuts and recent withholdings from former Gov. Jay Nixon and Gov. Eric Greitens have forced the UM System to be more “efficient,” a word Middleton takes issue with.

If trends continue, UM will need to find additional revenue through research or tuition increases. The system might need to look at ways to consolidate services shared by the four campuses and further streamline academics.

UM should "perhaps think seriously about what we are as a university," he said. "We can no longer be everything to everybody."

Finding additional revenue is at the top of the agenda, he said. Starting Wednesday, that responsibility falls to Choi.

For Middleton, who turned 70 on Feb. 25, the legacy he hopes he leaves behind is one of fighting for justice and bringing calm to a university inflamed.

“Frankly, I spent a lot of time working after I hired Kevin (McDonald) on what the board asked me to do, which was to calm the waters of this university," he said. "I mean, people were bad shape when I took this job. To restore trust in the university to restore confidence in the university. ... And if you look at the record, we did a pretty good job at that.”

His role wasn't to launch any major university initiatives, Middleton said, but to settle a volatile campus environment and leave a strong foundation for Choi to build upon. He prides himself on having done that.

Now he’s going to enjoy his retirement — for real this time.

He and his wife, Julie, hope to travel in the Caribbean. He has grandchildren in Kansas City and Atlanta he’s eager to visit. And he’d like to work on his golf game.

Middleton does plan to stay involved with the new administration, at least for a little while. Choi asked if he would work with him at the start, and Middleton was happy to oblige. He’s confident the university is in capable hands.

“I think Dr. Choi will last a long, long time,” Middleton said. “He's a great guy — smart, energetic and very, very eager to take this university to the next level. And I think he has all that it takes to do that.”

But for now, some time to himself would suit Middleton nicely. “I'm gonna rest for about a week, and then see what Dr. Choi needs me to do.”

At the announcement for his appointment, the former MU deputy chancellor said racism and discrimination is "centuries old, and this problem is going to take years to solve — if it can be solved. ... I think we’re at an opportune moment to take some giant steps forward to move this issue far beyond where it has been moved in the past, and I’m committed to doing that."