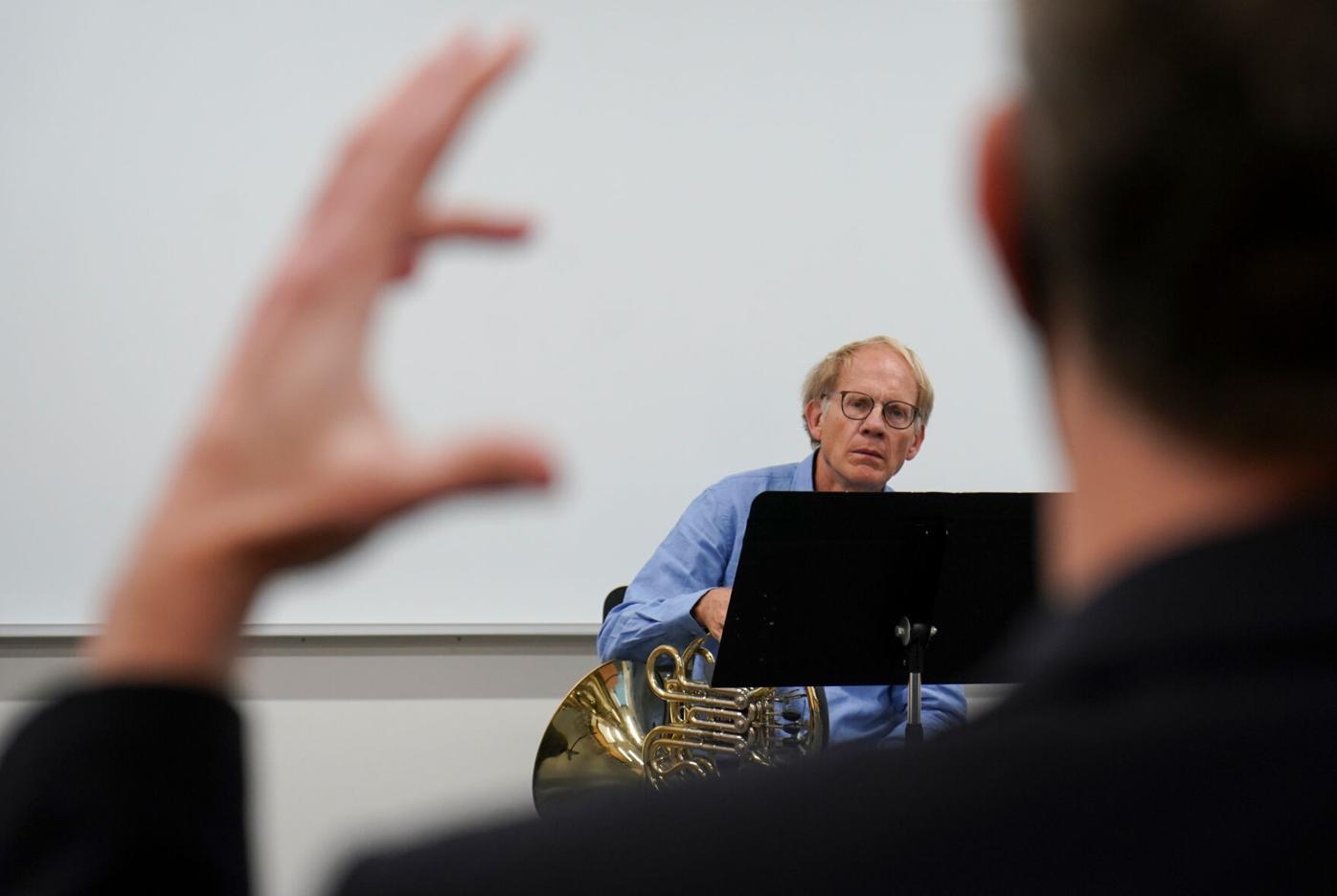 Roger Kaza, center, and Stefan Freund discuss Freund’s composition “Voyageur Fantasy” on Oct. 20 at the Sinquefield Music Center in Columbia. Freund wrote the piece for Kaza, who will perform during its premiere Friday with the St. Louis Symphony Orchestra. 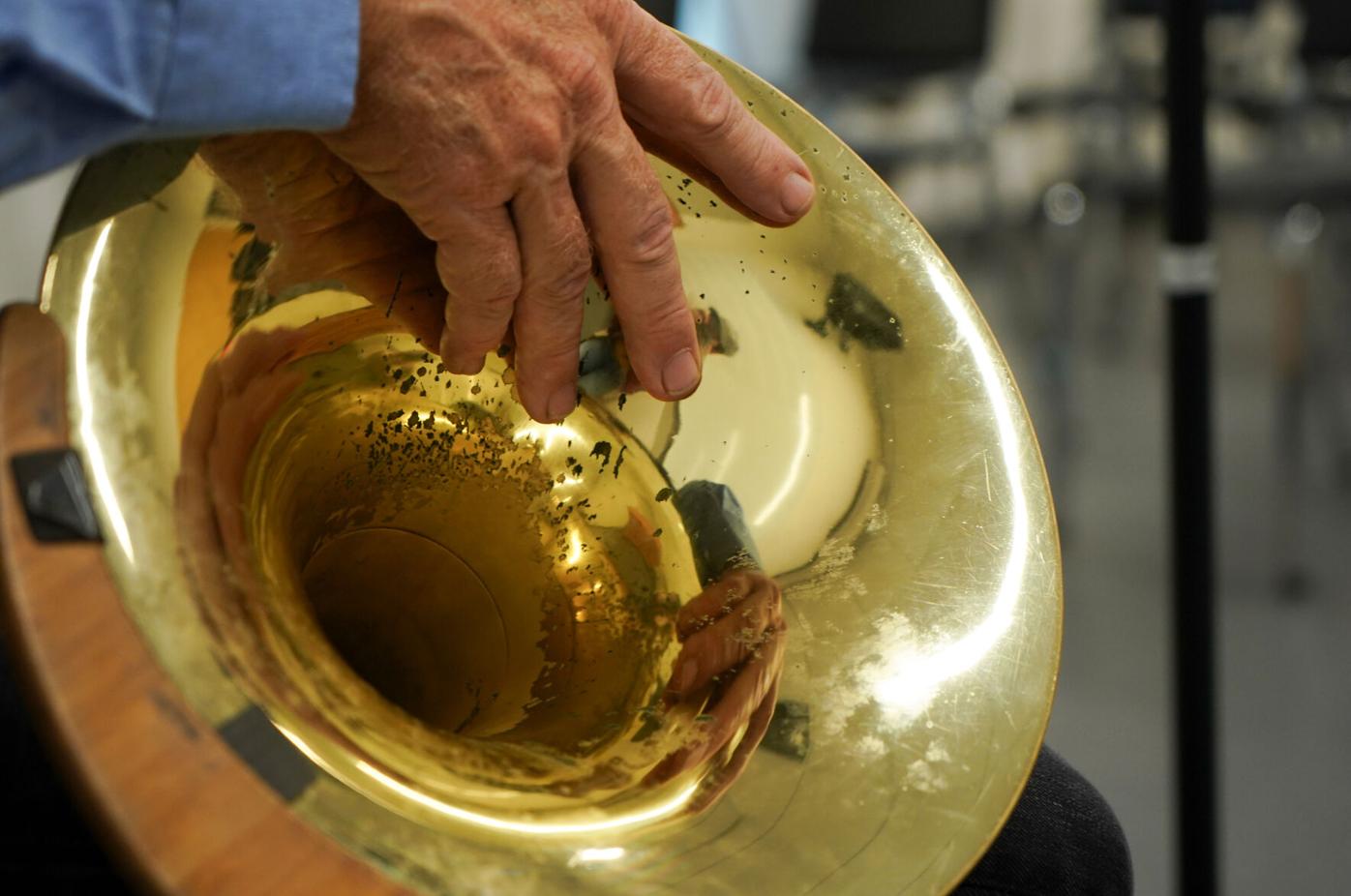 Roger Kaza rests his hand on the bell of his horn Oct. 20 at the Sinquefield Music Center in Columbia. Even after decades of playing, Kaza still finds himself delighted at what the horn can do. 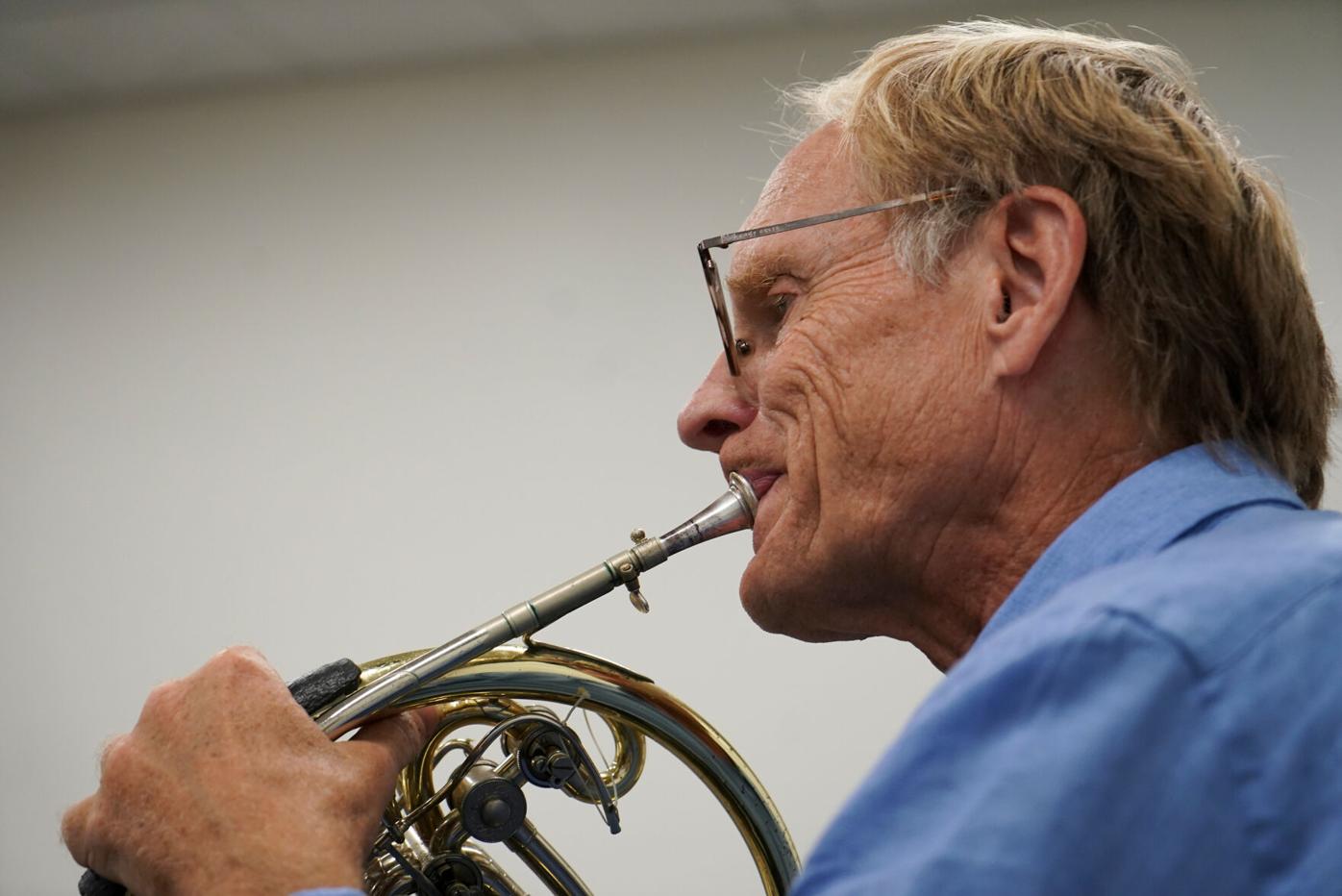 Roger Kaza plays through Stefan Freund’s “Voyageur Fantasy” for the first time Oct. 20 at the Sinquefield Music Center in Columbia. Kaza has been the principal hornist of the St. Louis Symphony since 2009.

LEFT: Roger Kaza reaches for a pencil clipped into the slide of his French horn on Oct. 20. Kaza pitched the idea of a horn-led piece celebrating the bicentennial after a suggestion from his girlfriend. RIGHT: Kaza notates his copy of “Voyageur Fantasy.” During this initial run-through, Kaza and Freund gave each other feedback and made rhythmic and dynamic changes to the composition. 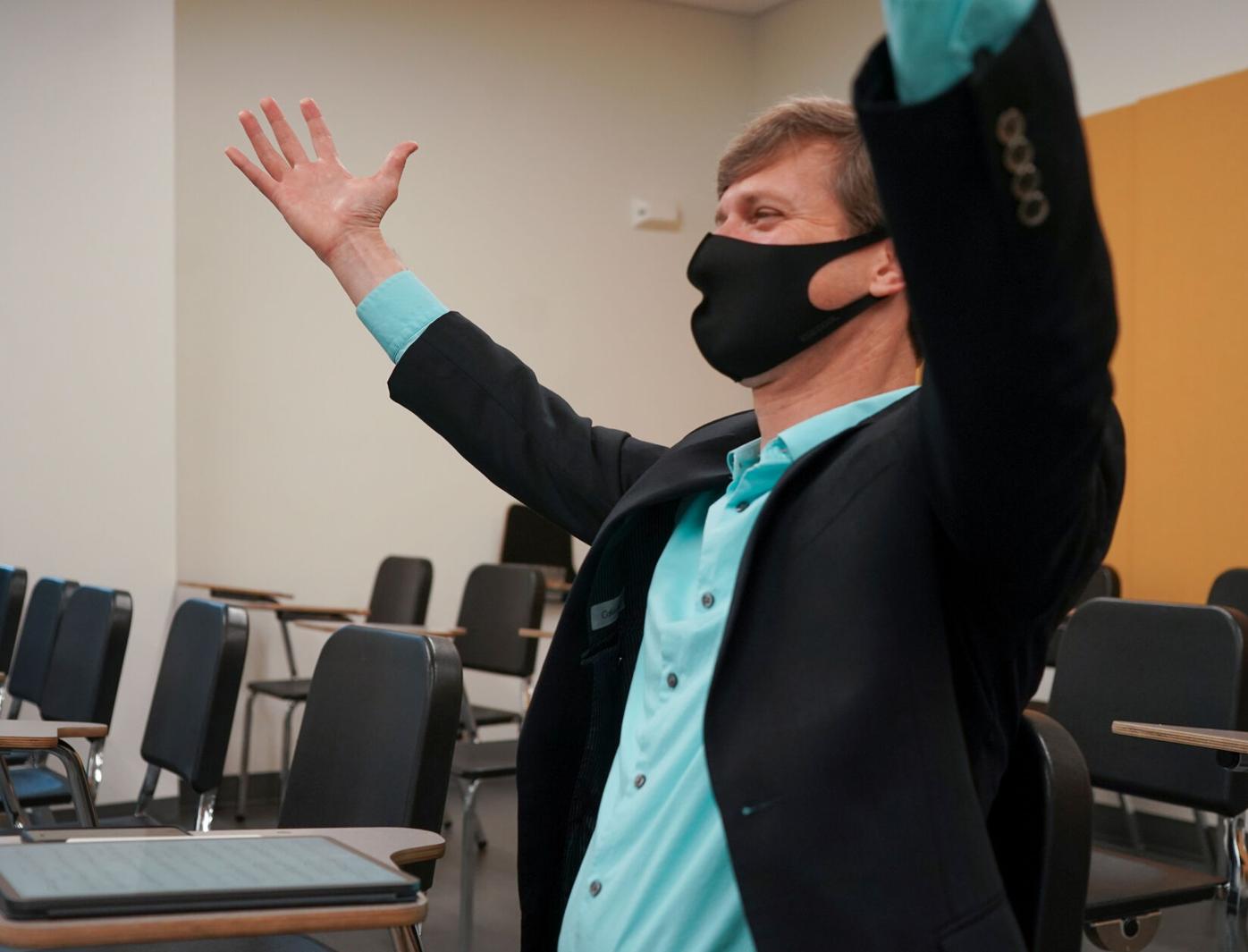 Stefan Freund illustrates the intended energy of a particular section of his composition “Voyageur Fantasy” on Oct. 20 at the Sinquefield Music Center. Freund, who grew up in Memphis along the Mississippi River, has expressed the impact of rivers on history and culture in many of his prior works.

MU composer Stefan Freund has no interest in camping anymore.

“I always say I don’t go camping because I work too hard to sleep on the ground,” he joked.

But Freund has had enough experience to know what it’s like to wake up in the morning freezing because the fires have gone out. Those memories served him as he conceived the opening of his latest composition, “Voyageur Fantasy” for horn and orchestra.

Voyageurs were French Canadians who transported fur by river during the height of the North American fur trade in the 18th and 19th centuries. They spent their days on big rivers like the Missouri and the Mississippi, paddling almost constantly from dawn to dusk and singing much of the time in a rhythm that matched their paddle strokes.

“It was just this zen life zone they were in to get the work done,” said Roger Kaza, principal hornist of the St. Louis Symphony Orchestra. “Voyageur Fantasy” was commissioned by the SLSO and written for Kaza, who will be the featured soloist when the piece premieres Friday in the orchestra’s two New Year’s Eve concerts at Powell Hall in St. Louis.

The opening of the piece invites imagination: The voyageurs awaken cold, groggy and moving slowly. Mist comes up from the river. In the dreamy, gray light before dawn, the men look ahead to their day of little else but paddling, singing and smoke breaks — called pipes, Kaza said, because they blew out their pipes before lighting up again. He said he has been interested in the history of the fur trade for decades.

Momentum builds steadily after that in “Voyageur Fantasy.”

“I’ve always loved pieces that work that way,” said Freund, a professor of composition in the School of Music. “I love the idea that in music, we can use time and growth to illustrate this idea of things emerging, coming together, developing.”

The idea for the commission came when Kaza was visiting his girlfriend, children’s book author Kate Klise, at her home in the Ozarks. He picked up a little magazine put out by her electric co-op.

“That’s where I saw this article on the bicentennial. I said, ‘Well, that’s interesting.’ ” They got to talking, and Klise suggested a piece about the bicentennial that featured Kaza as the soloist.

He didn’t take it seriously at first, but Klise kept raising the idea, and finally Kaza suggested it to the orchestra’s leadership. In his proposal, he laid out the many musical influences that shaped Missouri in the sweep of time before and after it became the 24th state, in 1821: Native American music, Civil War tunes, ragtime, jazz, Ozark bluegrass, rock ’n’ roll — and the canoe songs of the French-Canadian voyageurs.

The commission to write the piece went to Freund. He said that early in the process, he, Kaza and Stéphane Denève, music director of the St. Louis Symphony Orchestra, noted that the voyageur songs were probably some of the first Western music heard on the shores of the Mississippi and Missouri rivers and in the territory.

He decided to build the piece around the voyageur canoe song “C’est L’aviron,” a French tune known in English as “Pull on the Oars.”

The river remains a constant character throughout the 12-minute “Voyageur Fantasy,” and that’s appropriate for both the composer and the soloist. Freund grew up in Memphis, where the Mississippi River was a huge part of the development of the city and its culture.

“Here in Missouri,” he said, “I believe we can feel the presence of the rivers around us and their impact on the history of our state.”

It’s a theme that has come up in Freund’s previous works, including “con/influences,” which he wrote for the 250th anniversary of the founding of St. Louis, and a piece he wrote earlier this year, “Waterways,” another celebration of the bicentennial.

Kaza, meanwhile, is a native Oregonian and a whitewater rafter. He wrote in a recently submitted commentary to the St. Louis Post-Dispatch that during the pandemic: “I spent more time on Missouri’s waterways than I have in the 24 previous years I’ve lived here. I explored Ozark streams by kayak. I rafted the Missouri River with a group of friends and fellow musicians. I even swam in a spring-fed Ozark pond.

“And every day, I played my French horn,” he concluded. “Water and music sustained me, just as they did the French voyageurs 200 years ago.”

Kaza joined the St. Louis Symphony Orchestra as principal hornist in 2009. The son of musicians, he wanted to be a pianist, but when he was in the fifth grade his parents took him to a music store to try out the horn. At the time, he didn’t know what one was.

“It was my mother’s idea. She was a big Mahler fan,” Kaza said. Even after 50 years of playing the horn, he continues to be interested in the things the instrument can do.

In “Voyageur Fantasy,” Kaza especially likes a passage that is “half-stopped,” a muted effect created by the placement of the hand in the instrument’s bell.

The half-stopped sound is veiled and distant, and the way Freund has scored it, few other instruments play there. “The audience will lean in and listen, and that’s what we want,” Kaza said.

For Freund, it is the most personal part of the piece. As a founding cellist of the new music ensemble Alarm Will Sound, he played with hornist Matt Marks for years. They were good friends, and they had all kinds of inside jokes. One was about Freund’s use — overuse in Marks’ view — of the half-stopped technique in horn parts.

“He absolutely hated it, and he complained about it, and I would always put it there just to drive him nuts,” Freund said.

Elizabeth Brixey is a city editor at the Columbia Missourian. She oversees coverage of education.

Tickets and other information: Tickets range from $45 to $110. Audience members 12 and older must be fully vaccinated against COVID-19 or present a negative test result done within 48 hours. More information on the concerts can be found on the website or by calling the box office at (314) 534-1700.