COLUMBIA — Twenty-six members of MU’s English Department voted no confidence in the leadership of Chancellor R. Bowen Loftin in a department meeting Tuesday afternoon. Two members abstained from the vote, but no members voted confidence in Loftin's leadership.

"While we recognize Chancellor Loftin’s service, his twenty-one month tenure has been marked by dereliction of duty in maintaining the quality and reputation of graduate education, violations of the bedrock principle of shared governance and failure to defend the University’s educational mission against outside political pressure," the letter read.

The letter was sent in an email to University of Missouri System President Tim Wolfe and the UM System Board of Curators on Wednesday morning by Samuel Cohen, associate professor in the English Department and faculty fellow in the Office of Graduate Studies. Cohen initially suggested the no confidence vote in October.

"I proposed it to the department during a discussion about the cut in tuition waivers for 0.25 students," Cohen said. "I think we had an email discussion prior to and after meetings about it and I said, 'You know, I think we should talk about this.'" 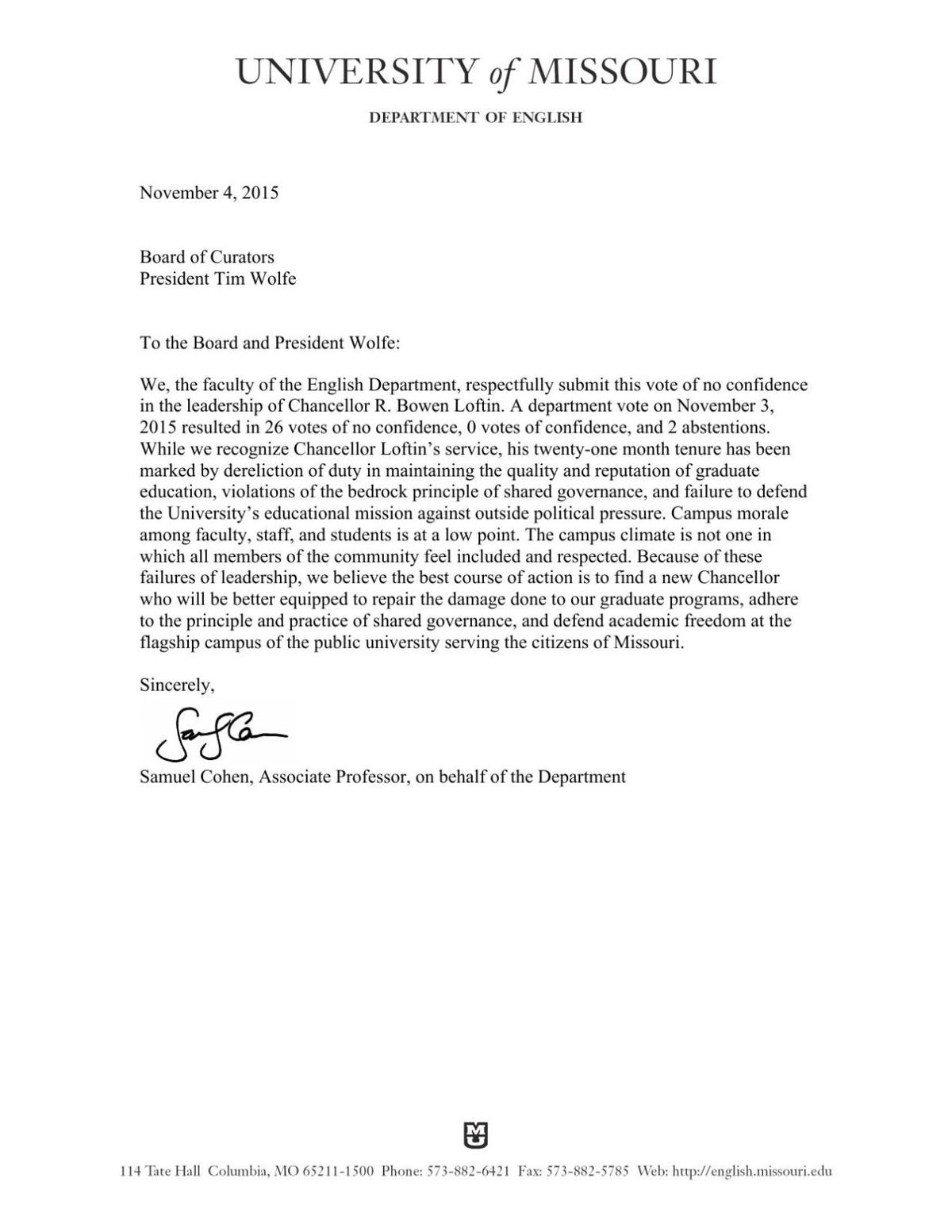 The revocation of full tuition waivers for graduate student employees with quarter-time assistantships — who work for the university about 10 hours a week — is one of the primary concerns of William Kerwin, an associate professor and director of graduate studies in the English Department.

Kerwin said Loftin gave lip service to the issue, among others, at a general faculty meeting but has not addressed it.

"He is not responding to this outcry about what is a terrible injustice," Kerwin said. "It suggests he doesn’t understand what goes on in the departments and what the needs of the students are."

He said the current administration is getting in the way of the university's potential, undermining and dismantling it.

"We (stood up) because we feel like we haven’t been listened to and that we have been treated poorly, and by we I mean the broader university community — graduate students, minorities, all sorts of people are suffering under this administration," Kerwin said.

Last month, about 300 faculty in the School of Medicine took an informal survey about the abrupt resignation of the school’s dean, Patrice Delafontaine. The survey included language that reflected some concerns about Delafontaine's departure, such as "forced resignation," and exhibited a distrust of the chancellor and in his ability to lead the university.

Loftin has been the lightning rod for many of the issues that have been brought forward by faculty, staff and students this year, including graduate student employee rights, race relations on campus, the cancellation of Planned Parenthood contracts, the restructuring of academic departments and Delafontaine's resignation.

"Fiasco after fiasco … it just never stops," Kerwin said of the contentious issues popping up around the university. "It isn’t one thing; it’s a constellation of things."

Loftin has been cited by some faculty, staff and students for a lack of transparency and cooperation in decision-making, for his slow response time to major issues and for bowing to outside political pressures.

"Because of these failures of leadership, we believe the best course of action is to find a new Chancellor who will be better equipped to repair the damage done to our graduate program, adhere to the principle and practice of shared governance, and defend academic freedom at the flagship campus of the public university serving the citizens of Missouri," the English Department's letter concluded.

Cohen sent the letter to about 22 other university departments and programs, he said, in hopes that the English Department’s statement will encourage others to come forward with their opinions and frustrations. Although he had been in communication with other departments and programs about the university's leadership, he did not want to say which were considering taking the same action. He said some departments have been quiet about their frustrations, for fear of repercussions.

"I know there have been discussions. … A lot of departments are talking about it, and many of them expressed a reluctance to stick out their necks, which I totally understand," Cohen said. "Hopefully this will help them."

Wolfe, the UM System president, has also been the focus of much discussion, especially after the announcement Monday that graduate student and campus activist Jonathan Bulter would engage in a hunger strike until his demands — including Wolfe's removal from office — were met.

Also standing up to administrators, the MU Graduate Professional Council held a vote Tuesday evening at its General Assembly. The vote was to pass a resolution showing the council stands in solidarity with those who are fighting for social justice causes at the university. The resolution had no reference to Loftin but cited Wolfe a number of times for failing to speak up during recent protests and announcements.

One part of the letter included references to Wolfe’s "... continued negligence towards the racism, homophobia, sexism, labor exploitation, and other issues at this university."

"GPC has had the question asked of them by one administrator, 'Why is this a GPC issue?' and that’s what we want to combat," GPC treasurer Alex Howe said. "This is all part of the social justice movement, and these aren’t individual, isolated issues. These are all facets of the same thing."

GPC vice president Rachel Bauer said members of student organizations who have spoken to administrators about university issues and concerns were directed by those administrators to their elected student representatives such as GPC and the Missouri Students Association.

"What this is really showing is that we’re standing in solidarity," Bauer said of the resolution. "And we’re showing the administration that we are not going to allow them to talk to us all individually anymore because if it's a student issue, it's a GPC issue."

To Kerwin, the best-case scenario is for university administrators to start listening to faculty and students and be active in making positive changes that align the university with its true values. The worst-case scenario, he said, would be for the university to continue as it is, straying from its values and purpose.

"Our primary mission is to promote thoughtful, creative and empowered citizens," Kerwin said. "We are here for the citizens of Missouri, and they have had a world-class university, and it's being dismantled. … It’s time for that to be questioned in a variety of venues including the role of the chancellor."

Jonathan Butler, a graduate student at MU, made the decision to go on a hunger strike a couple of days after the Homecoming Parade, and he has been preparing his body over the last two weeks.