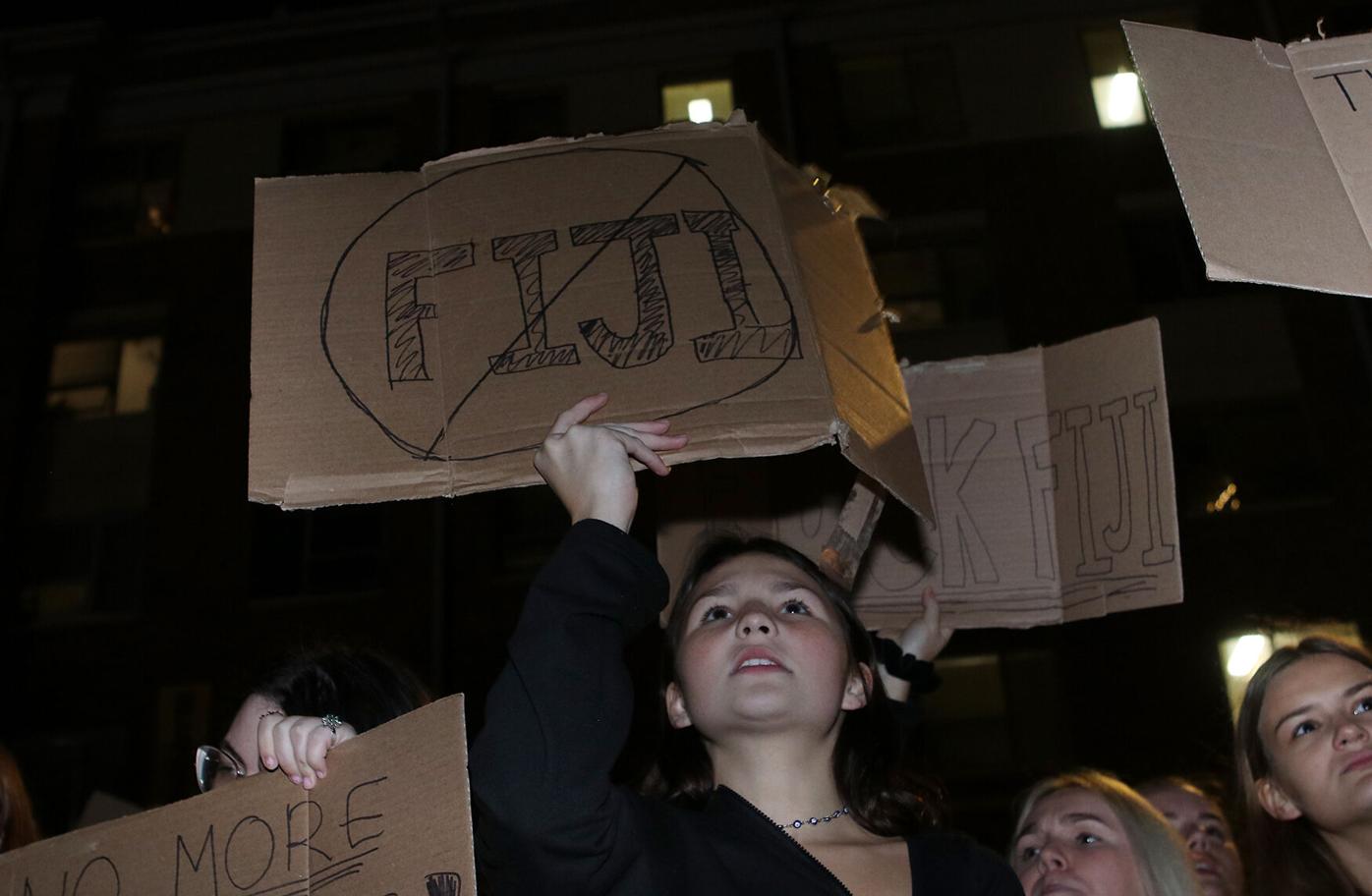 MU junior Eleanor Wilson holds up a sign with a cross through the word “Fiji” on Wednesday night outside the Phi Gamma Delta fraternity house at 507 Kentucky Blvd. in Columbia. The protest, which started around 9 p.m., drew a large crowd. Another student, Briana Hagle, participated after receiving an MU email detailing hazing practices that sent a student to the hospital. “We’re mad at MUPD, too, because if they’d done something earlier about dangerous frat practices, this wouldn’t have happened,” Hagle said. 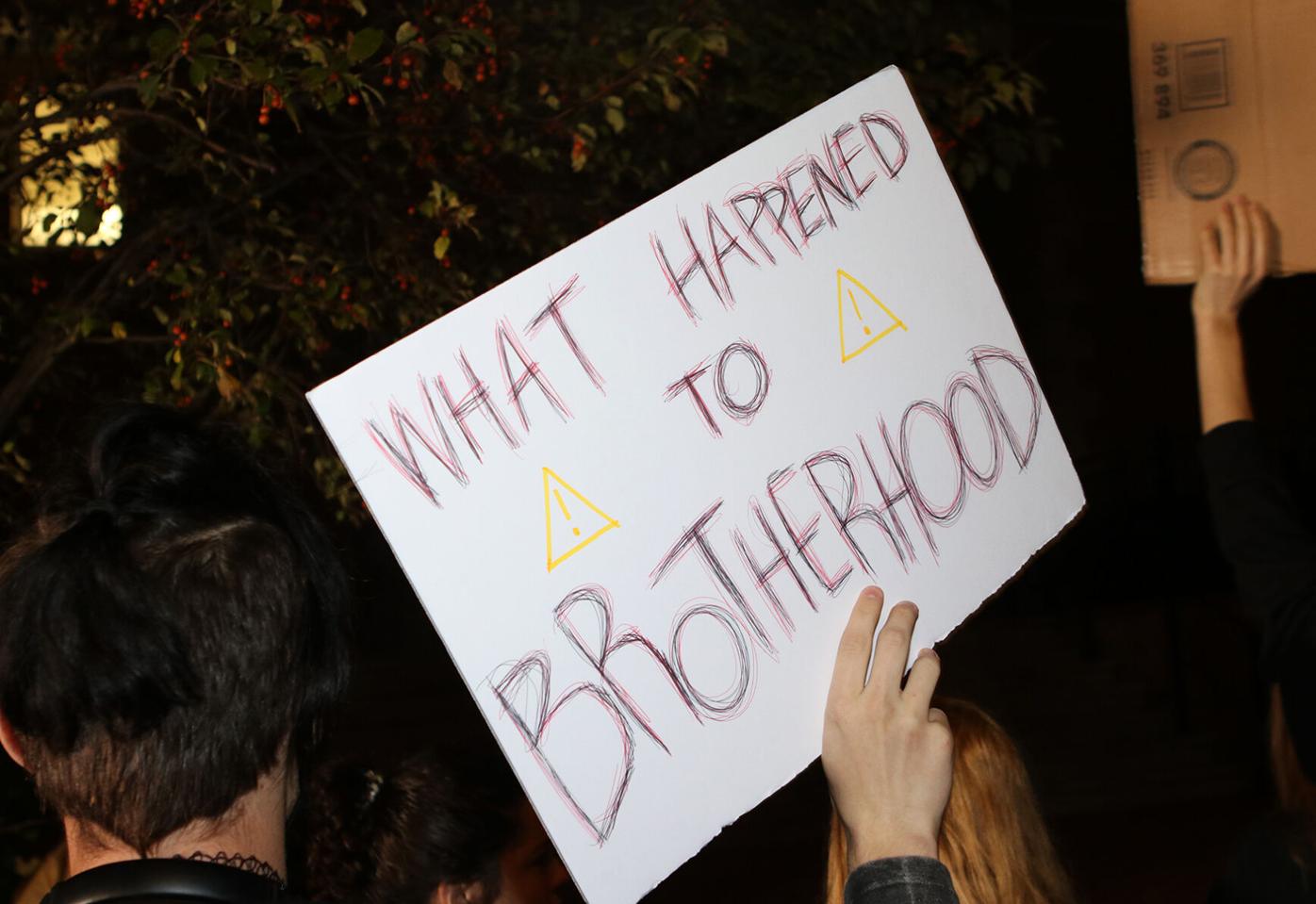 Kane Kruse, a freshman at Missouri, holds up a sign reading “what happened to brotherhood” Wednesday in Columbia. Kruse said he was “not expecting this kind of campus” when he decided to go to MU. 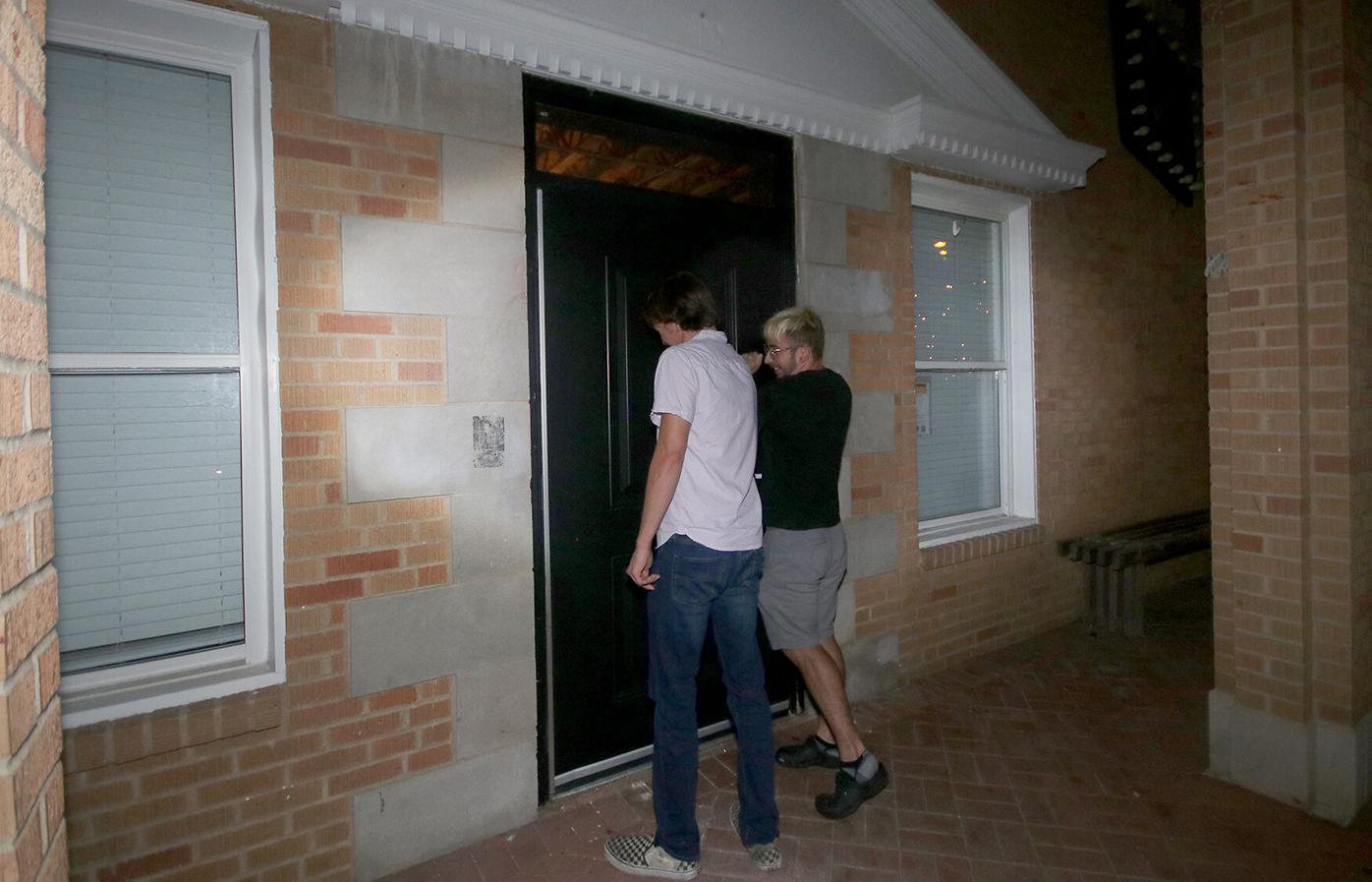 Protesters bang on the door of the Phi Gamma Delta fraternity Wednesday in Columbia. A freshman found unresponsive at a fraternity house was hospitalized amid concerns about alcohol poisoning. 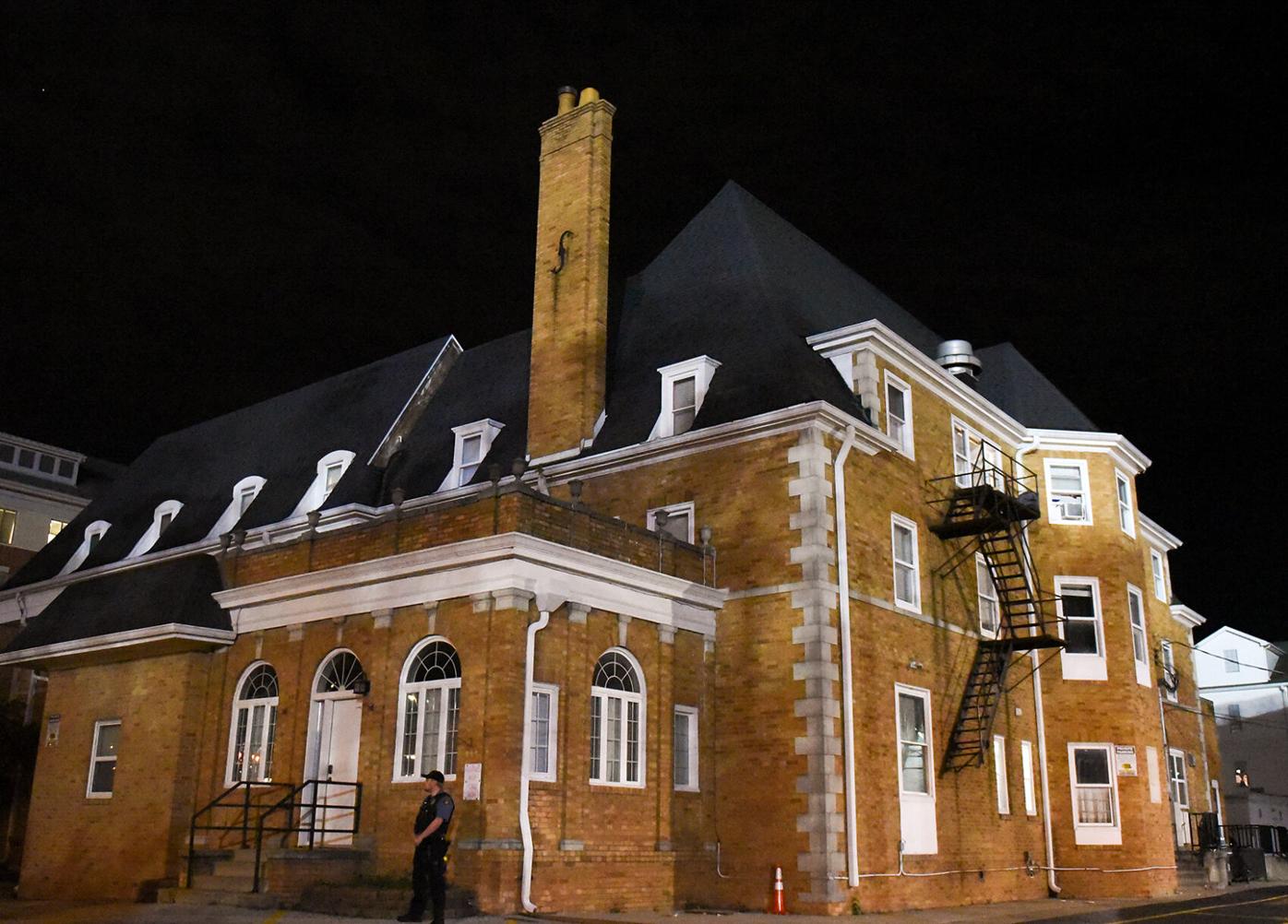 A police officer stands at the corner of the Phi Gamma Delta fraternity house, 507 Kentucky Blvd., on Wednesday in Columbia. The police monitored the area as people protested outside the house for more than an hour. 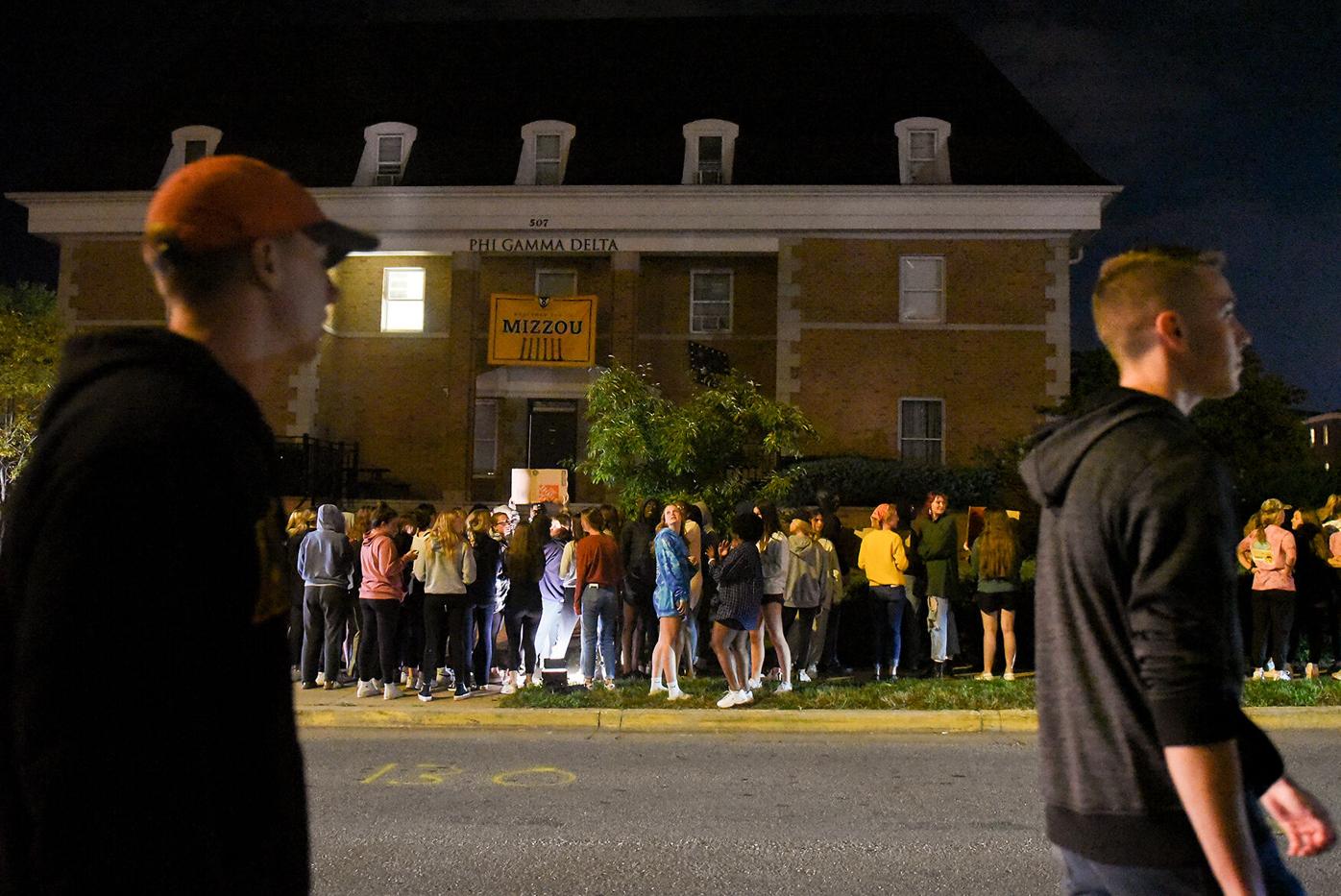 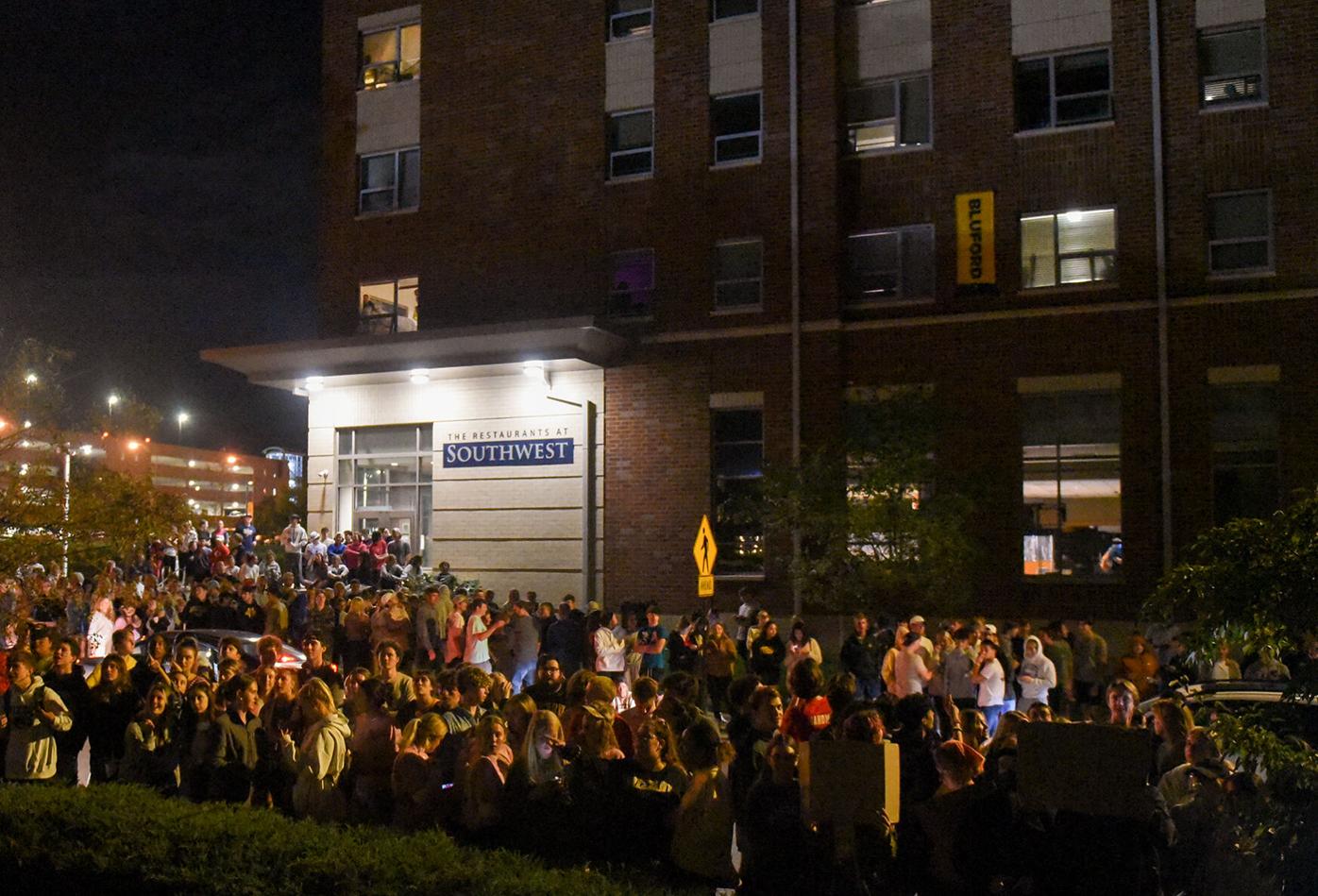 MU students stand outside Phi Gamma Delta, 507 Kentucky Blvd., hours after university officials announced the suspension of fraternity events Wednesday. The decision was made after a freshman was hospitalized for alcohol poisoning at a fraternity social event. 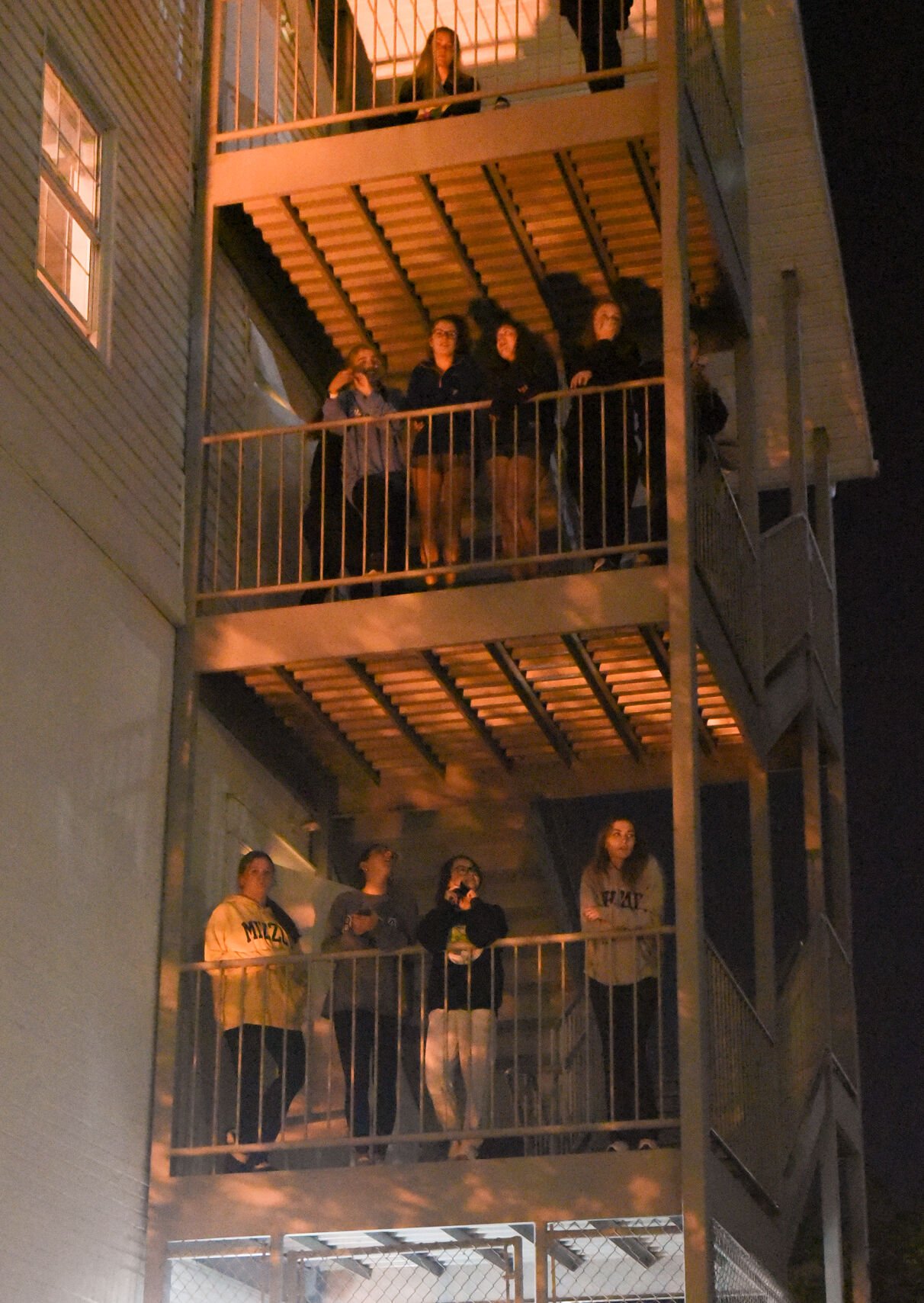 All fraternity activities at MU, including social events, were halted indefinitely Wednesday after a freshman was taken to the hospital amid concerns about alcohol poisoning.

The decision was made by the Interfraternity Council in conjunction with university administration.

All MU fraternity activities are suspended, but many students feel the punishment was too late.

“This is a situation that we — the university and IFC together — felt we had to address immediately,” MU spokesperson Christian Basi said.

The ban on activities was announced after a freshman was found unresponsive early Wednesday during a party at a fraternity house. The fraternity, Phi Gamma Delta, has been suspended both by the university and the national organization.

Citing HIPAA, Basi said he could not disclose the condition of the hospitalized student.

A crowd of roughly 200 people gathered late Wednesday outside the Phi Gamma Delta house. Some led chants such as “Stop the hazing. We want justice.”

“Hazing has gone on for too long, and it shouldn’t take someone almost dying for the university to do something about it,” one student, Olivia Sommer, said.

Another student, Miranda Thein, said, “There needs to be real institutional change in Greek life.”

The MU Police Department and the Office of Student Accountability and Support are both investigating to determine if any criminal statutes or university regulations were violated.

The campus community was alerted to the situation through an email sent shortly before 6 p.m. by Bill Stackman, vice chancellor for student affairs at MU.

Stackman said the incident and other recent events are prompting the university to conduct a thorough review of the Greek system, including the methods put in place to ensure safety at fraternity events. No fraternity activities, including university-sanctioned activities, will be allowed while the investigation is underway.

It is not certain how long the ban will last.

“We have not set a timeline on it,” Basi said. “We want to make sure that we give the investigation and the review the appropriate amount of time.”

The university will hold anyone accountable who is found to have willfully ignored or violated university regulations, Stackman said in the email, and they could face criminal charges.

Based on the initial investigation, several members of the Phi Gamma Delta fraternity are believed to have consumed significant amounts of alcohol during a party at the fraternity.

“The safety of our community is our highest priority,” Stackman said. “When we learn about incidents that threaten student safety, we use all of our resources to investigate and hold accountable those responsible of violating university rules and laws.”

Conner Sibley, president of IFC and an MU senior, said the council “stands in agreement with the actions taken by the university.”

“When we learned of what happened, the Interfraternity Council (IFC) Executive Board unanimously voted to support the decision to halt all fraternity activities,” Sibley said. “Nothing is more important than the safety of the Mizzou community.”

The announcement comes after several reports of drugged drinks at local bars and fraternity events.

History of fraternity incidents at MU

The potential end on the ban has one student leader concerned that the punishment was not enough.