COLUMBIA — The number of MU School of Medicine students who have reported experiencing gender discrimination is twice as high as the national average.

Student mistreatment is only one area the medical school must address within two years to maintain its accreditation, according to a June report by the Liaison Committee on Medical Education, which accredits medical degree programs.

The school was deemed noncompliant in the areas of diversity programs, student mistreatment, curricular management and affiliation agreements, according to a 497-page report obtained by the Missourian through a Sunshine Law request.

The committee also determined that the school needs monitoring in the areas of leadership, strategic planning, student observations, building renovations and assessments.

In a written statement about the report, Medical School Dean Patrice Delafontaine said the school had already been aware of many of the issues before the report was created and that he is immensely proud of the school for receiving full accreditation.

"We take the LCME's recommendations very seriously," Delafontaine said. "To that end, we have assembled a task force comprised of medical students, faculty and staff that is dedicated to continuous quality improvement in general, as well as to making specific quality improvements cited in the survey."

Delafontaine was unavailable to talk about the report until the first week of October, a spokeswoman for MU Health said.

The committee visited the medical school in January and met with administrators, faculty and students to gather information.

The members found that School of Medicine students experience gender discrimination, public humiliation and offensive remarks far more frequently than the national average, according to the report:

Students' specific examples of mistreatment were redacted from the report by the university.

MU Health spokeswoman Diamond Dixon said the school was aware of the complaints and is encouraging students to report incidents.

"The medical students' concerns about treatment by faculty and the learning environment have been an issue that has been taken seriously," Dixon said.

The medical school created the Committee on Civility and Respect in the Learning Environment last fall to review mistreatment reports. The committee will make an annual report of its activities and share it with the dean, faculty and students, Dixon said.

The report also noted that the school doesn't have a specific code of professional conduct for faculty-student relationships and uses the general university policy instead. Students and residents said they weren’t aware of any standards for these relationships, according to the report.

The committee also expressed concern about the medical school's lack of diversity among faculty and students, which isn't a new problem.

When the committee evaluated the school in 2008 and granted it full accreditation, the school was deemed non-compliant in diversity. There were no black students in the first-year class, no strategic plan for diversity and no administrator in charge of the issue.

In response, the school hired a senior associate dean for diversity and inclusion to focus on recruiting and retaining diverse students and faculty. The number of black and Hispanic faculty has increased since then.

However, the number of black students in the medical school has dropped from 5 to 3.3 percent. Over a third of students said they weren't satisfied with the school's student diversity, according to the report.

The few black students in the school often face challenges and racism, according to previous Missourian reporting.

Ontario "Terry" Lacey, the only black man in his School of Medicine class, told the Missourian in 2014 that he was insulted in the school for his appearance, clothing and body language. He said he didn't believe white America was ready to have black physicians.

"They perceive me one way, and that's totally different than what I do," Lacey said.

Overall, the committee determined that the school's diversity was unsatisfactory because of the longevity of the diversity problem and lack of progress.

"While efforts are being made, the School of Medicine has yet to deal with the barriers that inhibit the enrollment of students and the hiring of faculty in the full range of diversity that the school seeks in order to maintain a quality learning environment," the report states.

Neurology, pharmacology and anatomy instruction in the school have been problems since 2008, according to the report. All three remain problematic for different reasons, the new report says.

The committee said students identified the length of the two-week neurology clerkship program as inadequate. The school said it would make the program four weeks long instead.

Eight years later, the program is still two weeks long because there aren’t enough faculty. According to the report, the lack of improvement indicates an ineffective curriculum management system.

"The absence of improvement in these courses suggests inadequate authority or resources or both," the report reads.

Medical schools are required to have written agreements with the facilities that they work with for students' clinical experiences, and the report found that some of MU's were inadequate.

Information was missing in the agreements with Mercy Hospital St. Louis, Mosaic Life Care and Freeman Health System-Joplin, according to the report. The school didn't give sufficient details on the affiliates' learning environment and faculty appointments, among other areas.

The school also did not provide an affiliation agreement for MU Health Care, which is run by the UM System.

MU's medical school has received citations in the past. In 2009, the Accreditation Council for Graduate Medical Education, which accredits medical schools' residency and fellowship programs, put the school on probation.

The council was concerned about the number of hours medical residents were working, according to previous Missourian reporting.

The school made changes in the management and oversight of the residency program, and the probation status was lifted nine months later.

Delafontaine must submit an action plan to the committee by Dec. 1, including a letter and detailed list of the steps that will be taken for each element. Dixon said Delafontaine hadn't yet met with the committee for a required consultation. 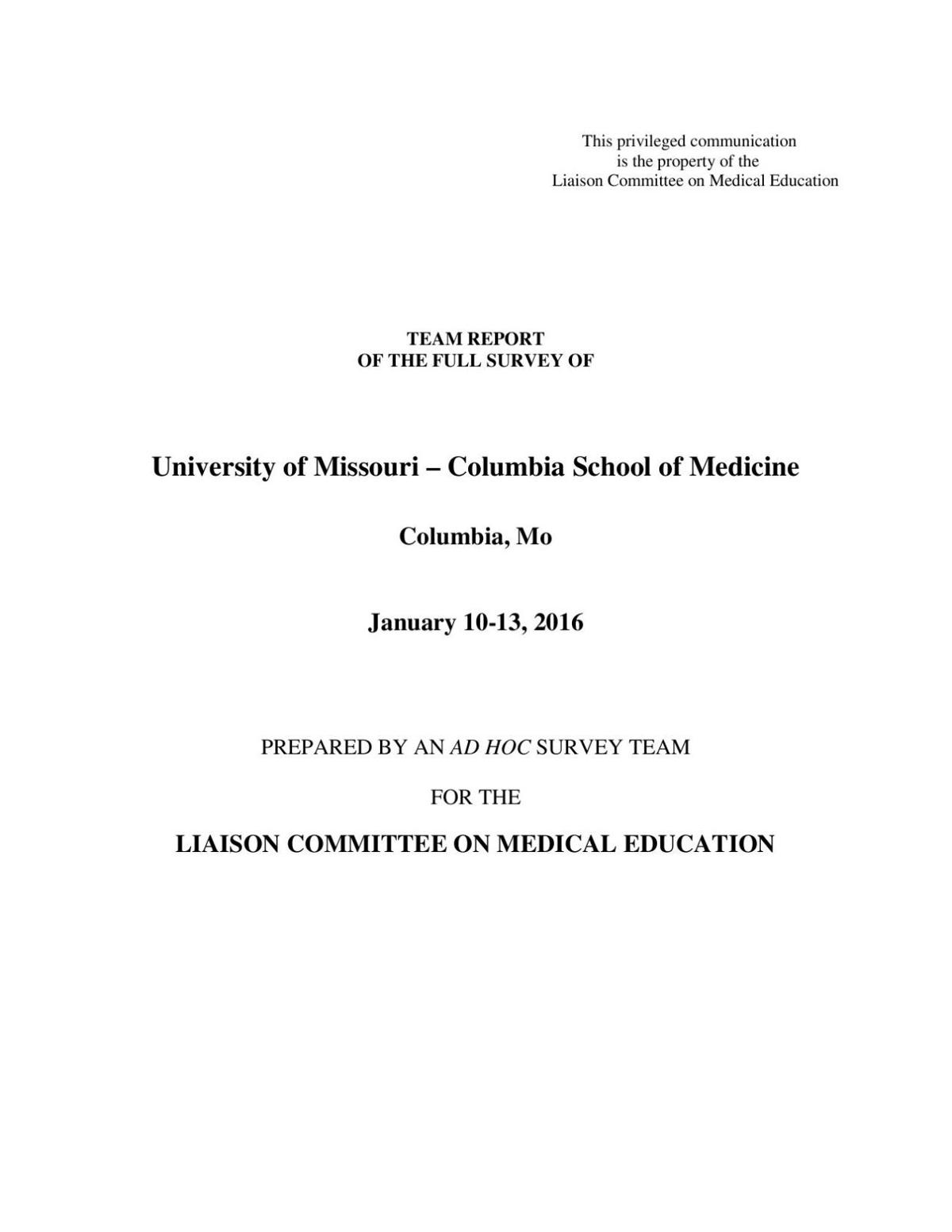 COLUMBIA — When Dawit Demissie walked across the stage in May to receive his degree from the MU School of Medicine, he was the only African-Am…