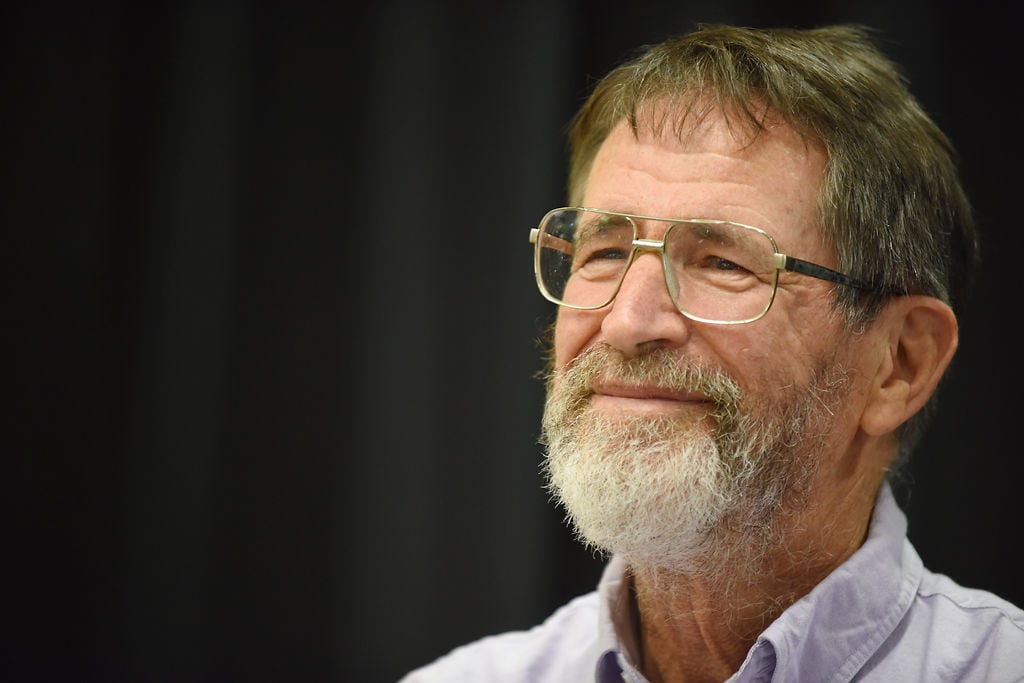 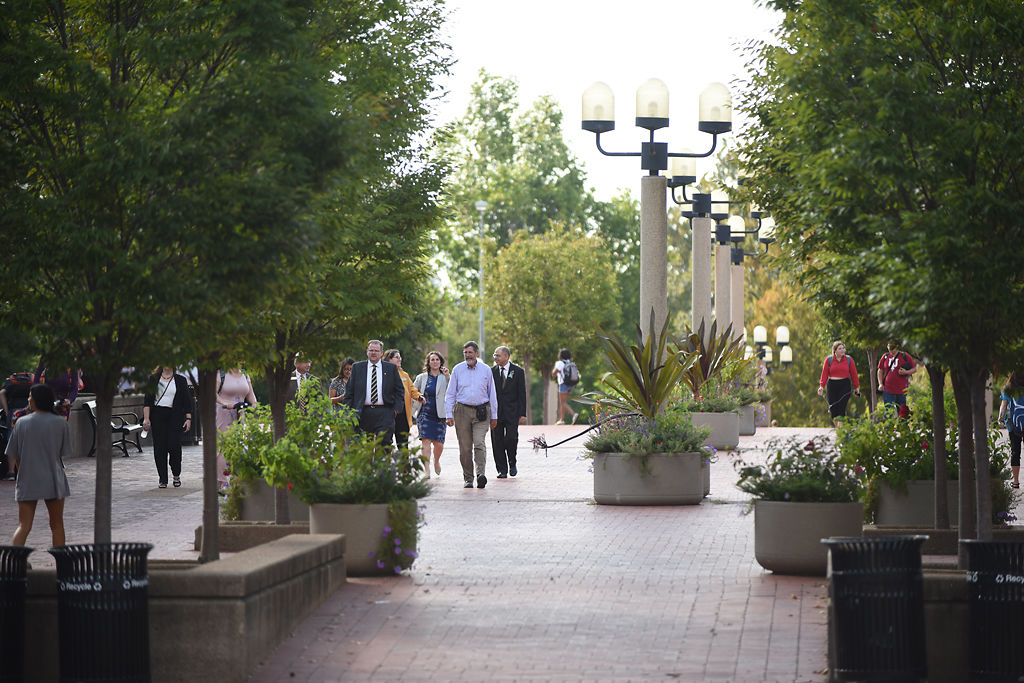 George Smith walks toward Memorial Union with Chancellor Alexander Cartwright on Wednesday through the University of Missouri Campus. Smith, who is the MU Curators Distinguished Professor Emeritus of Biological Sciences, was awarded the Nobel Prize in Chemistry early Wednesday morning. 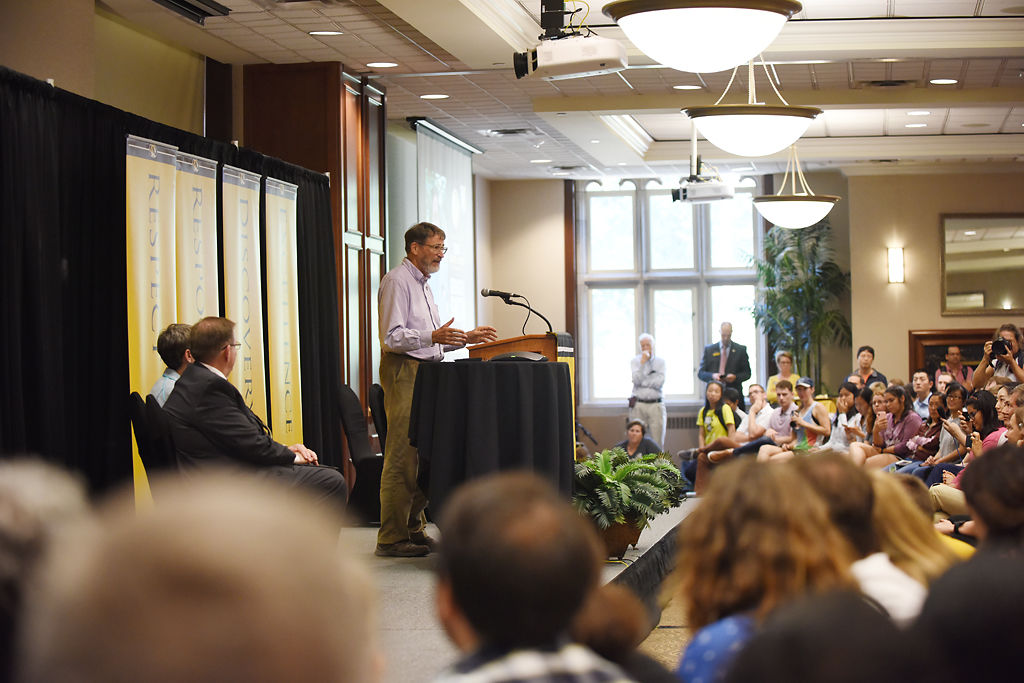 Speaking in front of a crowd, George Smith, MU Curators Distinguished Professor Emeritus of Biological Sciences, answers questions at a press conference Wednesday in Columbia. Smith shares his Nobel Prize with Frances Arnold of California Institute of Technology, and Sir Gregory Winter of the University of Cambridge. 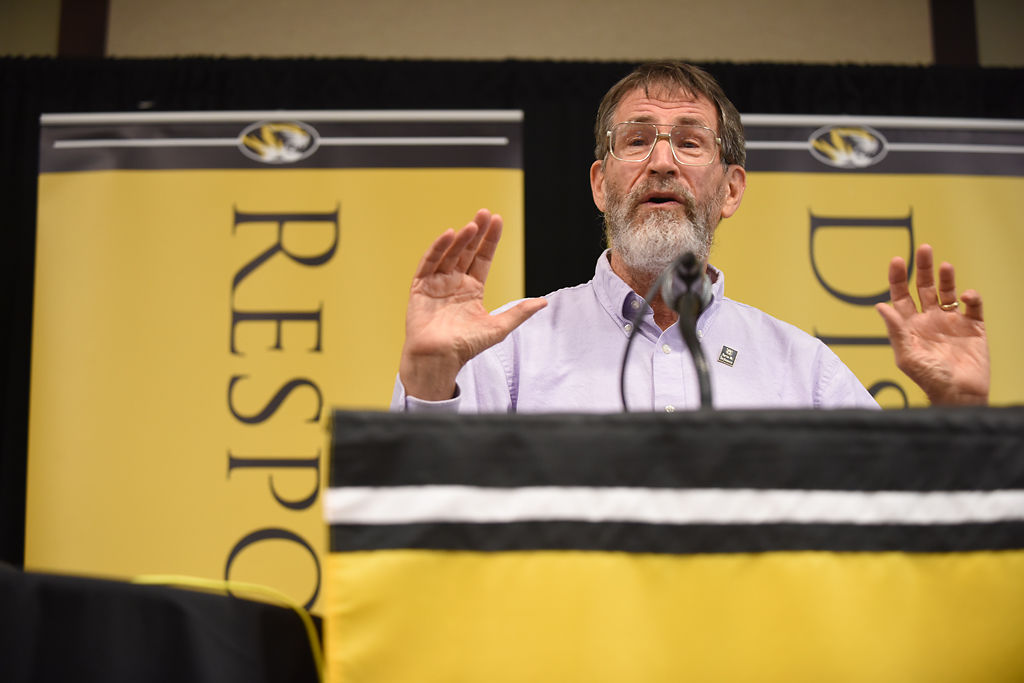 George Smith talks to the media 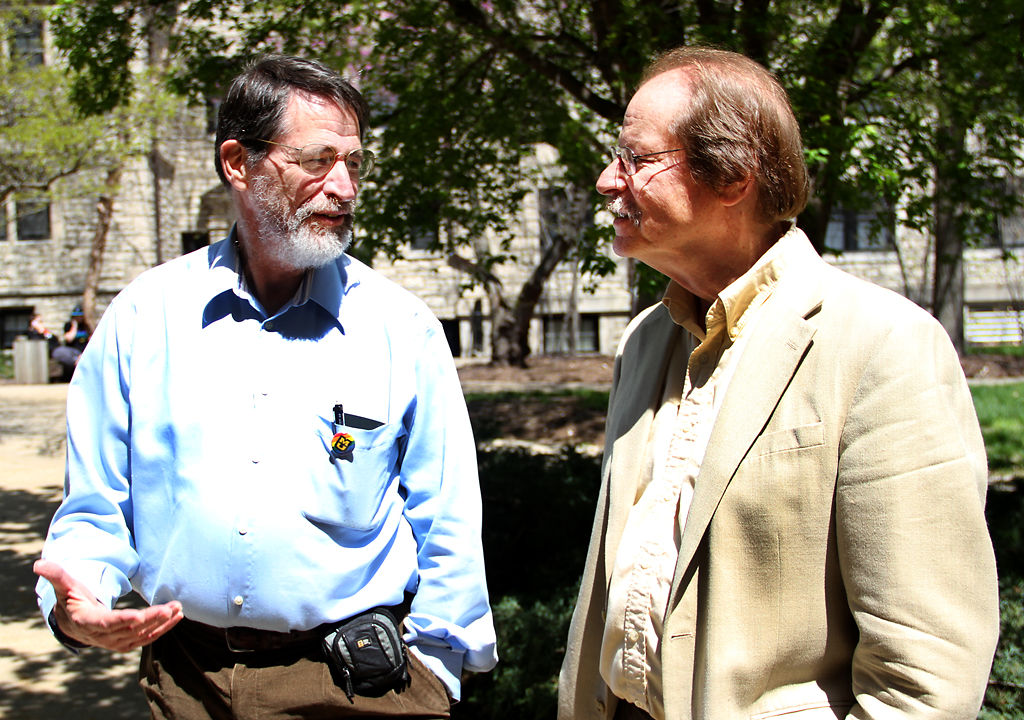 George Smith walks toward Memorial Union with Chancellor Alexander Cartwright on Wednesday through the University of Missouri Campus. Smith, who is the MU Curators Distinguished Professor Emeritus of Biological Sciences, was awarded the Nobel Prize in Chemistry early Wednesday morning.

Speaking in front of a crowd, George Smith, MU Curators Distinguished Professor Emeritus of Biological Sciences, answers questions at a press conference Wednesday in Columbia. Smith shares his Nobel Prize with Frances Arnold of California Institute of Technology, and Sir Gregory Winter of the University of Cambridge.

George Smith talks to the media

This is the first Nobel Prize awarded to an MU professor for work conducted at the university.

“It’s incredible to think that work done in our labs, on our campus, have an impact on the quality of life of individuals all around the world,” Chancellor Alexander Cartwright said at a news conference Wednesday afternoon.

This year’s prize in chemistry is shared with Frances Arnold, of California Institute of Technology, and Sir Gregory Winter, of the University of Cambridge, for their evolutionary methods of solving modern medical issues.

Smith, 77, earned the award for development of bacteriophage display technology, which is the method of identifying unknown genes for particular proteins. Winter applied Smith’s research for subsequent work about antibody therapies for treatment of cancer, rheumatoid arthritis and multiple sclerosis.

The first pharmaceutical based on Winter’s work was approved for use in 2002. The chemical name of the drug is adalimumab, which has several trade names, including Humira, one of the top-selling drugs in the world.

Smith, who spent 43 years as a faculty member at MU, told The Associated Press that he learned of the honor in a pre-dawn phone call from Stockholm.

“It’s a standard joke that someone with a Swedish accent calls and says, ‘You won!’ But there was so much static on the line, I knew it wasn’t any of my friends,” he said.

Smith joined MU as an assistant professor in biological sciences in 1975.

In the 1980s, Smith said he experienced the “most exciting individual time” during his research career. He conducted research with former MU professor Jamie Scott and others on phage display systems, technology commonly used in the drug industry to extract certain proteins from their structures.

Smith and the other researchers were testing the systems with an antibody whose antigen was well known.

George Smith developed his Nobel Prize-winning phage display technology working on E.coli in 1985. Since then, the technology has been used to combat rheumatoid arthritis, inflammatory bowel diseases and potentially even Alzheimer’s disease.

When he was reading through the X-ray film of DNA sequences of peptides — two or more amino acids linked — he saw that one peptide bonded with an animo acid.

“It delighted us, but it didn’t surprise us,” he said about the discovery.

Soon after his “aha moment,” he realized that the technology was easily applicable for others. Winter applied Smith’s research in phage displays for subsequent research about antibodies in test tubes.

Smith credited his success to his extended knowledge in biological sciences he learned in college. He studied cell biology during the emergence of genetic code research, so every week he was reading breakthrough information and data on the topic, he said.

He was the “right person at the right place” throughout his career, he said, because “several key areas of knowledge came together” in both education and subsequent research.

“There have been enormous numbers of people in this web of science, and I happen to be somewhere in the middle of that, and that’s why I’m getting this prize,” Smith said to reporters Wednesday. “But, it’s not really honoring me personally, so much the things that have surrounded this, all the scientists that surround this.”

During Wednesday’s news conference, Smith said science was a field built on collaboration.

“Science doesn’t work by picking winners,” Smith said. “Science is a big community of people engaged in their work and their teaching.”

Thomas Quinn, professor of biochemistry, said he has been a colleague and friend of Smith for nearly 20 years. He’s grown to appreciate Smith not only for his science but for who he is as a person.

Smith has always been very involved in student education, Quinn said. He provides an expertise in his areas of study but is also really well versed in all aspects of science.

“I see him from a distance, and I’ve always been in awe of him,” she said.

Smith isn’t willing to publish anything but the best papers, she said, waiting until something is important enough to publish.

“George has always been a man of principle in that regard,” Wall said. “It’s really amazing.”

Mark McIntosh, vice president for research for the UM System, noted the importance of the collaborations of researchers at MU and around the world.

“Display phages, such as those developed in Dr. Smith’s lab, provide a foundation for a wide range of applications that could impact experiments between basic scientists and clinicians like those envisioned in the Translational Precision Medicine Complex,” McIntosh said by email Wednesday afternoon. “I’m interested to see how this Nobel laureate’s legacy will continue to contribute to research in the future.”

At the news conference Wednesday afternoon, Smith said he does not think this honor will change his life. He is retired but still contributes to the university and said he anticipates receiving many invitations to attend lectures in the future.

Smith spoke about his influences, his research and his experience at MU during the conference. As he stepped on the podium, the crowd in front of him gave a standing ovation. At the end of the conference, people rushed to take selfies with him and congratulate MU’s new Nobel laureate.

“We get so overlooked in Missouri, and even though my father won the Nobel today, this year, it’s for work he did in 1985. Mizzou has been doing phenomenal work.”

Although I was never in one of Dr. Smith's classes, I want him and his colleagues to know that their work has changed my family's life for the better.

Dr. Smith's work in developing bacteriophage display technology led to the creation and approval of a drug called Humira, which my father has relied on for the past few years to manage symptoms of Crohn's disease.

Without Humira, my father's quality of life would almost certainly be poorer. Unfortunately, I have seen this firsthand. In the last year, after multiple surgeries to help his Crohn's disease and having to be off Humira, my father suffered for months. He lost a scary amount of weight. He nearly used all of his paid sick leave for the year. We weren't sure what the course of action would be if medication and surgery couldn't help him recover. It wasn't until he was deemed well enough to continue taking Humira that he saw steady improvement and could return to work and to a stable state of physical health.

I shared the Columbia Missourian's story about Dr. Smith's winning the Nobel Prize with my father today. He was happy to read it and grateful to know the scientific community is working to help others with conditions similar to his. While Dr. Smith's work has helped treat things like cancer, rheumatoid arthritis and multiple sclerosis, Crohn's disease does not often receive the same attention.

I wish I could thank Dr. Smith in person for his ingenuity and dedication to his field. It truly has changed lives for the better. I'm proud to know Dr. Smith will continue to inspire future generations of MU students to do the same.

COLUMBIA — As an 11-year-old living on an Army base in Sagamihara, Japan, George Smith spent his spare time collecting snakes and butterflies.