MU has erected a permanent casing over the tombstone of Thomas Jefferson on Francis Quadrangle that cost the university about $20,000.

The acrylic case was put in place by MU to ramp up security around the obelisk after incidents of vandalism occurred near it and the bronze statue of Jefferson sitting nearby.

"We took this action to protect it from vandalism," MU spokesperson Christian Basi said in an email. "This is Jefferson’s original tombstone, and it was entrusted to the university. We have a responsibility to ensure that it is preserved appropriately."

Many took to Twitter after the case was built to criticize the decision.

"Disgust. To be putting this in glass as if it is a piece of art or sacred and in need of protection... sick," MU undergraduate Caycee Roth wrote in a tweet Sunday.

Disgust. To be putting this in glass as if it is a piece of art or sacred and in need of protection... sick. https://t.co/ejEezmINRO

The death of George Floyd in May sparked the latest wave of conversations across the U.S. about racism and social justice. These conversations included criticizing historical figures, such as Jefferson, and many MU students called for the removal of the Thomas Jefferson statue.

MU issued a statement June 12 announcing its decision to keep the Jefferson statue on campus after a meeting among UM System President Choi, three members of the UM System Board of Curators, leaders of the Legion of Black Collegians and Roman Leapheart, a student who circulated a petition to remove the statue.

“The conversation was an example of the power of civil discourse and included discussion of complex issues and different perspectives,” Choi said in the June 12 statement. “After further discussion with other curators, the university decided not to remove the Jefferson statue. We learn from history. We contextualize historical figures with complex legacies. We don’t remove history." 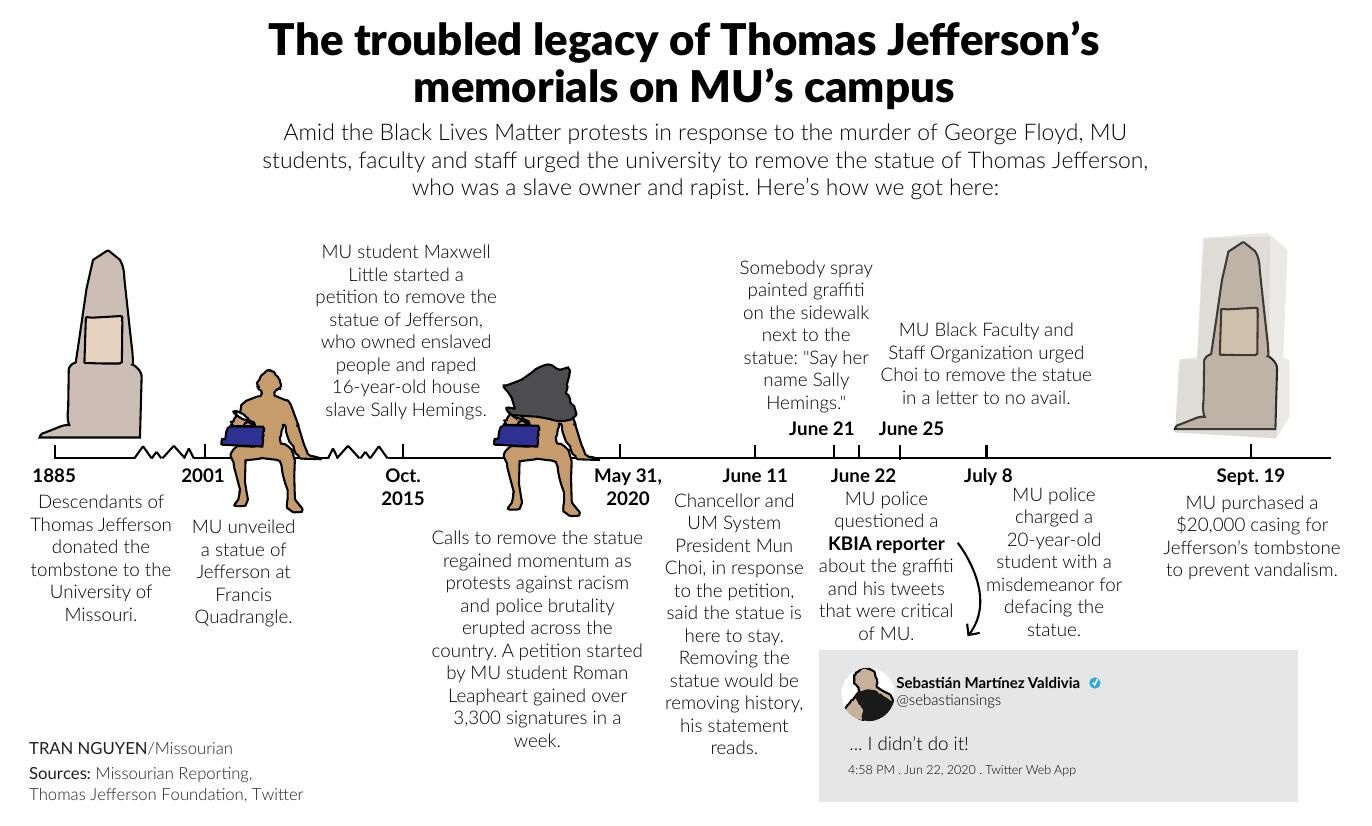 Following the decision, the words "SAY HER NAME SALLY HEMINGS" were spray-painted on the sidewalk in front of the statue. Weeks before, in May, someone placed a plastic bag over the statue's head.

This isn't the first time the statue and tombstone have been a point of contention for students. During the protests on campus in 2015, sticky notes that read “racist,” “rapist” and “slave seller,” among other terms, were placed on the statue. Defenders of Jefferson occasionally removed them and draped an American flag around the statue.

A task force was formed prior to the start of the fall semester to contextualize the statue and Jefferson's life. It consists of students, faculty, staff, curators, alumni and historians and has been meeting regularly, Basi said. The names of those on the committee were not immediately made available.

Basi said the task force is expected to make a recommendation by early 2021.

According to previous Missourian reporting, MU was the first university established on the land purchased in the Louisiana Purchase. This land was acquired by Jefferson's administration from France in the early 19th century. Years after Jefferson's death, requests were put in to receive his tombstone. It was eventually given to MU and unveiled in 1885.

MU said Friday it would keep the bronze statue of Thomas Jefferson on campus as students continue to demand its removal.