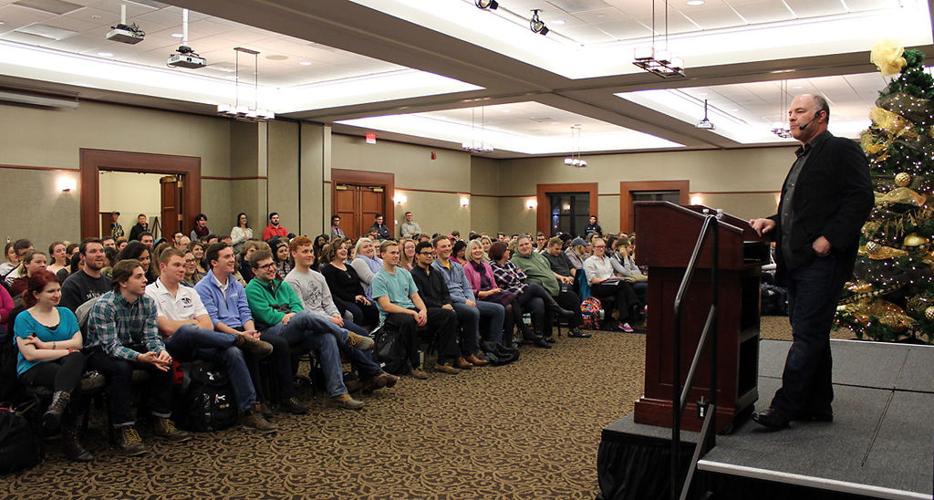 Jackson Katz speaks to a room of students and community members about bystander intervention and violence prevention Nov. 30 at the Reynolds Alumni Center. Katz is an expert on gender violence and was brought to MU for an event sponsored by MU's Relationship and Sexual Violence Prevention Center and Interfraternity Council Peer Educators. 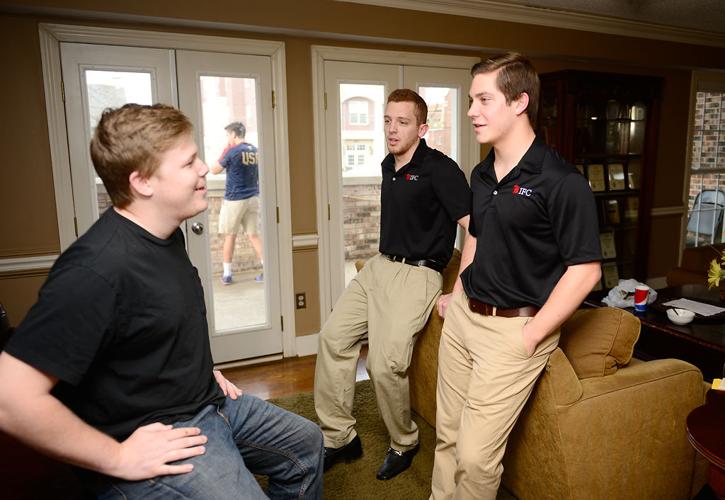 Jackson Katz speaks to a room of students and community members about bystander intervention and violence prevention Nov. 30 at the Reynolds Alumni Center. Katz is an expert on gender violence and was brought to MU for an event sponsored by MU's Relationship and Sexual Violence Prevention Center and Interfraternity Council Peer Educators.

COLUMBIA — Alicia Pitts was a freshman at MU in 2006 when, one night, she became worried about a friend of hers who'd gone to a party at a fraternity house. She decided to go look for her.

She began in the basement where the party was and then started going room to room. She found her friend in a bedroom, passed out. Four men were in the room in various states of undress, and one was having sex with her friend. Pitts started yelling and pushed the men away. They were too drunk to give her a fight.

She got her friend dressed and took her home.

They discussed going to the hospital, but her friend didn't want to because she couldn't remember what had happened, Pitts said. They didn't discuss reporting the assault to police.

Pitts now investigates crimes, including sexual assault and child abuse, as a forensic science consultant in the Air Force Office of Special Investigations. She now has a better understanding of the boundaries of consent and said she would encourage her friend to report the assault were it to happen today.

Looking back, she's struck by the fact that she and her friend didn't realize what had happened was a crime.

"During college for me, that was just something that happened at frat houses," said Pitts, whose last name was Swartz when she was a student at MU. "In my mind at that time, I didn't realize that level of intoxication played a part of consent. Not being able to consent because of intoxication didn't click as being illegal. That was just something that was expected at frat parties, which is why I just didn't go to them, or didn't drink."

Witnessing her friend's assault has made it easier for her to empathize when she talks with victims, she said. But she thinks students need a better understanding of how often assaults happen because when victims realize they're not alone, it's easier for them to come forward, she said.

"I've told victims that true predators aren't going to stop offending until they're stopped by an outside force," Pitts said. "They have to have someone that says enough's enough — you're stopping now. Maybe a report can be that outside force."

Preventing sexual assault is a goal that's eluded universities as they've faced greater public scrutiny, and MU hasn't yet found an approach that has resonated.

In the past few years, MU has mandated bystander awareness training for all incoming freshmen, expanded its Title IX office and created a peer education program for fraternities.

But sexual assaults at MU remain higher than the national average for universities. In a 2015 report, 30 percent of MU female undergraduates reported being victims of nonconsensual sexual contact by their senior year. Nationally, 26 percent of undergraduate women reported experiencing nonconsensual sexual contact, according to a study by the Association of American Universities.

Preventing sexual assault in MU's Greek life community has been a narrower focus because of a higher rate of incidence associated with Greek life.

Members of Greek life made up 27 percent of MU's student body in the 2014–15 school year. However, 38 percent of reports of sex discrimination made to the Title IX Office that year involved members of Greek life in some way, Assistant Vice Provost for Civil Rights and Title IX Ellen Eardley said in a June 2015 campus sexual assault summit. The university has not yet released data from the 2015–16 school year.

New rules forbade fraternities from serving hard alcohol at their houses beginning in fall 2015. Nearly half of MU's fraternities have been placed on probation in the last two years, many for alcohol violations, some of which were related to sexual assault allegations.

Other proposals aimed at making fraternities safer were rejected in June 2015, included banning women from fraternity houses on weekend nights and drug-testing all students living in Greek houses.

Besides the policy changes, Greek life leaders and Title IX officials are using various programs to educate students on sexual assault: what it means, what the consequences are and how to prevent it.

A new approach to education

The Interfraternity Council, which is the governing body of 30 of MU's fraternities, took matters into its own hands in spring 2015 and created a peer education group to teach other fraternity members about sexual assault. Since then, the program has expanded to presentations that include alcohol and party culture, masculinity and mental health.

The men in the peer education group represent 13 fraternities. They visit chapters to facilitate group discussions about these topics, tailored to any specific problem a fraternity might be facing. The sexual assault program teaches men about bystander intervention, definitions of consent and gives information about Title IX. IFC Vice President of Risk Management Ryan O'Connor and Vice President of Programming Sean Miller led the group in 2016. Mike Pasternock will take over their roles in 2017, Miller said.

Kim Scates, MU's Relationship and Sexual Violence Prevention Center's education coordinator, works with O'Connor and Miller to train the men in the group. They meet as a group every Wednesday and were presented to about one chapter each week this past semester.

It's easier for IFC men to engage and ask questions in the peer education setting because they know people presenting have probably been in similar situations, Miller said.

"I've gotten presentations about similar topics, and you could almost see people just (tuning out)," Miller said. "They see an adult who's spitting out numbers, and those numbers are really important, but a lot of times college students feel like the adult talking in the front of the room doesn't understand what college is like, right now."

It's up to the majority of men who will never sexually assault someone to stop the small percentage who will, O'Connor said. More than 60 percent of men at one university who said they had committed or attempted rape also said they had raped more than once, according to a 2015 National Sexual Violence Resource Center report.

O'Connor and Miller both said they've found that members have been engaged during the peer educators' presentations.

"What's inspired me is looking at a chapter during these discussions and just seeing light bulbs go on," Miller said. "Almost 100 percent of these guys understand that this prevention work is something important, it's an issue, but don't realize how much they can do to work toward stopping sexual assault. During our discussions, a lot of them realize how much power they have in this situation, and that's really cool."

Pitts agrees that good guys can and should use their influence.

"Nobody wants to say they have a rapist in their brotherhood or sisterhood," she said. "When you identify a predator, I would like to believe that the other people would be able to call those people out and weed them out."

There's a difference between predators, who assault women intentionally and repeatedly, and potential offenders, who may not realize that it is a crime to assault someone who cannot give consent if they are intoxicated, Pitts said.

"Predators are predators. You're not going to change that," she said. "But you can educate people on the circumstances so whenever they see that going on, then they can stop it."

She also said she believes sexual assault education should focus on teaching men not to assault, rather than teaching females how to avoid being a victim.

"There are things you can do to make yourself safer, but you can only do so much against a predator who's going to offend no matter what," she said.

Ultimately, all students need to be made more aware of the consequences of sexual assault and the boundaries of consent, she said.

"Everybody's not going to get a break like Brock Turner," she said, referring to the Stanford University swimmer who was found guilty of three felony counts of rape but was released from jail after three months. "Eventually, society is going to catch up."

Eardley, who leads MU's Office for Civil Rights and Title IX, also presents to individual Greek chapters and said she believes it helps humanize her office. She said all students need to know what behaviors are prohibited and how allegations are handled. She also wants victims to understand their options and the privacy the office provides.

"Folks understand the process of engaging with our office," she said. "They learn that we don't immediately, necessarily, start the investigation so that people might feel more comfortable accessing resources that they might need to access. I also think that it's important for individuals who might be inclined to engage in behavior that is prohibited to know that we're serious and that we take these types of allegations very seriously."

Her office works in tandem with the Relationship and Sexual Violence Prevention Center for campus education efforts, including in Greek life, she said.

"We would like to have enough staff to have regular outreach to every single fraternity and sorority," Eardley said. "We don't have that. We have a campus of over 50,000 people so we rely on the RSVP Center be a leader in this regard. In many ways, it's surprising to me there hasn't been more focus by the university on RSVP. It's one of the first organizations like it in the country."

Studying how men can advocate against gender violence is Jackson Katz's life work. In a speech at MU last November, he urged men to stop viewing sexual assault and domestic violence as "women's issues."

"We don't need all the men on the University of Missouri campus to become activists for gender justice," Katz said in an interview after his talk. "That's not a realistic goal. A realistic goal is to empower more men to start taking some risks and joining women who are the driving force behind the change."

He said he believes leaders of campus organizations, including fraternities and sororities, need intensive training on sexual assault prevention so they're prepared to navigate situations as they occur.

"If you haven't had training and haven't been pushed to think about your leadership role in that way, you're not often going to come up with (solutions)," Katz said. "Training has got to be expected, mandatory and organically embedded in the whole experience."

Many men in fraternities aren't comfortable with their peers' behavior, Katz said, but remain silent because they're afraid of how they'll be perceived if they speak up.

"One of the goals of prevention education is to empower people to not be silent, to take some risks and know they're not just speaking for themselves," he said. "They're speaking for men who haven't spoken up for one reason or another."

To report an incident of sex-based violence or discrimination, fill out this online form, email civilrights-titleix@missouri.edu, or call 573-882-3880.

Katz implored men not to stay silent about violence and discrimination against women. He spoke to a packed room at the Reynolds Alumni Center on Wednesday night on MU's campus.