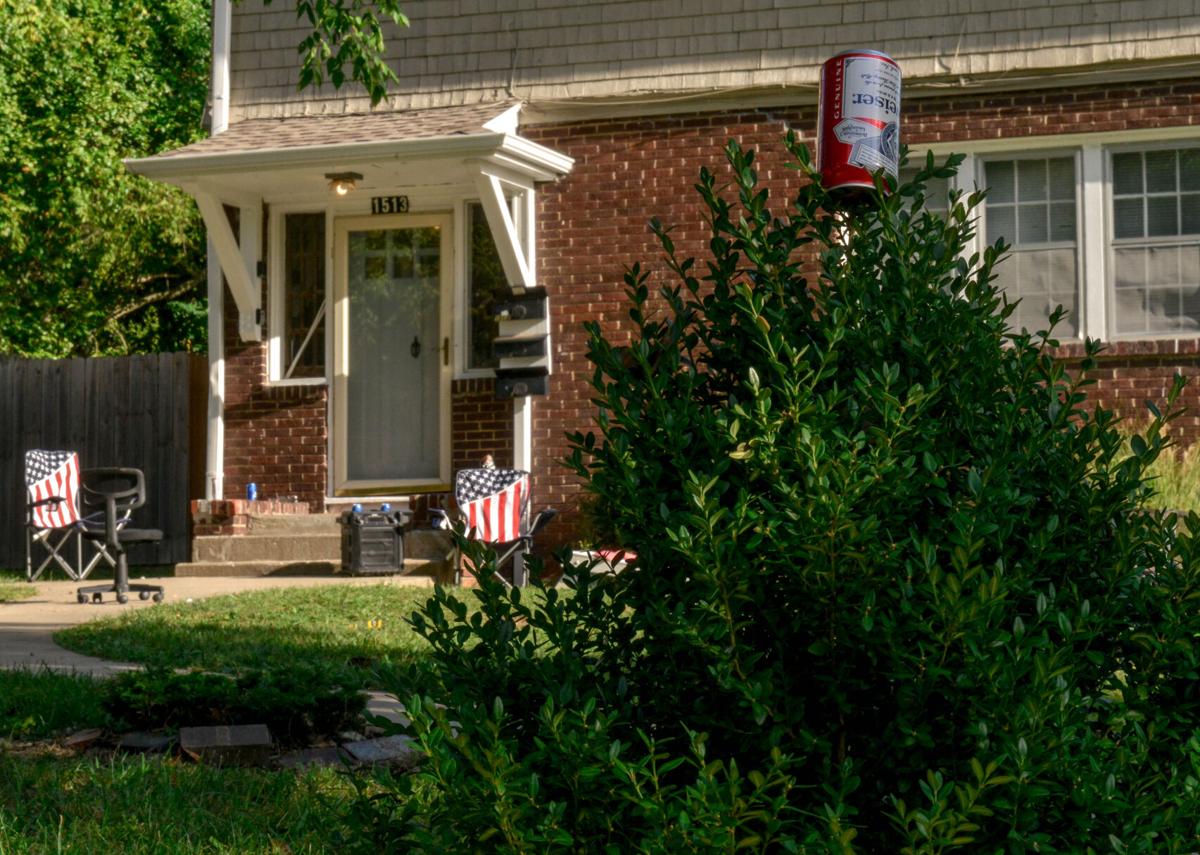 An empty beer hangs in a bush in front of an East Campus house on the morning of Sept. 4 while other discarded cans and empty cases litter the yard. East Campus parties have continued despite the COVID-19 restrictions set by the city of Columbia and MU. 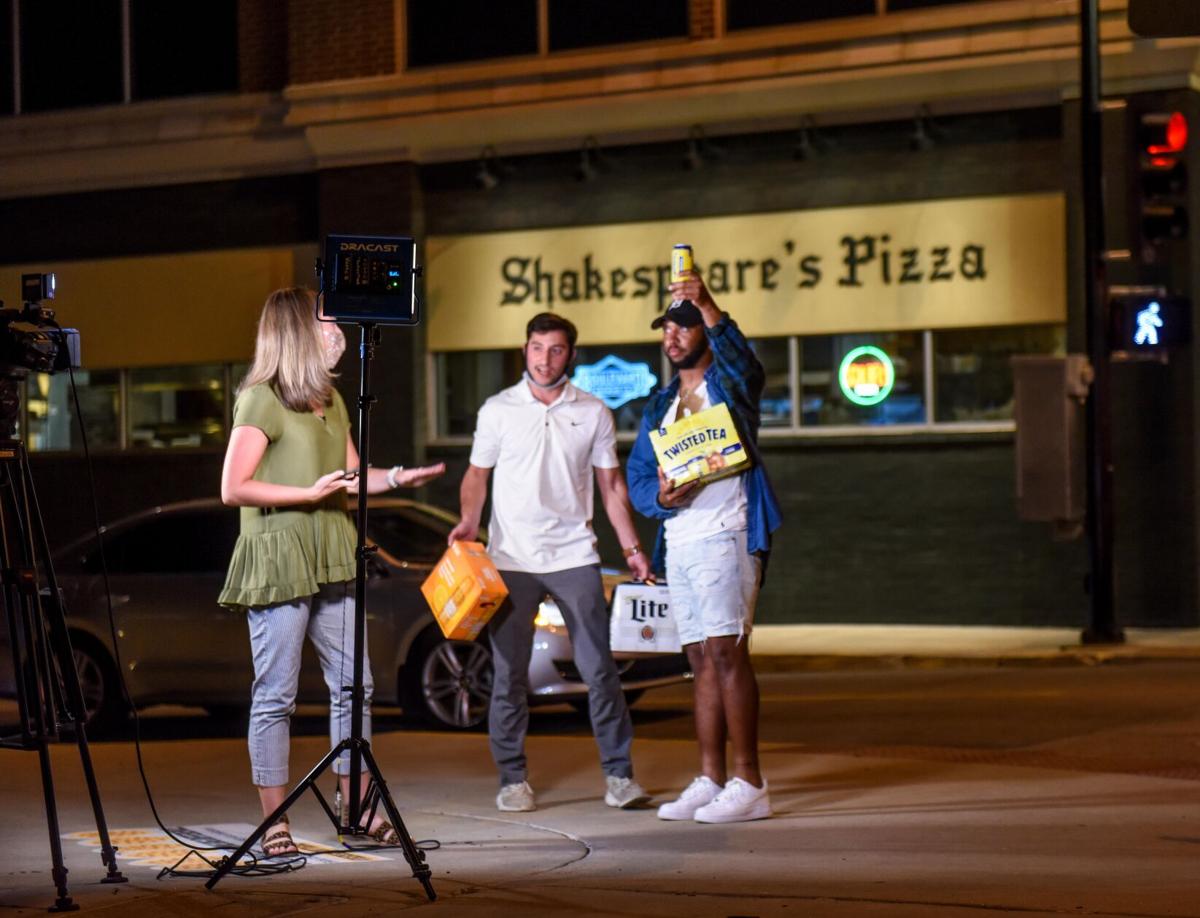 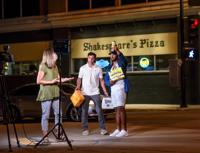 Two men yell at KOMU reporter Sara Moyers, interrupting her reporting, on the evening of Sept. 5 in Columbia. The men, who left a bar shortly after close, had just purchased their cases of alcohol before approaching the masked reporter, who urged them to leave. The men, whose masks were lowered, then left with a group of unmasked individuals. 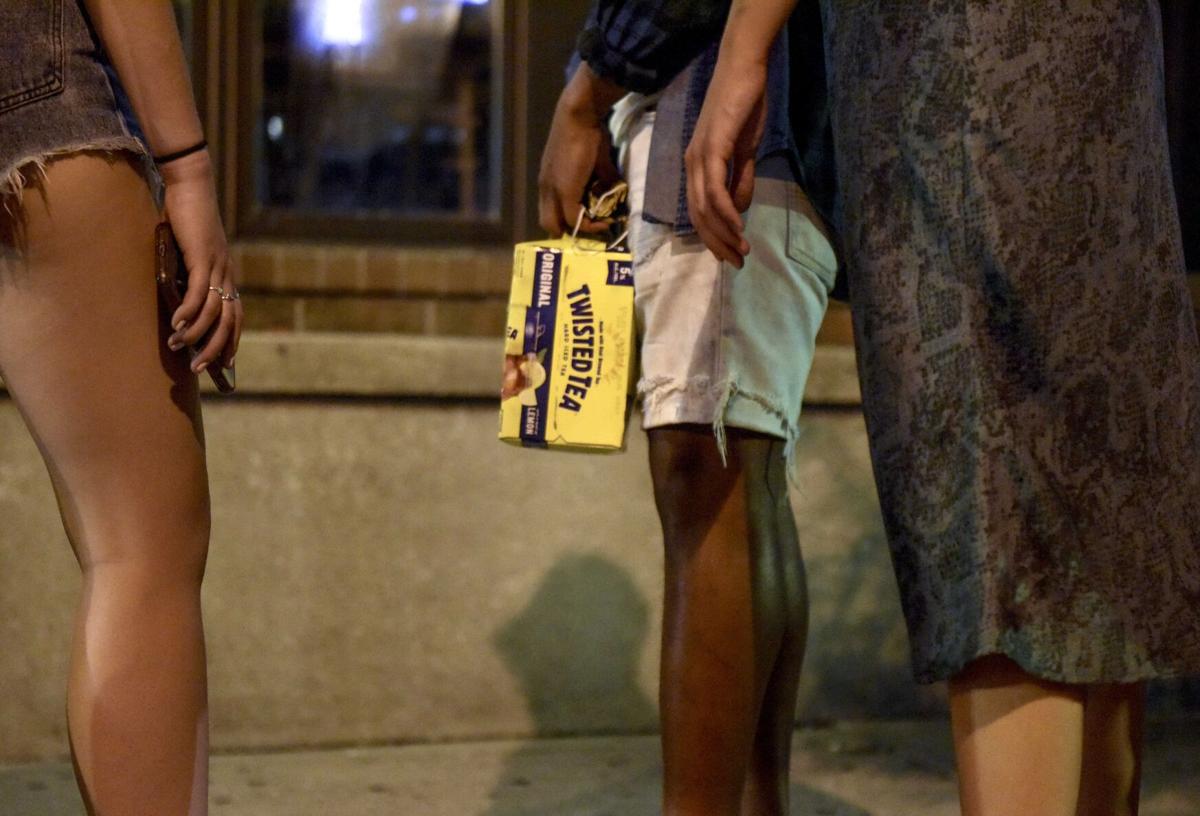 Clutching a case of beer, three young adults stand outside of Campus Bar and Grill on the night of Sept. 5 in downtown Columbia. The unmasked group could be heard planning the rest of their evening after the bar closed. 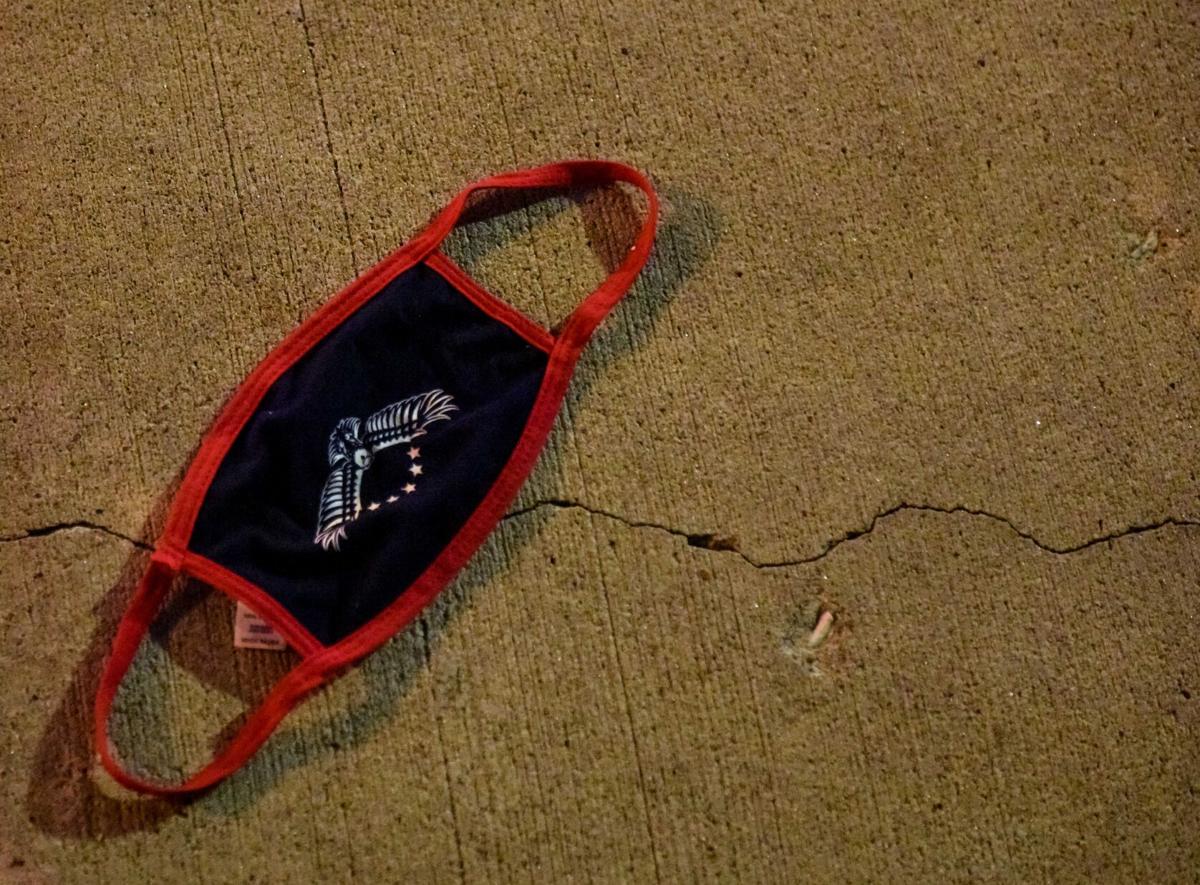 A discarded mask lies on the sidewalk across the street from Campus Bar and Grill on the night of Sept. 5 in downtown Columbia. As of Sept. 12, there were 863 active cases of COVID-19 in Boone County. 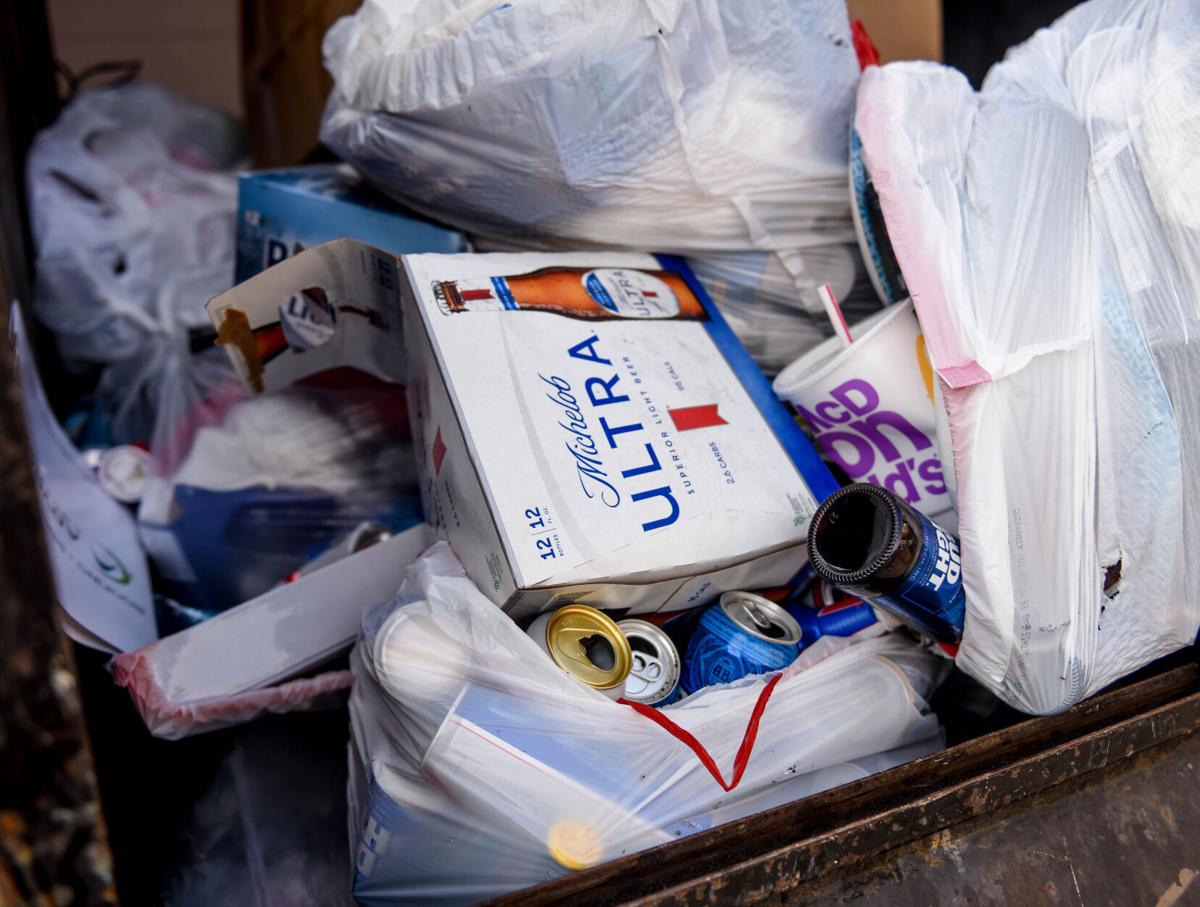 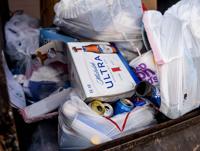 Several trash bags filled with beer bottles, beer cans, empty beer boxes and other trash lie in a residential dumpster on Sunday, Sept. 6, 2020 in downtown Columbia. An assortment of empty beer and hard seltzer cans also littered the ground surrounding the trash can. 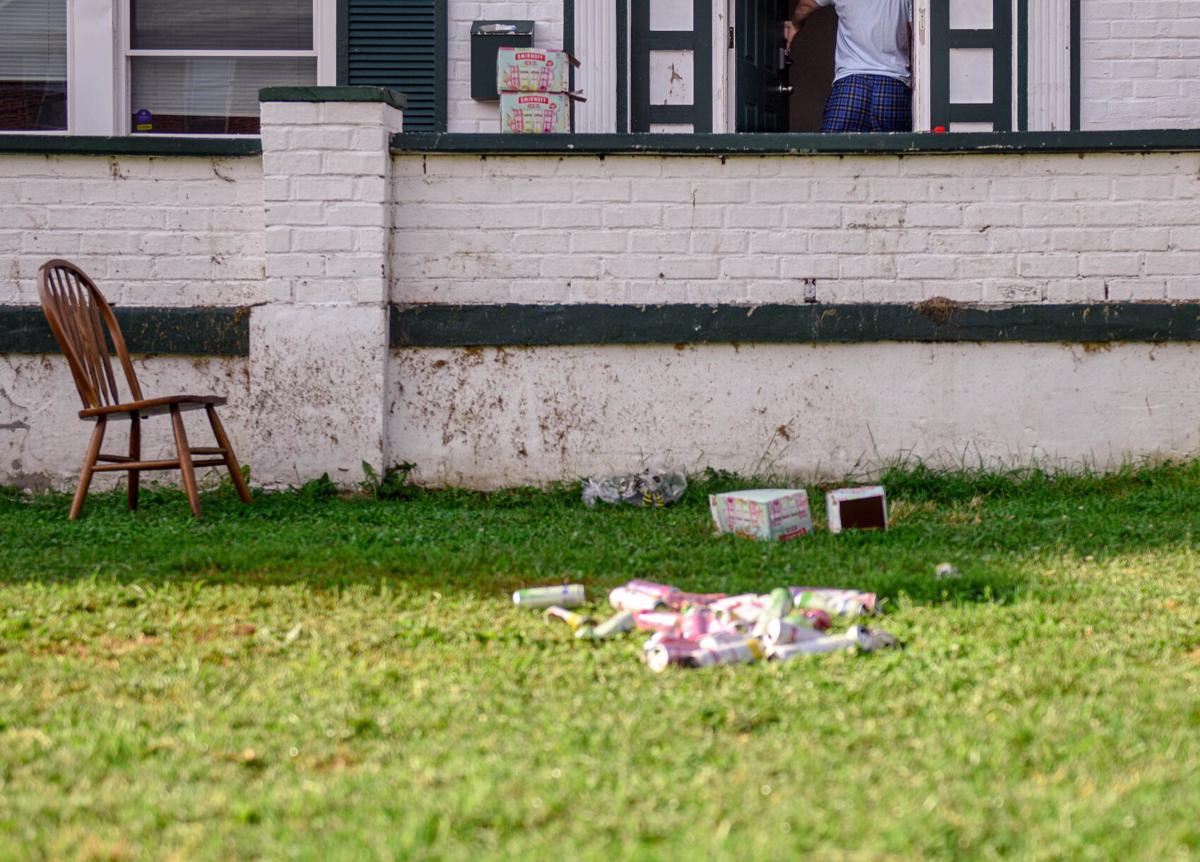 An East Campus resident steps into a home on Wilson Avenue on Sept. 6 after an evening of socializing. Over the past week, MU has made national headlines for its number of COVID-19 cases and its response to the pandemic. 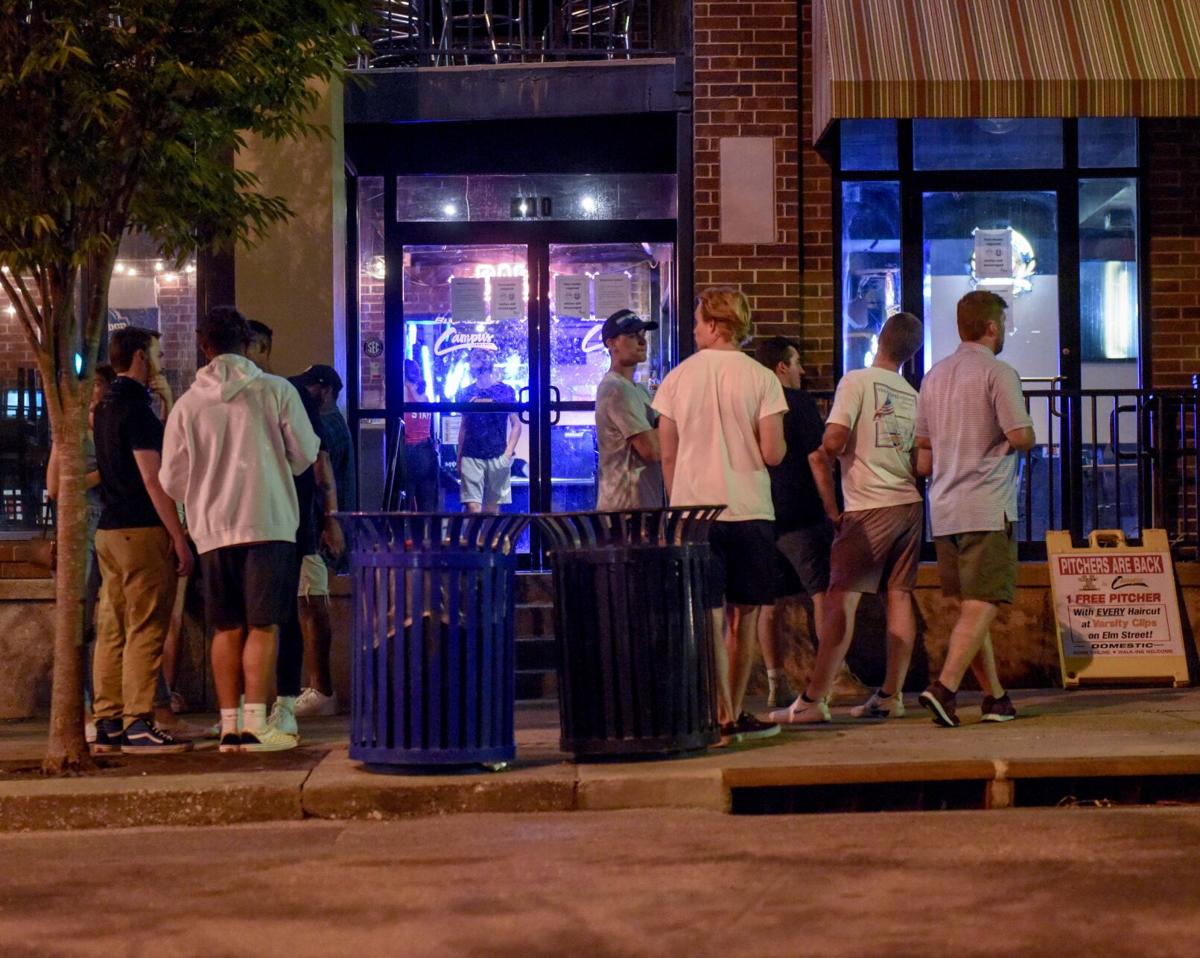 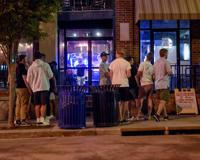 A group of men stand outside of Campus Bar and Grill shortly after close on the night of Sept. 5 in downtown Columbia. College-age students continued to gather together and drink after the new city ordinance stopped alcohol sales at 9 p.m. and closed bars at 10 p.m. every evening. 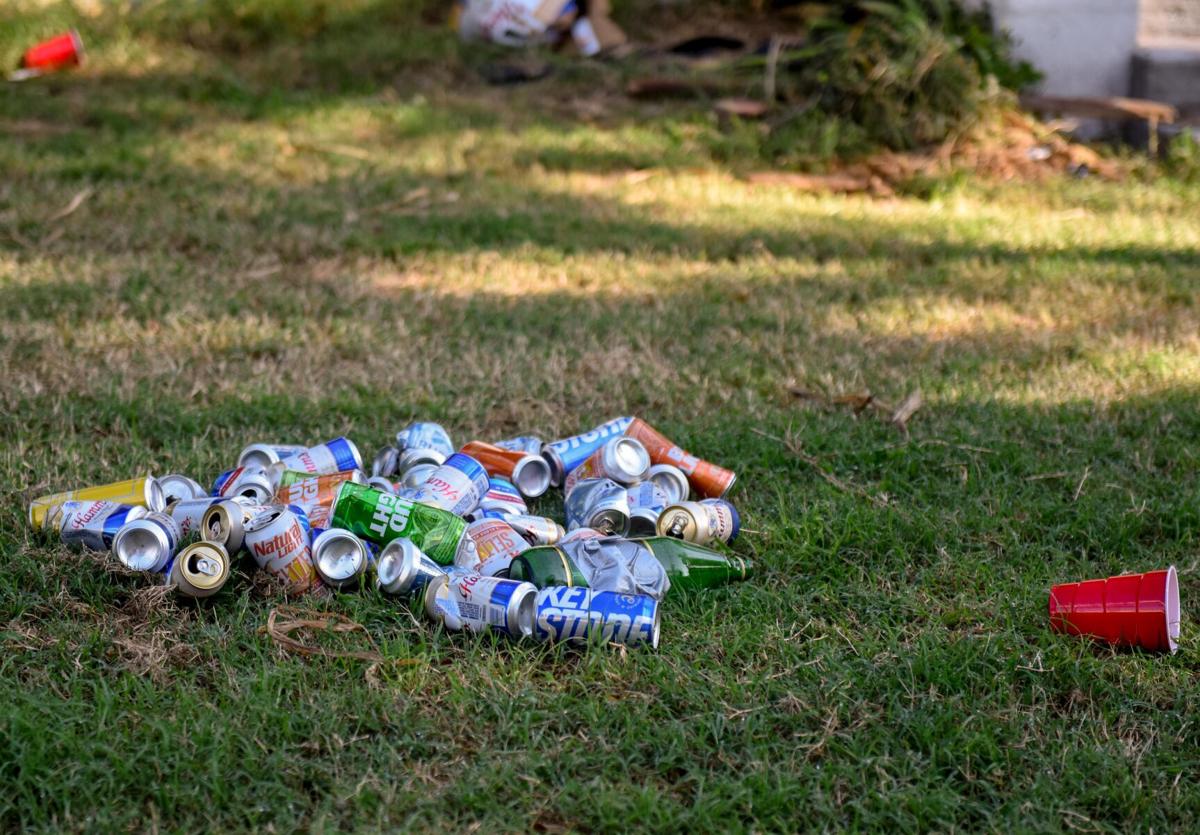 Empty beer cans, plastic cups and an empty 40-ounce alcohol bottle lie in a pile in the front yard of an East Campus house early in the morning of Sept. 5, in Columbia. The 40-ounce bottle was covered in tape, a common practice for the drinking game known as "Edward Forty Hands."

MU sophomore Elise Diesfeld has visited downtown Columbia frequently since returning to campus in August. She heard the music blaring and saw the party clothes. It was easy, Diesfeld said, to tell the people walking around did not have social distancing on their minds.

Cases of COVID-19 in Boone County spiked, reaching a record daily high of 221 on Sept. 5, since college students came back to town en masse for the fall semester.

The city and MU have toughened up rules about public conduct, but students and city officials worry there’s not much more they can do to slow the increase without wider testing and people altering their behavior.

As of Friday, Boone County has reported 3,730 positive cases. Of that, almost half — 1,806, or 48% — have been among people ages 18-22. MU has reported 1,194 positive cases since Aug. 19, about the time students began returning to Columbia. However, the number of active cases has declined 14% — down 96 cases to 562 — since Wednesday, MU spokesperson Christian Basi said in an email.

As the number of student cases swelled, MU began issuing citations to students violating city and campus orders, such as gathering in groups greater than 20 people or not wearing masks. As of Friday, 394 citations had been referred to the MU Office of Student Accountability and Support, Basi said. This could include multiple reports of the same incident.

The increase in student cases was a big reason the city continued and toughened its public health order Aug. 28. People must wear masks in public places, and bars and restaurants must stop serving alcohol by 9 p.m. and close by 10.

On- or off-campus students can be cited

Even if there are more than 20 people gathered — say, a house party at a downtown apartment building — the Columbia Police Department mainly enforces the order on the basis of complaints, Department Community Relations Specialist Brittany Hilderbrand said in an email. When officers are called in, the first line of defense is typically to educate people about why socially distancing is important.

If the complaint involves an MU student, Assistant Health Director Scott Clardy and Hilderbrand said they alert MU for follow-up or intervention.

In a recent interview with The Chronicle of Higher Education, UM System President and MU Chancellor Mun Choi said he also monitors off-campus areas on his moped and encourages students to social distance.

Basi said MU has the ability to punish students, whether they are on or off campus, for violations. These punishments at their most extreme include suspension and expulsion.

He also said that as of Friday, no students have been expelled for violations. Students could also be assigned community service or damage restitution or be required to write an essay or research paper about the effects of COVID-19.

Reports can be filed using a form on the Office of Accountability and Support website. Basi cautioned  reports need to be detailed in order for MU to take action.

Including an address, a photo or names can help MU track down the people involved.

“Telling us that you saw four individuals wearing jeans and baseball caps walking down the street on campus without masks on doesn’t help us out because it’s just not possible to track down those individuals. If you are going to submit a report, the more information you can provide us, the more opportunity we’re going to have to interact with those individuals to determine exactly what happened.”

At a meeting of the Columbia City Council on Tuesday, Columbia/Boone County Health and Human Services Department Director Stephanie Browning told the council, based on evening drives around town, she hadn’t noticed an increase in house parties after bars began closing early.

At the same meeting, First Ward Councilwoman Pat Fowler described a similar scene to those Diesfeld saw in her own trips downtown — of apartments and bars crowded with students.

‘You really have to be cautious’

Diesfeld said she gets the urge to party, to some degree. She said she’s been careful, only hanging out with a few friends and trying to stay socially distant with them, but even in that capacity, she understands the desire to socialize. She even wrote about it in an article for the St. Louis Post-Dispatch, arguing, “The return to campus feels like universities dangled a treat in front of an untrained puppy and expected him to sit.”

“It’s really unrealistic to not hang out with anyone because then you’re sacrificing your mental health,” the journalism major said. “But you really have to be cautious about who you’re surrounding yourself with.”

Her warning comes from experience. Diesfeld was exposed to a confirmed positive case. One person in her bubble visited the apartment of a friend who had not been quite as careful.

She said she was frustrated when scrambling to get tested and secure a room in the quarantine housing reserved for students who live on campus.

“My first instinct was to be mad, but, you know, I kind of saw this coming, and I feel like everyone sees it coming,” she said. “Everyone knows someone who has it or is quarantining currently, so it’s just what’s to be expected, and that’s really sad.”

Because of that, Diesfeld doesn’t think it’s a good idea to send everyone packing back to their hometowns. Browning echoed this at the council meeting. Dr. Anthony Fauci, director of the National Institute of Allergy and Infectious Diseases, even called it “the worst thing you could do” on NBC’s TODAY show.

Sending students back to their family homes across the state, country and, in some cases, world, could lower Columbia’s numbers but spread the virus farther.

“It’s really just not a smart move at this point,” Diesfeld said. “But at the same time, students are not safe on campus.”

There’s the option of a stay-at-home order, but even that, Clardy said, would likely be ineffective at this point.

“I’m not convinced it would be that helpful in eliminating cases or even necessarily significantly decreasing cases, because there’s so much virus circulating in the community already,” he said. “(People who have it) would just be giving it to people they live with, as opposed to people they may be partying with.”

That leaves what Browning called at the council meeting “our best hope”: getting as many people tested as possible and making sure everyone positive is quarantined, plus strict social distancing and mask-wearing.

MU has recently cracked down on its mask policies, banning certain kinds of masks proven to be less effective and requiring students and faculty wear their masks over both their nose and mouth at all times, except when they are alone outdoors or in a private office.

“There are a lot of students who aren’t following the rules, and I don’t think that the social media campaigns are going to change those students’ minds,” France said. “I just wish that (MU) would take the disciplinary actions that they are claiming more seriously.”

Diesfeld said she wants more transparency from MU, including data about where clusters have formed.

But as France worried and Diesfeld found out, even cautious students can feel the effects.

“I feel safe because I personally am taking necessary precautions,” France said. “But, I’m also aware that there are so many students and faculty members who aren’t taking it seriously, and I have to cross paths with them on a daily basis. It’s worrying to know that there are so many people around me who aren’t taking this seriously and that could result in me or my friends getting sick.”

On Tuesday, 93 students were in isolation for testing positive, and 16 were in quarantine, meaning they had close contact.