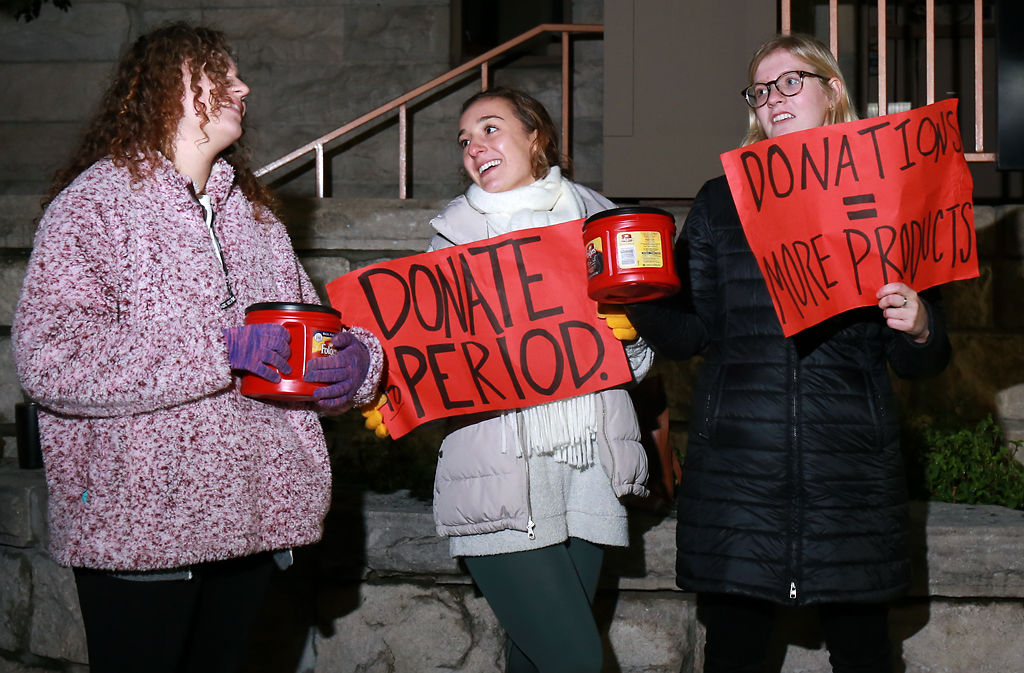 From left, Jacey Schank, Vivian Herzog and Sunshine Kelleher hold signs and cans waiting as people donate money to PERIOD on Oct. 12 in downtown Columbia. Schank is one of the founding members in the group. 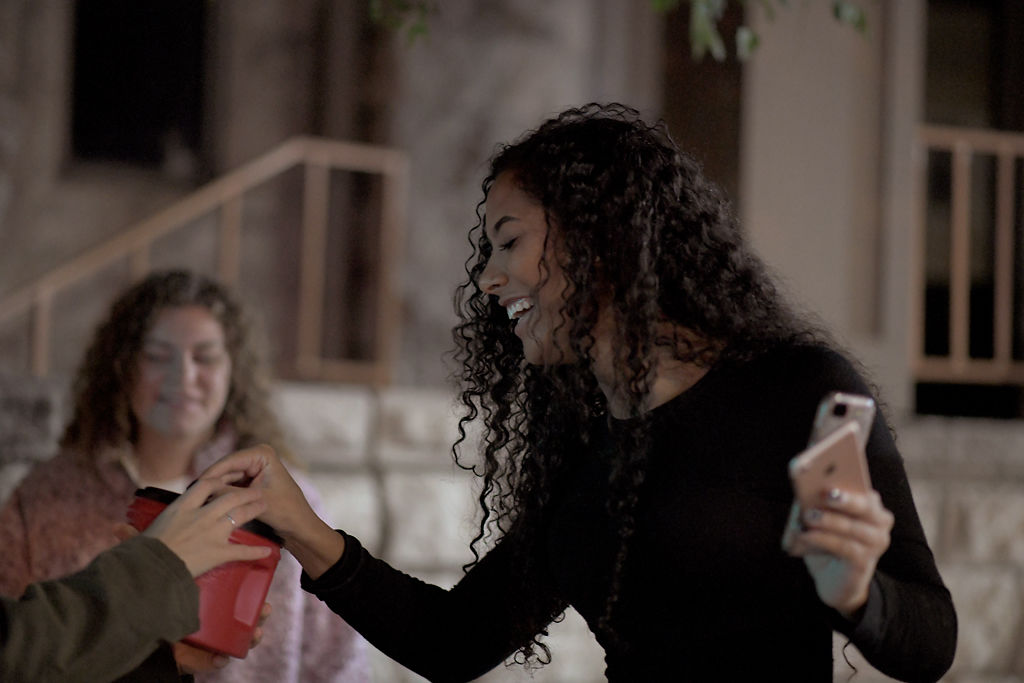 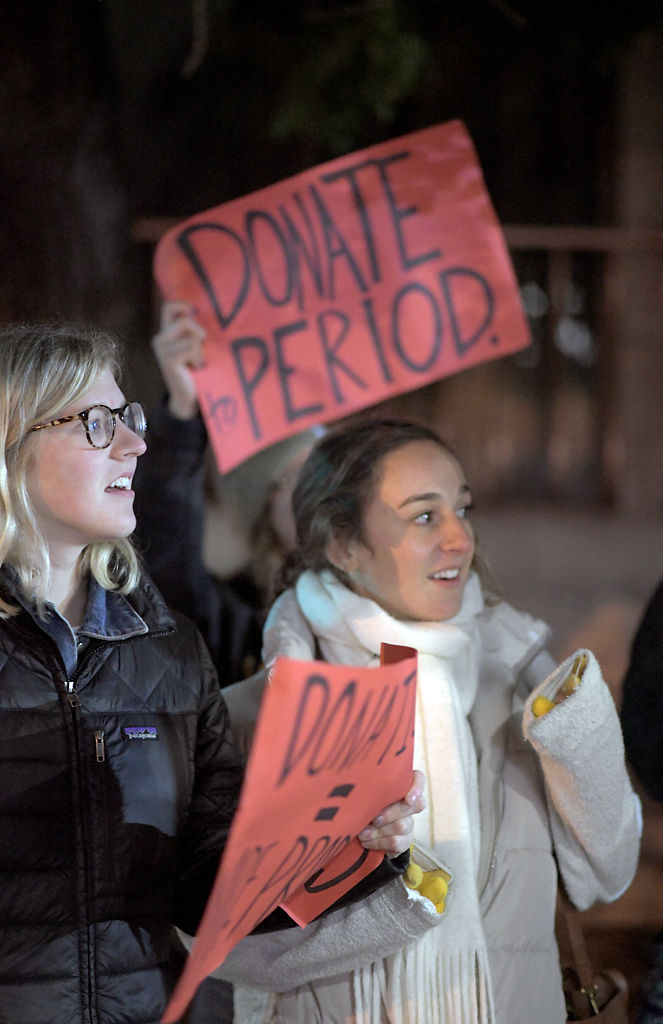 Vivian Herzog, center, and Sunshine Kelleher hold signs asking for donations on Oct. 12 in downtown Columbia. Herzog and Kelleher are both sophomores at the University of Missouri. Kelleher joined PERIOD when she was a freshman and Herzog joined this year. 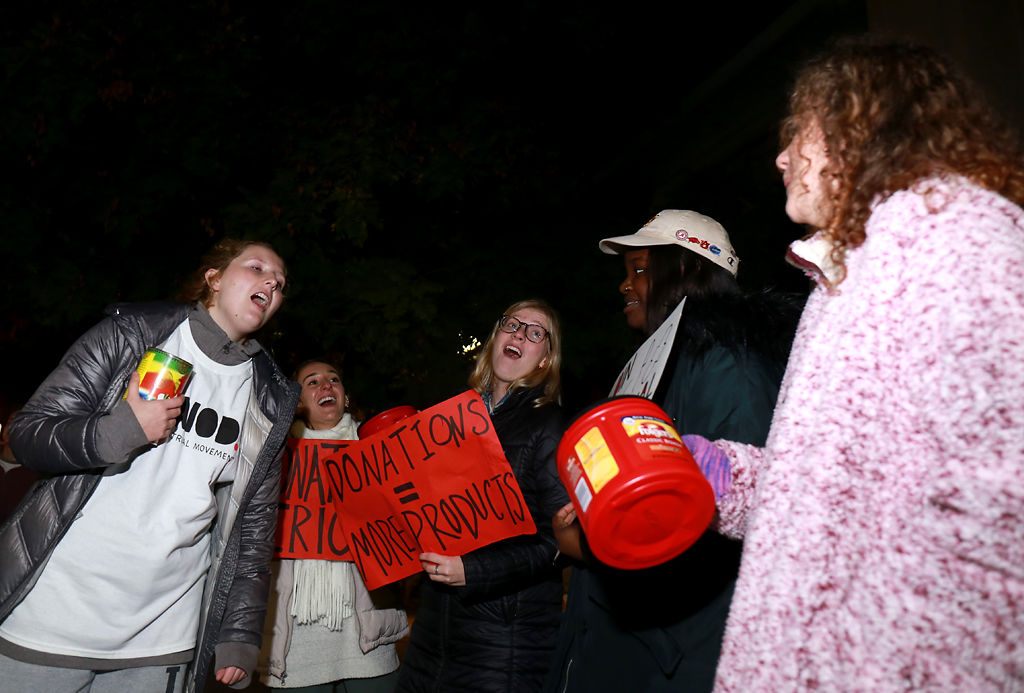 From left, Erica Overfelt, Vivian Herzog, Sunshine Kelleher, Jessica Edoho and Jacey Schank gather for canning on Oct. 12 in downtown Columbia. Edoho and Overfelt have been friends since high school. When Overfelt told Edoho about PERIOD, Edoho decided to join the group.

From left, Jacey Schank, Vivian Herzog and Sunshine Kelleher hold signs and cans waiting as people donate money to PERIOD on Oct. 12 in downtown Columbia. Schank is one of the founding members in the group.

Vivian Herzog, center, and Sunshine Kelleher hold signs asking for donations on Oct. 12 in downtown Columbia. Herzog and Kelleher are both sophomores at the University of Missouri. Kelleher joined PERIOD when she was a freshman and Herzog joined this year.

From left, Erica Overfelt, Vivian Herzog, Sunshine Kelleher, Jessica Edoho and Jacey Schank gather for canning on Oct. 12 in downtown Columbia. Edoho and Overfelt have been friends since high school. When Overfelt told Edoho about PERIOD, Edoho decided to join the group.

Seventeen MU students met for their second club meeting of the semester. After mapping out their goals to serve the community, they ran through the usual icebreakers. Members shared their names, year in school and majors.

But at this gathering, they added one more fact: the stories of their first periods.

Some laughed through their anecdotes. Others nodded empathetically. Most said they did not know what to do when it happened.

“I was in fifth grade, and I remember I got it at home,” Ellie Bonucci, president and a founding member of MU’s chapter of PERIOD, said. “I told my mom, and she was, like, ‘Oh, my stars!’ and walked away.”

PERIOD is a nationwide nonprofit organization promoting what it calls a menstrual movement. The focus is on service, education and advocacy: The national group donates “PERIOD packs” (nine tampons and six sanitary napkins) to people who are economically disadvantaged, reduces the socialized stigma around menstruation and works to remove the luxury tax charged on menstrual products.

Bonucci said one way the MU club localizes the national mission is to create community change. Members work in partnerships with organizations such as Tiger Pantry, the MU Women’s Center, Aunt Flow and the Associated Students of the University of Missouri.

Tiger Pantry offers food assistance, free toiletries and more to MU students or employees in need. Through the PERIOD chapter’s recent partnership, Tiger Pantry clients can pick up free feminine hygiene products that were collected through drives and donations.

Abby Mauer, fundraising coordinator for Tiger Pantry, said the products donated from the PERIOD chapter are from national brands, like Kotex, rather than the generic products originally supplied by Tiger Pantry.

“Most of our clients love that we hand that out because that’s $10 to $20 less they have to spend that month,” Mauer said. “Our clients really like it. They’re really disappointed when we run out.”

Mauer said her clients sometimes hesitate to explicitly request tampons; they often ask, “Can I have some of those?” Because of this, she said she wondered at first how they would react to new, reusable silicone menstrual cups that came from the partnership with the PERIOD chapter. After Tiger Pantry had regularly offered the menstrual cups for about a month, the clients started to try them, Mauer said.

“It’s a more sustainable option, especially for people with lower income,” Mauer said. “I’m hoping that they’re into that and continue to use them.”

Jane Kielhofner, vice president of external affairs for the MU chapter, said she wants to open up the conversation on campus about menstruation because everybody knows and cares about somebody who gets a period.

The founder of PERIOD’s national organization, Nadya Okamoto, said in an email that she wanted to make it as easy as possible for people around the country to join the movement. More than 150 chapters exist in high schools, colleges and other communities worldwide.

Since founding the organization in 2014, Okamoto has written a book, organized a world youth activism conference on menstruation and spoken at women’s conferences around the country, including Columbia’s 2018 Women’s Leadership Conference. She said that through her nationwide travel, she has learned the importance of inclusivity in menstruation.

“Women are not the only ones who menstruate,” she said in an email. “Trans men and nonbinary individuals menstruate as well. This is why when I talk about people with periods I use the term ‘menstruators.’”

According to the national organization’s website, PERIOD has provided services for more than 380,000 menstrual cycles as of Tuesday. A $2 donation covers the cost of one menstrual cycle.

A person can be of menstruating age for about 38 years, which can total 450 periods in a lifetime, according anthropologist Beverly Strassmann. Menstruators spend $18,171 on their period, according to the Huffington Post. A 2013 survey of women aged 18-54 conducted by the Free the Tampon Foundation stated that:

In addition, people who buy menstrual products pay the “tampon tax,” meaning that they are subject to the state sales tax on nonessential items. In Missouri, tampons, sanitary napkins and other feminine hygiene products are not covered under a tax exemption for products considered basic necessities, such as groceries and some over-the-counter medications. Missouri has a 4.225 percent general sales tax.

PERIOD’s MU chapter advocates for public policy change through a partnership with a student-run lobbyist organization that bridges the gap between students and lawmakers. Every year, eight interns work with the legislators at the Capitol to pass legislation especially pertinent to students, executive director Natalie Butler said. This year, the student lobbyist group and PERIOD are working to find ways to make menstrual products more accessible and affordable.

Butler said members of the student group try to learn everything they can about each legislative topic before they talk with the legislators in Jefferson City. Members have comprehensive conversations with each other, which have helped reduce the stigma around talking about topics such as menstruation or sexual assault on campus, she said.

Kielhofner said MU’s PERIOD chapter is pressing to open up those conversations and eliminate taboo. As a public health major, she said she loves creating conversations about stigmatized topics. For example, when she was a sophomore, she wrote a research paper about male circumcision. That same year, she learned about the national menstrual movement.

“That (reducing the stigma) is one area that I want to grow with the club,” Kielhofner said. “What we try to do is have these meetings that open up these conversations and have these icebreakers.”

Bonucci was a freshman in high school when she first took notice of the stigma around menstruation. She was sitting in the student cheering section before a volleyball game when a senior shouted to the crowd asking for a tampon.

“Everybody was mortified, and everybody was like, ‘How did you just say that?’” Bonucci said.

MU’s PERIOD chapter meets on the third Tuesday of the month. Bonucci said having open conversations about menstruation with everyone is important.

“We are cultured to think that something like this is private,” she said. “More than half the population has a uterus, so it’s natural. It’s not like we choose it. Let’s just talk about it.”

What even is a menstrual cup?

Leona Chalmers was too busy for her period.

As an actress during the early 1900s, she was worried every month that she would bleed through her white costume. Tampons weren't in use until the end of the 1920s, so she wore a belt and girdle attached to a long pad.

Chalmers' six-day work weeks became the inspiration for the first commercialized menstrual cup, which was patented in 1937.

A menstrual cup is a reusable, funnel-shaped cup that internally collects fluid for up to 12 hours.

Interested in trying it out? Here are some things to consider:

Sustainability: On average, people who menstruate use 11 to 30 tampons each cycle, according to a 2007 study conducted by the Tampon Study Group. A person can go through about 5,000 to 13,000 tampons throughout a menstrual lifetime. The Diva Cup's website suggests replacing a menstrual cup annually, but some websites claim a menstrual cup has a 10-year lifespan.

Chemical-free: Sanitary napkin and tampon manufacturers are not required by law to print the chemical list on their packaging, but these products are generally made from rayon and bleached cotton. This can lead to the development of dioxin, which is linked to increased risks of endometriosis, according to Assembly Bill 2820 in the California State Legislature. Menstrual cups are made of hypoallergenic silicone and do not have these chemicals.

Budget-friendly: One menstrual cup is about $30, but it has longer lifespan than its disposable counterparts.

Maintenance: You must rinse the menstrual cup with clean water in between uses. This is not ideal for public restrooms or for people who do not have access to clean water. Refraining from proper cleaning can result in infection.

Learning curve: For beginners, removing a menstrual cup can require more coordination than removing a tampon or sanitary napkin.

Finding the perfect fit: Cups come in different sizes based on several factors, such as age, flow intensity and cervix length. Charts online can help first-time menstrual cup buyers find the correct fit, which can seem daunting compared to the one-size-fits-most standard for sanitary napkins and tampons.

Tampons, diapers are taxed higher than groceries. That could change.

If passed, the bill would lower the tax for feminine hygiene products, diapers and incontinence products from 4 percent to 1 percent.