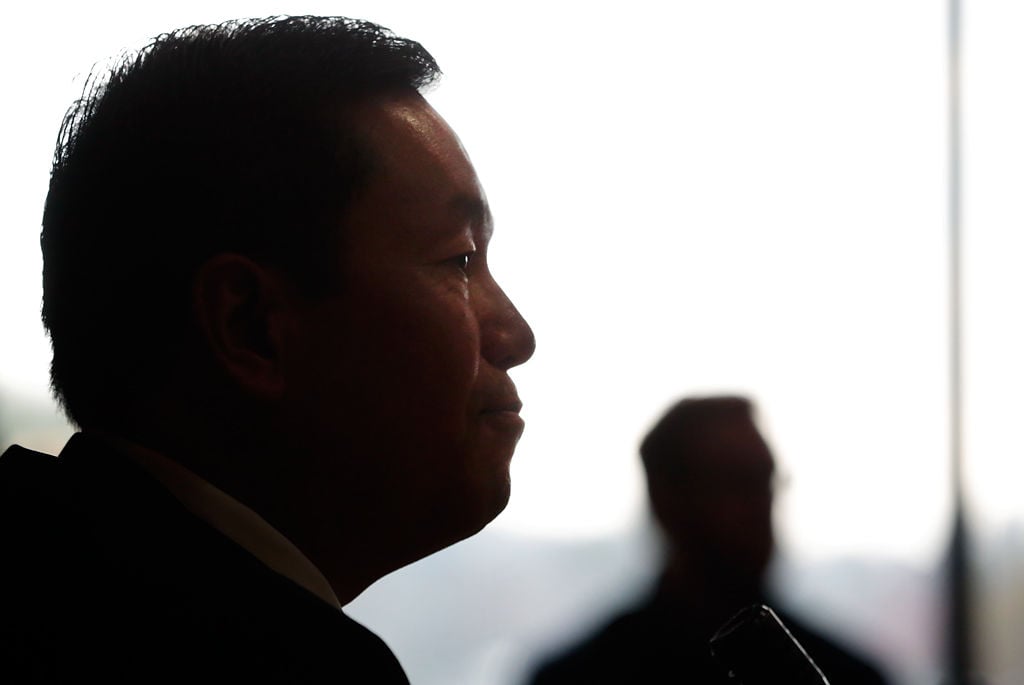 Mun Choi looks at the audience Wednesday morning after being announced as the 24th University of Missouri System president. 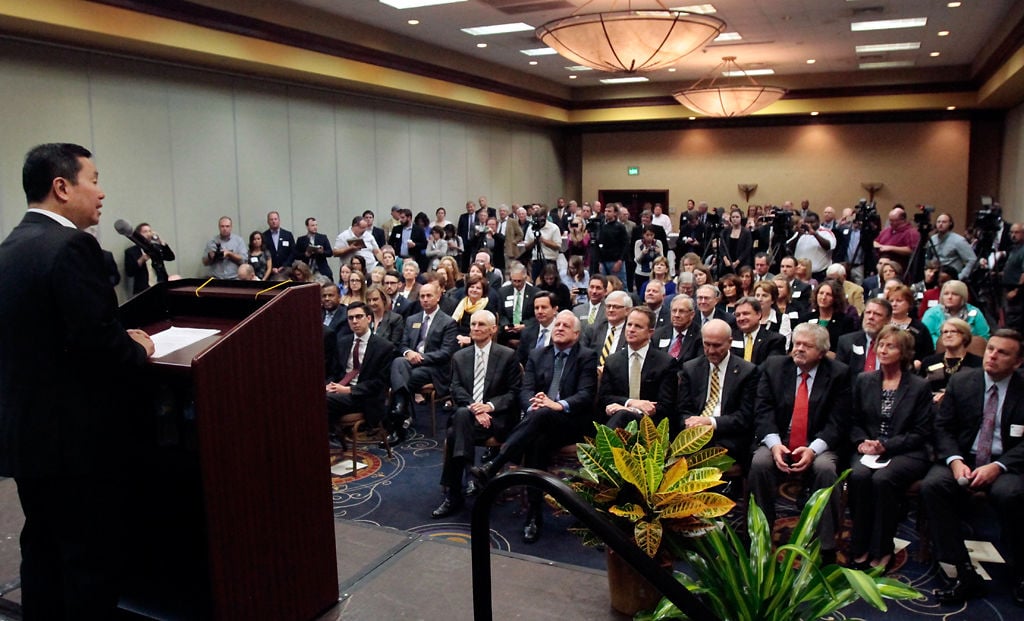 Mun Choi speaks during a news conference announcing him as the next UM System president. 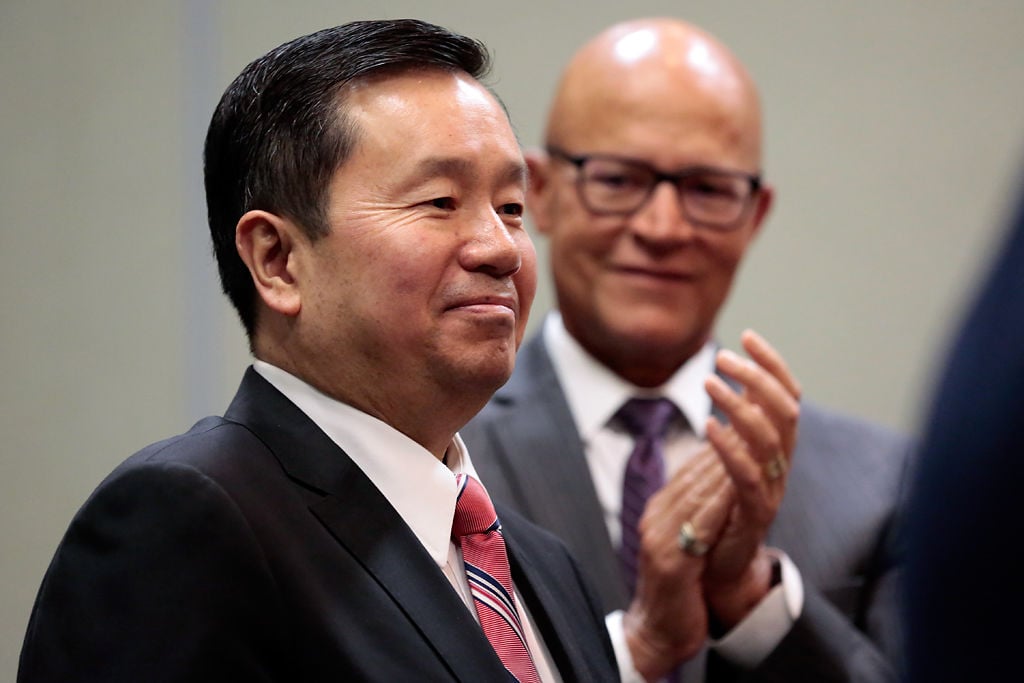 The next UM System president, Mun Choi, is congratulated. He replaces Interim UM System President Michael Middleton, who has held the role since November 2015. 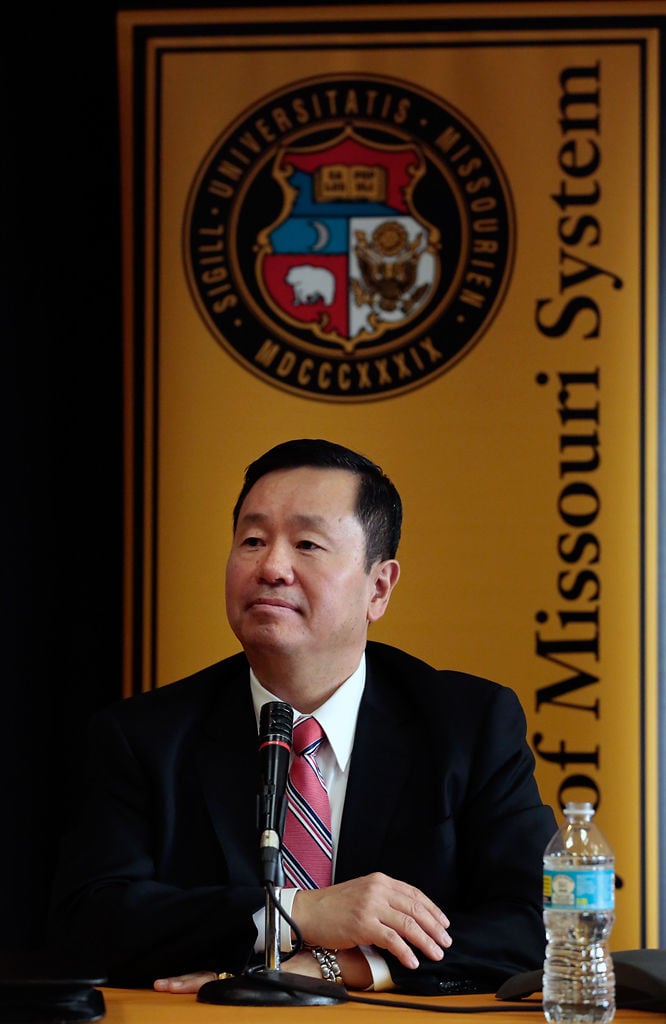 Mun Choi listens to a member of the audience during the news conference to announce him as the 24th UM System president. 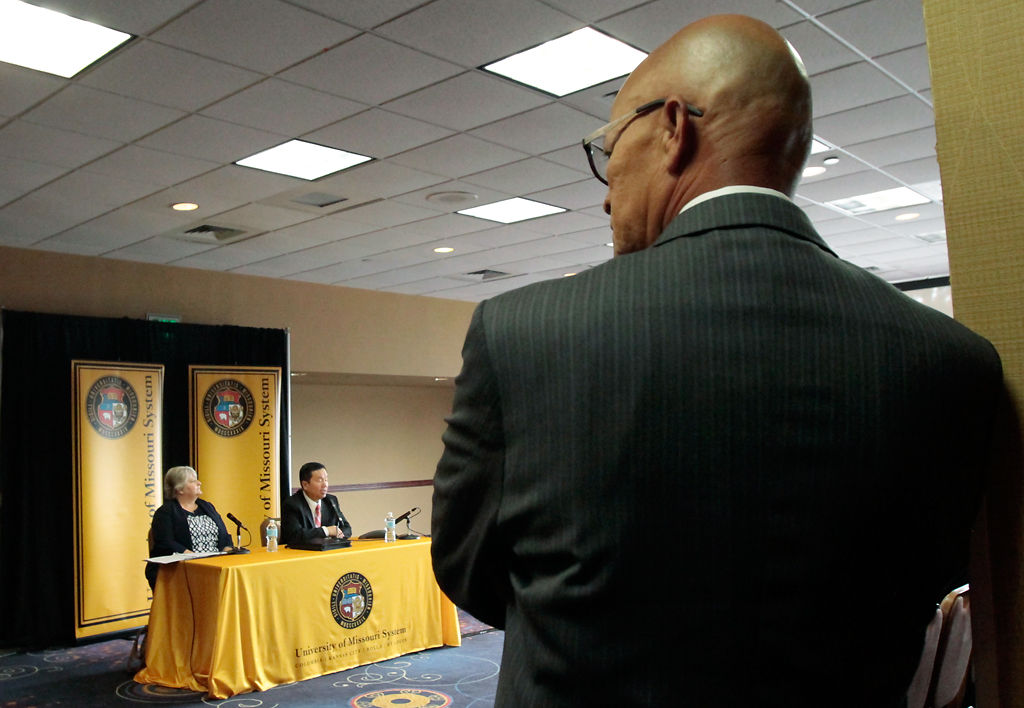 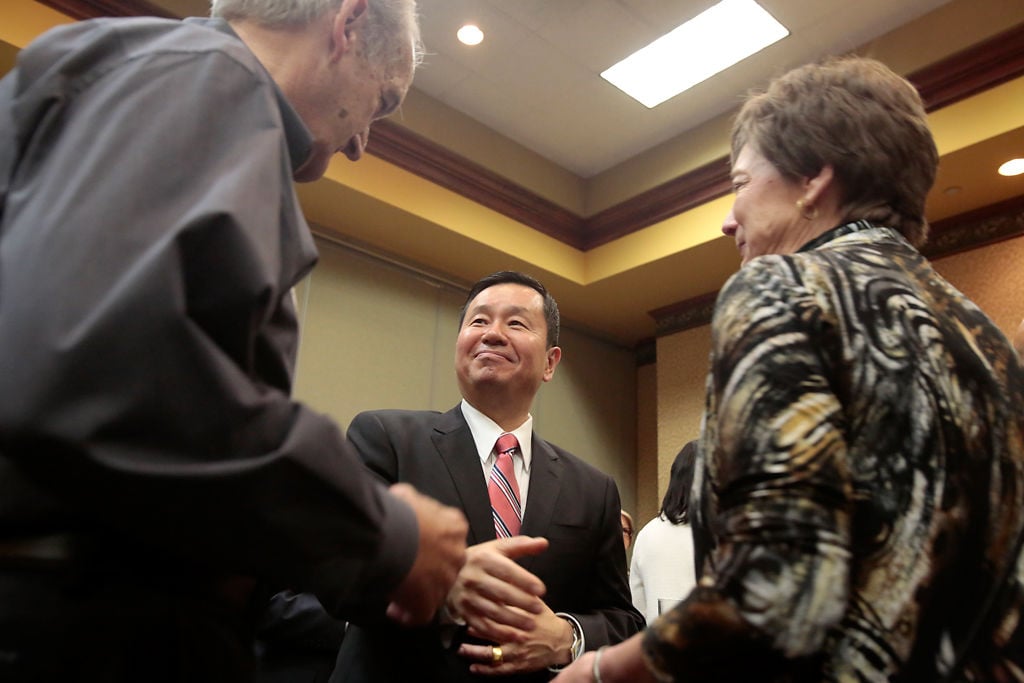 Mun Choi greets Dick and Donna Otto after a news conference announcing him as the next UM System president.

Mun Choi looks at the audience Wednesday morning after being announced as the 24th University of Missouri System president.

Mun Choi speaks during a news conference announcing him as the next UM System president.

The next UM System president, Mun Choi, is congratulated. He replaces Interim UM System President Michael Middleton, who has held the role since November 2015.

Mun Choi listens to a member of the audience during the news conference to announce him as the 24th UM System president.

Mun Choi greets Dick and Donna Otto after a news conference announcing him as the next UM System president.

When he was provost at the University of Connecticut, he heard students had raised enough money to create a free or low-cost introductory chemistry textbook. His office donated $100,000 to create more.

As a department head for mechanical engineering at Drexel University in Philadelphia, Choi paid attention when people complained that the men’s bathroom had fallen into mild disrepair. He found a little bit of money to fix it.

To this day, the bathroom is fondly called “Mun’s room” in his honor, said Gary Friedman, Choi’s former colleague and an electrical engineering professor at Drexel.

Choi — whose first name is pronounced "Moon" — was introduced Wednesday in Jefferson City as the 24th president of the University of Missouri System. He’ll still care about the details, but he also plans to tackle big challenges facing the four campuses, he said at a news conference.

His tallest order will be repairing relationships with students and the Missouri legislature after protests, strikes and campus unrest led to the resignation of Choi’s predecessor, businessman Tim Wolfe, and former MU Chancellor R. Bowen Loftin.

Although he offered few concrete plans to repair ties within and outside the system, Choi emphasized his commitment to listening as he begins meeting Missourians.

“The voices of faculty, students and staff, the true heart of the institution, matter to me,” he said. “I will be meeting with everyone involved and, more importantly, listening to them.”

He is familiar with these types of issues. In his time as UConn provost, a position he’s held since 2012, Choi has faced both student unrest and graduate student unionization, two issues prominent at MU in the past year.

“Really, we have to create an environment that is inclusive, collegial and, above all, respectful,” Choi said. “There are obviously areas where we can improve, but that’s not unique to the University of Missouri System. But I’ll need to meet all of the stakeholders and listen.”

Last November, hours after Wolfe’s resignation, UConn President Susan Herbst sent a letter to the student body stating her intention to reorganize diversity positions at the school. Earlier this year, the university hired a chief diversity officer, according to the school’s student newspaper, The Daily Campus.

Choi said he was aware of the demands issued last year by MU student activist group Concerned Student 1950. He again emphasized the importance of communication.

“It’s also important for all of us to open that line of dialogue with students, with faculty and with staff members so that we can avoid dramatic action and so that they don’t feel that their voices are not heard. So it’s going to be a very welcoming environment where I can listen and learn.”

In October 2015, Choi was involved when the school agreed to a contract with its graduate students, who had been trying to organize with the United Auto Workers for several years.

He took a proactive role in working with the graduate students, said Sally Reis, UConn vice provost for academic affairs.

"While the Union and the University have not always immediately agreed on every issue, we have been able to develop a constructive working relationship that we believe will last long into the future," Todd Vachon, president of the union, said in an email. "We hope Dr. Choi will bring this constructive approach from UConn to the University of Missouri in its engagement with the union there."

Choi said his goal during that process was a seamless transition for teachers and students, but he couldn’t guarantee anything for MU’s Coalition of Graduate Workers, a graduate student union seeking formal recognition from MU and the UM System.

A statement from the coalition said graduate students hope Choi will end the civil lawsuit between the group and the UM System Board of Curators and recognize the union.

Salcuk Guceri hired Choi in the early 1990s at the University of Illinois in Chicago. It became apparent quickly that Choi was an excellent communicator with an impressive academic background, Guceri said.

In Guceri’s letter recommending Choi to be president of the UM System, he lauded Choi’s ability to reach different groups of people.

“He has an exceptional ability to relate to every constituent of an academic institution, from students to faculty, staff, alumni, and external bodies such as the corporate world and the legislative elements,” Guceri said in the letter.

Choi taught at the University of Illinois-Chicago with Guceri for seven years before joining the faculty at Drexel University.

In all of his endeavors, it was apparent to his colleague at Drexel, Yury Gogotsi, that Choi was a “born leader.”

“There are some people for whom administration is easy,” Gogotsi said. “For example, he took the position of department head of a department that wasn’t very easy to manage, and he pulled it to success.”

Gogotsi recalled Choi’s skill at making the department more collaborative and encouraging faculty to submit grant proposals and participate in research. He said he expects Choi’s background in academics will help him focus on improving research, visibility and rankings for the UM System.

Choi has a long career in research. After finishing his doctorate at Princeton University, he completed a post-doctoral research fellowship at the National Institute of Standards and Technology, which promotes innovation and industrial competition.

That background led to his interest in the UM System, which includes MU, a Research One school and member of the invitation-only Association of American Universities, and the science- and technology-heavy Missouri University of Science and Technology in Rolla.

“But more importantly, during the process, I’ve been daily discussing with the Board of Curators and senior leadership, and I felt there was just such a strong commitment for the University of Missouri to continue its rise as a top flagship research school,” he said.

Professors at system campuses said they were pleased with Choi’s long career at public universities.

“His academic background is something that a lot of people are excited by," said Gerald Wyckoff, professor of biological sciences and the chair of the Faculty Senate at the University of Missouri-Kansas City. "It injects more faculty perspective into the university ecosystem. Everyone is optimistic and they hope that someone who has been a dean, been a provost, would understand where we’re coming from.”

Among faculty Wyckoff has talked to, there’s a sense that someone like Choi, who has worked his way up through academia, will be able to make sure faculty concerns are addressed.

“Given the year previous, there’s been concerns about how to make it clear to the Missouri community that what we’re doing should be something they should value," he said.

Keith Stine, a professor of chemistry at the University of Missouri-St. Louis, said he and other faculty sent the search committee some characteristics they hoped for from a new president — a deep understanding of academia, a good listener and thoughtful responses to concerns from everyone in the community. At first glance, Stine said, he believes Choi meets those requirements.

Choi, 52, was born in South Korea and moved to Chicago with his family. His parents owned a successful clothing business that is still in operation.

He and his wife, Suzanne, have three children, two of whom are studying engineering. His daughter, Cosette, named after the character in "Les Miserables," is in high school.

The Chois will live in Columbia. Their plan is to purchase a home when the school year ends and Suzanne and Cosette Choi can move to town, UM spokesman John Fougere said.

Choi hasn’t been to Columbia yet, but he said he will visit each of the campuses soon. His contract will be made available to the public Thursday, and he will begin work March 1.

The curators selected Choi on Monday after a closed search process that considered academic administrators, corporate executives, lawyers and people from the government or military sector, according to a UM System search fact sheet. The search firm Isaacson, Miller advised in the process.

Mike Middleton, who has served as interim president for nearly a year, will begin sharing duties with Choi before the official handoff in the spring.

Choi's former colleagues say the former engineering professor, dean and provost has all the right qualities to become president of a university.

“Nobody knows him more than I do, and so I’m very confident that he is absolutely the best choice,” Guceri, who has known Choi for more than 20 years, said. “He will rock the institution and bring it up to the next level.”

About the UM System and the president

The University of Missouri was founded in 1839 as the first publicly supported institution of higher education to be established in the Louisiana Purchase territory.

The university had a single campus until 1870, when the School of Mines and Metallurgy was established in Rolla.

In 1963, the university again expanded to better serve Missouri by founding a new campus in St. Louis and through acquiring the University of Kansas City, creating the present four-campus University of Missouri System.

The UM System president is the leader of the four campuses and MU Health Care.

The job description, approved by the presidential search committee in May, was for a president who could create a vision for the system, assemble a leadership team, lead a statewide conversation about diversity inclusion, equity and respect, establish relationships with Missouri officials and promote the system's mission in a way that's valuable to Missouri taxpayers.

Mun Choi has been the provost at Connecticut since 2012. The position is the university's chief academic officer for its five campuses.