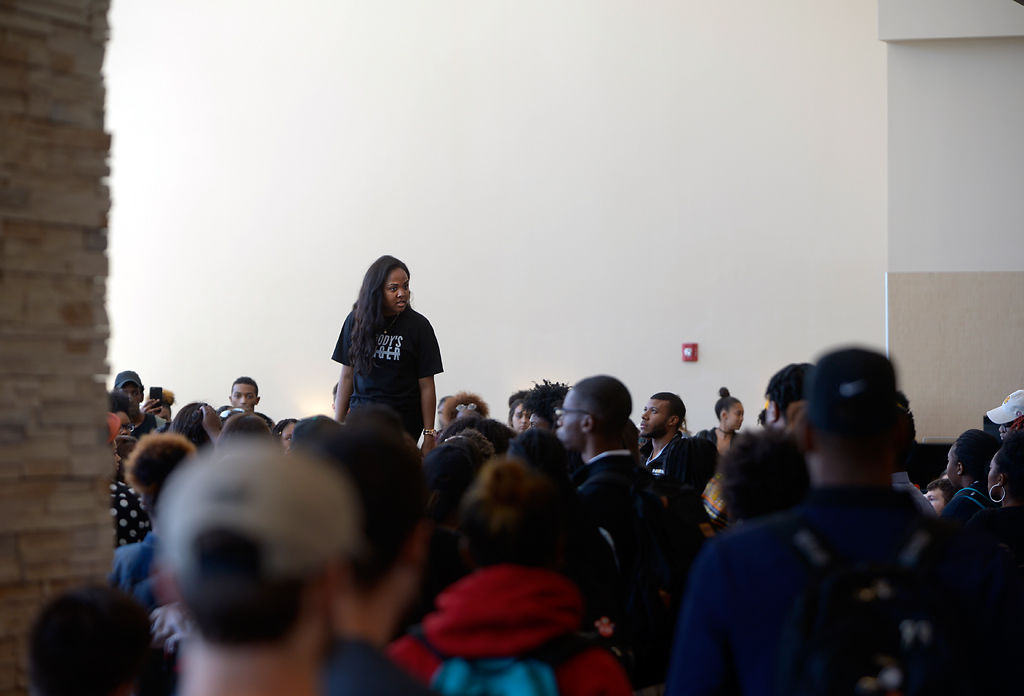 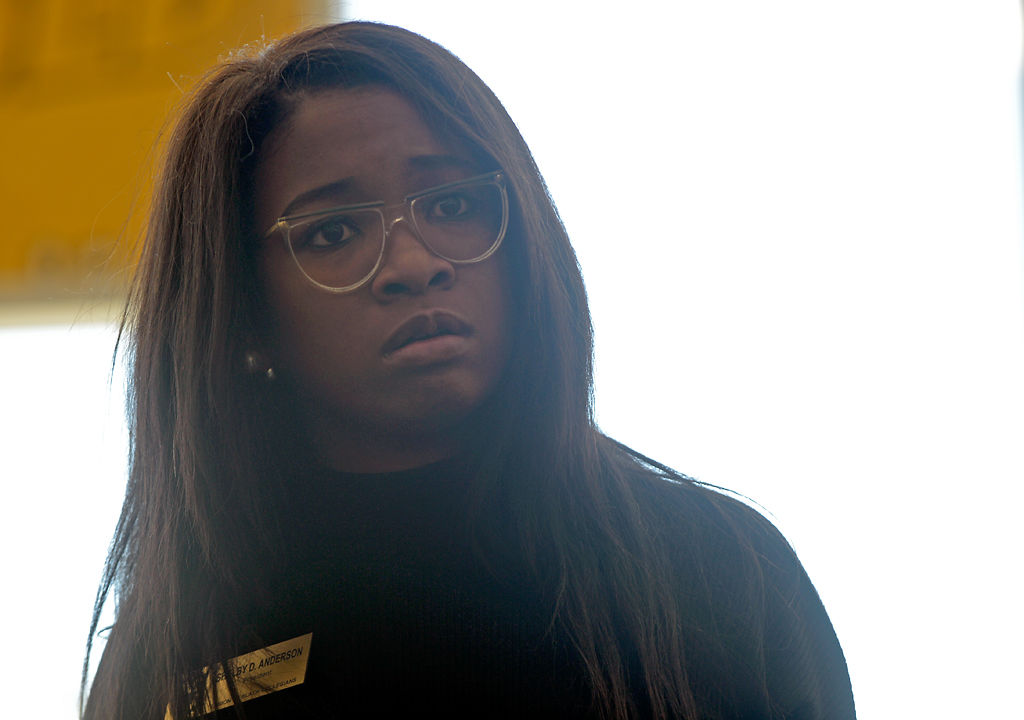 Legion of Black Collegians President Shelby Anderson addresses students during a protest Wednesday at the MU Student Center. "It's 2016, and I'm still made to feel like I don't belong on this campus," Anderson said. 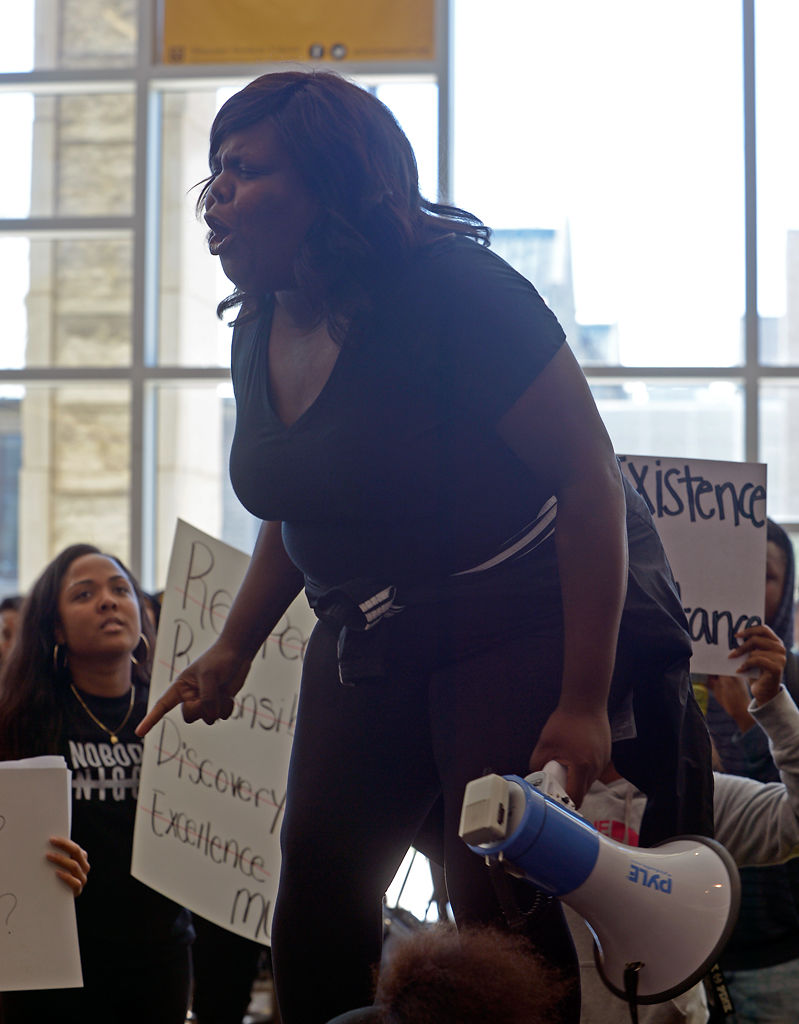 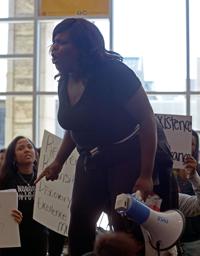 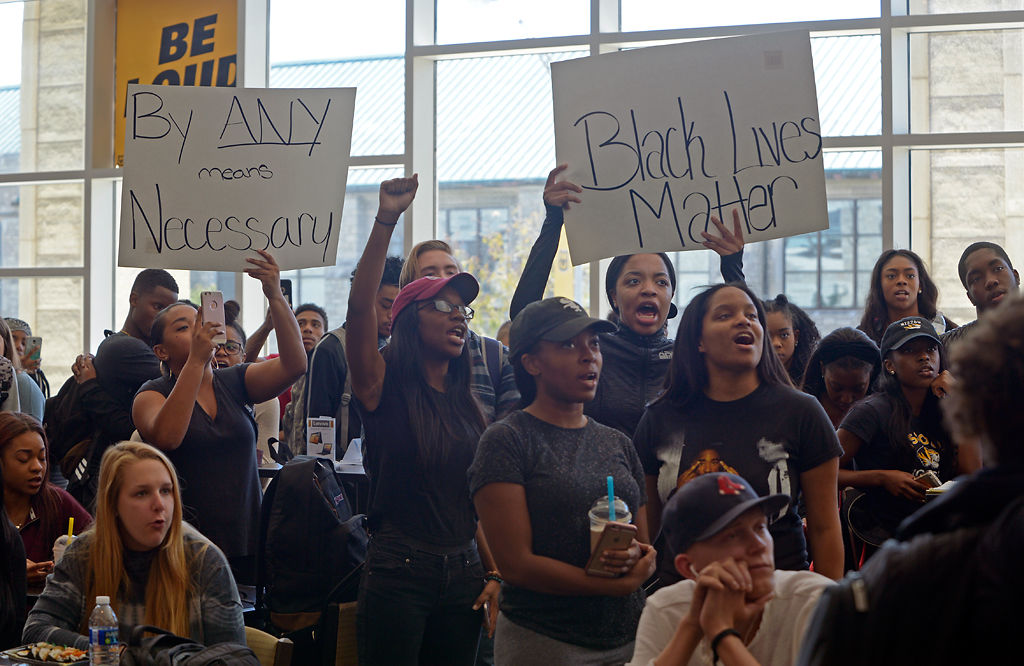 Students chant, "We have nothing to lose but our chains," during a protest Wednesday at the Student Center. A statement released by the Legion of Black Collegians on Twitter said, "To say that we are disgusted is beyond an understatement."

Legion of Black Collegians President Shelby Anderson addresses students during a protest Wednesday at the MU Student Center. "It's 2016, and I'm still made to feel like I don't belong on this campus," Anderson said.

Students chant, "We have nothing to lose but our chains," during a protest Wednesday at the Student Center. A statement released by the Legion of Black Collegians on Twitter said, "To say that we are disgusted is beyond an understatement."

The MU chapter of the Delta Upsilon fraternity has been placed on emergency suspension by its international office.

COLUMBIA — Almost one year after members of MU's Legion of Black Collegians were targeted by racial slurs, members said they were again harassed Tuesday night outside an MU fraternity house.

The fraternity, Delta Upsilon, was suspended by MU and by its governing body Wednesday.

According to a statement from the Legion, female members of the Legion were walking outside of the Delta Upsilon fraternity at Rollins Street and Tiger Avenue when a group of white students passed. One of the white women shouted, "Look at those niggers looking at us."

Other Legion members arrived and MU Police responded, according to the statement. Fraternity members then began recording the interaction and shouted obscenities at the Legion members, including racist and sexist slurs. Some police officers worked to disband the growing crowd, while others "attempted to control members of the Legion" instead of focusing on people yelling from the fraternity house, the statement said.

"Another officer used excessive verbal force WITH his hand on his gun, in attempts to calm one of the Legion's members, who was rightfully infuriated about the events that had just transpired," the statement read.

MU Police Maj. Brian Weimer said Wednesday that police were investigating all of the events. Weimer said no official reports have been filed against the responding officer.

Austyn Bair, president of the local chapter, declined to comment early Wednesday.  The fraternity will not be able to use university facilities or participate in university activities, including Homecoming, until the suspension is lifted, and all chapter activities have ceased for the time being. The Delta Upsilon International Fraternity will work with the university to investigate if members were involved, a fraternity spokeswoman said.

The Legion said in its statement that it was working with members of MU's administration to address the incident. The group was also adamant that any student who intentionally uses hate speech on campus should be expelled.

An MU statement said police identified the students involved, and the offices of Student Conduct and Civil Rights & Title IX have been notified.

Throughout the day on Wednesday, black students held hands, prayed and talked about their experiences at a protest in the MU Student Center and at a town hall at the Gaines/Oldham Black Culture Center.

Demonstrators at the Student Center wore black and filtered into the first floor study area, standing around tables near the fireplaces. Three students read statements through a megaphone.

"It is 2016, and I am still made to feel like I don't belong on this campus," Legion President Shelby Anderson said.

The crowd chanted, "It is our duty to fight for our freedom! We will love and support each other!"

"I can't prevent someone from making a racial slur like this — you can't be everywhere all the time," he said. "But we can raise our expectations of student conduct and behavior."

In a written statement, Foley said any student found in violation of MU's nondiscrimination policies "will be subject to discipline, up to and including suspension and/or expulsion."

At the town hall Wednesday night, hundreds of students and faculty packed the auditorium at Gaines/Oldham Black Culture Center and spilled out into the hallways. Those gathered shared their fears, questions and suggestions with university administrators, a representative from MU Police, representatives from the Missouri Panhellenic Association and the Interfraternity Council.

The Legion said it would continue to take action.

"To say that we are disgusted is beyond an understatement," the Wednesday Legion statement read. "It is often said that history repeats itself, but the ignorance that occurs on the University of Missouri's campus always seems to be too familiar. Due to the continuation of an intolerant culture, students of color have been attacked yet again."

In October 2015, members of the Legion of Black Collegians were targeted by racial slurs while rehearsing for Homecoming events on campus. The incident was followed by a month of protests, student demands and a hunger strike that resulted in the resignations of the University of Missouri System president and MU chancellor. Since then, MU has launched several diversity initiatives and has pledged more than $2 million for recruiting and retaining faculty members of color.

A statement from the Legion with regard to yesterday evening and the early hours of this morning. pic.twitter.com/TkoggBKSGP

MU announces a plan to "shoot for the stars" and double its faculty of color, make a commitment to recruit diverse faculty and hire post-doctoral fellows into the tenure-track pipeline.