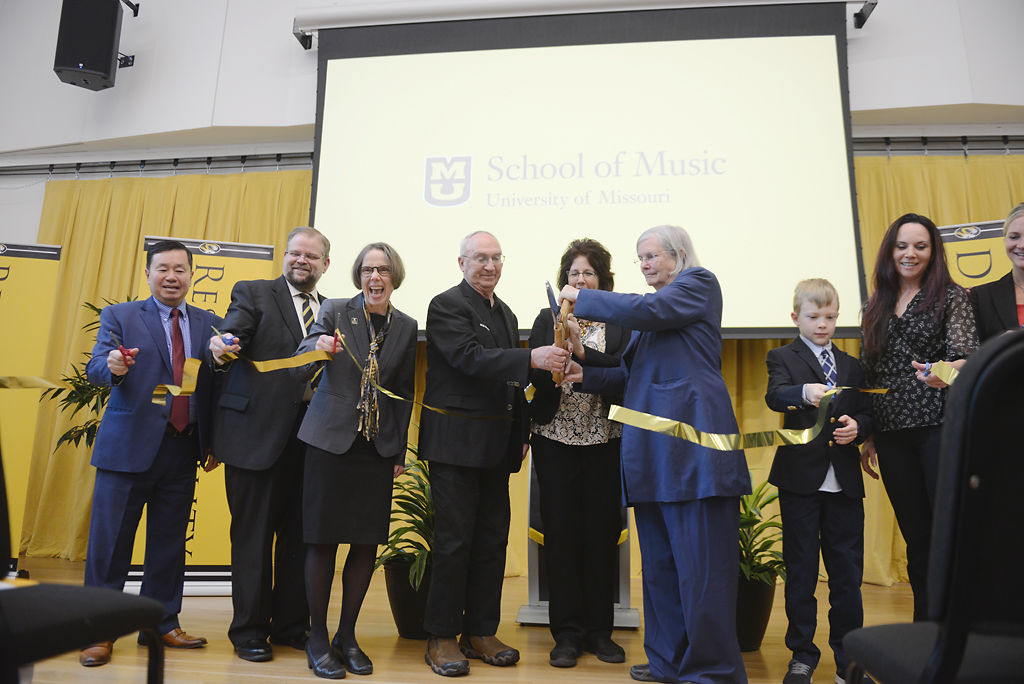 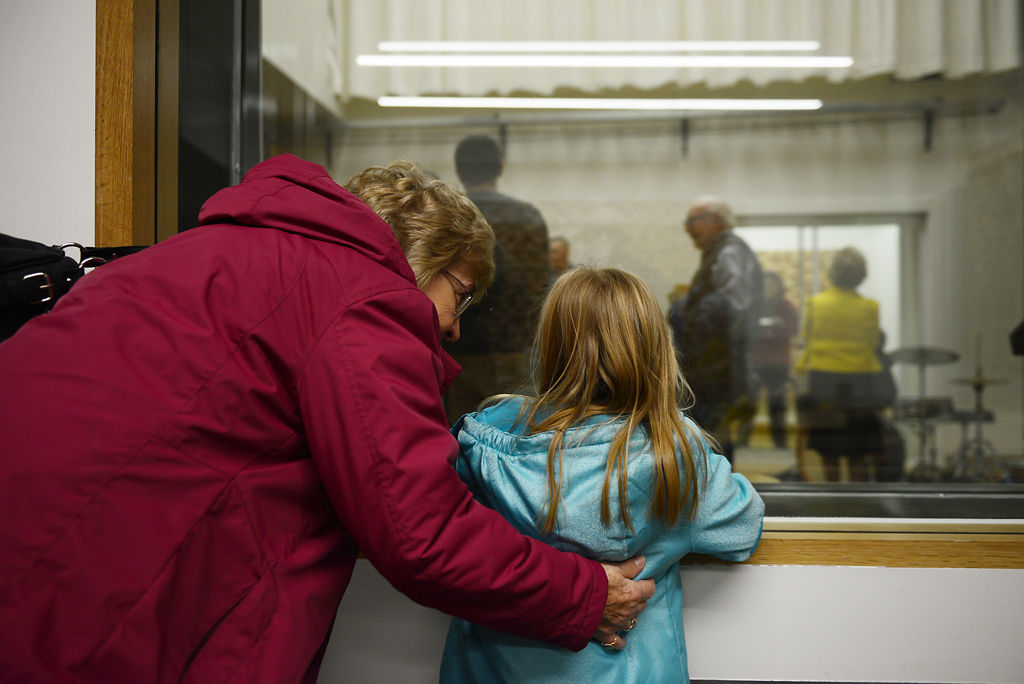 Elaine Gravish and granddaughter Juliette Westhoff, 5, look at one of the new rehearsal spaces Saturday in the Sinquefield Music Center. Following the ceremony, visitors were able to tour the facilities. 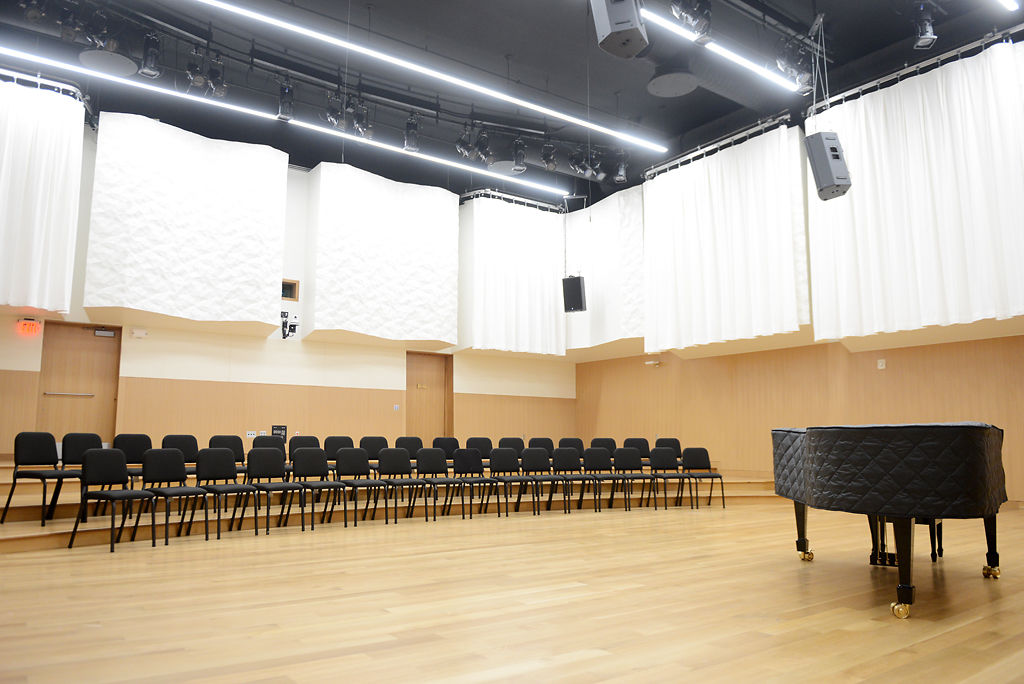 A choral rehearsal space houses chairs and a piano during the grand opening of the Jeanne and Rex Sinquefield Music Center on Saturday morning. At the ceremony, the Mizzou Brass faculty quintet performed "Fanfare," a piece composed by MU music student Ben Rouder specifically for this event. 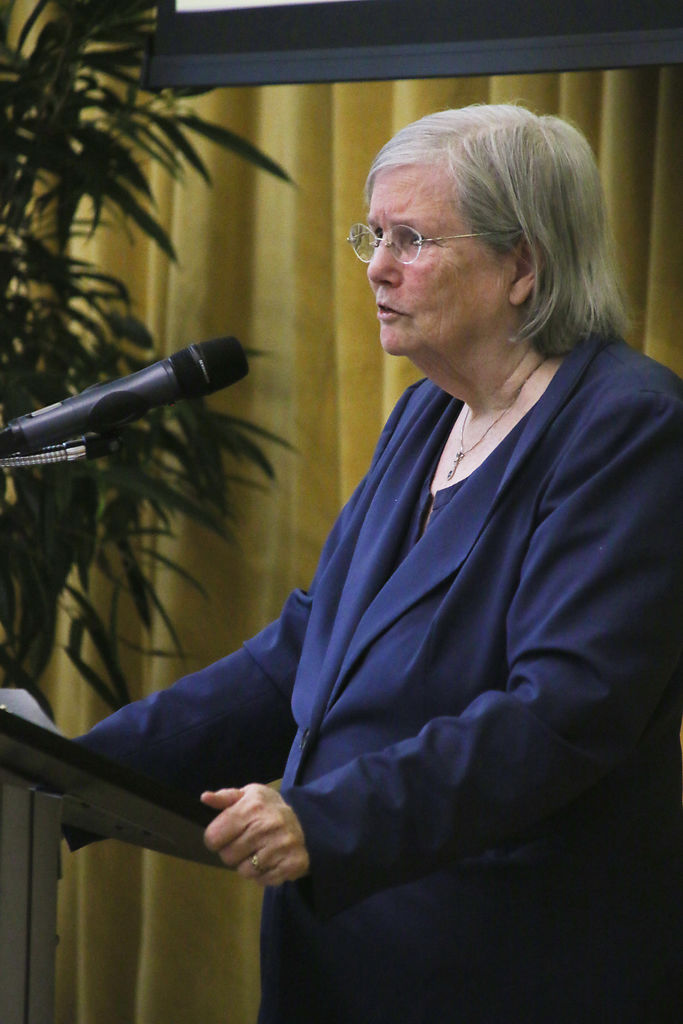 Jeanne Sinquefield delivers remarks during the grand opening ceremony of the new Sinquefield Music Center on Saturday. Sinquefield and her husband, Rex, have donated millions of dollars over the past decade to the MU School of Music. 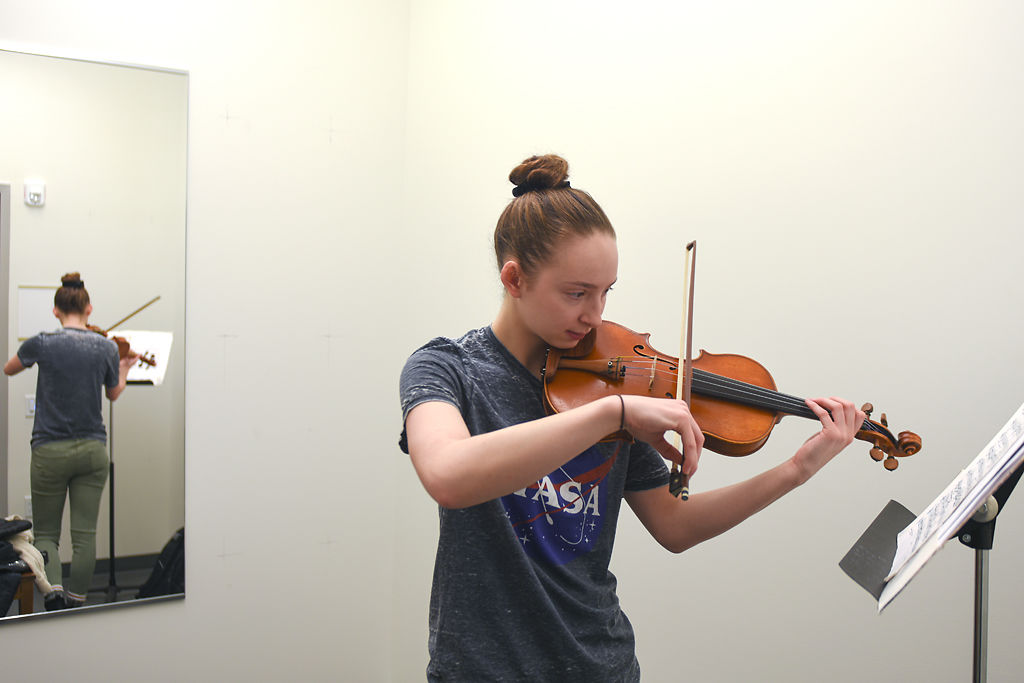 Emile Gephart practices violin in a new practice room  Jan. 23 at the Sinquefield Music Center. Gephart has played for seven years and is now majoring in music. "I've always loved music and I love playing (the violin)," Gephart said. 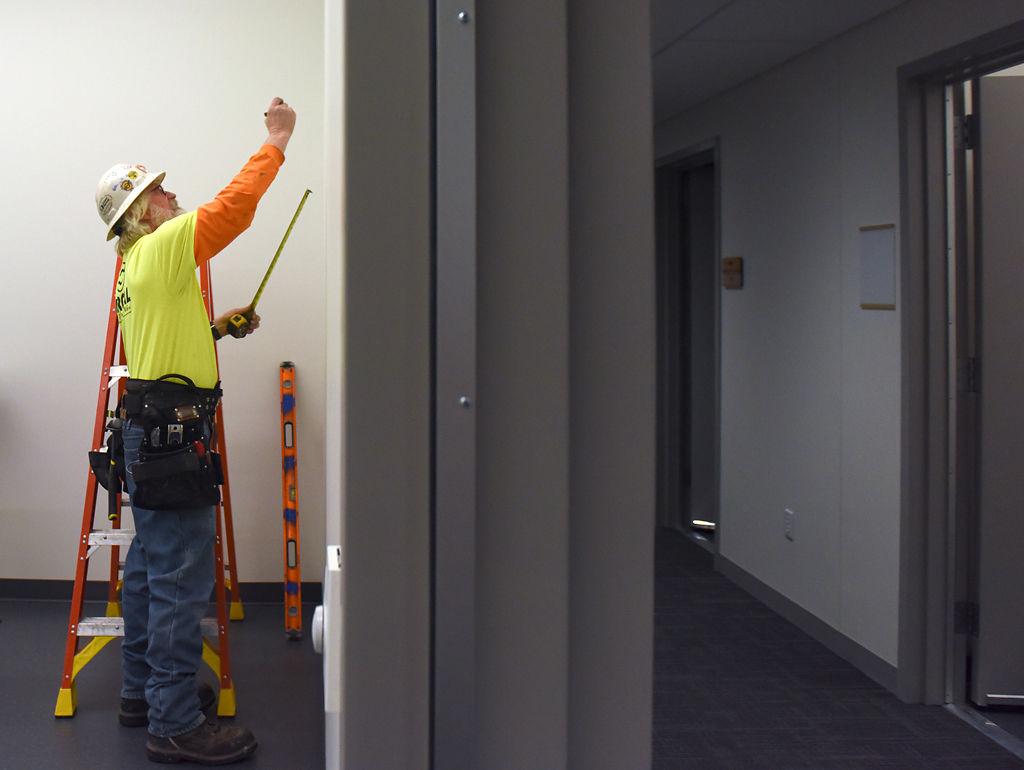 Ralph Wieberg measures a wall for acoustic panels on Jan. 23 at the Sinquefield Music Center. After the major construction of the building, workers focused on building details. 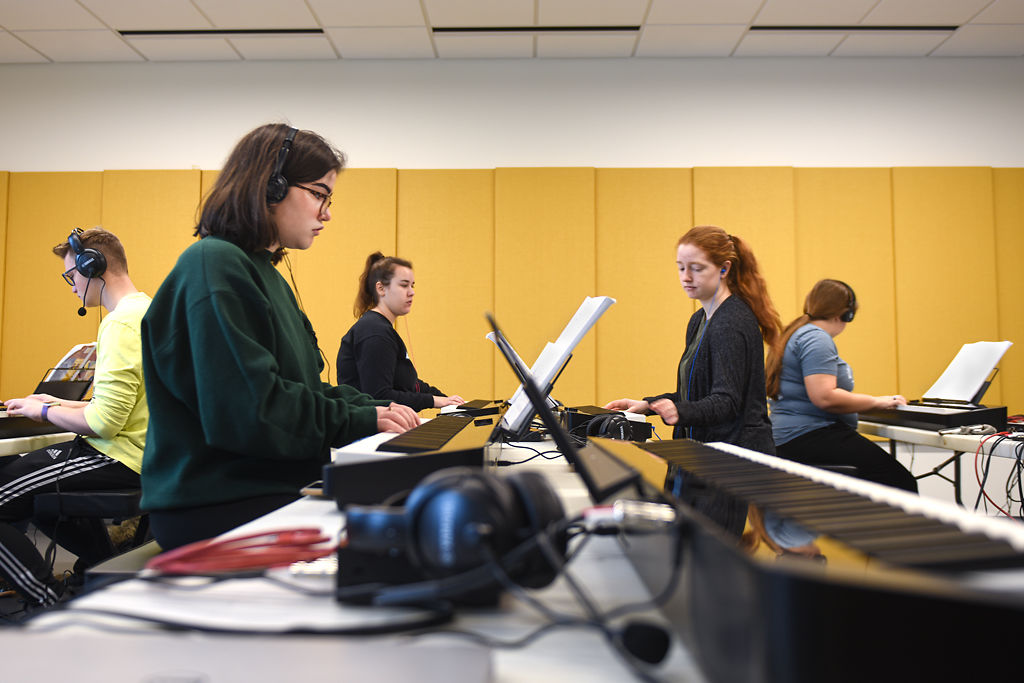 Music majors attend their Level 2 group piano class in the newly constructed music center Jan. 23 at the Sinquefield Music Center. "The new building is a good addition to the campus," MU professor Emma Wohlgemuth said. "It gives students room to realize their potential as musicians." 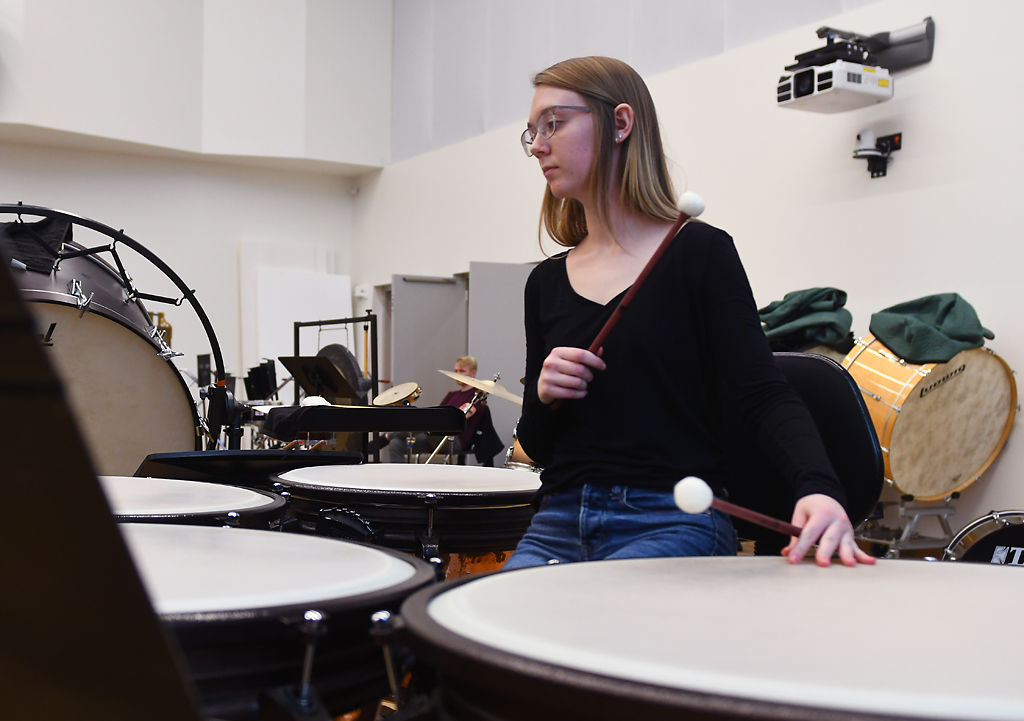 MU music student Taylor Petska plays a timpani in the Instrumental Rehearsal room Jan. 22 at the new Sinquefield Music Center. Petska is a junior and rehearses with the Wind Ensemble class every Monday, Wednesday and Friday. 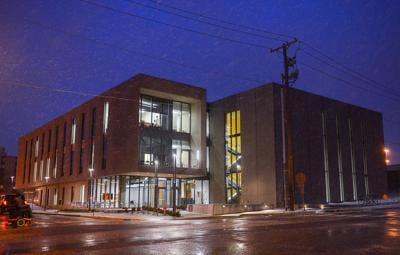 The crowd at the Sinquefield Music Center on Saturday morning was silent as the faculty quintet Mizzou Brass played “Fanfare,” written for the center's grand opening by MU senior Ben Rouder.

The $24 million building at University Avenue and Hitt Street is just down the road from the Fine Arts Building where part of the music school remains. Attendees filled the 140 seats set up in the Instrumental Rehearsal Room, some standing in the back once the chairs were taken.

When "Fanfare" ended, listeners erupted into more than 20 seconds of applause as the composer and the players stood. The piece was fitting — the building was designed as part of the Mizzou New Music Initiative, which Jeanne and Rex Sinquefield began in 2009 to focus on composition.

“It’s magical when you sit there and realize this piece of music wouldn’t have been written,” donor Jeanne Sinquefield said of Rouder’s piece and the initiative that led to it.

Earlier in the week, David Myers, director of audio/visual services for the School of Music, pointed out some of his favorite features in the building he helped design.

The walls of the recording studio are lined with black absorbers and ScatterBox grids, or wooden acoustical devices used to diffuse sound. The ceiling is two stories high, and there are four adjustable curtains around the room.

It’s all for one purpose: to control the quality of sound in the room. That’s essential, Myers said, because only the music should come through. A high-quality studio is key to recording new music being created at the school.

“This room is incredibly acoustically pliable, so you can have a room like this where all the curtains are open, and you can have some reverb,” Myers said. He clapped his hands, and a tiny echo followed. “Like it kind of lasts in the room.”

Myers walked over to a pulley system controlling the curtains.

“But if we pull the curtains like this” — he closed one set of curtains, then another — “now the room is different.”

“The idea is that we could have instrumentalists or singers or whoever in these two spaces while there’s loud stuff going on out here,” Myers said, referring to the larger studio. “It completely isolates them. So, you can record full bands at a time and just use this whole space.”

These aren’t the only methods of controlling sound quality in the recording studio. A 6-inch slab of concrete lies under the wooden floor, which is floated above the concrete with neoprene pucks. Additionally, the studio walls are at an angle, making it as if the room is within another room, Myers said.

These measures isolate the studio from the rest of the building.

“The reason for that is that there’s a giant band room over there, and then the concert hall is right around the corner,” Myers said. “If all that sound is bleeding into here, then it’ll ruin your recording and vice versa. So, when we’re banging on the rock band in here and they’re trying to have a piano recital next door, they don’t want to hear each other.”

Myers was also excited about elements in the control room, including the Avid S4 console. “There’s only a handful of them that I know of in the country,” he said. “It’s a mixing console with all the faders and knobs and everything.”

The new rehearsal rooms have been designed to house large ensembles, with acoustical panels lining the walls, adjustable curtains, nearly three-story high ceilings and an acoustical shell hanging from the ceiling.

“Our large ensembles have never had acoustically designed spaces to rehearse in,” Julia Gaines, School of Music director and a percussion professor, said. “This may seem superfluous to an outsider, but rehearsing in a space where you can actually hear the rest of the ensemble is critical to achieving excellence in performance.”

The band’s old rehearsal space in Loeb Hall was a refurbished cafeteria, which meant low ceilings and a large pole that divided the room. Although the pole made it difficult to hear and see each other, the players made light of it — branding it MU’s “seventh column.”

“It was like a meme,” Jane Wang, a sophomore flute performance major, said. “People joked about it all the time.”

“I’m mostly excited for the fact that we don’t have to walk to Loeb anymore, because Loeb is on the other side of campus, and I’m a weak person, and I’m always tired,” Wang said.

The School of Music will now be largely housed in two buildings rather than spread out across seven buildings.

Phase 2 of the music school’s expansion would add classrooms, faculty studios, smaller rehearsal rooms and a concert hall. The timeline and the funding for this is unclear.

Speakers at the event emphasized the importance of playing music in a space designed for that purpose.

“And certainly, the joy of life is in music, and that makes our lives boundless,” MU Chancellor Alexander Cartwright said. “And with this new music center, our extraordinary musicians will have the space and resources they need to create even more of the boundless joy for generations to come.

"Great scholars deserve great spaces," Cartwright said, "and that’s what this is.”

The new music building that opened Monday in downtown Columbia started with a $10 million donation from Jeanne Sinquefield.