Missouri University of Science and Technology received a gift of $300 million, the largest in the history of state higher education, the Rolla campus announced in a news release Monday.

The gift from St. Louis businessman Fred Kummer and his wife, June, will be used to create the Kummer Institute Foundation. It will support new initiatives including:

“This is a tremendous higher education and economic development in Missouri,” UM System President Mun Choi said in a UM news release.

“I’m grateful to Fred and June Kummer for their confidence in Chancellor (Mo) Dehghani to lead the transformation at S&T. I want to commend Chancellor Dehghani for his visionary leadership and persistence.”

At a late-morning news conference, Dehghani said Fred Kummer has “two pillars of his vision” he’d like to see become reality.

“This magnificent gift is a great start to our next 150 years,” he said. “We celebrate our sesquicentennial anniversary starting with this announcement.”

The mission of the Kummer Institute is to transform S&T into a hub of teaching, research and public engagement in technology-focused innovation and entrepreneurship. It also aims to elevate S&T’s stature among technological research universities in the U.S. and energize the economy of Rolla and the state.

“This will be transformational for Missouri S&T and higher education in our state,” Julia Brncic, chair of the UM System Board of Curators, said in the UM release. “This gift will advance opportunities for students, research, communities and Missouri citizens for generations to come.”

Fred Kummer is a 1955 civil engineering graduate of S&T, which was named then Missouri School of Mines and Metallurgy. He met his wife during his time in Rolla, and they both have been major donors to the school for decades, according to the S&T release.

“I owe much of my success to the education I received at Rolla,” he said. “My Rolla experience taught me how to think, how to work hard and how to manage my own career. June and I believe in the mission of this great university, and that’s why we have chosen to invest in S&T’s future success.” 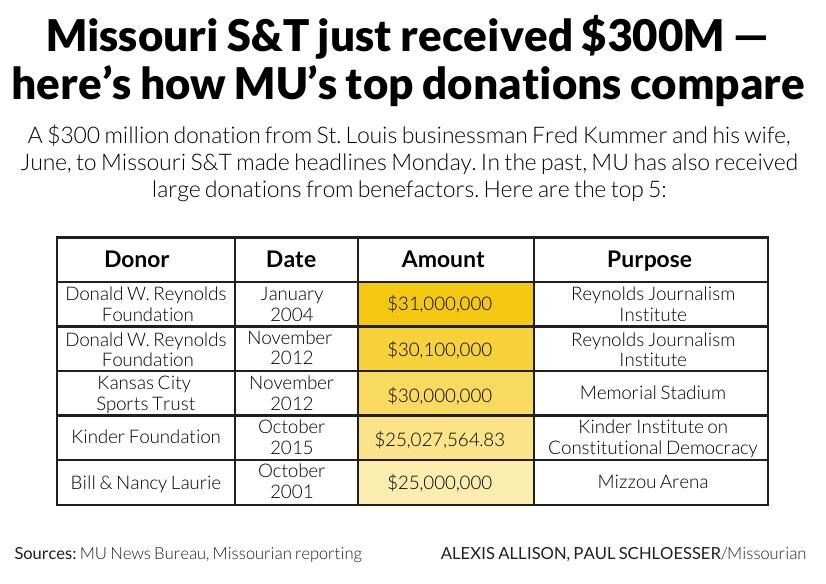