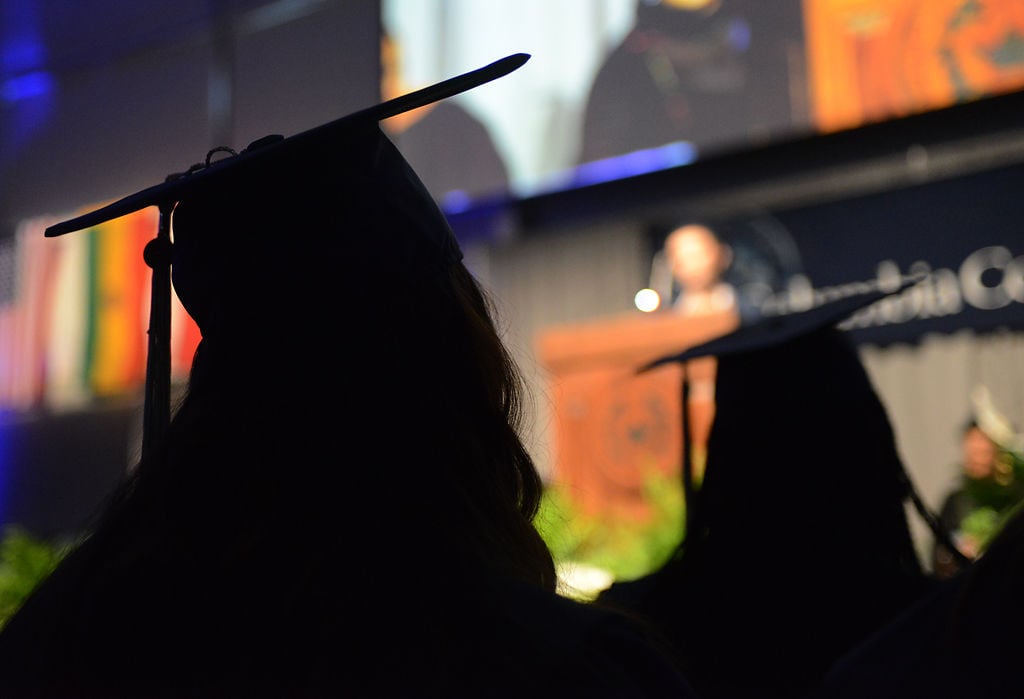 Graduates wait in the audience while Alexandria Bergman gives the commencement address during Columbia College's graduation ceremony on Saturday at Southwell Athletic Complex on Columbia's campus. Columbia offered two ceremonies, one in the morning and one in the afternoon. 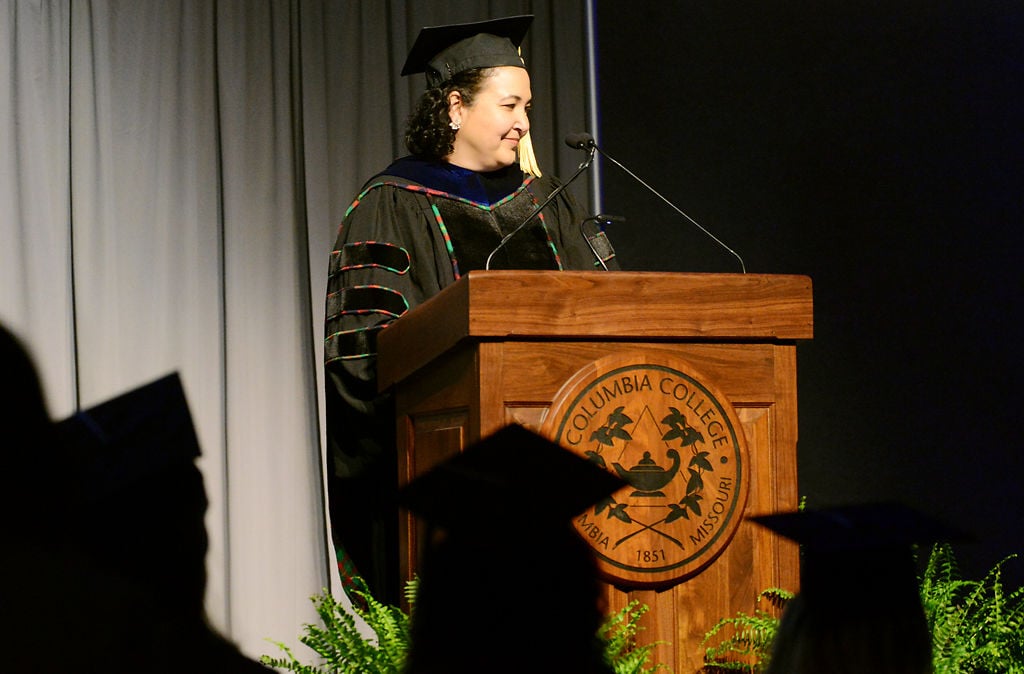 Graduates wait in the audience while Alexandria Bergman gives the commencement address during Columbia College's graduation ceremony on Saturday at Southwell Athletic Complex on Columbia's campus. Columbia offered two ceremonies, one in the morning and one in the afternoon.

Saturday began with gray skies and heavy rain but ended with sunshine, a cool breeze and celebration at Columbia College’s Spring Commencement ceremony.

This year, 423 students from seven different countries graduated from the local college. Bachelor of Arts graduate Alexandria Bergman acted as the commencement speaker.

“Welcome to my Ted Talk,” Bergman joked at the beginning of her speech, which touched on subjects such as the importance of voting and confronting the fear of the unknown.

The college’s spring ceremony began with a tradition — the Ivy Chain Ceremony. The 137 graduates who participated in the ceremony gave three roses to those who had influenced their time at the college and had chains of ivy draped over their shoulders, which were cut to signify one chapter of their lives coming to an end.

Graduate Ashlea Hearn — who graduated with her bachelor’s in communication and a minor in film studies, English and military science — shared the emotions she felt Saturday.

“Even though we had to carry out the (Ivy Chain) ceremony inside, it was still a special and super emotional moment,” Hearn said.

Hearn said the Ivy Chain Ceremony is a time to reflect on the highs and lows of a student’s time at the college, and she remembers one specific moment that stands out during her time at Columbia College.

Hearn was a part of ROTC for four years, and a requirement involved an exercise called “land navigation,” which she said is a training activity where members go into the woods with a map and compass to find certain coordinates during the day and at night.

Hearn completed her training at Fort Leonard Wood in the Ozarks and said when she went to complete the task she got lost in the woods overnight. To her, this was a turning point in her life that she can now laugh at but thinks of consistently when hardship comes her way.

“When I got lost, I tried calling for backup, but no one could find me,” Hearn said. “I sat alone by a tree until 6 a.m. came. This was a learning experience for me because when I look back on that moment I feel like if I can do that, I can do anything.”

In the future, Hearn hopes to begin making her own action or thriller films.

A first for Columbia College

Four years ago, Columbia College opened its doors to the first class of students that had the opportunity to complete a Bachelor of Science in nursing.

On Saturday, Brandi Peasel was a part of the first class of 35 students to graduate with a bachelor’s degree in nursing. She spoke of her time at Columbia College and how she felt this choice ended up being right for her despite the newness of the program.

“When I first got accepted, I was nervous,” Peasel said. “But Columbia College has just been an open arm to me. They’ve become my family.”Peasel was involved in a variety of campus organizations, including one she said holds a special place in her heart: Students for Life, a pro-life club she started her freshman year.

She accepted a job as a nurse at SSM Health St. Joseph Hospital in Lake St. Louis on the medical surgical orthopedic floor.

As students become graduates and turn the page to a new chapter, Columbia College will do the same for one its own.

Professor of criminal justice Michel Lyman will retire from the college after teaching its students for 32 years. Lyman spoke to students Saturday, and his retirement was announced at the ceremony.

“Over the years, the students, in a way, teach you.” Lyman said. “They ask questions and make you think, ‘I haven’t thought about that. Let me get back to you.’ It’s amazing.”

Lyman had the opportunity Saturday to hand a diploma to his daughter, who graduated with a bachelor’s degree in public relations and advertising.

“It’s a special day for the both of us,” Lyman said. “I gave her the choice if she wanted to shake my hand or the president’s hand, and she said, ‘I want you to do it, Dad.’ And I’m just honored.”