The UM System Board of Curators unanimously approved a new $232 million hospital facility for Women’s and Children’s Hospital during its Thursday meeting.

The board also elected new leadership for the coming year and reviewed the system’s new governance structure.

The new facility is a key part of MU Health Care’s three-phase process to consolidate operations on the existing University Hospital campus, maximize efficiency and increase total capacity for the hospitals.

Both MU Health Care and the Women’s and Children’s Hospital currently operate at a higher-than-optimal capacity, according to plans for the project.

The new building is scheduled to begin construction in May 2021 and open in summer 2024. 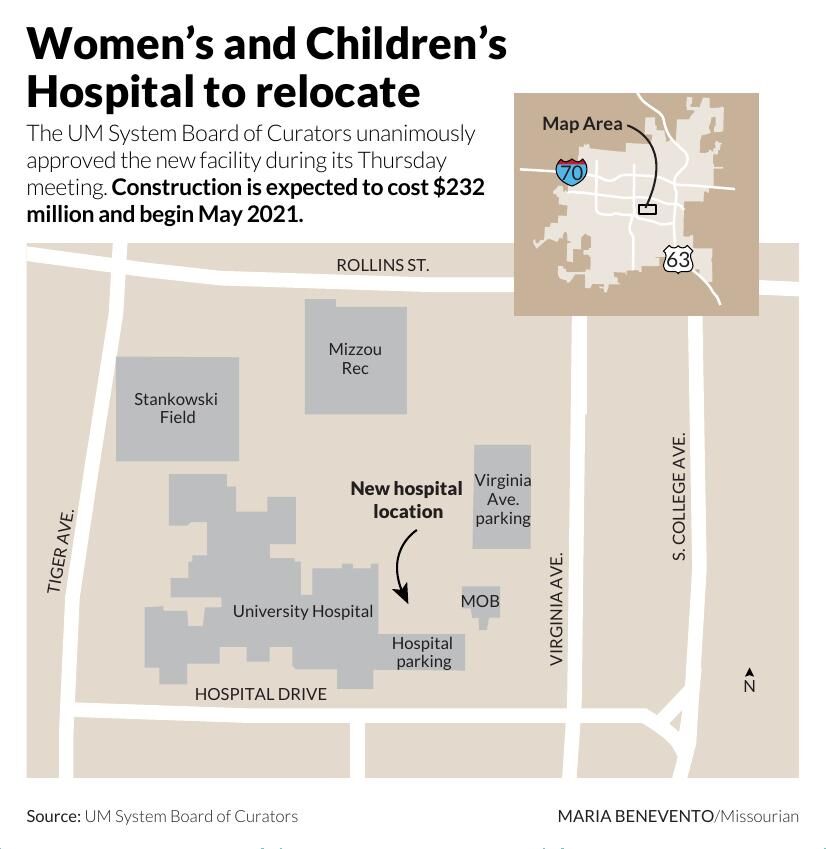 “This is most certainly a milestone for our health system as we embark on one of the largest building projects in our health system’s history to create a centralized hub for inpatient and specialty services that will allow us to continue saving and improving lives for years to come,” they said.

Barohn said previous discussions to integrate Women’s and Children’s Hospital services onto the main campus were accelerated because of COVID-19.

“The decision to move pediatrics and women’s services off the central campus occurred over 20 years ago,” Barohn said. “It may have been the right decision then, but it’s not for 2020 and into the future.”

“I expect that it’ll begin next year, but it’s going to take some time to prepare our facilities on our main campus to accommodate the move,” Choi said. “Our goal is to rapidly make that transition to avoid additional costs that that building will incur.”

Choi said there is no official plan on the future of the current Women’s and Children’s Hospital building but options include using it for “swing-space use,” leasing the facility or selling it.

“We will be providing a recommendation to the board for the board’s decision, sometime next year,” Choi said to reporters after the meeting.

The board also heard from University of Missouri-Kansas City Chancellor C. Mauli Agrawal regarding the NextGen Data Science and Analytics Innovation Center, which will focus on high-performance computing in a variety of problem-solving applications to benefit NextGen Precision Health.

The data center, a collaboration between UMKC and MU, received a $2 million donation from former UM System President Gary Forsee on Thursday.

Darryl Chatman was elected as the next chair of the board Thursday, and Greg Hoberock was elected vice chair.

Outgoing board Chair Julia Brncic also commended Curators Maurice Graham and Phillip Snowden, whose terms end Jan. 1, for their six years of service on the board.

Graham nominated Chatman for chair, citing his preparedness, dedication and willingness to ask tough questions without being accusatory.

He told the story of “Chopper” Chatman’s accomplished career as an MU linebacker who eventually received three master’s degrees and a juris doctorate, all but one of which were earned at MU.

Curator Robin Wenneker nominated Greg Hoberock for the position of vice chair, citing his willingness to challenge the status quo, work ethic and his matter-of-fact approach.

Both Chatman and Hoberock were elected unanimously for the 2021 term.

Curators reviewed a report submitted by the Council of Chancellors, a group formed after the board voted in July to approve a new governance structure that merged the positions of UM System President and MU Chancellor.

The report formally defined the roles of president, chancellors, UM administration, Campus Advisory Committee and the Council of Chancellors.

The Campus Advisory Committee comprises eight members, two appointed by each of the system’s four chancellors.

Those members must be external voices of the campuses, including alumni or community leaders, according to a Thursday news release.

The committee will establish its own meeting schedule and regularly provide external perspectives.

“These recommendations will ensure each university has a voice on system-related issues and that our institutions will work together for the benefit of our students and our state,” Brncic said in a Thursday news release. “I commend the council’s thorough work and commitment to creating a framework that will make the University of Missouri a national model for higher education governance.”

Choi will chair the Council of Chancellors, which will meet monthly, according to previous Missourian reporting.

“The recommendations put forth today by the Council of Chancellors will increase the collaboration among our four universities on key priorities, while also respecting and preserving the distinct strengths of each institution,” Choi said in the news release. “The oversight provided by the council and Campus Advisory Committee will help mitigate concerns of conflicts of interest and ensure university-specific voices are heard.”

The board unanimously approved all items on its consent agenda, including renaming schools and departments to honor philanthropists and the restoration of a portion of the UM Collected Rules and Regulations pertaining to academic dishonesty.

Following his election at a Board of Curators meeting Thursday, Chatman reflected on what inspired him to reach the position.