In early January, 117 Republican legislators wrote letters to the curators asking for Click's termination. An earlier version of this article misstated the number.

COLUMBIA — Melissa Click has been fired after the UM System Board of Curators voted 4-2 to terminate her employment.

"The board believes that Dr. Click’s conduct was not compatible with university policies and did not meet expectations for a university faculty member," Henrickson noted in the statement. She said Click's behavior demanded "serious action."

Henrickson said Click "has the right to ask the board for reconsideration."

"It would be her process, and she could submit anything she would like to convince the board to change its mind," Henrickson said.

Since November, Click, an MU assistant professor of communication, has become a crucible for debates about academic due process, First Amendment rights and protests against racism at MU.

She drew the ire of more than 100 state lawmakers and others who thought her actions disgraced MU. As a result of a Nov. 9 confrontation with MU student and independent journalist Mark Schierbecker near the Concerned Student 1950 camp on the Mel Carnahan Quadrangle, Click was charged with third-degree assault.

The Board of Curators suspended her from teaching on Jan. 27 pending an investigation conducted by the St. Louis law firm Bryan Cave. Investigators reviewed paperwork and video, and more than 20 people, including Click, were interviewed as part of their investigation.

The report made it clear that the law firm's job was to collect facts and testimony; it was not asked to offer opinions or make recommendations.

Click was given the report Feb. 12 and said in her response one week later that her actions needed to be understood within the campus climate at the time.

She wrote that the report "omits a number of crucial descriptions and events that give context to my actions" at the parade and on the quadrangle. She said she believed the board needed "a fuller picture of the environment in which I found myself." 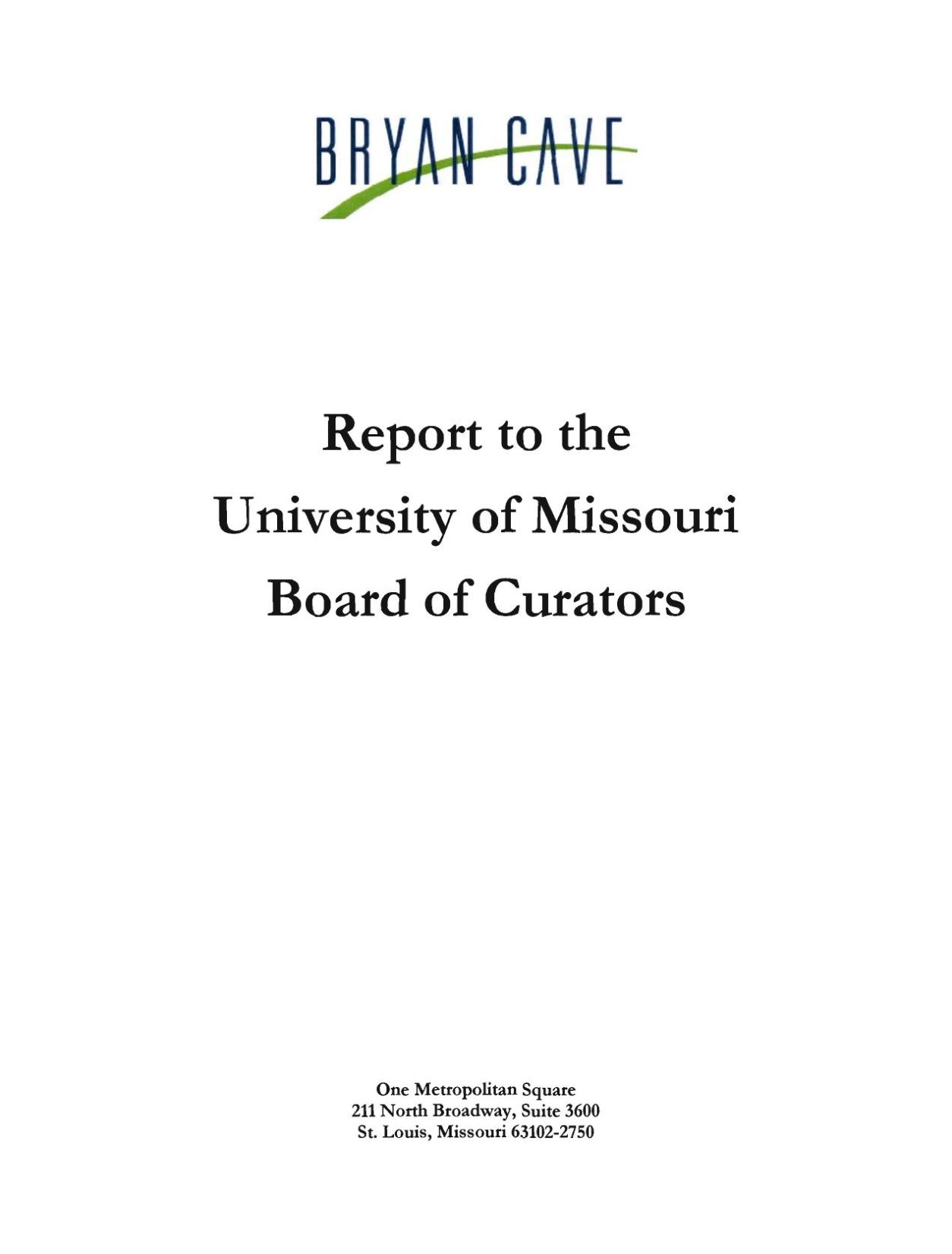 The decision to fire Click comes after the curators faced pressure from inside and outside the state to make a decision.

In early January, 117 Republican legislators wrote letters to the curators asking for Click's termination, and the House Budget Committee pushed a proposal to slash the UM System budget.

Meanwhile, incensed MU faculty insisted that the board must follow due process. They cited the process outlined in UM Collected Rules and Regulations as the appropriate venue for adjudicating charges of faculty misconduct.

In a conference call following the firing's announcement, Henrickson said Click's termination was meant to prevent her conduct from going unaddressed.

She said the demands by the legislators had not factored into the decision, and the curators did not consider filing a faculty irresponsibility charge under the Collected Rules and Regulations.

"We were hoping that a member of the faculty would file such a charge," Henrickson said.

A state legislator filed a complaint last week, but because he was not affiliated with the university, he didn't have standing to do so.

Among the other curators, neither Steelman nor Cupps could be reached for comment. Graham and Snowden declined to comment beyond referring to Henrickson's statement.

"The process the Board of Curators used to reach a determination about Dr. Click’s employment at the university is not typical — but these have been extraordinary times in our university’s history, and I am in complete agreement with the board that the termination of Dr. Click is in the best interest of our university," Foley said.

In the conference call, UM System Interim President Mike Middleton said he agreed with the decision. Middleton characterized Bryan Cave's investigation as "exhaustive," and he said Click's "behavior was inappropriate and unacceptable."

"The board had every opportunity to use our existing processes and chose not to," Trachtenberg said. "Regardless of what one thinks about Melissa Click or her behavior, she was entitled to a fair process, not one created on the fly, containing at least one judge (Steelman) who had written in the Washington Post how the case should come out."

Angela Speck, a Faculty Council member and professor of astrophysics, said, "I think it's ridiculous that she should be fired without due process."

At the MU Faculty Council meeting Thursday after Click was fired, Foley stood by the Board of Curators' decision. He said did not feel that his authority had been undermined by the decision.

After the meeting, the Faculty Council released a statement noting that Click was never afforded a fair hearing and that the curators could have filed a faculty irresponsibility complaint against Click instead of hiring a law firm to investigate.

"By flouting the Collected Rules and Regulations of the University, the Board of Curators has caused needless injury to the University of Missouri," the council wrote in its statement.

Mitchell McKinney, who chairs the Department of Communication, declined to comment Thursday afternoon.

Lacy Rushin, of the Austin, Texas, firm Status Labs that has been helping Click rehabilitate her image, said Thursday afternoon that Click would have no comment at this time.

"We are not Melissa's legal counsel, but we will continue to help as needed," Rushin said in an email.

Schierbecker said he "felt like the investigation was thorough enough and brought enough information to the table that the Board of Curators probably made a confident decision."

"Click obviously has some issues to work through," Schierbecker said. "What happens between me and her wasn't all that happened that day. What you saw on the video was pretty much what other people saw in their interactions with her that day, and I would speculate that that had something to do with what happened."

The Bryan Cave report includes comments from a Feb. 2 interview with Click about her call for "some muscle." She told an investigator she thought "it was common practice in the camp that when something got heated, large men would come in to defuse the situation." She characterized this as "protocol" for dealing with confrontations.

Tim Tai, a Missourian photographer who was photographing the Nov. 9 protests for ESPN while Click was present, said Thursday he was "hopeful we're finally done talking about Click and can start focusing outrage on why black students are harassed and why they feel isolated on campus and underrepresented in faculty demographics."

One common claim against Click was that she had infringed upon Tai and Schierbecker's freedoms of speech, press and assembly. First Amendment issues galvanized those who saw Click's actions as an assault on one of the country's fundamental rights.

Brian Brooks, the former associate dean in the Missouri School of Journalism, filed a Title IX report against Click after the Nov. 9 incident.

In a letter to the editor published in the Missourian on Feb. 19, Brooks said her actions were "outrageous" and "hurt the cause of the very students she sought to support."

Brooks said Thursday he thought it was about time that Click was fired.

"Her actions in both circumstances were deplorable," Brooks said.

On Feb. 18, members of the MU chapter of Young Americans for Liberty collected signatures calling for Click's firing. The group organized to promote free speech, the right to assembly and other First Amendment rights.

Thomas Bradbury, the president of the MU chapter, said that while the decision to fire Click wouldn't "completely remedy the current negative perception associated with the University of Missouri," it was "a step on the correct path."

The curators, Bradbury said, "are showing that students' (First Amendment) rights are more important than a professor attempting to make a political statement."

Melissa Click's response to UM Board of Curators

Melissa Click's response to the UM Board of Curators

Statement from Pam Henrickson, chair of the University of Missouri Board of Curators

Statement from Pam Henrickson, chair of the University of Missouri Board of Curators. She voted against ending Melissa Click's termination.

Here’s a chronological look at the key moments and coverage since November that have led to Click's dismissal:

Nov. 9: Click is captured on camera asking for "some muscle" to stop a freelance photographer from documenting the Concerned Student 1950 camp on Mel Carnahan Quadrangle.

Nov. 10: Click releases a statement apologizing for her actions and resigns from her courtesy appointment with the Missouri School of Journalism.

Nov. 11: The student who videotaped Click on Mel Carnahan Quadrangle files a "municipal simple assault" complaint against Click with the MU Police Department.

Nov. 13: A Change.org petition is created asking for the removal of Click and another MU faculty member.

Nov. 14: Context of protest video questioned amid fallout at MU.

Nov. 30: City Prosecutor Steve Richey reviews the MU Police Department report to decide whether or not Click should be prosecuted for assault.

Jan. 26: Click pleads not guilty to misdemeanor charges of assault through an attorney.

Jan. 27: Click is suspended pending an investigation by the UM System Board of Curators.

Jan. 28: Concerned Student 1950 sends out a letter through Twitter accusing MU and the UM curators of scapegoating Melissa Click.

Feb. 14: After body camera footage of Click at the Homecoming Parade is published, MU Interim Chancellor Hank Foley says he will confer with the Board of Curators about the latest development.

The questions and concerns addressed revolved around the decision by the UM Board of Curators to fire Melissa Click.