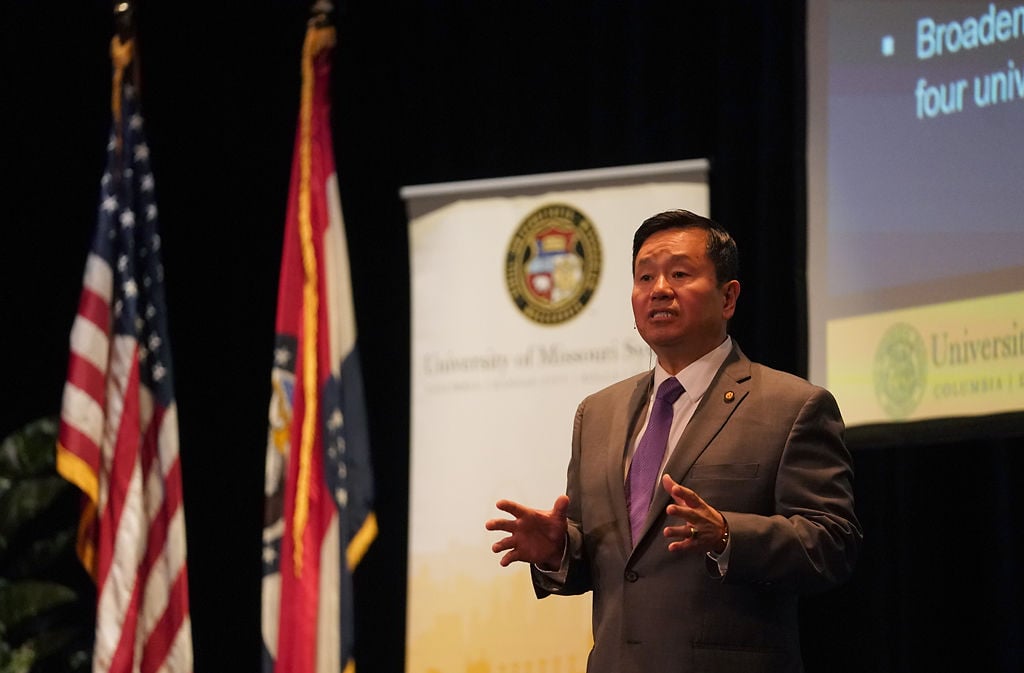 UM System President Mun Choi gives his speech “Excellence Through Innovation: A New University of Missouri System” at the Missouri Theatre on Sept. 14, 2018, in Columbia. Choi will serve as the interim MU chancellor after Alexander Cartwright was confirmed as the president of UCF. 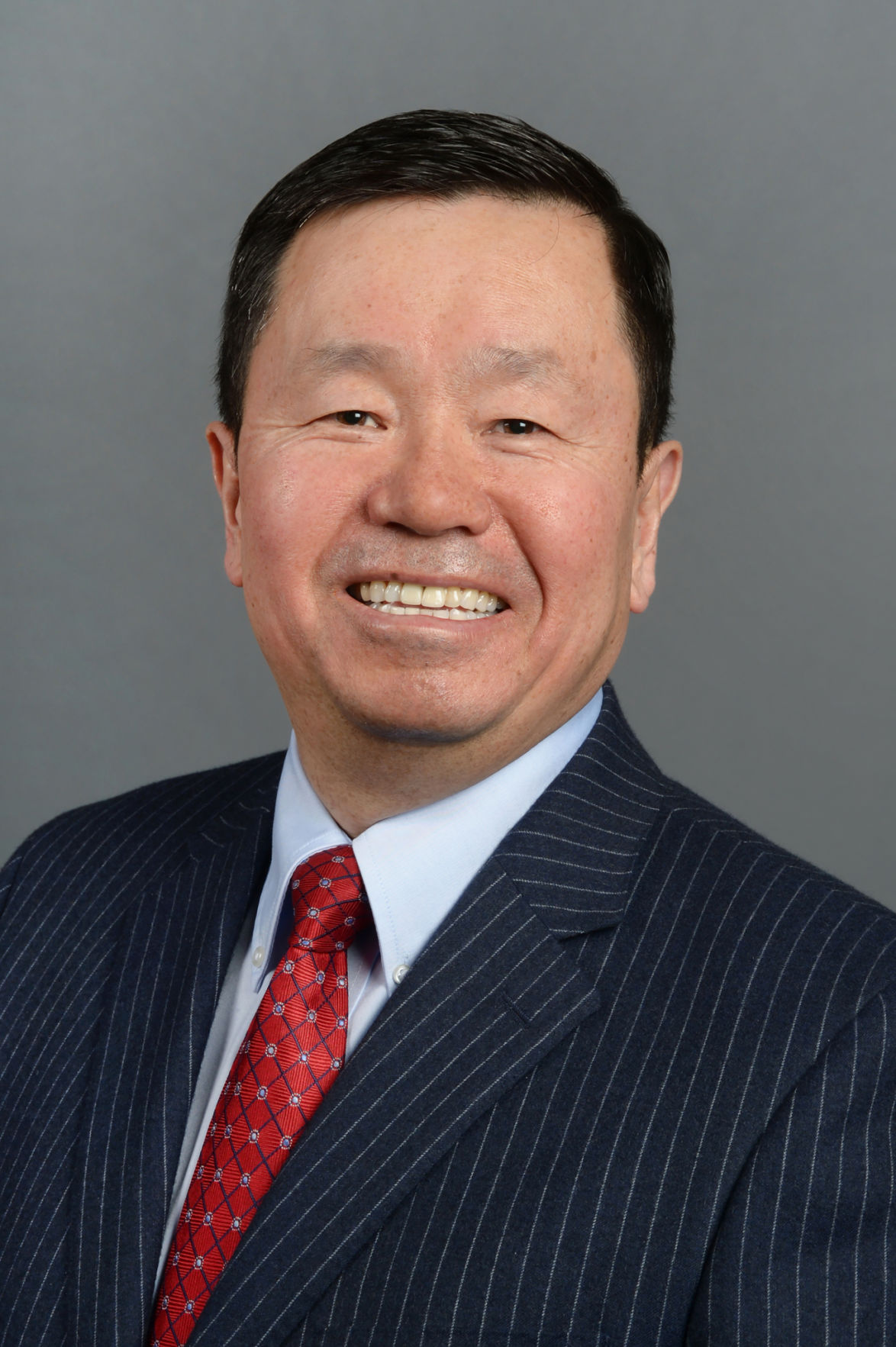 Mun Choi, president of the University of Missouri System, will assume the MU chancellor’s role on an interim basis, the system announced Thursday in a campus email.

Chancellor Alexander Cartwright is leaving to become president of the University of Central Florida and will start there April 13. He resigned effective Wednesday. Choi’s appointment takes effect immediately.

“At this time, the board is not supporting a search for a new chancellor and plans to evaluate and discuss the organizational structure of the university in the coming months,” according to a later system news release.

“During this time of unprecedented challenges, it is important that our continuity of proven leadership is enabled for swift and efficient actions that benefit our students, faculty, staff and communities,” Julia Brncic, chair of the UM System Board of Curators, said in the news release.

The announcement comes more than a week after the curators’ Executive Committee granted Choi temporary overarching authority in the system’s response to COVID-19.

Choi will continue his duties as system president. A vote by the full board to put Choi in the dual role was unanimous at a meeting lateWednesday afternoon.

In a late-afternoon interview, Choi said his new position will allow him to align the mission of the university and remove redundancies between the system and MU.

“We recognize that we have to become much more efficient,” Choi said. “To do that, we’re not just cutting costs. We have to transform the way that we do our business and to be able to make that decision collectively with the system and the campus is the right approach.”

”I know that I’m going to rely on many of the top leaders for me to delegate some of my current responsibilities at both the system and at Mizzou by focusing on the strategic priorities that we need to have from top executives at the campus and at the system,” he said. “The board will share with me how I’m doing in that regard, and I’m sure they’ll get input from the stakeholders in the universities as well.”

Clark Peters, the MU Faculty Council chair and a member of the UM System Intercampus Faculty Cabinet, said he has found Choi to be an “open and candid” leader.

“From the beginning, President Choi has had a very active role in helping guide policies at the system level, which is his role,” Peters said. “He is a very hands-on kind of manager. … He brings a very energetic and thoughtful perspective to the table.”

Peters said some may be happy with this change while others may have reservations about the division of power between the UM System and MU.

“There will be a lot of concern from some faculty and staff members about the blurring of the line between the system and the University of Missouri,” Peters said. “It’s a delicate balance.”

Choi acknowledged it may be a challenge to operate as the chancellor while also looking after the three other campuses.

“The negatives can be managed, and we have to work hard at it to manage it, but I do believe that it can be a structure and an approach that will work for the university.”

Peters said there may be concern that MU will get “special treatment” among the four campuses, in Columbia, St. Louis, Rolla and Kansas City. However, he said Choi works to mitigate these concerns.

Prior to joining the UM System, Choi served as provost, executive vice president and dean of engineering at the University of Connecticut. Choi was hired in late 2016 as president and started in the role in early 2017. The previous president, Tim Wolfe, resigned in November 2015 in a season of campus protests largely around the university’s handling of race issues. Michael Middleton served as interim president.

Choi’s big push will continue to be creation of the NextGen Precision Health Initiative. It aims to bring the UM System’s universities together to advance precision medicine, or individualized medical treatment based on a patient’s genetic makeup and other personalized factors.

Construction on the $220.8 million facility is underway on the MU campus. How it will be fully funded is unclear; some state money has been secured, and private funding is being aggressively sought.

Peters said he doesn’t anticipate Choi will make drastic changes to the shared governance mechanisms in place at MU. Shared governance is shared responsibility among different stakeholders in the institution, such as faculty and administrators, for how the university is run. It is recognized in the system’s Collected Rules and Regulations.

“My expectations for a Choi administration will be that it will be very much the same, in part because he’s modeled that through his work at the system level with the IFC,” Peters said.

“For me,” Peters said, “shared governance means he welcomes dissent and doesn’t let it paralyze him.”

Kendrick, whose district includes MU, is the ranking Democrat on the House Budget Committee; he serves on the Education Appropriations Subcommittee and the Higher Education Committee.

“President Choi has shown great leadership of the University of Missouri System,” Kendrick said. “Since he took on that role, the UM System is stronger and appears to be more collaborative with all campuses than it has been at least in recent memory. Having President Choi as Chancellor will continue moving not only Mizzou but the UM System in the right direction.”

Kendrick said the move is important for the university to respond to COVID-19.

“There are so many uncertainties right now facing higher education, facing the state of Missouri’s budget, not only for FY20 but also for Fiscal Year ‘21,” Kendrick said. “Obviously, we’re experiencing a public health crisis in this country, so it does not concern me that there are not plans to move forward with a search at this point.”

Peters said he thinks Choi will remain in the dual position for a while and the restructuring of system leadership may be considered for the long term. Combining the system with the university is a concept that has come up in the past, though faculty opinions vary widely, he said.

“My guess is given the nature of this virus and the academic leadership change, that it will be some time,” Peters said. “I think we’ll have the possibility for actually getting a hard look at whether this is something we should consider.”

“I think that history has shown that these two roles may not be the ideal organizational structure,” Brncic said. “So that’s why we are going to take the time now to look at it.”

She said the board will continue to evaluate whether the combination will work in the long term or if the role needs to be separated again.

“I think that we need to do a little bit of additional research and look at how it has operated well in other similar systems such as ours,” Brncic said.

It's official: Cartwright approved as next UCF president, starts April 13

After a vote Wednesday, Alexander Cartwright will leave MU to lead the University of Central Florida. He starts April 13.