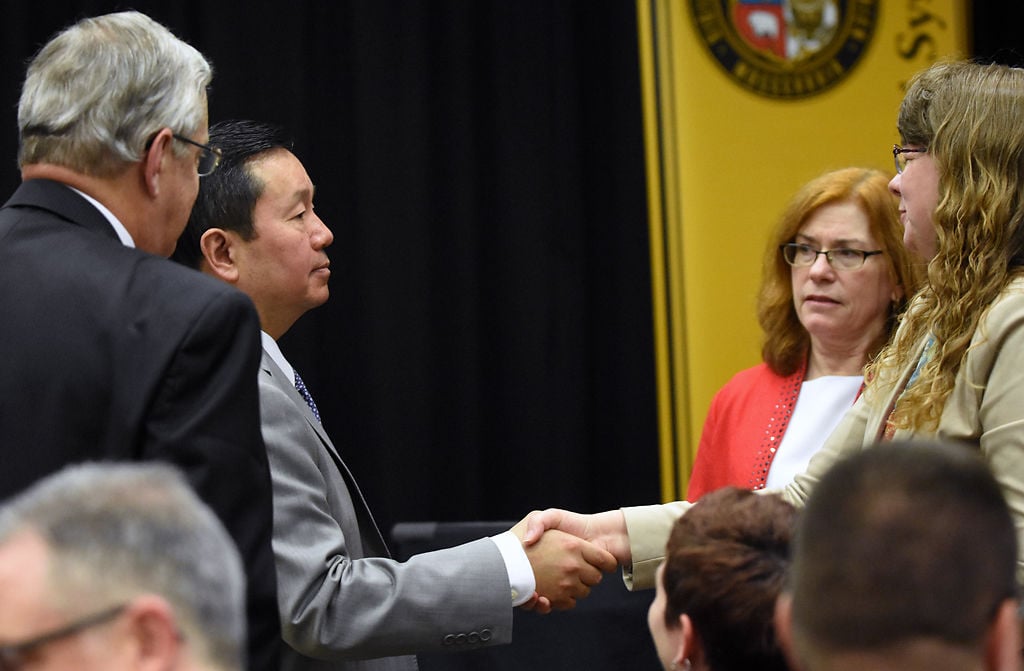 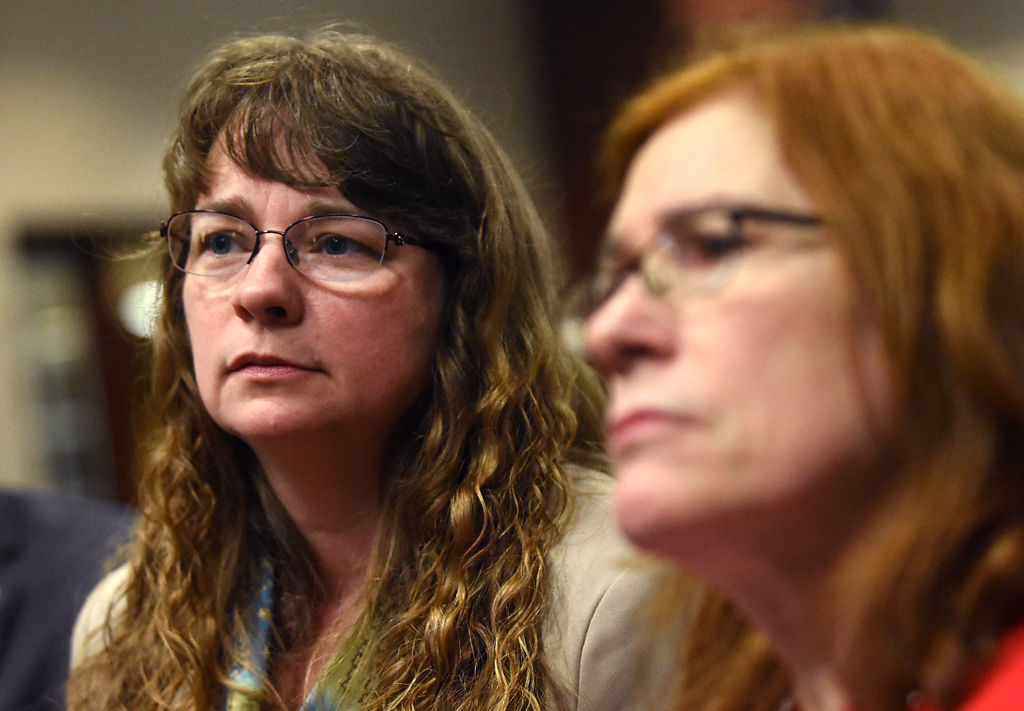 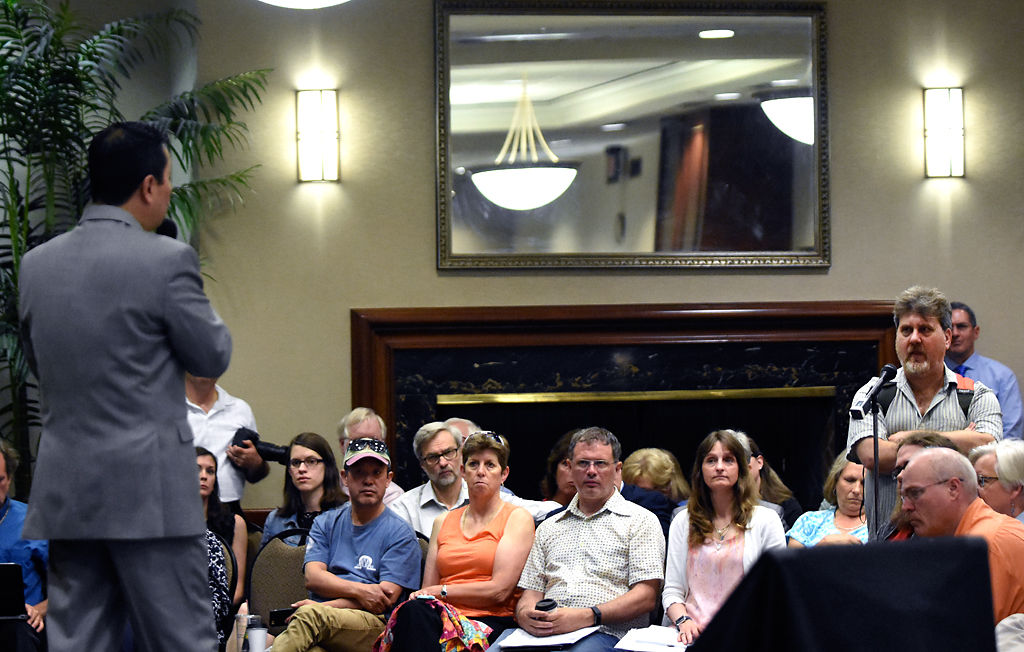 Jeff Rouder, a professor in the MU Department of Psychological Sciences, asks UM President Mun Choi if faculty were consulted in creating the strategic priorities listed in the address on Friday in Stotler Lounge. Faculty across the MU community addressed the need for their input in budget decisions. 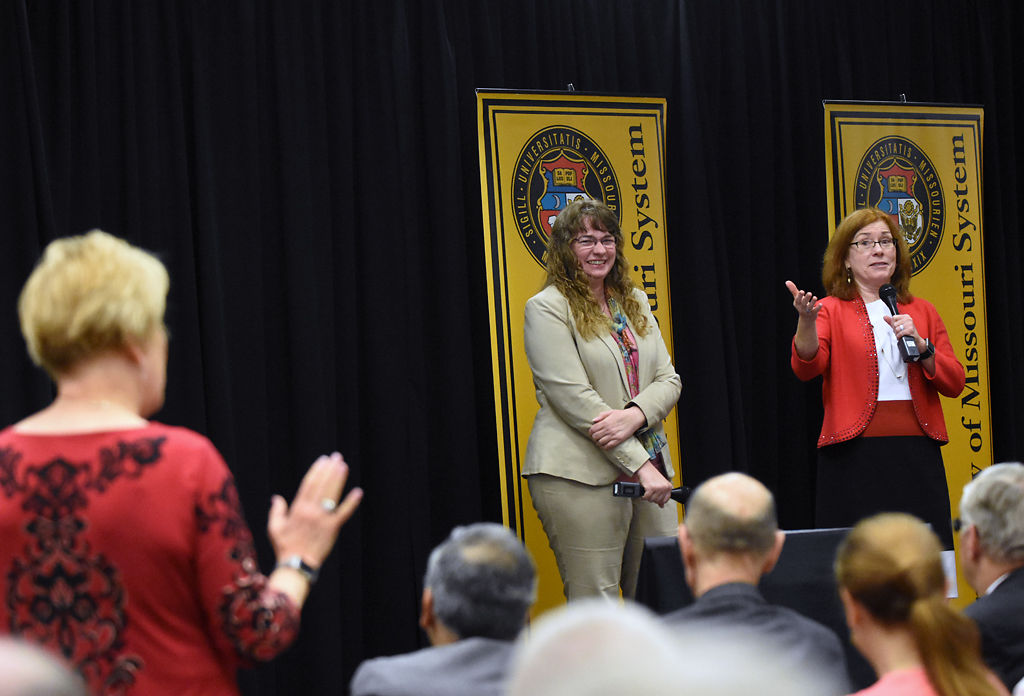 Marilyn Rantz, left, a nursing professor, comments on how different academic programs vary in costs, specifically Missouri nursing schools, during a budget presentation on in Stotler Lounge. Interim Chancellor Garnett Stokes responded: "We have an issue with the level of our tuition and the varying costs. There is no getting around the fact that some areas are more costly, and it's a function of what they are." 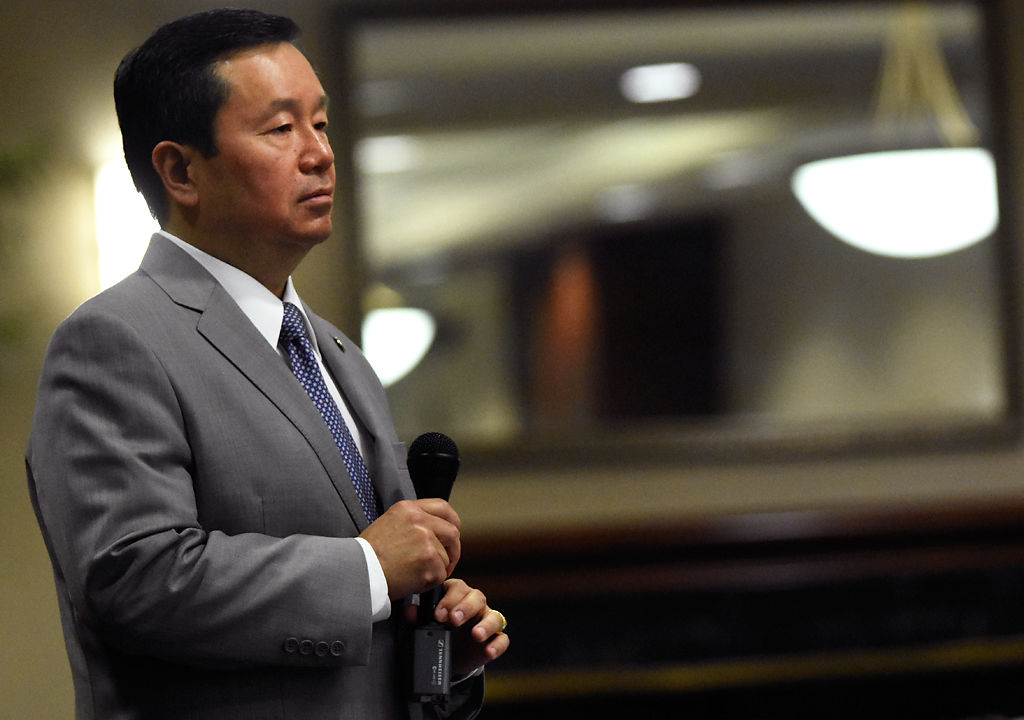 UM President Mun Choi listens to a question from the audience during a budget presentation on Friday in Stotler Lounge. Choi focused largely on system budget strategies but also summarized reductions and changes the four individual campuses would adopt.

Jeff Rouder, a professor in the MU Department of Psychological Sciences, asks UM President Mun Choi if faculty were consulted in creating the strategic priorities listed in the address on Friday in Stotler Lounge. Faculty across the MU community addressed the need for their input in budget decisions.

Marilyn Rantz, left, a nursing professor, comments on how different academic programs vary in costs, specifically Missouri nursing schools, during a budget presentation on in Stotler Lounge. Interim Chancellor Garnett Stokes responded: "We have an issue with the level of our tuition and the varying costs. There is no getting around the fact that some areas are more costly, and it's a function of what they are."

UM President Mun Choi listens to a question from the audience during a budget presentation on Friday in Stotler Lounge. Choi focused largely on system budget strategies but also summarized reductions and changes the four individual campuses would adopt.

This story was updated throughout at 5:20 p.m. with additional details and comments.

COLUMBIA — MU will eliminate the equivalent of 429 jobs as part of its effort to deal with budget cuts made necessary by a downturn in enrollment and the lagging tuition revenue that comes with it, alongside reduced state appropriations for fiscal 2018.

That was among the headlines when UM System President Mun Choi outlined budget strategies and cuts during a public presentation to a packed house in Stotler Lounge at MU's Memorial Union on Friday. His address focused largely on system budget strategies but also summarized reductions and changes the four individual campuses would adopt.

Here is the MU budget plan for fiscal 2018 that was unveiled by UM System President Mun Choi on Friday afternoon.

Of the jobs being cut at MU, 343 full-time equivalent positions would be eliminated from the general campus operating budget, along with 86 in the auxiliary units of Student Affairs and Athletics, according to a an MU budget plan submitted to Choi and Interim Vice President for Finance Ryan Rapp by MU Interim Chancellor Garnett Stokes on Wednesday.

The general campus jobs being lost include the equivalent of 135 full-time faculty, 173 full-time staff and 35 graduate positions. Of the faculty and staff jobs, 42 are "high-ranking administrative positions," Garnett wrote in her budget message.

Choi also spoke of the need for the four campuses in the UM system to be distinct without duplicating their offerings.

"Where is the duplication?" he asked rhetorically. "We’re going to look at where we can consolidate, where we can add local satellite offices. If it doesn’t support academic, research and extension then we’re going to have to ask ourselves, is it as critical as we think it is?”

Choi alluded to the continuing impact of the events of fall 2015, noting that he wasn't with the UM System at the time. But he wondered aloud whether "things could have been done differently."

The campus protests over incidents of racism at MU and frustration with the way a decision to cut graduate student health insurance was handled — though never implemented — is frequently cited for the downturn in first-time college enrollment, estimated at 15 percent for this fall compared to last fall. That's an estimated 4,000 fewer students on campus.

Stokes, who also spoke after Choi on Friday, wrote in her budget plan that there are several areas where MU will continue to invest, including aggressive student recruitment, efforts to hire more diverse faculty, increasing stipends and improving health coverage for graduate students, and bolstering support for research institutes and for strategic faculty research hires.

Even as it cuts positions, MU continues to recruit for 161 faculty positions that Stokes said would be "instrumental" to campus success. Of those, 58 are expected to do research in strategic areas targeted by Mizzou Advantage. That includes:

At the system level

Choi outlined $8.3 million in cost savings and reallocations for the UM System. He laid off Vice President for Academic Affairs, Research and Economic Development Robert Schwartz and Vice President for University Relations Steve Knorr. He closed the Federal Government Relations Office and restructured the State Government Relations Office and the Office of University Relations. Those moves alone will save $1.96 million.

Wally Pfeffer, who worked with the government relations team for 22 years, asked Choi how the system will conduct the necessary task of negotiating and working with the state.

"Over the next two to three weeks, I will be meeting with key legislative leaders as well as the governor’s office to identify a path forward," Choi said.

After his presentation, Choi told the Missourian that the move "gives us some time to re-envision what that structure looks like." Once a new vision is found, Choi said he probably will hire new people.

Here is the UM System budget plan for fiscal 2018 that President Mun Choi outlined for the public Friday afternoon.

The system will save another $2.3 million by reallocating UM Research Board Investment toward strategic research priorities and save $1.05 million by eliminating nearly 13 full-time equivalent staff and administrator positions in Information Technology.

Choi sought to strike a tone between pragmatic realism and optimism about the UM System's future, emphasizing that the four campuses needed to operate more efficiently as a "system."

Faculty, alumni and others who gathered for Choi's presentation were worried about the impact the cuts would have on various parts of the university, including extension. But Choi reiterated his support for extension. He also expressed admiration for the contributions of non-tenure-track faculty in research, extension and teaching, noting that some NTT faculty have been with the university for "20 to 30 years."

Choi said that in examining the budget, administrators made sure to minimize the impact on undergraduate and graduate students.

“I don’t know the total impact on student employees, but I went through line by line with our budget team as well as the campuses," Choi said. "Wherever we saw indication that it affected undergraduate students, we asked the campuses to revisit that and find other sources to support those programs.”

“I am very pleased that this institution has made it a priority to increase the graduate student stipend,” Stokes said.

Regarding graduate student tuition waivers, Stokes said she didn't “know where it’s going to land” and emphasized the importance of having a process in place to review them.

Mannie Liscum, associate dean for the College of Arts and Science and a professor of biological sciences, urged the administration not to play games.

“Please, please, everyone needs to take a lot of thought on how this is done,” he told Stokes. “And let’s not get caught up into a shell game where we increase student stipends and think it’s OK now to cut tuition (waivers)."

“We want to be supportive of graduate education,” Stokes said, “and we need to create the right system that allows us to best do that financially.”

Stokes added her assurance that graduate students would be involved in “the course of figuring out what’s going to be our strategy.”

Stokes said she could not yet identify the specific MU institutions or buildings that would close.

“That academic program review process, that’ll probably be one of the longest term processes we have,” Stokes said. “I expect that that's going to be going on through this next academic year, and I’m not sure where it will land, but that process will involve faculty, and we’ll have input from our students and our alumni.”

Stokes said the cost of individual programs won't be the single determining factor in what will be cut.

“On any campus, a College of Arts and Science is inevitably going to be one of those places where they’re serving a lot students and teaching lot of students," she said as an example, "and their general operating investment is usually not as great as what they’re producing.”

Vice Chancellor for Finance Rhonda Gibler said the academic review process also considers different ways that programs can be delivered or taught in order to save money.

Anatole Mori, associate professor in the Department of Classical Studies, worried about the status of humanities courses amid these cuts. Stokes emphasized the contribution of humanities to MU's values.

“We would lose if part of how we think about educating students becomes a decision that the thinking, the critical thinking, that is developed in humanities studies is somehow unimportant,” Stokes said.

Sean Brown, assistant manager for hospitality services at Campus Dining, asked Stokes when people affected by the cuts will be notified. She said that information will come early next week in many cases.

The MU personnel reductions are a combination of contract non-renewals, which she said have mostly already happened, staff layoffs, which are coming in the next few days, and positions that are being eliminated after people leave through other means on a rolling basis.

Also coming out next week is a breakdown of the budgets from each of the specific campus units. Those will be posted Wednesday at the Office of the Chancellor's website. Stokes also is working to coordinate meetings with each group to go over their budget in smaller forums over the next few weeks. 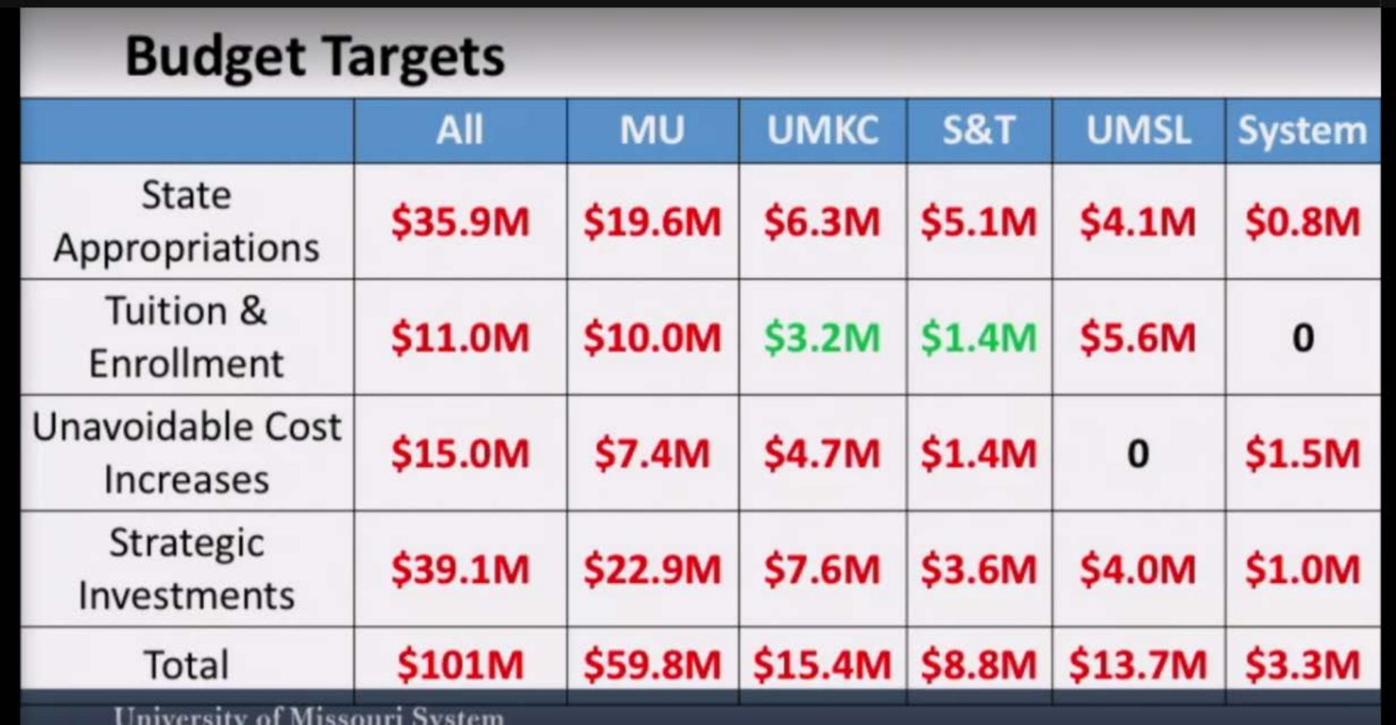 Many universities, particularly in the Midwest and Northeast, have declining enrollments and high school graduate pools. MU is trying to change the state's perception of the university and attract more students.