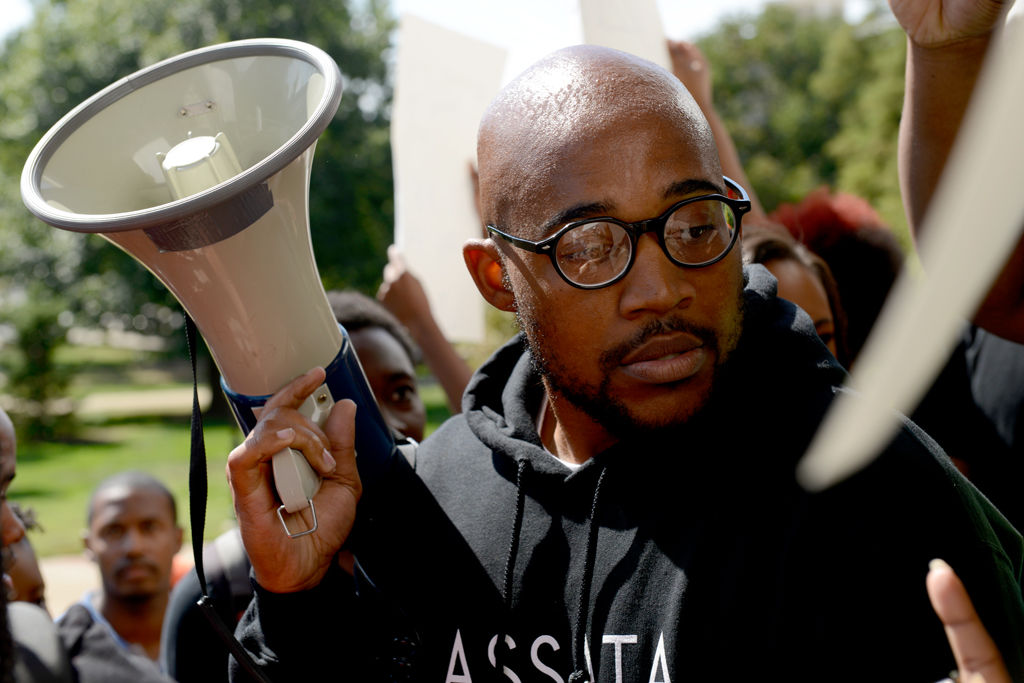 Jonathan Butler talks with people at a Racism Lives Here protest at MU on Sept. 24. In a personal letter to the MU Curators on Monday, Butler announced he will go on a hunger strike until Tim Wolfe is no longer the UM System president. 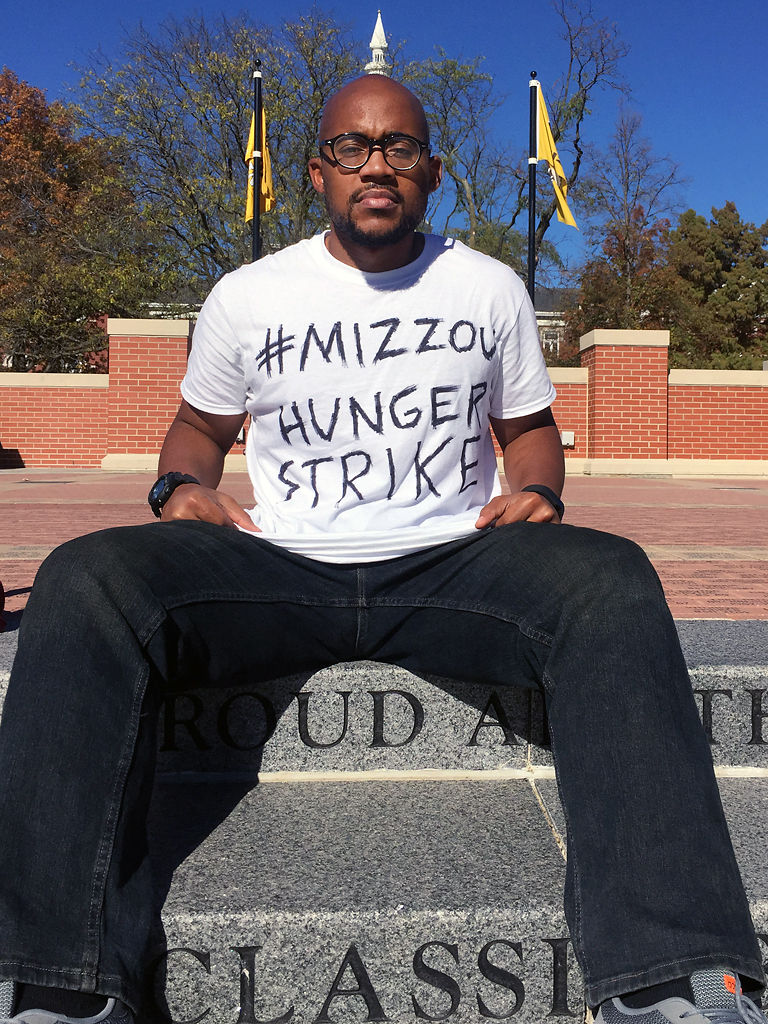 Jonathan Butler announced a hunger strike Monday morning. He said he is demanding Tim Wolfe's removal as president of the University of Missouri System because Wolfe has failed to respond to marginalized students' concerns with sincerity or concrete action.

This story has been updated to include statements from UM System President Tim Wolfe and MU spokesman Christian Basi.

Additionally, background information on hunger strikes has been added.

COLUMBIA — Jonathan Butler, an MU graduate student and campus activist, began a hunger strike at 9 a.m. Monday as a protest against Tim Wolfe remaining president of the University of Missouri System.

"During this hunger strike, I will not consume any food or nutritional sustenance at the expense of my health until either Tim Wolfe is removed from office or my internal organs fail and my life is lost," Butler wrote in a letter sent to the UM System Board of Curators.

Butler, a master's student in educational leadership and policy analysis, is protesting "a slew of racist, sexist, homophobic, etc., incidents that have dynamically disrupted the learning experience" at MU. His letter referenced incidents of black students being called racist slurs, the sudden removal of graduate student health insurance subsidies in August, MU's cancellation of Planned Parenthood contracts and the swastika drawn with human feces found in an MU residence hall on Oct. 24.

"(S)tudents are not able to achieve their full academic potential because of the inequalities and obstacles they face," Butler wrote. "In each of these scenarios, Mr. Wolfe had ample opportunity to create policies and reform that could shift the culture of Mizzou in a positive direction but in each scenario he failed to do so."

The letter was sent to curators at 8:29 a.m. Monday. The curators, who are the governing body of the four-campus system, have the power to fire Wolfe. Butler also published the letter on Twitter shortly after 10 a.m.

Curators Phillip Snowden and David Steelman had no comment. The other six curators did not respond to phone calls requesting comment as of 7:30 p.m. Monday.

“It is extremely concerning when any of our students puts their health and safety in harm’s way. I sincerely hope that Mr. Butler will consider a different method of advocating for this cause. I respect his right to protest and admire the courage it takes to speak up.

“I believe that the best course of action is an ongoing dialogue about the racial climate on our four UM System campuses. Immediately after my initial meeting with the ConcernedStudent1950 group on October 26th, I invited Jonathan to meet again so we can build a deeper relationship and open a frank conversation about the group’s frustrations and experiences. I remain hopeful that they will accept my invitation.

“This meeting with the ConcernedStudent1950 group is one example of our engagement at the UM System level on this complex, societal issue. I have met with our chancellors, campus diversity officers, students and faculty about the scope of the problem, so that collectively we may address these issues that are pervasive and systemic in our society. We must always continue our efforts to affect change at our UM System campuses.”

Butler is part of Concerned Student 1950, the student group that stopped Wolfe's car during the Homecoming Parade on Oct. 10. After Wolfe did not respond to students' concerns while he was in the car, the group published a list of demands, including asking for a handwritten apology from Wolfe and his removal from office.

Wolfe met privately with members of Concerned Student 1950 on Oct. 26, but he did not agree to any of the group's demands. Butler confirmed that he did receive an email from Wolfe the next day, but because he asked Wolfe that all correspondence go through the Concerned Student 1950 group email address, he was waiting for Wolfe to email the group before he would respond.

Butler said he is demanding Wolfe's removal from office because he's failed to respond to marginalized students' concerns with sincerity or concrete action.

“I’m critical of Chancellor Loftin because he does play a crucial role in what happens on campus, but in the meetings I’ve seen with him, he’s actually more willing to understand how systems of oppression, how racism and all these things work,” Butler said in an interview. “Being in a meeting with Tim Wolfe … he doesn't acknowledge our humanity, he doesn't acknowledge that we exist; we're nothing to him.”

In his letter, Butler wrote that he has “no ill will or thoughts of harm towards Mr. Wolfe.” Instead, he thinks it's urgent to make MU “a more safe, welcoming and inclusive environment for all identities and backgrounds.”

“Chancellor Loftin continues to be willing to meet with representatives from student groups, including ConcernedStudent1950. Additionally, Chancellor Loftin and his staff will continue to meet with student leaders, faculty and staff, as we take steps to acknowledge our past, create a more inclusive campus and build a better future at Mizzou.

“Chancellor Loftin and his administrative staff are concerned about the health and well-being of Mr. Butler, as we are with all of our students. We respect Mr. Butler’s right to protest in this manner, but sincerely hope he will not suffer from his actions. We offer many resources to support students’ health and wellbeing, all of which are available to Mr. Butler.

“Chancellor Loftin and all of his staff sincerely want to work with Mr. Butler toward a better understanding of our differences and hope he will reconsider his actions, which could have damaging repercussions to his health. We stand ready to continue an open dialogue.”

During his hunger strike, Butler will continue to attend class and work at his job as a co-facilitator for a Peace Corps prep program. He will also host study halls about systems of oppression such as racism and sexism on MU's central campus beginning Tuesday, but the final details of those study halls have not yet been announced.

Butler has been a vocal student protester, condemning racism at MU since last year’s post-Ferguson demonstrations. Butler is also a member of the MU Faculty Council’s race relations committee, which has the “purpose of addressing widespread unawareness of racial insensitivity on campus,” according to a Faculty Council report from March.

Butler made the decision to go on a hunger strike a couple of days after the Homecoming Parade.

"A hunger strike specifically speaks to the nature of the beast that we're dealing with when we talk about systemic issues, because it deals with humanity," Butler said. "I think what I want people to come away with, if nothing else, (is) to understand that I'm so committed to making things better here at the university ... that I'm literally willing to give up my humanity to see some injustices stop."

Over the past few weeks, he's been preparing for the strike: Butler updated his will and spoke to his physician.

After researching how the human body reacts to hunger strike, Butler gradually lessened his food intake in the past two weeks. He will still drink water during his strike.

Butler said he has also prepared himself spiritually. Before making the decision, he spoke to his pastor and prayed.

“[A]s the collective body of UM curators considers my request and decides on what your next steps will be do not consider that my life is in your hands because my life is in God’s hands,” Butler wrote in his letter.

Hunger strikes are a form of non-violent protest used by activists such as labor movement leader Cesar Chavez, who did not eat for 24 days in 1972. More recently, a few students at Tufts University in Boston participated in a five-day hunger strike to protest the university’s decision to lay off 20 janitors.

When a human body doesn’t receive calories from food, after a few days it begins breaking down fat to produce energy, according to an article published in the scholarly journal Nutrition and Clinical Practice.

During prolonged periods of time without food, the human body breaks down muscles and vital organs for energy and protein, consuming itself in order to survive. People of normal weight can last two to three months without food, according to the journal article.

At about 7:30 a.m. Monday, Butler met with a group of friends — he calls them his movement family — at Waffle House. He ordered two waffles with maple syrup and eggs. He only ate half a waffle before his strike began. After breakfast, he and his friends prayed.

"There is a more than 90 percent chance that I won't survive this, and that's why I've taken such precautions that I have," Butler said. "If I do lose my life through this process, I think it only promotes the message stronger ... that this is worth fighting for."

TELL US: How do you encounter racism? Some readers have said they don't think it's still a problem. What perspective would you offer?

GUEST COMMENTARY: Diversity training is a good step for MU, but it's not enough

Jonathan Butler writes that all demands submitted to the administration going back to 1969, and even before that, need to be acknowledged and addressed