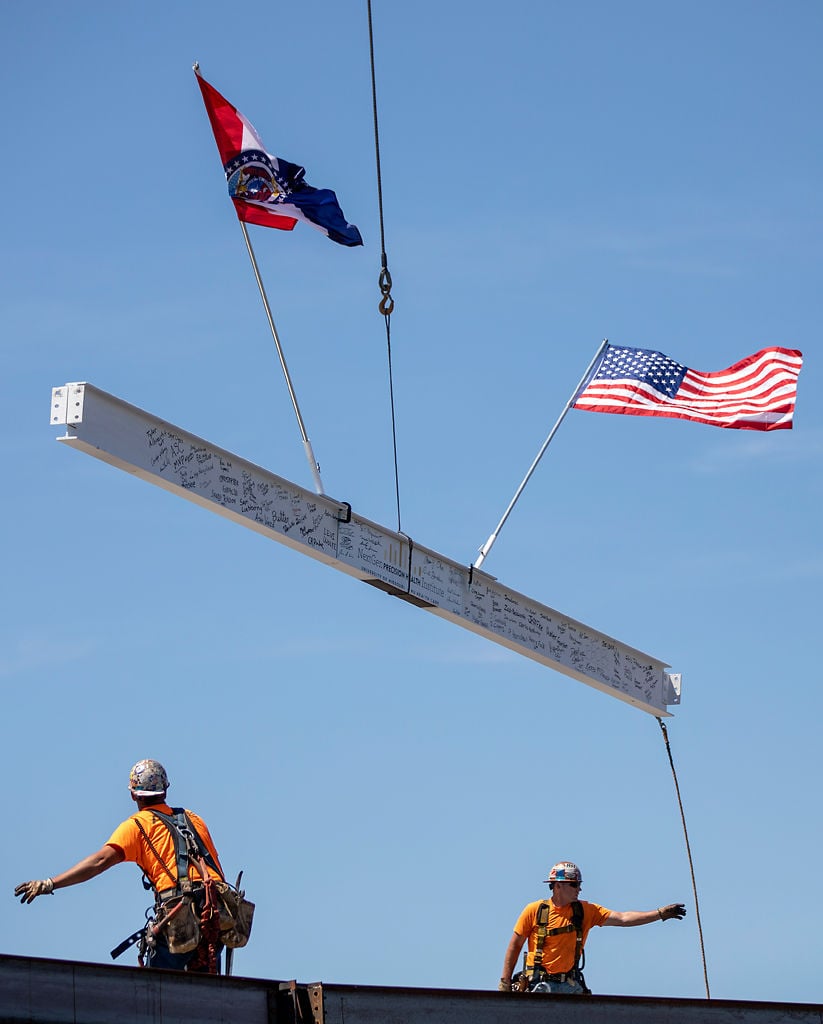 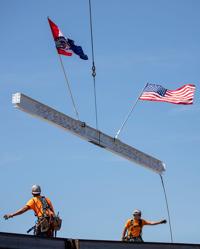 Workers install the signed I-Beam atop the NextGen Precision Health Institute building on Thursday at MU. 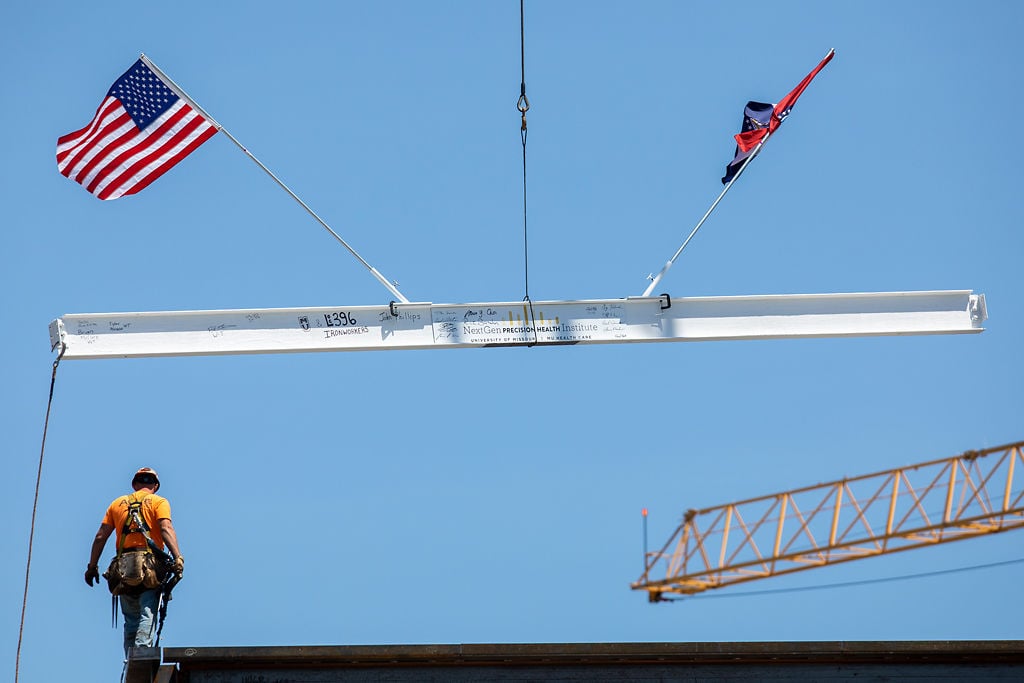 Workers install the signed I-Beam atop the Next Gen Precision Health Institute building on Thursday at MU. The building is slated to open by October 2021. 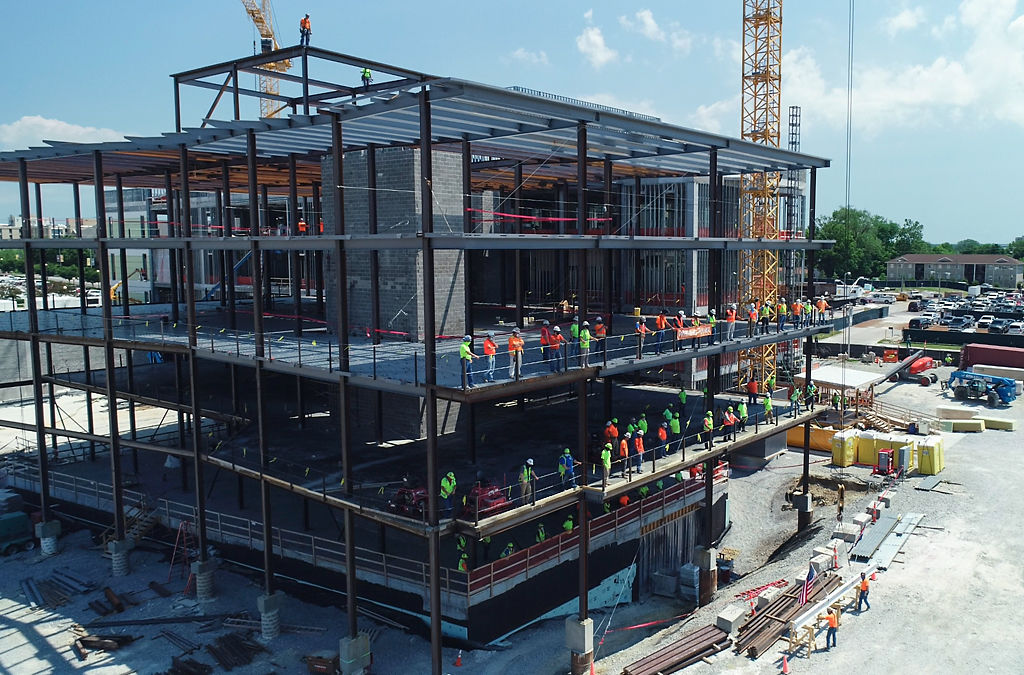 Construction workers stand at the edge of the NextGen Precision Institute's building prior to the start of the Topping-Off ceremony on Thursday. 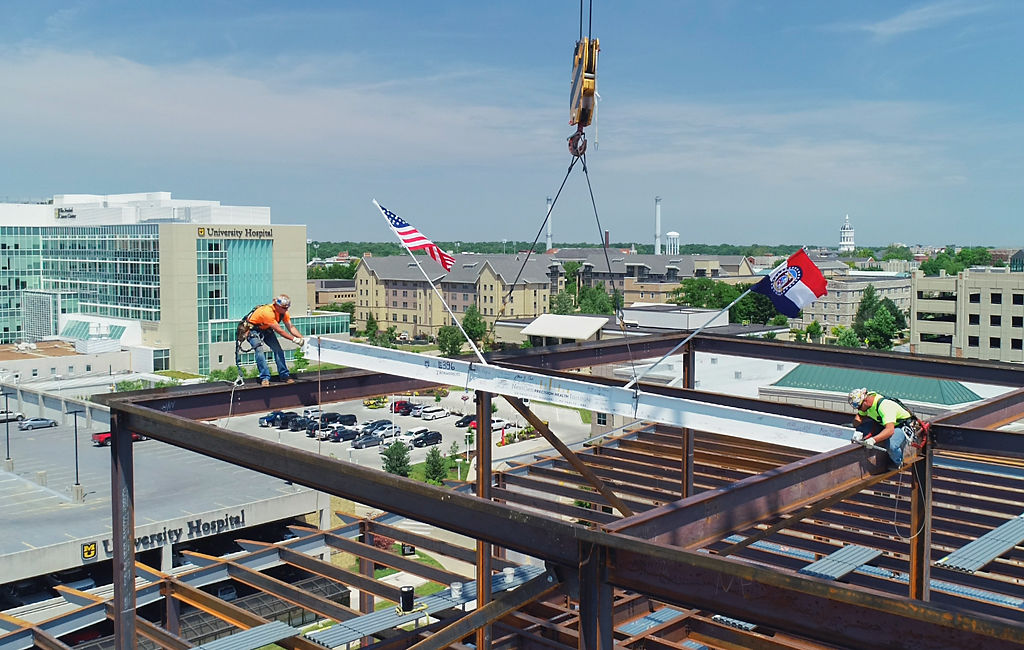 Workers install the signed I-Beam atop the NextGen Precision Health Institute building on Thursday at MU.

Workers install the signed I-Beam atop the Next Gen Precision Health Institute building on Thursday at MU. The building is slated to open by October 2021.

Construction workers stand at the edge of the NextGen Precision Institute's building prior to the start of the Topping-Off ceremony on Thursday.

Updated at 3 p.m. to include a range of other information from the UM System Board of Curators meeting.

MU students will be required to wear face masks while indoors on campus this fall as classes begin amid the continuing pandemic.

University of Missouri System President and Interim MU Chancellor Mun Choi confirmed the decision in a news conference after a UM System Board of Curators meeting Thursday.

Instructors will wear face shields, Choi said, which the university is working to secure. Face shields would allow deaf and students who are hard of hearing to better read instructors’ lips.

MU has not made a final decision if it will be able to provide face masks to students, but students “should be prepared to wear them in certain areas of campus,” MU spokesman Christian Basi said.

Decisions on whether the system’s other three campuses will require students to wear face masks are being decided in accordance with local health officials, Choi said, and are not yet finalized.

All four campuses will start in-person classes Aug. 24. MU is prepared to transition to hybrid or online classes during the semester depending on the progression of COVID-19 throughout the fall.

At the news conference, Choi affirmed the decision last week to keep the bronze sculpture of Thomas Jefferson on MU’s Francis Quadrangle despite protests from students and alumni. He called the decision final.

Choi emphasized that “the board felt very strongly about this position.”

The Board of Curators is exploring the possibility of combining the roles of UM System president and MU chancellor, board chair Julia Brncic said Thursday.

Input from stakeholders and experts is being taken under advisement by the board, she said, and there was “no reason why” it would not vote on the matter at its next meeting, July 28.

Choi, who has served as UM System president since March 2017, serves as interim chancellor. MU has not announced plans to form a search committee to fill the chancellor’s position after former Chancellor Alexander Cartwright departed for the University of Central Florida in April.

Basi said he “can’t speculate” on whether Choi would assume the permanent chancellor role if the positions are combined but said he was “sure that would be part of the discussion.” The board will discuss the matter further Friday.

A transition to online classes after Thanksgiving break could cost MU about $2.8 million per week, Curator David Steelman said during his presentation as chair of the board’s Finance Committee.

The system’s nearly $3.4 billion operating budget for fiscal year 2021, unanimously approved by the full board Thursday, contains “built-in contingencies” for such scenarios, he said. But anything other than a fully in-person fall semester could have “serious consequences” for the university’s financial situation.

A tuition increase of 2.3% for nearly all students across the system’s four campuses was also unanimously approved by the board Thursday as UM anticipates a continued budget crunch as a result of COVID-19.

“We always want to look at holding tuition down,” Steelman said. “But given the shortfalls we have, it’s absolutely mandatory to maintain our mission, in my opinion.”

UM faces a budget shortfall this fiscal year after the state cut over $52 million from the system’s funding. Planned state funding for the system for 2021 is flat, as the Missouri General Assembly compromised to restore planned cuts to higher education during the spring legislative session. Title IX update and regulations

MU is “leaning toward” continuing to require all university employees to be mandated Title IX reporters, according to an update provided to the curators.

New regulations published in May by the U.S. Department of Education lessened mandated reporting for all university employees.

The board also discussed the system’s Title IX statistics from academic years 2015 to 2019, including how sanctions were imposed (“other” can refer to a verbal warning or other lesser sanctions):

In total, 3,549 Title IX allegations were reported from the 2015 to 2019 academic years, according to the board update. The university must investigate all allegations reported to the Office for Civil Rights & Title IX.

A number of issues regarding implementation of the new federal guidelines were also raised by curators, including who should serve as the provided “advisers” to the parties involved in a Title IX hearing and who should be appointed as an independent “hearing officer.” The potential financial impact of those issues was also raised as a concern.

University leadership celebrated the “topping off,” or ceremonial placement of the final beam, of the NextGen Precision Health Institute Thursday as construction continues on the $220 million research facility.

Choi hailed the project during the live streamed event as “a collaboration involving all four universities,” and said the “impact of this project goes far beyond these universities.”

Choi and other university leaders emphasized the industry powerhouses behind the facility, including partnerships with companies such as Cerner and Siemens, as well as the various research centers and labs planned within the facility.

COVID-19 has brought health care and medical research to center stage, and the NextGen facility will contain a center for influenza and virology, Steelman said in the video presentation.

“We’re going to be launching projects that can cure pandemics before they occur,” he said.