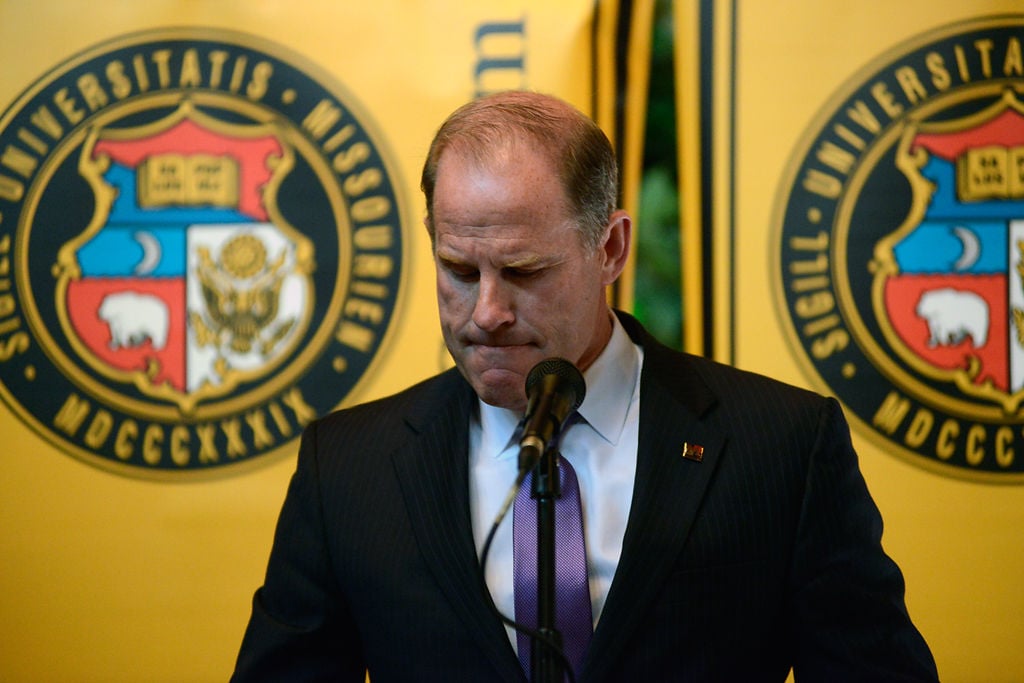 Tim Wolfe resigns as president of the UM System at a Board of Curators meeting Monday morning. His resignation came one week and one hour after graduate student Jonathan Butler began a hunger strike. 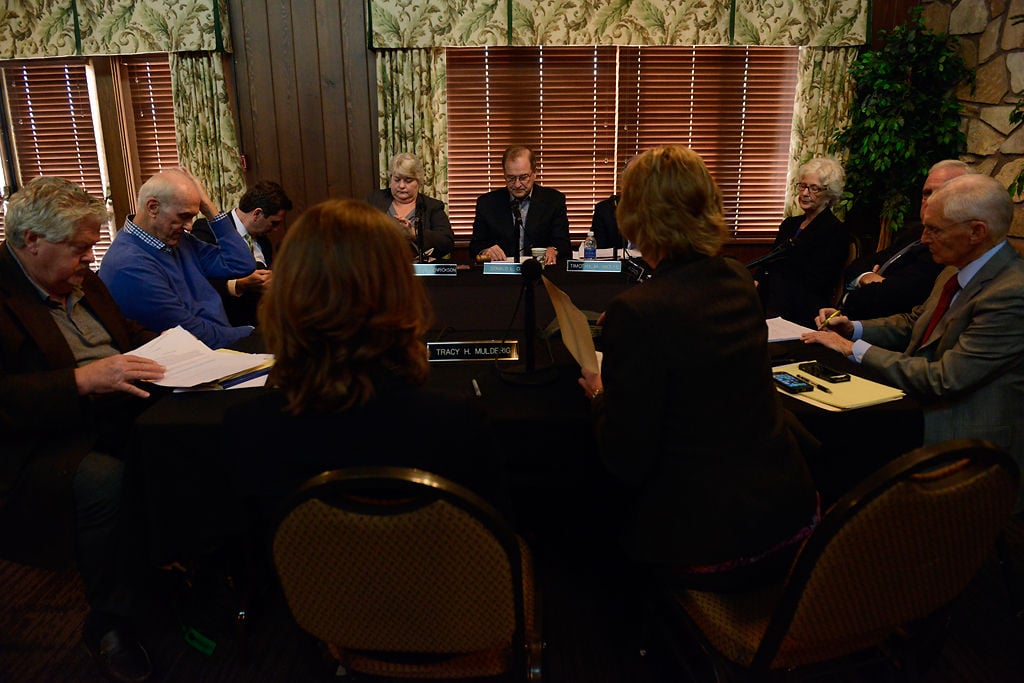 Tim Wolfe meets with the UM System Board of Curators on Monday at the start of an emergency meeting. 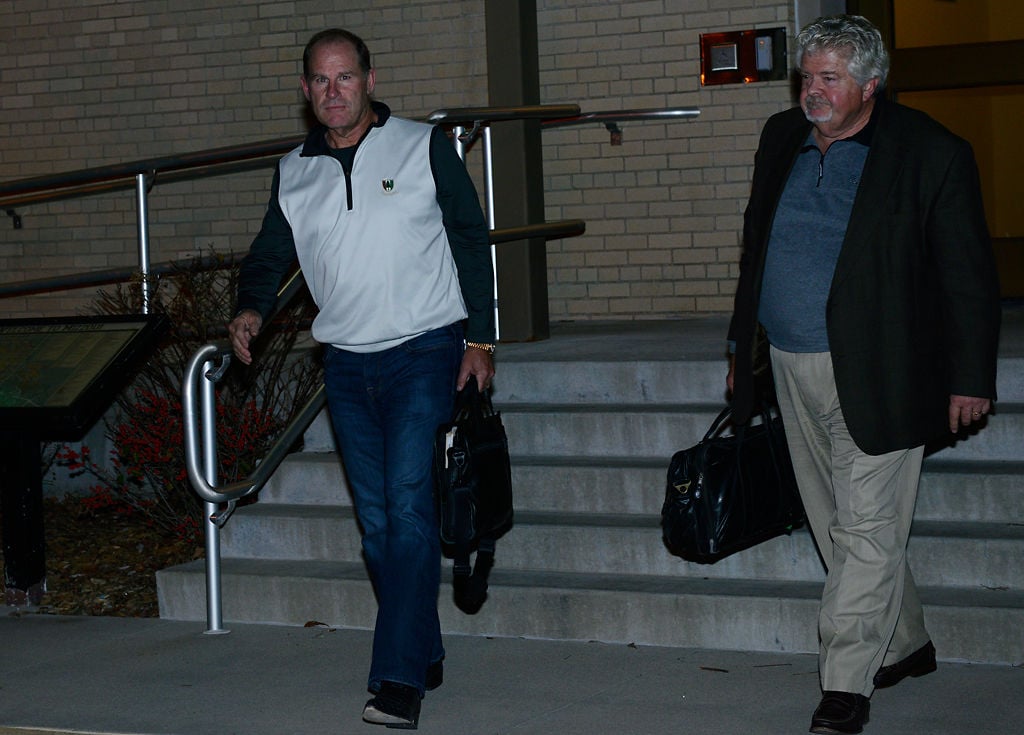 Tim Wolfe resigns as president of the UM System at a Board of Curators meeting Monday morning. His resignation came one week and one hour after graduate student Jonathan Butler began a hunger strike.

Tim Wolfe meets with the UM System Board of Curators on Monday at the start of an emergency meeting.

COLUMBIA — UM System President Tim Wolfe resigned Monday morning at an emergency meeting of the UM System Board of Curators.

"My motivation in making this decision comes from love" for Columbia and the university, Wolfe said.

Wolfe has garnered widespread criticism over the past few weeks for his inaction in response to protests about the racial climate at MU.

Wondering how the racial tensions at MU got to this point? Here's a timeline of key events.

Graduate student Jonathan Butler ended his hunger strike shortly after Wolfe's resignation. Butler stopped eating on Nov. 2, vowing to strike until Wolfe had been removed as president. He said Wolfe had failed to act on multiple incidents of racism at MU.

Butler ended the strike with an announcement on Facebook that picked up nearly 600 "likes" and more than 200 "shares" within 10 minutes.

Butler was seen leaving the quadrangle campsite in a car at about 11:20 a.m.

Concerned Student 1950, the group Butler helped found, called for meetings with the governor and the UM Board of Curators in a press conference at 1 p.m. Butler said he appreciated the prayers of supporters. The group said it would not answer other personal questions.

Pressure on the curators to remove Wolfe or for the president to resign mounted quickly over the past few days. The Missouri football team said Saturday that it would refuse to practice or play until Wolfe left.

About 30 feet from the Old Alumni Center, where Wolfe announced his resignation in the Fireplace Room, a few golfers were just teeing off for the morning at A.L. Gustin Golf Course. Around the center, reporters were pacing, making calls and texting while waiting for the curators to return. Behind the building, MU Chancellor R. Bowen Loftin paced the patio. A security guard stood beside him.

Wolfe had to repeat his resignation when Curator David Steward, who had phoned into the meeting, said from a speaker at the center of the conference table that he was unable to hear. Wolfe moved closer to the microphone but that didn't work. He waited silently. After more than two minutes he began again.

"As I said earlier — I am resigning as president of the University of Missouri system."

"Why did we get to this very difficult situation?" Wolfe asked. "It is my belief we stopped listening to each other."

He took full responsibility for the inaction that has occurred and for frustration on campus.

"This is not, I repeat is not, the way change should come about," Wolfe said. "Change comes from listening, learning, caring and conversation."

Missouri Student Association President Payton Head joined a group cheering and chanting on the Mel Carnahan Quadrangle, where protesters for the past week had been camping. Head’s Facebook post about someone shouting a racial slur at him from a passing truck as he walked on campus helped spark the series of protests that ensued.

Concerned Student 1950, so named because MU admitted its first black student that year, blocked Wolfe’s car during the Homecoming Parade on Oct. 10. Wolfe remained in his car as police ushered the protesters off the street.

At Carnahan Quadrangle, protesters gathered close, put their arms around each other, swayed and starting singing “We Shall Overcome.”

MU running back Trevon Walters said while watching the celebration with teammate DeSean Blair on the quad that the Tigers are "for sure playing" Saturday against BYU at Arrowhead Stadium in Kansas City.

"More than football, more than scholarships, I'm just happy our athletics department was behind us," Walters said. Even if the Tigers were 10-0 and in contention for the college football playoffs, he said, they would have gone through with the walkout.

Later, more than 10 football players stood in the middle of a circle created by human arms linked together. Some of the players were dancing. As they left the circle, Kerry Mullin, 48, a stay-at-home mom who lives in Columbia, thanked the players one by one. Her 6-year-old son, Taygen Givan, was alongside.

Word of Wolfe's resignation spread quickly throughout the Concerned Student 1950 campsite as people checked their phones for the news around 10 a.m. The crowd went quiet as the curators convened, then bubbled with conversation as Wolfe spoke inside the Old Alumni Center on Carrie Francke Drive.

Then, a woman stood on a table on the quad and grabbed the crowd's attention.

"This is a movement, not a moment!" she yelled to cheers. She later thanked everyone for coming.

Concerned Student 1950 vowed to continue and gathered in a group near the campsite. They sang "I believe that we will win" and danced as cameras caught the moment under the bright morning sun.

The group once again declined to talk with news media. Its tents remained standing at 11 a.m.

The Forum on Graduate Rights was still encouraging a walkout for Tuesday.

"THE WALKOUT IS CONTINUING," it said in a statement. "This runs deeper than Tim Wolfe, and is not only about racism, it's about labor exploitation — not just for ourselves, but for faculty, staff, and facilities and support workers.

"Now, more than ever, we need to demonstrate our sustained collective power — because we, with organized students, have helped demonstrate exactly what organized power has done and can do."

The forum announced it would hold a rally at noon at Traditions Plaza.

Wolfe, a native of Columbia and a graduate and former quarterback at Rock Bridge High School, became UM president in February 2012. He earned a business degree at MU in 1980 and had served in several leadership positions, including 20 years as an executive at IBM and as president of the software company of Novell Americas.

He said when he took the job as president that he hoped it would be "a very long and last role of my career.”

In his acceptance speech, he called for a diversity of opinion in planning for the future of the university.

"This formal process that we will build together needs to be inclusive and open," he said. "In the proudest tradition of the academy, it needs to incorporate different points of view, weighing many options and alternatives, respecting every opinion brought into the dialogue, and it needs to set the course that we can all get behind, have ownership in and be successful."

Not long after he took office, he told the Missourian that "the toughest leadership lesson he's learned is to know when to fold." (See the full profile here.)

"When you don't have the skills or the people to deliver a service or try to sell a product that's not in demand, no matter how hard you work, you won't be successful," he said. "So the leadership lesson learned is when you go into a situation, you have to evaluate the cards that you're dealt and play that hand to the best that you can. Sometimes you're dealt a losing hand, and instead of trying to stay in the game and bluff your way through, where you end up spending more money and wasting people's time, you just need to fold."

Gary Forsee resigned in January 2011 for vastly different reasons. He said he needed time to be with his wife to focus on her recovery from cancer, according to previous Missourian reporting.

After Forsee's resignation, the curators voted to approve a list of qualifications for the next system president. Strengths the board sought included a business background, a political presence in Jefferson City and the ability to communicate with university stakeholders.

Black MU alumni signed a statement of support for Concerned Student 1950 and other student activists.