A Missourian analysis of MU administrators across each academic unit and central administration shows women’s salaries average 25% less than men’s.

It is the first examination of MU salary equity since a 2015 study found a 15% pay gap between men and women. At that time, MU administrators said additional studies were needed to ensure equity, but no follow-up studies occurred.

This Missourian analysis was inspired by a more limited examination of MU administrator salaries done by Art Jago, a retired emeritus professor in the Trulaske College of Business, in November 2020. Jago’s data analysis found a gender pay gap of 20%, and in response, the Missourian worked with MU spokesman Christian Basi to assemble a more complete data set.

A traditional argument to explain such compensation gaps is that male professors typically have more years of experience. Rebecca Graves, the Inclusion, Diversity and Equity Committee chair on MU Faculty Council, rejects that argument.

It found no evidence of systemic wage discrimination but recommended further investigation of underrepresented faculty salaries in the College of Engineering, salary compression in the Trulaske School of Business and a procedure to reexamine salary equity on a periodic basis.

Toutkoushian found the 15% wage gap could be explained by rank, years of experience, departmental affiliation, academic position and research productivity.

Noting wage gaps were the norm in institutions of higher education, Toutkoushian wrote: “The presence of a significant unexplained wage gap does not prove that the employer has engaged in unfair treatment of men and women, but would be evidence to warrant further investigation by the institution.”

Toutkoushian’s analysis revealed a negative and statistically significant pay disadvantage for underrepresented faculty in the College of Engineering, according to the report. He recommended further investigation of faculty salaries and qualifications.

MU has not released any subsequent salary equity reports.

In early November 2020, the MU annual salary report was published.

Jago, the retired emeritus professor in the Trulaske College of Business, did an analysis of the data that noted significant pay increases among administrators, as well as a gender pay gap of 20%.

Jago’s methodology was simple: Each faculty member with dean, provost, chancellor or president in their title was included in the analysis; untitled administrators were ignored for simplicity. Jago, the MU Retirees Association’s Faculty Council representative, sent the analysis to all members of the council via email.

He noted that among Association of American Universities schools, MU had some of the lowest rates of faculty compensation, and among the 102 administrators revealed in his analysis, 32 had received pay increases in the past year. 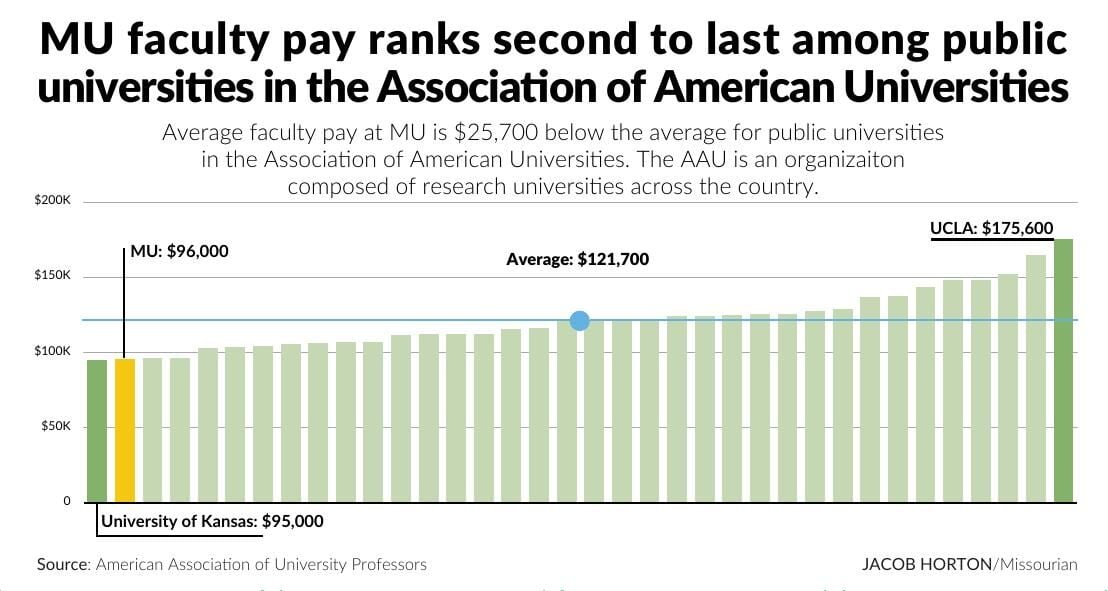 This came as a shock to him, due to meetings concerning MU’s budget in the wake of the pandemic.

“It seems somewhat hypocritical to speak of the so called economic tsunami,” Jago said, “and to speak on the need for austerity, and then to see the layoffs and salary cuts that have occurred, and then also see so many high paid administrators receiving raises this year.”

In the conclusion of his email, Jago wrote:

“With Thanksgiving upon us, please remember the 200 layoffs, 3,667 furloughs, 2,381 salary reductions, and 33 contract non-renewals experienced (so far) by Mizzou faculty and staff. I think it is probably safe to say that in terms of both the COVID illness itself and its economic consequences, the pandemic has probably had a greater impact on staff when compared to faculty (or, of course, when compared to our administrators).”

Actually, who is the administration?

In response to Jago’s email, the Missourian began verifying the analysis. But Basi, the university spokesman, said Jago’s process missed key administrators whose titles simply weren’t up to date. He also noted there is no clear list of who is considered an administrator at MU and felt a more expansive list was necessary to understand the full picture. 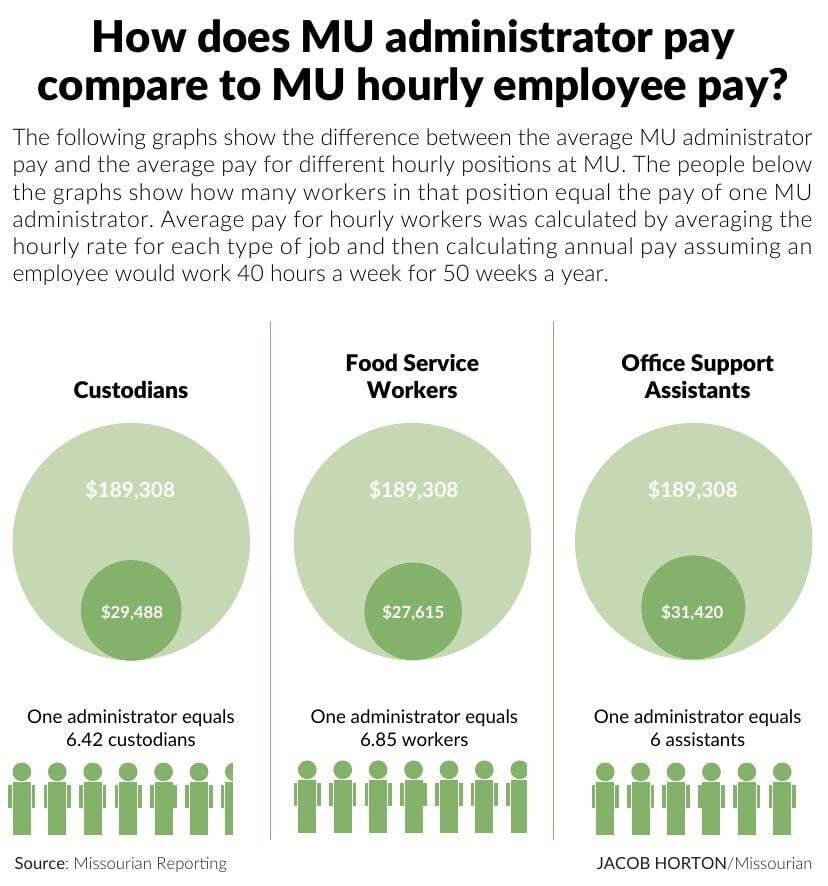 The Missourian then began monthslong correspondence with Basi, who worked with deans, provosts, vice presidents and vice chancellors across MU to create a more expansive list of administrators.

This isn’t a result of skewed data or outliers; the median salaries still show a 23.45% gap between men and women in the administration.

The limitations of each analysis should be recognized. While Jago’s analysis missed certain administrators with unclear titles, the subsequent list of administrators assembled with Basi is also somewhat inconsistent. Each dean, provost, president or chancellor used different metrics to determine who should be classified at the assistant-dean/provost/vice-chancellor/president level. Each academic unit or school has unique job responsibilities and the determination of who should be classified as an administrator is ultimately subjective.

Regardless, the data highlights a need to further examine an issue that remains a top concern for faculty and staff.

Faculty compensation and diversity were the top concerns of faculty in a 2019 campus climate survey.

On April 12, the American Association of University Professors published data on faculty compensation among all 36 of its public universities. MU ranked second to last, with an average full-time faculty compensation of $96,000, compared to an average of $121,700 among Association of American Universities public universities. MU ranked just $1,000 above the University of Kansas with a $95,000 average. 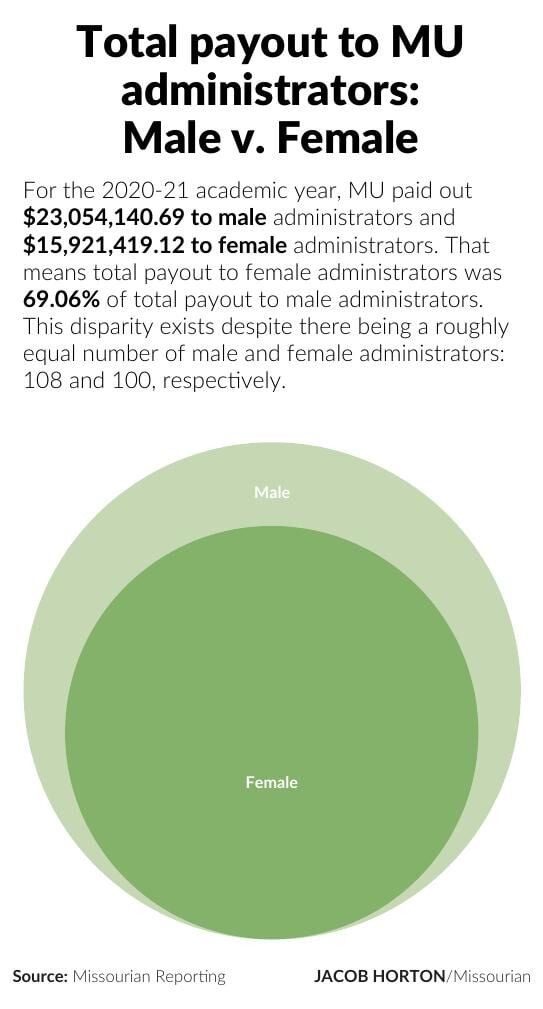 This spring, Graves said her committee met with Latha Ramchand, provost and executive vice chancellor for academic affairs, to discuss future initiatives to increase salary equity. Graves said another salary study has been discussed, but isn’t their main focus.

“These surveys are problematic, because statistically it all gets argued away. So we haven’t ruled out a survey,” Graves said. “But we’re looking at initiatives and programs to support and encourage women and faculty of color, especially mid-career, to assist them in getting career longevity and full professorship.”

Graves said she hopes future studies examine a broader range of factors that may influence salary, such as race, class and disability within specific academic units. Graves said research also needs to address why women have less experience in their positions, if they reach full professorship at equitable rates and how equitably child care costs affect their take-home pay.

Her committee also examines broader equity concerns within MU policies, such as this year’s new expectation that snow days not interfere with faculty roles.

“If you’re home for a snow day, so are your children. You’re gonna be doing child care,” Graves said. “So the broader issue is that even if they can work at home, they have children there.”

“We still have work to do, and we know that,” Basi said.

Basi noted that many top female administrators, such as former Vice Chancellor and Engineering Dean Elizabeth Loboa, are in high demand and often get recruited by higher paying universities.

MU has also taken several steps toward pay equity since the 2015 study, Basi said. One initiative has been a switch to amount-based automatic raises, rather than percentage-based raises with certain performance-based promotions. The automatic raise when being promoted to full professor from associate professor is the same across colleges, Basi said, which MU hopes will reduce disparities between high paying fields (like engineering) and lower paying fields (such as education).

“The systematic practices of how you do consistent performance-based raises, like promotion and tenure raises, is really important in how this plays out,” Chris Riley-Tillman, associate provost for faculty affairs, said.

Riley-Tillman said MU also has a process for equity adjustments within individual departments.

If there’s a large disparity in salary among employees with similar workloads and performance, chairs and deans can request off-cycle raises, he said.

“You really have to look case by case for that remediation.”

The university has been working within steep budget cuts since March, when state funding for MU was cut by about $35 million.