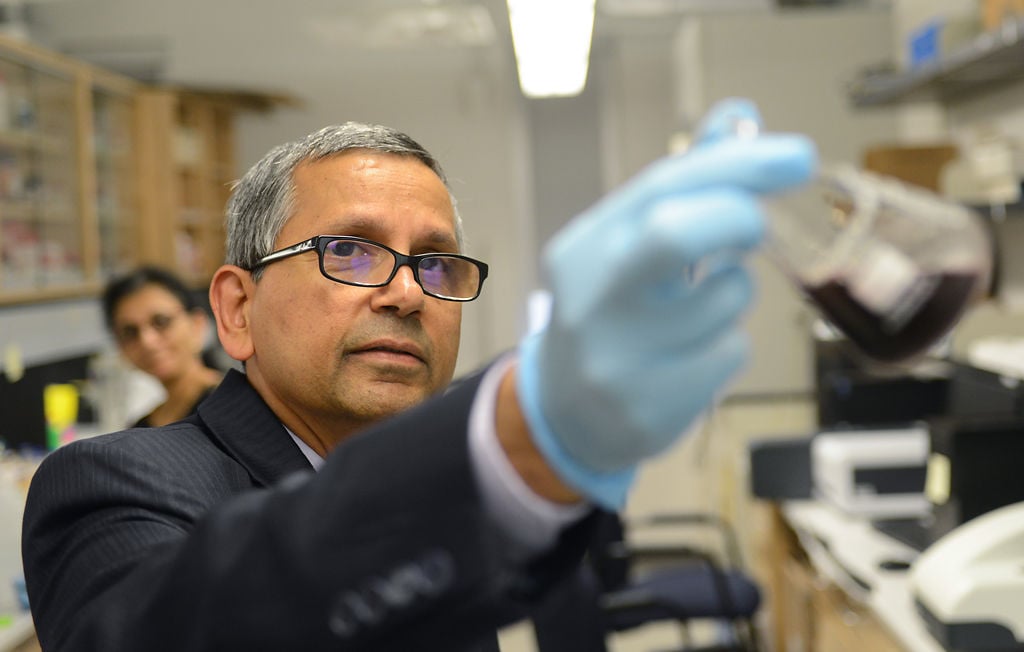 Kattesh Katti, Distinguished Curators Professor of Radiology and Physics at MU, holds a beaker full of liquid in his lab at the MU medical school on Oct. 6. Katti’s research focuses on the elimination of toxic chemicals in the research of nanotechnology, or “green nanotechnology.” 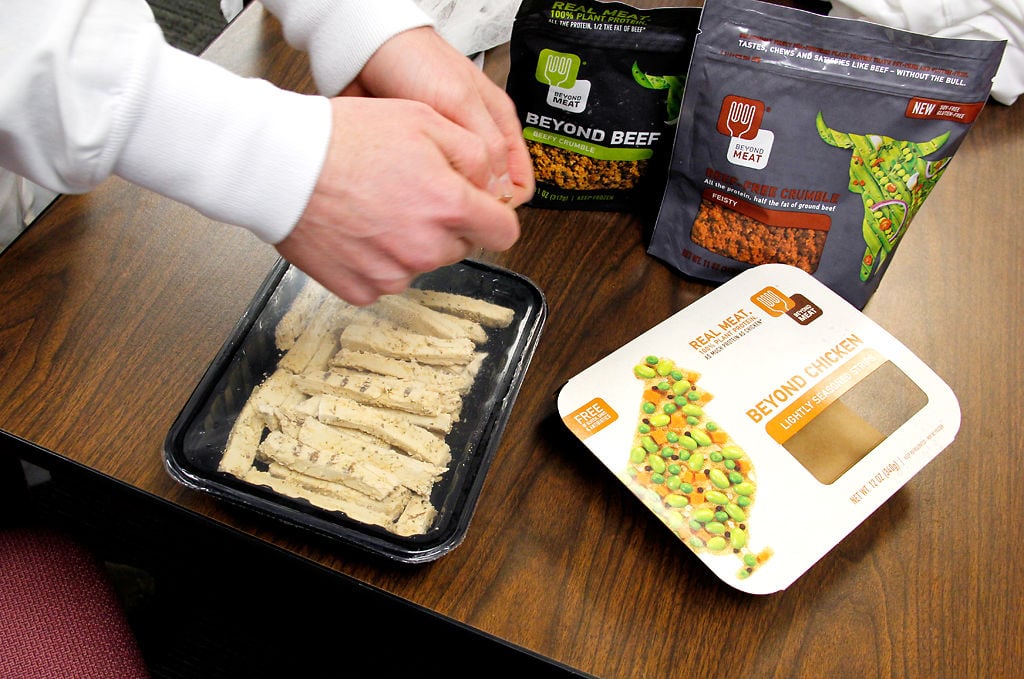 Beyond Meat Process and Product Engineer Justin Fuller explains the consistency of the chicken-flavored product on March 16, 2015, at the Beyond Meat facility in Columbia. The products look, feel and taste like their animal meat counterparts, Fuller said. Beyond Meat has been able to expand its product line to include both chicken-flavored and beef-flavored plant protein products, thanks to investors such as Bill Gates. 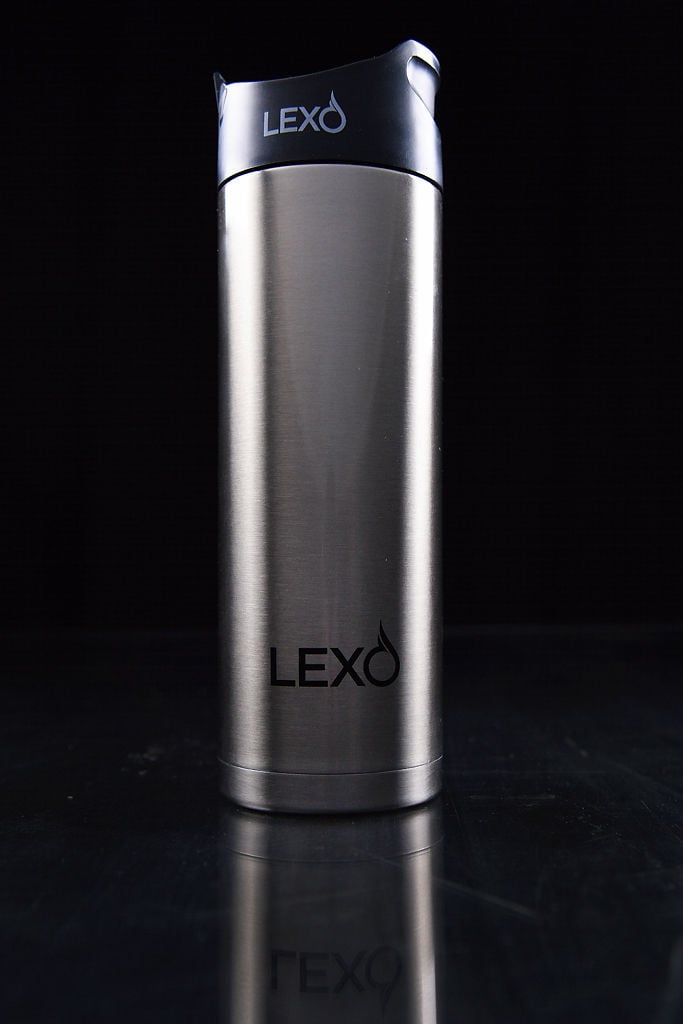 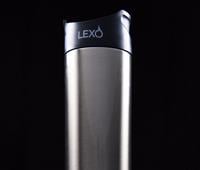 The Lexo is a travel mug designed by MU professor Hongbin “Bill” Ma. The Lexo cools a beverage to 140 degrees and maintains that temperature for up to eight hours.

That product is a coffee mug that instantly cools a beverage to a drinkable temperature and then keeps it there for several hours.

Ma, a mechanical and aerospace engineering professor at MU, is working on the second generation of the mug right now, and he’s pretty excited about it.

Ma says he’s happy with that and thinks it’s fair. He doesn’t know how to file patents to protect his inventions, so having the university go through that process for him was very helpful.

But issues about who owns what can arise. In 2017, a lawsuit by the University of Missouri System went to trial in the 13th Circuit Court. The defendant was former chemical engineering professor Galen Suppes, who allegedly filed for patents without permission from the university.

Although the terms the university offers inventors on campus compare favorably to other campuses’ profit-sharing rules, some MU inventors have raised questions about intellectual property and what the university could be doing to get more patents turned into products.

One issue in intellectual property at MU, Ma said, is with patents that never get commercialized. Not all patents result in products that can be successfully commercialized like his coffee mug, Ma said. So patents can languish without the technology ever being developed.

That’s where the university should invest more, said Kattesh Katti, who has been at MU since 1990. Like Ma, Katti said the university could be better at marketing patents to prospective companies.

“It’s one thing to get the faculty to perform the research, take those discoveries from invention disclosures all the way to the issue of patents, but once the patents are there, you don’t want the patents to sit on the shelves” and gather dust, Katti said. “You should be able to market those patents.”

Katti said the Office of Technology Management and Industry Relations at MU is doing a good job, but it needs more staff to handle the continually increasing patent portfolio of MU.

On the other hand, the university has been doing the right thing by encouraging faculty to contribute to the economic development of the university, he said.

“They do reward you very well,” Katti said.

What about the patents that aren’t commercialized?

Chris Fender, director of MU’s Office of Technology Management and Industry Relations, said there are many reasons a patent might not result in a product. When something is invented at MU, it’s typically not ready to be sold in the marketplace. It takes investment from a third party to turn the technology into a product.

“Marketing a patent is not like marketing a product,” Fender said. “These are technologies. Companies that license technologies need to be ready to devote a large amount of resources to bring a new product to market.”

In any case, the focus shouldn’t just be on the revenue part of intellectual property, he said, because there are several other benefits, and not just for the university.

Fender said that historically, there has been some tension in academic institutions between publishing versus patenting.

Once something is published in the public domain, it is very difficult to patent it, Fender said. Because of that, Fender said his department’s goal is to work with researchers so they can evaluate inventions and devise a strategy for protecting their work before it’s published.

“Our goal is never to tell someone not to publish their research results,” Fender said. “We want to work with them on the timelines they have for publishing and how can we protect intellectual property if it needs to be protected ahead of that time.”

Fender said that it’s more difficult for the everyday person to benefit from technology if it’s just published in a journal. Turning it into a commercial product is how the technology can benefit everyone, and that takes investment.

Filing patents creates assets that appeal to private industry, he said, because it allows a company to exclude others from using that technology for a period of time.

“The patent, the intellectual property, really creates an asset that somebody will invest in and say, ‘Okay I’m going to take some of my money and invest in advancing that to become a product,’” Fender said.

Fender gave the example of the company Beyond Meat, which produces meat substitutes, and it all started with research done at MU.

Fu-Hung Hsieh and Harold Huff created a soy-based chicken substitute, an invention that has had lasting impact on Columbia.

The university licensed the invention to Beyond Meat, a California-based company that sells exclusively plant-based meat substitutes, according to the company’s website.

Very small amounts of the meat-substitute were being produced in the lab, Fender said, and turning that into a product that can be produced on a large enough scale to be marketed successfully can be a risky investment.

That’s where the profit motive of intellectual property comes into play, he said.

“We want to create an asset that incentivizes somebody to put money in at a very high risk to advance that in order to bring a product that is useful and benefits people and that people are going to purchase,” Fender said.

Part of the agreement the university worked out with Beyond Meat was to invest in central Missouri as part of its commercialization plans, which resulted in a factory off Vandiver Drive in Columbia.

“We want to keep these things as local as possible,” Fender said. “We first want to benefit central Missouri and the state of Missouri.”

The agreement with Beyond Meat has created close to 100 jobs in central Missouri, Fender said, and brought out-of-state investment dollars into the Missouri economy.

Another positive benefit of intellectual property at MU is resume-building experience for MU students who work in the lab with researchers, he said.

“When the university engages with companies, we’re trying to provide real world experiential learning opportunities that can give students an advantage in the job market,” Fender said.

In the 2016 fiscal year, MU received close to $15 million in licensing revenue. Although this year’s licensing revenue number hasn’t been finalized, Fender said he was expecting a significant decrease due to patents expiring.

The UM System receives royalties on an invention from the licensed third party as long as the patent exists. When the patent expires, the royalties stop as well.

Fender said that while revenue from intellectual property is important for the university, he always wants to keep the primary goal of having innovation at MU benefit people, and the way to do that is through commercializing products.

“If we do all these things well and we think about creating a pathway for innovation to become a benefit to society, then the monetary benefits will happen for us and we’ll be successful.”

The back end aside, the UM System’s intellectual property rules are similar to those of other universities.

That’s where there’s a difference from one university to another. The percentage of royalties the inventor receives after the university has licensed the technology to a third party for development is as follows:

Of those universities and systems, the UM System was alone in giving the inventor a percentage of the royalties received before deducting the costs associated with obtaining a patent and other costs incurred through the patenting and licensing process.

Suppes was not the first university employee to be sued by his employer for violating an employee contract.

According to the New York Times, in 1990, the University of Pennsylvania sued Dr. Albert M. Kligman for pursuing a patent and entering into a deal with a third party without permission from the university.

The university argued that the university owned the rights to his invention and that he violated his employment contract by entering into outside agreements.

The case was settled out of court.

Generally, it is not uncommon for university employees to be required to give up rights to inventions created within the scope of their employment and then receive partial revenues from their university in return.

In the Suppes intellectual property lawsuit, Suppes’ defense attorney, George Smith, argued that two people can own something but that the university was asserting sole ownership of Suppes’ invention — a technology that converts glycerin to acetol, propylene glycol and antifreeze.

Fender said he could not comment on the Suppes case. But speaking broadly about intellectual property, he discussed the generosity of universities when compared to the private sector.

When working for private companies, Fender said it is common to assign the company all rights to your inventions on day one, something he tells researchers at the university.

If you were working for a company, you wouldn’t have as much freedom to pursue the kind of research you want to, he said, and you wouldn’t have the incentive of getting a portion of everything the company made based on your inventions.

“That advances innovation and provides incentive for people to continue to research,” he said. “So our participation in that whole process, for academia to participate in that is really important for advancing innovation.”

Former MU professor must pay $600,000 in damages to university

The jury ruled in favor of the UM System Board of Curators on two of the three claims in an intellectual property lawsuit.