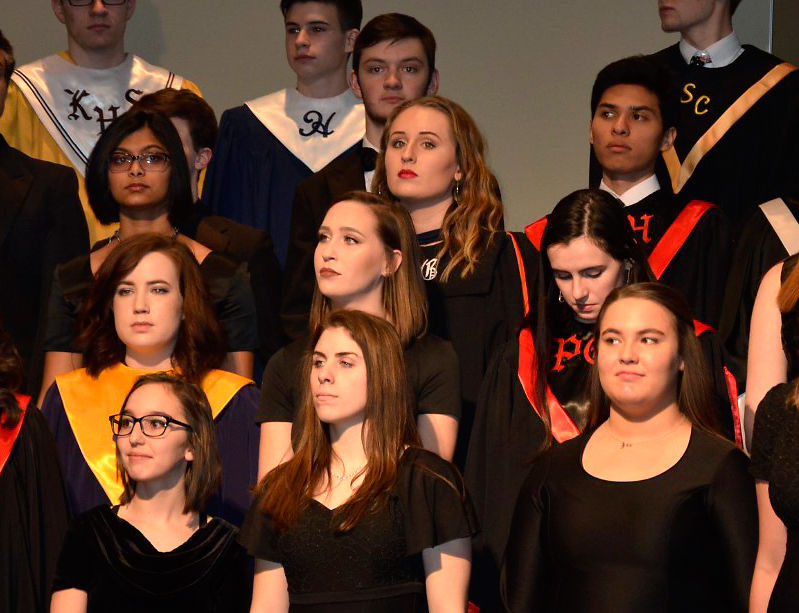 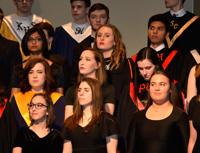 Madison Rowe, center, looks to the conductor for the starting cue at the All-State Choir concert on Saturday at Tan-Tar-A Resort in Lake of the Ozarks. She practiced about 27 hours for the performance. 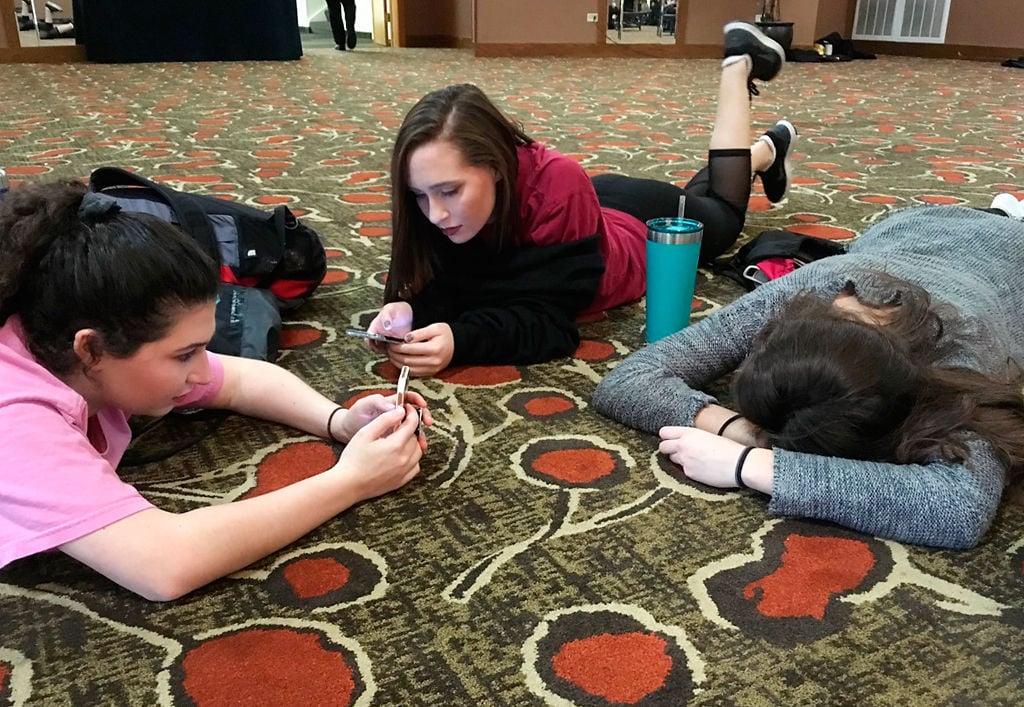 Raya Aberbach, left, Madison Rowe, middle, and Claire Nieder, right, relax while awaiting their choir performance Saturday at Tan-Tar-A Resort in Lake of the Ozarks. They were counting down the minutes until they could watch the All-State Orchestra performance and until Rowe’s mother arrived with food for them.

Madison Rowe, center, looks to the conductor for the starting cue at the All-State Choir concert on Saturday at Tan-Tar-A Resort in Lake of the Ozarks. She practiced about 27 hours for the performance.

Raya Aberbach, left, Madison Rowe, middle, and Claire Nieder, right, relax while awaiting their choir performance Saturday at Tan-Tar-A Resort in Lake of the Ozarks. They were counting down the minutes until they could watch the All-State Orchestra performance and until Rowe’s mother arrived with food for them.

Drivers heading south to Lake of the Ozarks last Wednesday may have spotted a sleek, white limousine cruising down the highway. Its passengers were Hickman High School students on their way to the Missouri Music Educators Association's annual conference at Tan-Tar-A Resort.

Senior Claire Nieder said the limo was the Hickman Performing Arts Boosters' way of thanking the performers and saying, "You guys make us look good."

The students were selected for this year’s All-State ensembles: choir, orchestra, band and jazz band. Nieder was one of only four students from the Northeast District singing soprano in the choir. Three of her friends, Madison Rowe, Raya Aberbach and Lauren Wagner, also seniors, were chosen to sing alto, with Wagner selected as an alternate.

It's a highly competitive process and a huge honor to be chosen.

"You don't just make it to All-State by shrugging it off," Nieder said. "You have to be willing to put in the hours."

However, these girls do it ultimately because they love singing.

"It's fun to sing with such talented people and with people you're not used to singing with," Aberbach said.

Although the singers worked hard for this on their own, they said they owe their success to their teacher, Robin Steinhaus. She conducts all three choirs at Hickman and runs the musical theater department, in which she has been involved for 20 years.

"If Robin wasn’t hard on us, I definitely would not be where I am," Rowe said. She and Aberbach both said Steinhaus convinced them to audition for the group.

"I was hesitant about it, but Robin was like, 'Well, I think you should. You're All-State material.'" Aberbach said.

Steinhaus said encouraging her students to put themselves out there is part of her job.

"I just know their voices, and I knew they had potential," she said.

Although the singers joke they're scared of Steinhaus' tough love, the respect and affection they have for their teacher is clear.

"When we do extracurricular stuff, she really opens up," Aberbach said, "'cause she wants us to do our best all the time, and in school sometimes she gets really intense about it. But outside of school, she's really expressive about how she's proud of us."

Steinhaus said her teaching style is about honesty, transparency and keeping an open line of communication.

"I'm pretty tough on people just because I see their potential and I have high expectations for them, because I think you should have high expectations for yourself," Steinhaus said. "I always think you should be completely honest, in a tactful way, with your students and they appreciate that because they know you have their best interest at heart."

Beth Shoyer, Aberbach's mom, called Steinhaus a "life-changing teacher" and "the kind of teacher you want your kids to be able to have."

"There's no class you can take to prepare you, really, to be a teacher," Steinhaus said. "You have to do it your way, you have to be authentic, and it has to ring true to your students."

Steinhaus said that to her it's also about teaching life skills — how to be themselves, be good people and be responsible for themselves. She said she tries to emphasize the value of learning from their mistakes.

"It's not all about teaching notes and vocal technique," Steinhaus said.

Still, the music training is a key part of their education. Nieder said Steinhaus is the most effective conductor she's had. The choir is usually busy preparing for some concert or show.

"We get a break whenever school gets out — there are no breaks," Steinhaus said. The hours of practice are essential in helping these students accomplish something as big as making it to All-State.

Each year, the approximately 200-member choir accepts four students per voice part: soprano, alto, tenor and bass, from each of the 11 MMEA districts in Missouri. All juniors and seniors who make their District Honor Choir in November are eligible to audition. They each must perform a song and complete a sight reading exercise for a panel of judges, who score them based on note accuracy, dynamics, tone and overall quality. The top four scorers in each voice part move on to All-State.

Before the convention weekend, the students met twice to rehearse with their district. The Hickman girls said they liked these early rehearsals because they get to be surrounded by people who work as hard and care as much as they do.

"You're singing with 24 of the best singers in the district," Aberbach said.

The hours of work don't stop once they get to Tan-Tar-A. After arriving and settling in Wednesday, they were scheduled to rehearse from 8:30 p.m. until 11:45 p.m. They attended three rehearsals Thursday, three more on Friday and one Saturday before the performance that afternoon. Counting the two rehearsals before Tan-Tar-A with their district, they were scheduled to spend about 27 hours practicing for this one performance.

Although each rehearsal at the lake lasted between two and four hours, the schedule still allowed time for students to enjoy themselves and make friends from other schools. Nieder, who also participated in the choir last year, said this is one of the most memorable parts of the experience.

"There were times when we had breaks and we had all the sopranos and some altos come and we'd sit in the middle of the hall and just practice our music," Nieder said. "We got to know each other that way. You get to know the people in your section really well because you wake up with them, you all get ready together, you go to every rehearsal with them, you make all your plans and go out to dinner with them."

Before leaving Wednesday, the girls were already planning a trip to the resort's bowling alley and a "pancake party" with their roommates, the other girls from their district.

"We've made a grocery list and we're bringing our own food," Aberbach said.

Because the choir was the last to perform this year, Nieder, Aberbach and Rowe also had four hours of down time before their performance. The girls sat sprawled on the carpet of Tan-Tar-A's Crystal Ballroom, laughing together at pictures on their phones. Rowe dumped the contents of her makeup bag out on the floor, and they perfected their looks for the performance. Nieder and Rowe took turns doing cartwheels and handstands, waiting for the minutes to pass.

Meanwhile, the upstairs salon was filling with parents, teachers and students excited to hear the four groups perform.

"It fills up at every single concert. I was here at noon to get this chair," Steinhaus told Aberbach's parents after the show. She said this is probably the biggest event Tan-Tar-A has each year. Combined, there are about 500 students participating in the ensembles, and most of them will have at least parents, and probably also siblings and grandparents, coming to watch them. That is in addition to all the music teachers and music education students attending the conference.

For these parents and teachers, it's worth the drive. The students, directed by Westminster Choir College's Amanda Quist, performed six pieces. Sniffling could be heard in the audience during "Look Up, Look Down," which tells the story of someone who has lost a loved one, and "Even When He Is Silent," which gets its lyrics from a famous quote found scrawled on the wall of a concentration camp after the Holocaust. They also performed a traditional Xhosa song from South Africa, a piece by Bach and an a cappella arrangement of "Great God Almighty."

Watching the 30-minute performance, it was easy to forget that the mature, highly trained voices filling the room belonged to 17- and 18-year olds. Twice the director asked the parents and teachers in the crowd to stand and be recognized for their contributions to the students' success. But in the end, the students were the ones who received the loudest applause and cheers.

On Monday, Aberbach, Nieder and Rowe returned to their class schedule, including their usual choir rehearsal with Steinhaus. But the elation of performing with the All-State Choir won't fade soon.

MU's all-female a cappella group sings its way to success

After winning first place at a recent quarterfinal for the International Championship for Collegiate A Cappella, The Naturelles are moving forward with an underdog spirit and a message of powerful womanhood.