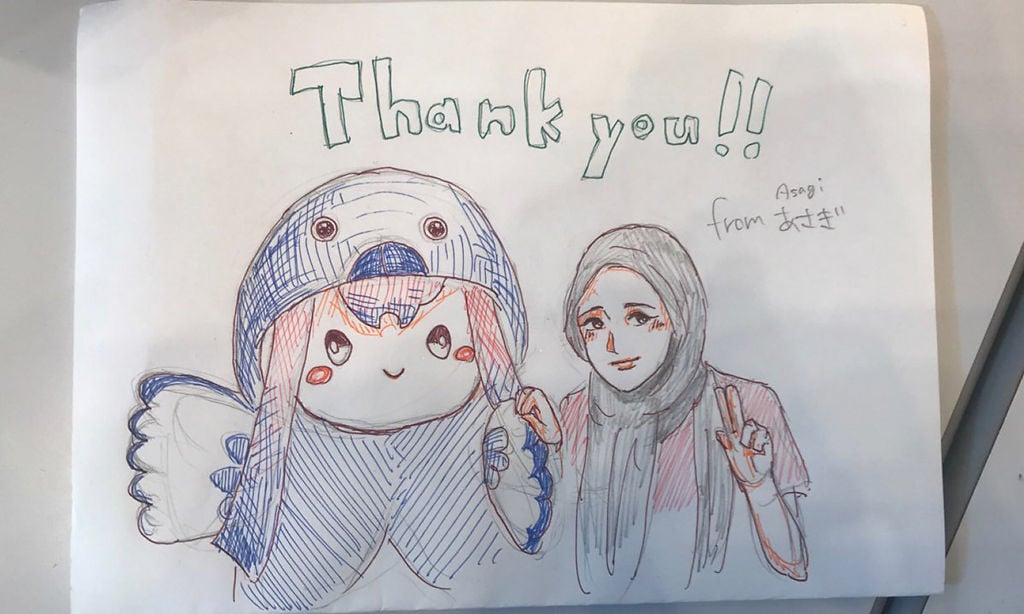 Anousa El-Walid sent a note to thank the festival mascots. They visited her dressing room just so she and the Columbia Public School students could get pictures with them. The mascots responded to El-Walid’s note with a drawing of her and the mascot. “That was the nicest thing that they did for me,” El-Walid. “It was so personal.” 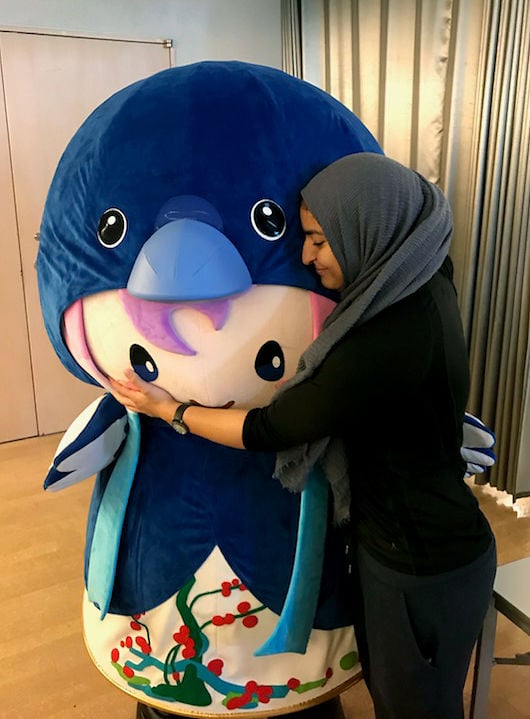 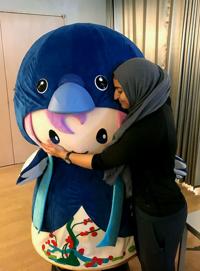 Battle High School junior Anousa El-Walid hugs one of the mascots from the 42nd National High School Culture Festival. Mascot characters are commonly used to characterize an organization or a region and are known for their “kawaii,” or cuteness.

Anousa El-Walid sent a note to thank the festival mascots. They visited her dressing room just so she and the Columbia Public School students could get pictures with them. The mascots responded to El-Walid’s note with a drawing of her and the mascot. “That was the nicest thing that they did for me,” El-Walid. “It was so personal.”

Battle High School junior Anousa El-Walid hugs one of the mascots from the 42nd National High School Culture Festival. Mascot characters are commonly used to characterize an organization or a region and are known for their “kawaii,” or cuteness.

The road transitioned to loose gravel as the ensemble, consisting of 20 student percussionists from Rock Bridge, Hickman and Battle high schools, neared the end of the parade route. Spectators overflowed from the sidewalk into the route, cramping the percussionists’ space.

All of the sudden, the students scattered.

This was part of a choreographed cadence called “The Panther.” In this routine, CPS performers left their designated positions in a randomized frenzy, stopped on a beat then ran and stopped and ran and stopped for several measures, ending up back where they started.

Battle High School junior Anousa El-Walid said the band pulled off this cadence despite having uneven terrain and less space to scatter during the parade than it had in practice.

“I definitely remember playing and looking down and saying, ‘Oh, there’s a bump right there. Oh, I almost tripped. I almost ran into some old man,’” she said. “Everybody was laughing. Not like laughing, laughing, but you could see everybody was having a great time.”

Nagano, which encompasses the city of Matsumoto, is known for its annual Taiko Drum Festival, which takes place at the end of July next to the historic Matsumoto Castle. With this cultural history, Columbia Public Schools Superintendent Peter Stiepleman said in an email that bringing a drumline to Japan made a lot of sense.

“Plus it is quintessentially American,” he added.

For the Columbia percussionists, preparation for their week in Japan extended beyond rehearsal. Students took Japanese etiquette classes and learned about the Japanese culture, which Battle sophomore Logan Morris said is the “polar opposite” of American culture. One thing Morris learned about was the significance of chopsticks in funerals.

“You don’t pass anything with chopsticks person-to-person, because they pass the bones of people after they’re cremated,” Logan Morris said.

He learned to pass food by putting it down on the plate first so the other person could pick it up.

“You don’t ever stick your chopsticks in your rice when you’re done, because people leave their chopsticks in the ash during a funeral, so it’s not very nice etiquette at all,” he said.

Morris’ mother, Bethany Morris, said she had what she considers to be a normal amount of “parent anxiety” about sending her son abroad. However, she trusted the chaperones, one of whom was Stiepleman, and appreciated their frequent social media updates.

“Their days were very packed, and they performed several hours a day, every day,” Bethany Morris said. “There wasn’t a whole lot of time for students to communicate with the parents very much, so we were really waiting for those updates. It was great.”

Stiepleman, who has given himself the title “Ambassador to Hakusan,” Columbia’s sister city in Japan, tweeted updates, often with the hashtag #CPSbest. He said in an email #CPSbest is about highlighting the best of the school system at a time when people focus on what isn’t going well. Watching the CPS students represent their country gave Stiepleman hope for the future, he said.

“For so many, the world has been turned upside down, but this trip gave me hope that we can still build bridges of friendship and trust,” he said.

Columbia Percussion United also performed with Japanese marching bands in the stadium from the 1998 Winter Olympics in Nagano.

El-Walid said that she and the rest of the CPS students were continuously surprised with how accommodating and generous the people of Japan were to them. For instance, she thought the festival’s mascot was cute, but when she tried to get a picture with it, she was whisked away to another rehearsal. She thought she was never going to get the picture.

The next day, she and the other students were hanging out in the dressing room when they heard a knock at the door. Both of the festival’s mascots came in.

“Everybody was freaking out,” El-Walid said. “Everybody wanted pictures. Everybody wanted to interact with them. They had dressed up just so I could get a picture, and they ended up staying in our room for half an hour.”

Toward the end of the trip, the CPS students wrote thank-you notes to everybody who helped them in Japan. El-Walid decided to thank the team behind the mascot interaction.

“It was just a piece of paper that I had to offer,” she said — but the team wanted to return the favor.

The mascot returned to the dressing room with an anime drawing of El-Walid and the mascot. At the top of the drawing was the phrase, “Thank you.”

“I loved it,” El-Walid said. “I was looking for a picture frame to buy when I was there because I didn’t want anything to happen to it.”

One night, the high school students from every country got together to taste Japanese tea, make origami and exchange gifts from their countries. The Columbia students planned to bring CPS pens and music boxes that played music from their performance, but the shipment would have arrived the day after they left Japan, Morris said. Instead, they found an opportunity to share American culture through dance.

The event’s organizers made a playlist with songs from each represented country. When Cupid’s “Cupid Shuffle” came on, two Americans got up on a little platform and started to dance along. More followed.

“Once we got midway through the song, other Americans were gesturing for other people to join us,” El-Walid said.

Eventually, most of the people in the room, from every country, were dancing on the stage together.

“It was a song that, I’m assuming, none of them have ever heard before,” El-Walid said. “They went up, and they started dancing. It was a very cool moment.”

“Going to a different country really humbles you in multiple ways,” he said. “It really makes you want to be a better person.”

Columbia Percussion United will perform a Missouri-style medley at a summer festival of fine arts in Nagano, Japan, this summer.