The number of COVID-19 cases and associated hospitalizations increased dramatically over the summer for mid-Missouri children and teens.

In Boone County, more than 450 COVID-19 cases were recorded for residents 19 and younger in August, compared to 36 cases for the same age group in May, according to the Columbia/Boone County Health and Human Services Department.

The number of hospitalizations associated with pediatric COVID-19 cases tripled over the summer at MU Women’s and Children’s Hospital, jumping from three in June to nine in August, according to MU Health Care.

Since May, the hospital has admitted 23 pediatric COVID patients, a “handful” of which were admitted to the Pediatric ICU, MU Health Care spokesperson Eric Maze said. 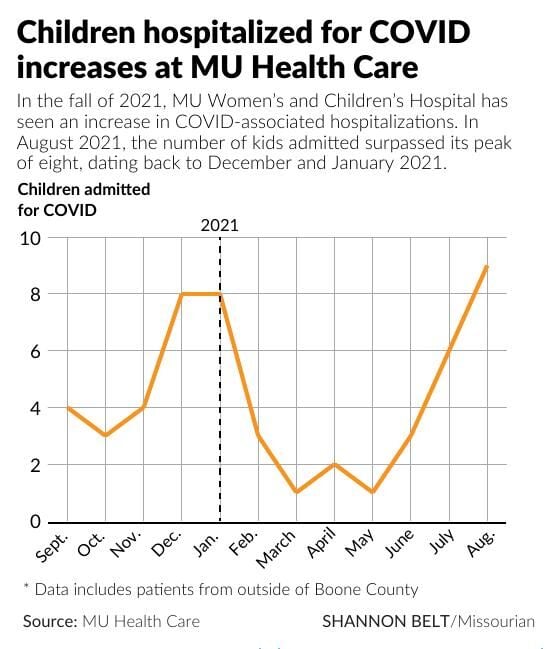 The same trend has been observed in the St. Louis and Kansas City areas, with St. Louis hitting 31 hospitalizations Sept. 1 and Children’s Mercy Hospital in Kansas City reaching capacity Aug. 31, according to The Associated Press.

The number of pediatric COVID cases that don’t require hospitalization has also increased in Boone County, according to Columbia/Boone County Health and Human Services.

“From my perspective, any COVID admission in a child is one too many,” said Amruta Padhye, an MU pediatric infectious disease specialist. “It’s just worrisome that we’re seeing this trend.” 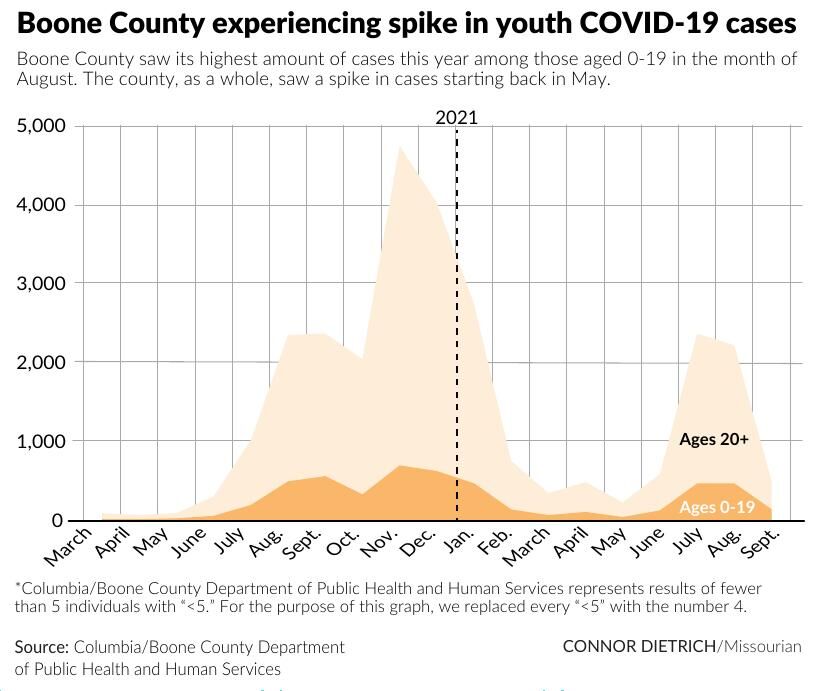 The Missouri Foundation for Health released a statement Aug. 24 “sounding the alarm” on behalf of pediatricians across the state. “The participating Missouri physicians represent various hospital systems and different regions of the state, but all agree the spike in pediatric COVID-19 cases is alarming and must be taken seriously,” the statement reads.

This pediatric surge has been observed nationally and coincides with increased circulation of the highly contagious delta variant, which began to spread rapidly in the U.S. in late June.

Padhye said she and most medical officials identify the delta variant as the main cause of the surge. She highlighted the impact of the back-to-school season and noted a parallel surge in Boone County adults as well.

“I think we are all bracing to find out what the next few weeks will bring us,” Padhye said. “When there is an increase in the number of COVID cases in the community, we will also pick up an increased number of cases in school-aged children. Whether it’s because they started school or not, that’s kind of hard to say right now.”

In response to the surge, the CDC is advising schools to encourage vaccination and to implement universal indoor masking for all students, staff, teachers and visitors regardless of vaccination status.

Columbia Public Schools has followed the CDC’s recommendation, extending its mask mandate at a school board meeting Sept. 13, but the district’s policy could be forced to change in the face of a lawsuit filed Aug. 24 by Missouri Attorney General Eric Schmitt. 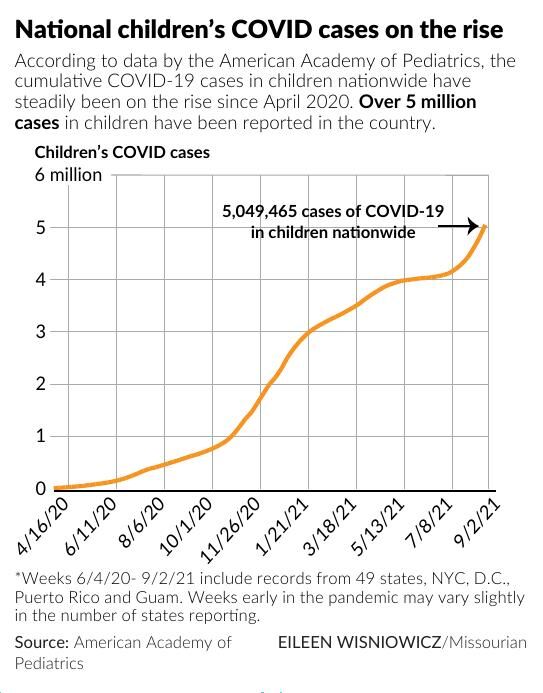 Padhye, on behalf of herself and her colleagues, said she is disheartened by the opposition to mask use and vaccination.

“We know that vaccination works, and we know that masks work, and we know that kids need to be in schools,” Padhye said. “I can tell you from my experience, the kids that I’ve seen in the hospital are either vaccine-eligible kids who didn’t get the vaccine, or they came from households where adults were unvaccinated. ... Since we don’t have a vaccine for young kids, less than 12 years of age, the only way to protect them and the immunocompromised kids as well, is to have adults around them be vaccinated.”

Columbia/Boone County Health and Human Services is continuing to monitor the surge and is in constant contact with school districts throughout the county, Assistant Director Scott Clardy said.

The Columbia City Council discussed reinstating a mask mandate as an emergency ordinance at its Aug. 9 meeting, but the mandate failed to pass in a 3-3 vote. Clardy said he is “not aware of any additional discussions occurring regarding any effort to bring a mask ordinance back at this time.”

Another respiratory virus on the rise

COVID isn’t the only virus on the rise in children as of late.

Typically observed in winter months, RSV is a common viral infection that usually causes mild, cold-like symptoms. Most people recover in a week or two, but RSV can be serious, especially for older adults and children younger than 1, for whom it is the leading cause of bronchiolitis and pneumonia.

As of Sept. 11, there was a five-week average of 82 RSV cases detected by rapid tests and 54 cases detected by polymerase chain reaction tests in Missouri, according to the CDC. That is compared to one case via rapid test and 20 cases via PCR test in the first week of June. 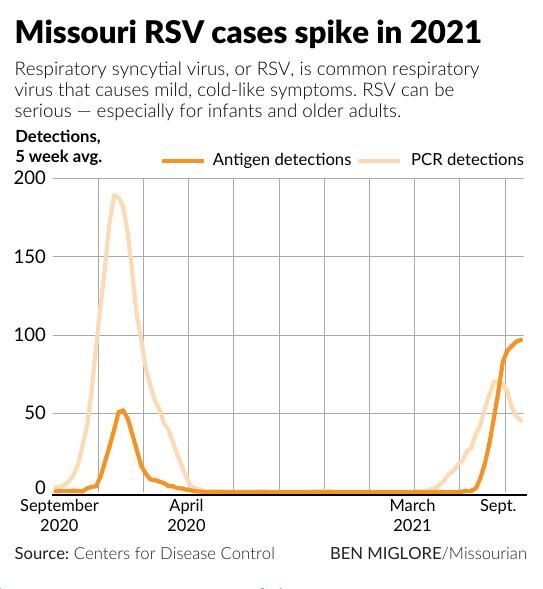 In early June, the CDC issued a health advisory to notify clinicians about the increase in RSV, particularly across parts of the southern U.S. The advisory encourages broader testing for RSV among patients who exhibit respiratory symptoms but test negative for COVID.

Medical professionals don’t know why this RSV surge is happening, but combined with COVID, Padhye said, it only heightens concern.

“With RSV already straining or, you know, putting us at high census, and on top of that, children being hospitalized with COVID, that’s not good news,” she said.

The general pediatric unit at Women’s and Children’s is at a bed count of 27 out of 55, and the pediatric ICU is at 12 out of 13, as of Friday. These patients can include COVID or RSV patients but are not limited to either.

Although MU Health Care tracks COVID-associated patients, it could not provide the number of RSV patients with the same ease, Maze said.

Boone County’s hospital status changed Monday from yellow to green for the first time since June 29, indicating that hospitals are functioning within their licensed bed capacity and are accepting patient referrals from other hospitals.

Pfizer vaccine proves effective in kids 5 to 11, but no appointments available yet

"It's hard to give parents any sort of timeline of what to expect," Health Department spokesperson Sara Humm said.