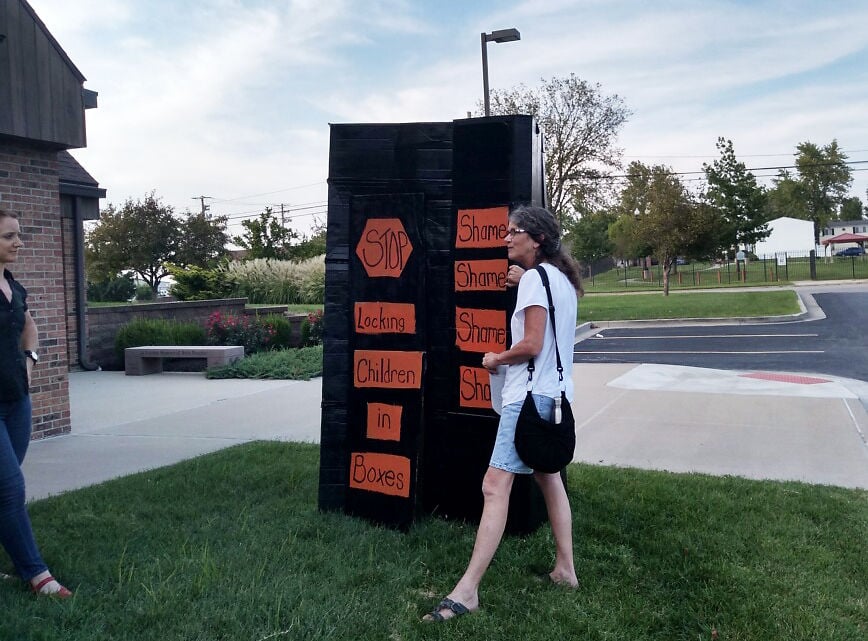 Carol Brown stands next to a box replicating a small room outside the first CPS board meeting of the 2019-20 school year on Monday at the Aslin Administration Building. Brown is a member of Race Matters, Friends and recently toured the Catapult Learning isolation rooms at the Center for Responsive Education. 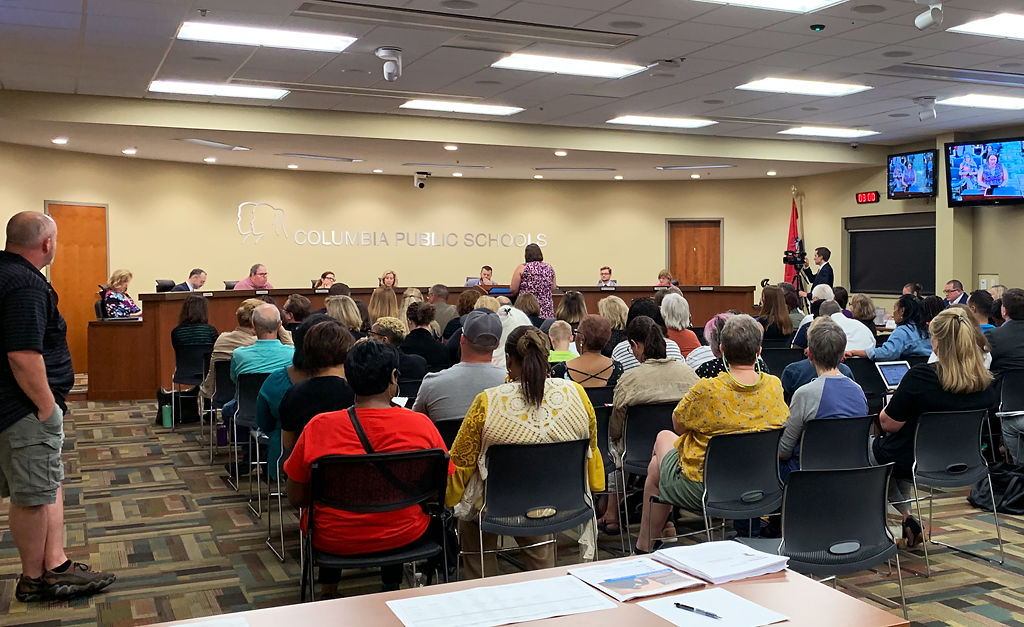 The first board meeting of the 2019-20 school year attracts a crowd on Monday at the Aslin Administration Building. Columbia Public School students, parents and staff participated in public discussion regarding the recording of teacher meetings.

Carol Brown stands next to a box replicating a small room outside the first CPS board meeting of the 2019-20 school year on Monday at the Aslin Administration Building. Brown is a member of Race Matters, Friends and recently toured the Catapult Learning isolation rooms at the Center for Responsive Education.

The first board meeting of the 2019-20 school year attracts a crowd on Monday at the Aslin Administration Building. Columbia Public School students, parents and staff participated in public discussion regarding the recording of teacher meetings.

This story has been updated to add comments from Rep. Chuck Basye, R-Rocheport.

Parents and advocates for students with special needs flooded the Columbia School Board’s September meeting, with many concerned about the district’s recording policy.

The board decided to form a working group to further discuss its audio and video recording policy, including concerns about training costs and maintaining recordings if the policy were to change. The school board has been reviewing the policy — which currently prohibits recording except in special circumstances — after parents of students with special needs pushed to be able to record their Individualized Education Program, or IEP, and 504 meetings.

Both IEP and 504 plans develop ways to help students meet their individual needs. A team made up of educators and the student’s parents meets at least once a year to discuss a student’s IEP.

Addressing worries that parents would use those recordings as grounds for a lawsuit, parent Kate Canterbury said, “I’ve got no time to sue anyone.” Rather, she said she hoped recordings of meetings could help her children take charge of their own education by letting them go back and listen to recordings.

“We say integrity and transparency are CPS values,” Canterbury said. “I can’t think of anything more transparent than a recording.”

Other members of the public said they had negative experiences in meetings and wished they had a record of comments so they could ask the district to improve.

Some who spoke pointed out that parents of children with special needs may have special needs themselves that make it difficult to take notes while also processing the meeting. One father, Brandon Salladay, said he had to hire a parents’ advocate before the district would made an exception for him to record.

One reference point of the discussion was anonymous feedback that teachers provided in response to a district survey about a possible change to the policy. Superintendent Peter Stiepleman said that of the nearly 370 educators who responded to that survey, about two-thirds were opposed to recording.

Many expressed concerns that allowing recording would make conversation uncomfortable, overly formal, restricted, less creative or adversarial, all to the detriment of students. Others said recordings would be redundant because parents already receive written plans.

Concerns that recordings could expose confidential student information or be taken out of context came up multiple times in the survey feedback.

“Sensitive material is discussed in those meetings and people need to feel comfortable speaking freely about certain situations,” said one response.

A few teachers said they would quit, refuse to attend meetings or limit their participation to reading the written plan aloud if recording were allowed.

Some teachers who responded to the survey were sympathetic to parents who want to record meetings, with many saying they were in favor of the policy.

“There should never be ANY reason to not allow recording. It only increases accountability and reinforces professionalism,” one teacher wrote.

Giving “parents info they seek and allowing them to process and rehear the complicated jargon of IEPs and 504s is important,” another wrote.

Some teachers seemed unsure whether parents or school personnel would create and maintain control of the recordings and whether they would be made in all cases or only when requested. The working group would address these things.

In Missouri, only one of the parties being recorded has to consent for that recording to be legal — meaning it wouldn’t be against state law for parents to secretly record meetings with teachers. During her presentation to the board, a representative of Missouri Disability Empowerment emphasized that it was the board’s responsibility to work out the details of a policy that would allow parents to exercise that right. Currently, she said, teachers have to stop a meeting if they realize a parent is recording.

Rep. Chuck Basye, R-Rocheport, urged the board to allow parents to record meetings with teachers. He also said at the meeting he plans to file a bill in the next session to make it a state-wide standard.

“Going back to transparency, I think that’s a good policy to back up,” Basye said. “I’d hope the Columbia School Board would set an example for the state.”

This story has been updated to add comments from Rep. Chuck Basye, R-Rocheport.

A policy committee for Columbia Public Schools met to discuss possible changes in the district's policies on parents recording meetings with teachers and on school officials use of restraint on children. It's not clear when either issue will be ready for a final vote by the school board.