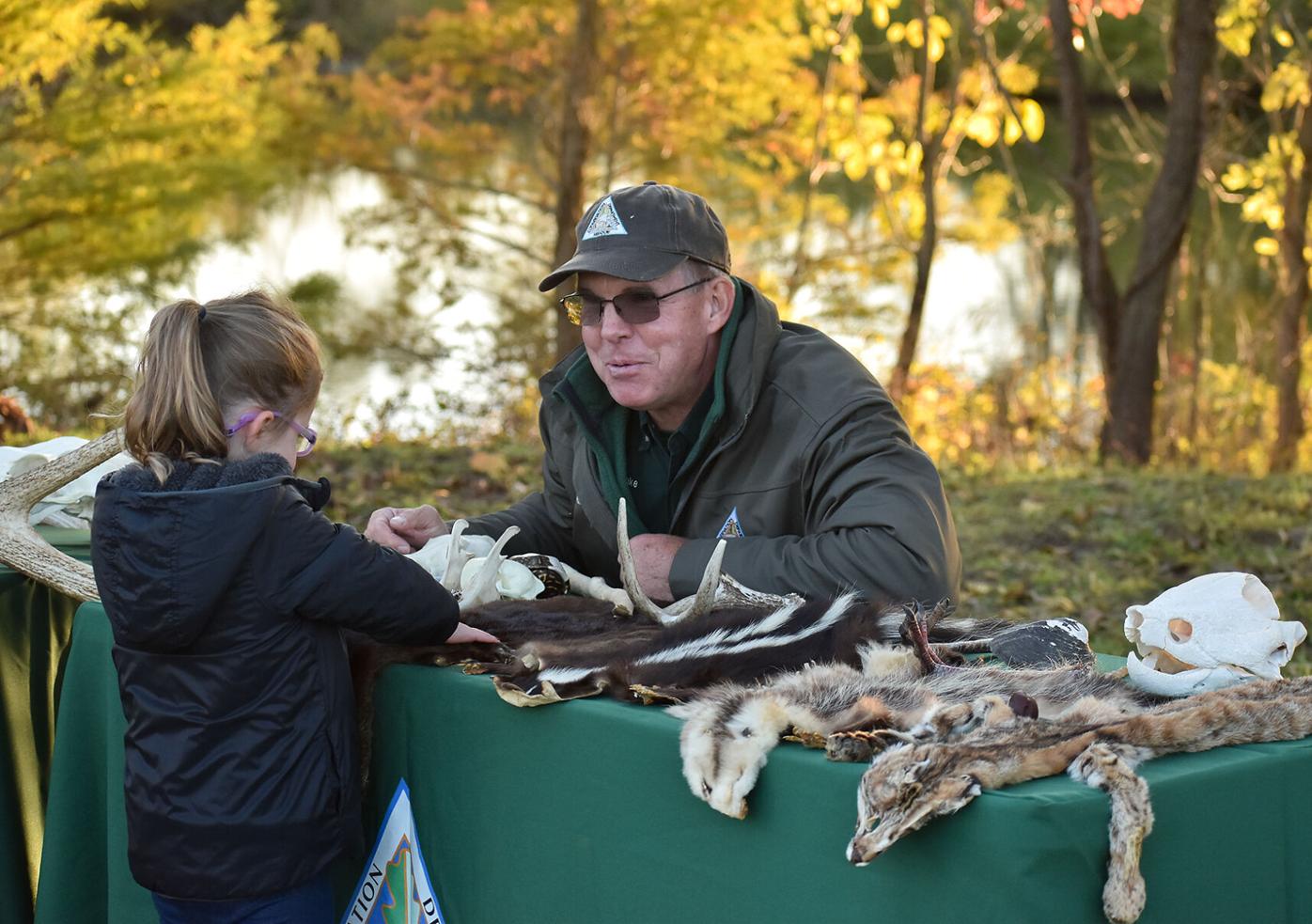 Dwight Warnke shows Clara Cole, 4, animal skeletons and pelts from the Missouri Department of Conservation on Thursday near Columbia. Warnke’s table displayed some of what will be incorporated into the Boone County Nature School curriculum. 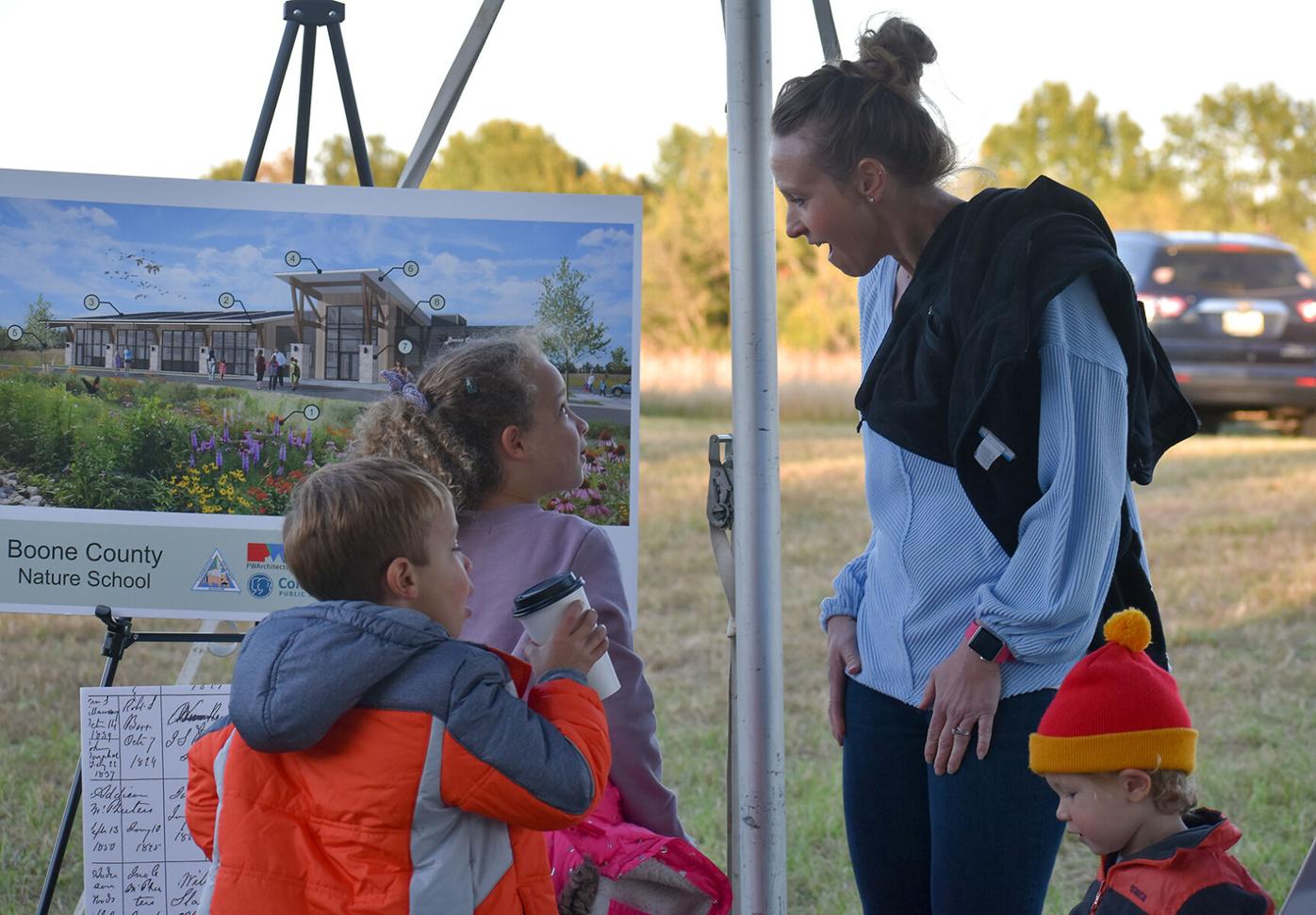 Elizabeth Simmons looks at a map with her children Noah, 5, Aubree, 8, and Matthew, 1, on Thursday. The photo details features of the new Boone County Nature School and a map of the Columbia area from 1853.

Elizabeth Simmons looks at a map with her children 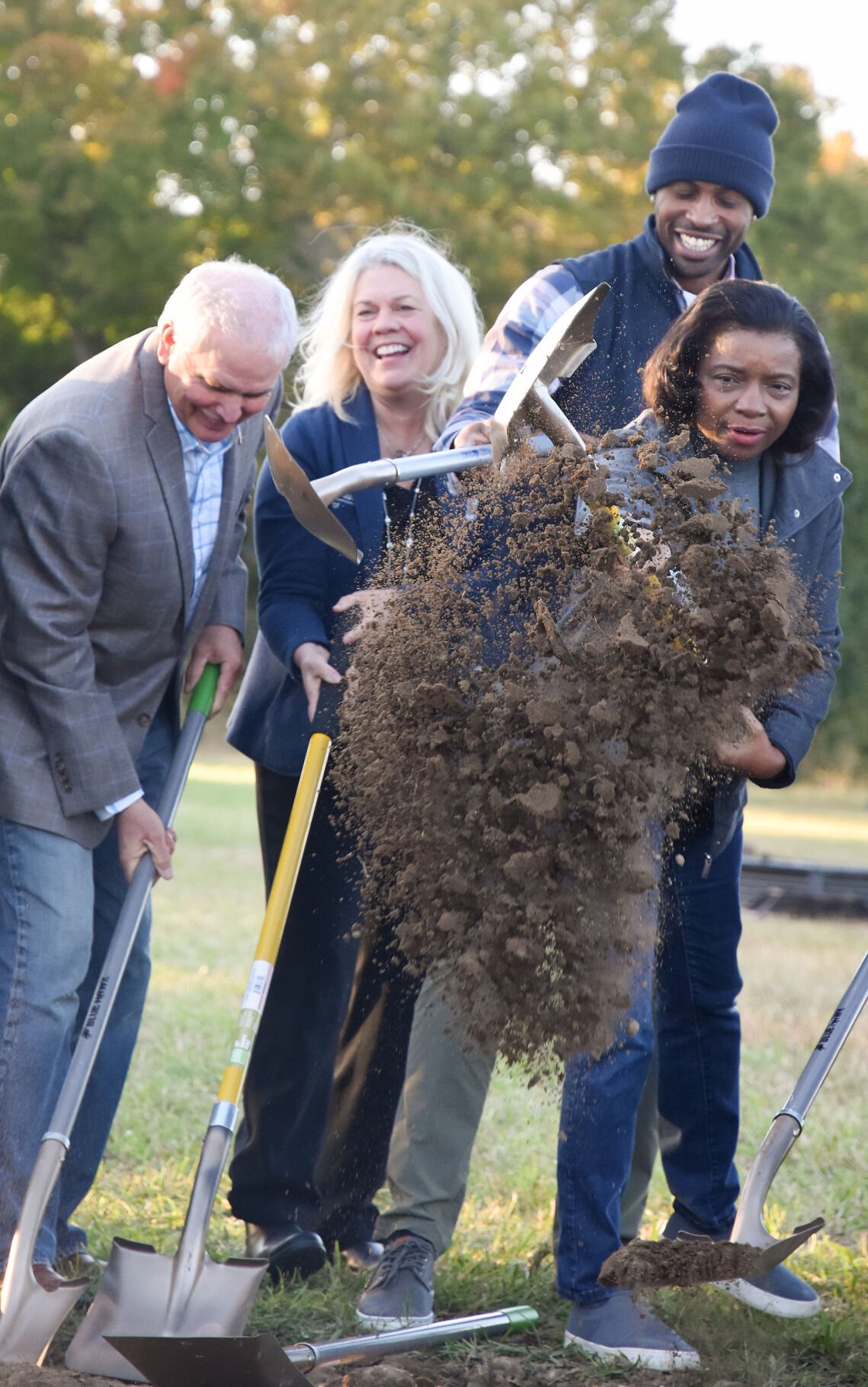 Della Streaty-Wilhoit, vice president of the Columbia Public School Board, right, upturns dirt with her shovel Thursday. Following the ribbon cutting, this groundbreaking symbolized the unveiling of the Boone County Nature School. 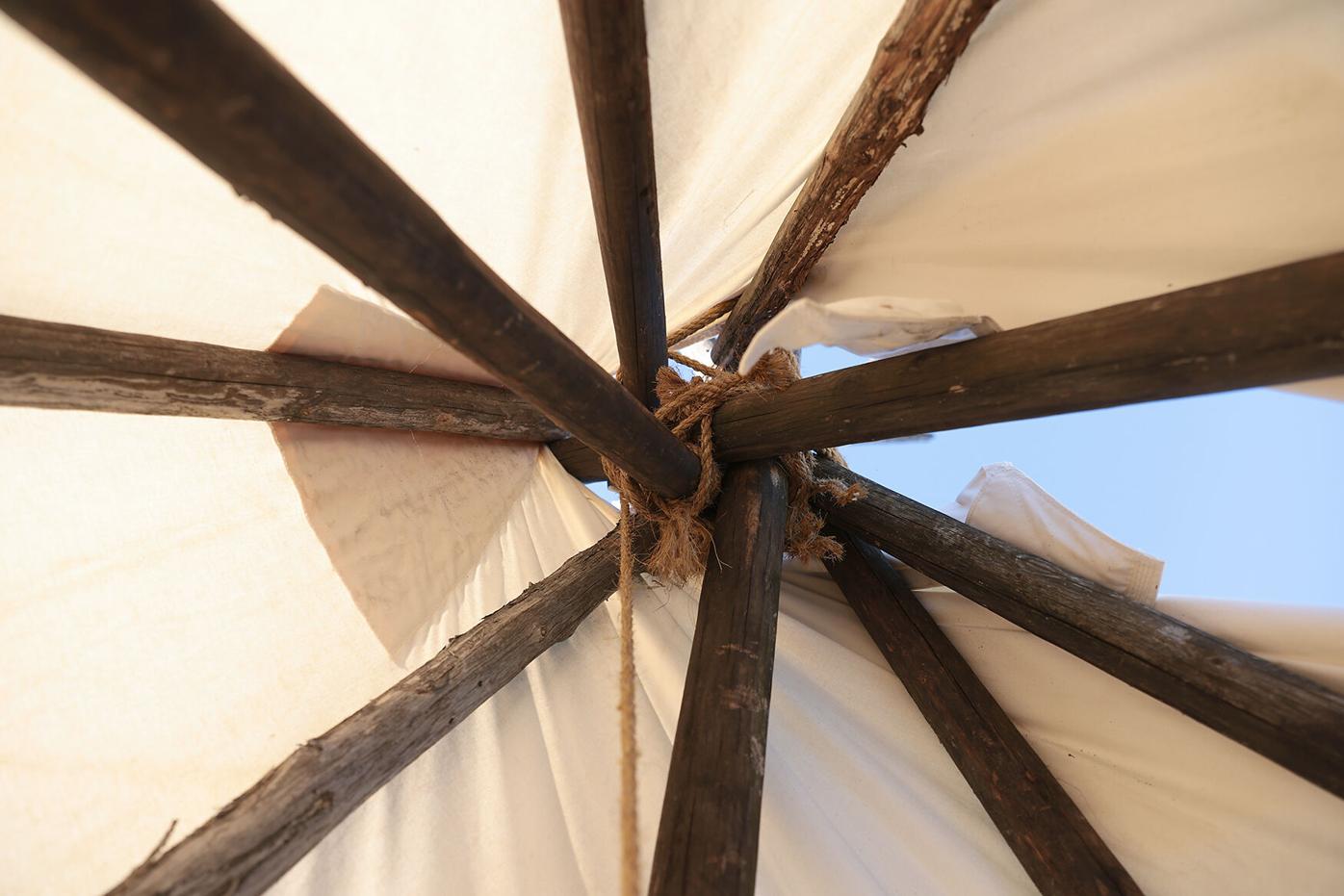 Knots hold together the top of a tepee Monday at the Boone County Nature School south of Columbia. The tepee is smaller than its traditional counterparts. 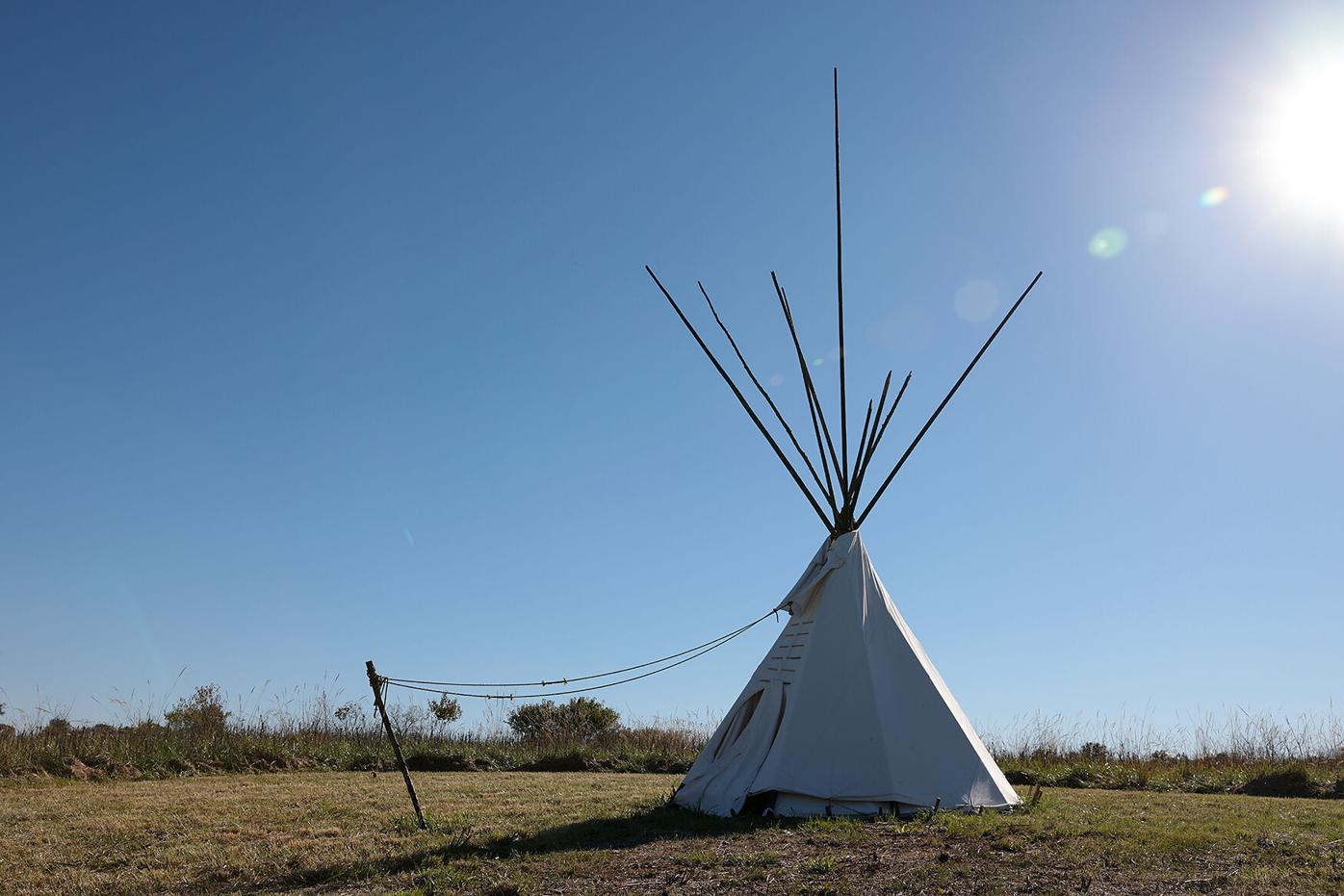 A tepee stands across the pond from the student tents Monday at the Boone County Nature School. The structure is intended to give students the ability to have more hands-on experience with learning the history of Indigenous peoples. 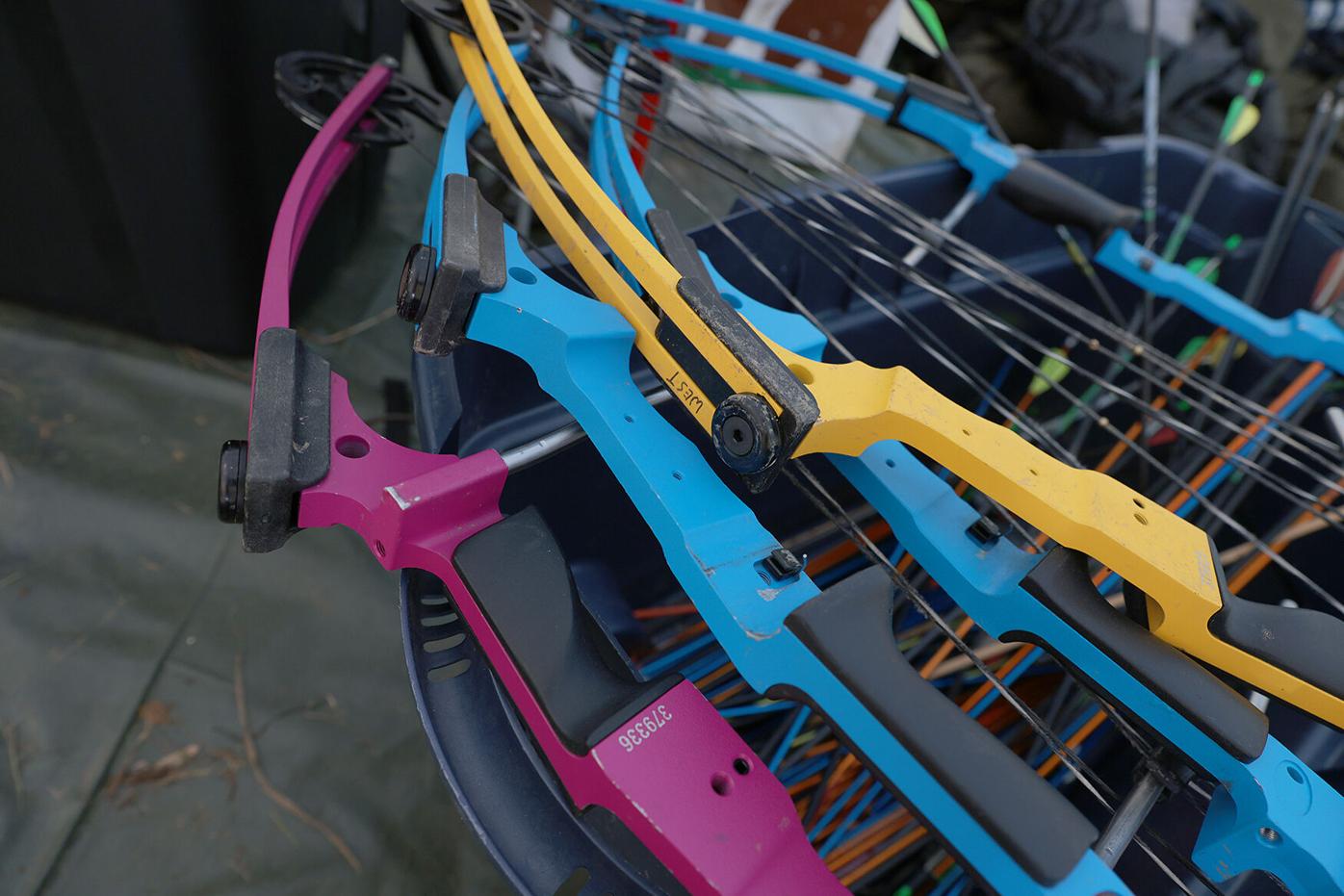 Bows sit inside a tent being used for temporary storage Monday at the Boone County Nature School south of Columbia. Archery is one of the activities offered for sixth and seventh graders at the school.

The ponds are stocked with hundreds of catfish, bluegill and bass. The trails are marked, and the tents are up. All that is needed is the building for the new Boone County Nature School south of Columbia.

Yearwood was among those who gathered late Thursday afternoon to celebrate the completion of the first phase of development and mark the start of the second phase for the nature school.

The roughly 8,000-square-foot school building is set to be complete in 2024, but the program will start in earnest next fall for Boone County's 2,000 or so fifth graders.

"The nature school will provide many educational opportunities for children in all six Boone County school districts," Yearwood said.

Since the start of last summer, students have visited the 206 acres next to the Three Creeks Conservation Area to camp, hike, fish, band birds and more. Starting next school year, every fifth grader will spend seven school days at the nature school as well as attend a camping trip.

Using "place-based" education, students will be taught content as it relates to Columbia and Boone County.

"Place-based means we study the exact same standards the state or nation or school district says we’re supposed to teach, but we teach them in the lens of our community," said Mike Szydlowski, the science coordinator for Columbia Public Schools.

Szydlowski was recognized with the Master Conservationist Award at the ribbon-cutting Thursday evening.

Why fifth graders? Szydlowski said they chose to do the program with that age group because they are old enough to start engaging in higher-level thinking but not too old to have made up their minds about what they want to do in life.

"Both for developmental and logistical purposes, we thought (fifth grade) was a good one," he said.

Students in other grades can use the nature school for day trips, and middle school science camps will be held there.

Nature schools are popping up across the U.S. The Good Earth, a nature school in Solon, Iowa, for preschool through third grade, has been open for four years. Children learn about the earth, ecosystems and conservation — but also math and writing.

"The reason I know it is successful is because the kids are happy and excited to come to school every day," said Brydie Criswell, director and educator. "I’ve never had any kid not want to come to school."

The idea for a small nature school in Columbia was born almost a decade ago. After taking a trip to the Wonders of the Ozarks Learning Facility in Springfield, Missouri, in 2013, Szydlowski and then-Columbia schools Superintendent Peter Stiepleman approached the Department of Natural Resources about building a nature school in Rock Bridge Memorial State Park.

"They were interested," Stiepleman said. "We started working on designs of a school, and they put funding into the state budget to help us pay for the building."

But in the midst of budgeting issues, the funding was withheld, and the dream project fell through.

Then, two years ago, Sara Parker Pauley, director of the Missouri Department of Conservation, approached Stiepleman and said she wanted to help make the school happen. Pauley and Stiepleman met with Hank Waters and Vicki Russell, former Columbia Daily Tribune publishers, and they donated the property.

After searching for the perfect location for the nature school, Pauley said, "It's all about fate and maybe a glass of wine or two."

Russell said donating the land for the nature school was a lifelong dream. "We're fortunate we were able to do this," she said. "The exciting part for us is thinking about the future."

A walk around the land Monday showed the early flush of fall colors. Sun-stained grass swayed around dozens of green tents. By the pond were silver canoes ready for fishing adventures. Stiepleman said they're pretty sure a beaver lives there, based on carvings in the brush by the pond.

Stiepleman said that when the district sought feedback from families about how federal COVID-19 relief money should be spent, outdoor learning had a lot of support.

"We don't want education to be just the confines or four walls of a classroom," said Stiepleman, who donated $25,000 for the project last month.

The school district has contributed $2 million to the nature school, the Conservation Department has put in $1 million and acquired all the land and the rest of the project is being paid for by private donors and fundraising. The total enterprise is expected to cost about $4.5 million.

The property also includes a "food forest," which will develop over the next decade and beyond. Growing plants including nut trees, blackberries and elderberries, students will be able to make their own food and drinks from the items they grow there.

While shopping for shovels for the ribbon-cutting, Szydlowski told Stiepleman a story about being approached by a student who had camped at the nature school. The student had been surprised — he didn't think school could be that much fun.

"That tells me what we’re doing is absolutely the right thing to do," Stiepleman said. "That’s what excites me the most."

The school building with four classrooms and lab space will be near the Three Creeks Conservation Area.