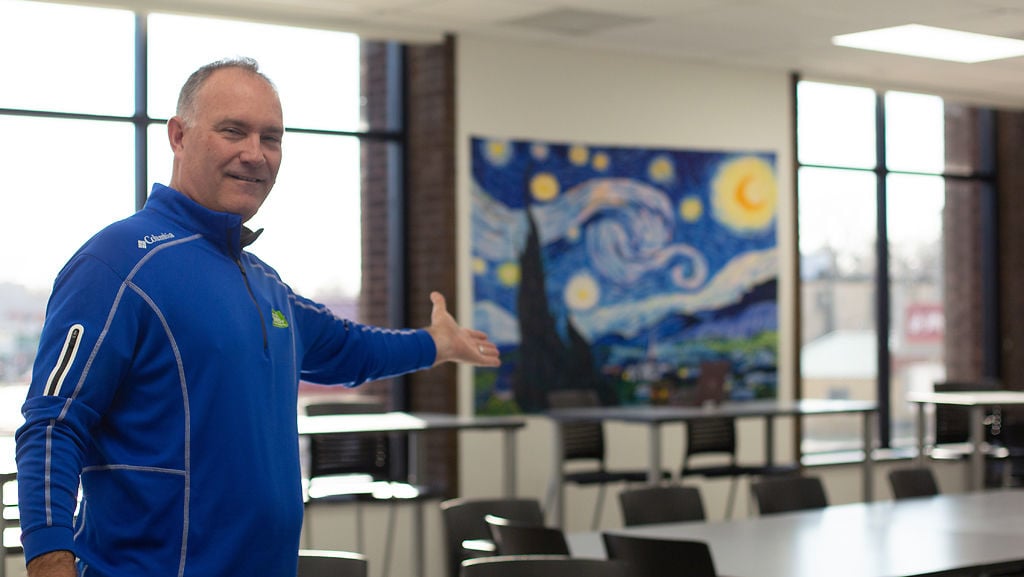 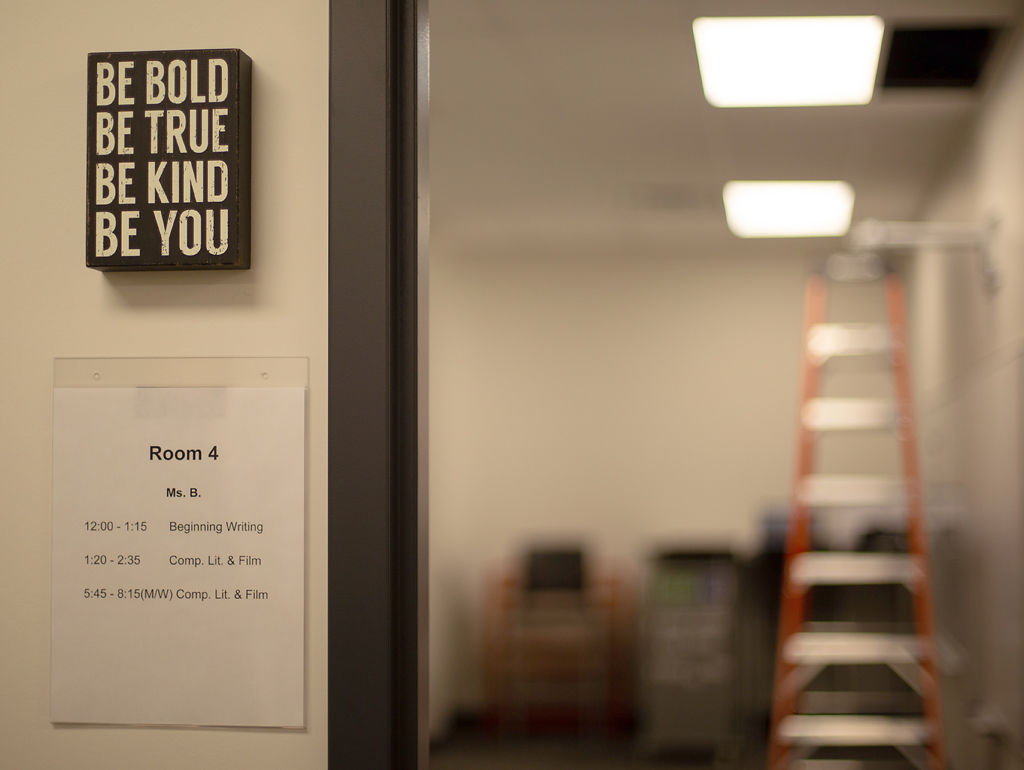 A sign hangs outside the English classroom at the Excel Center and reads: "Be bold, be true, be kind, be you." Sue Burns, one of the school’s English teachers, said these eight words are her favorite part of this classroom. 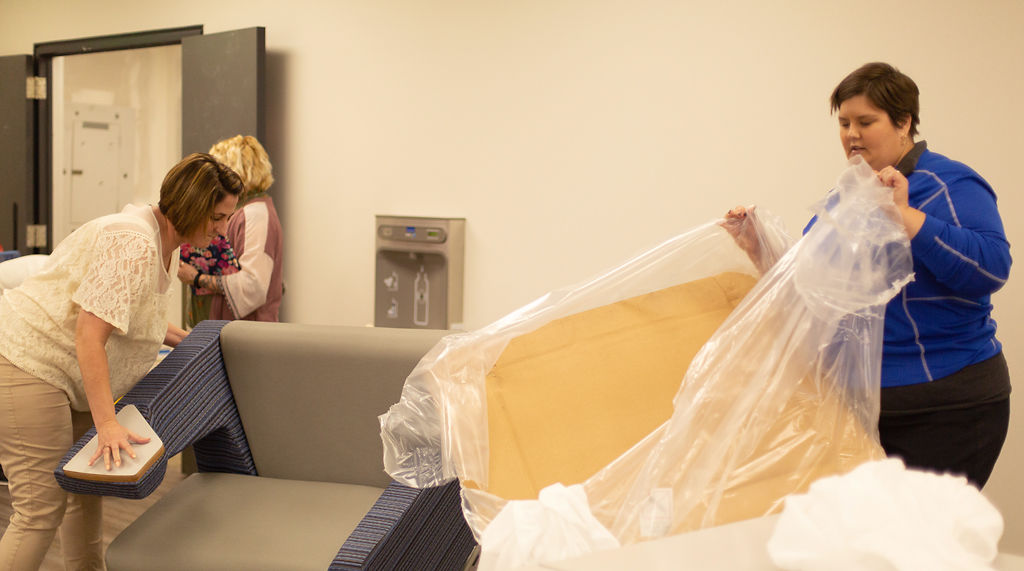 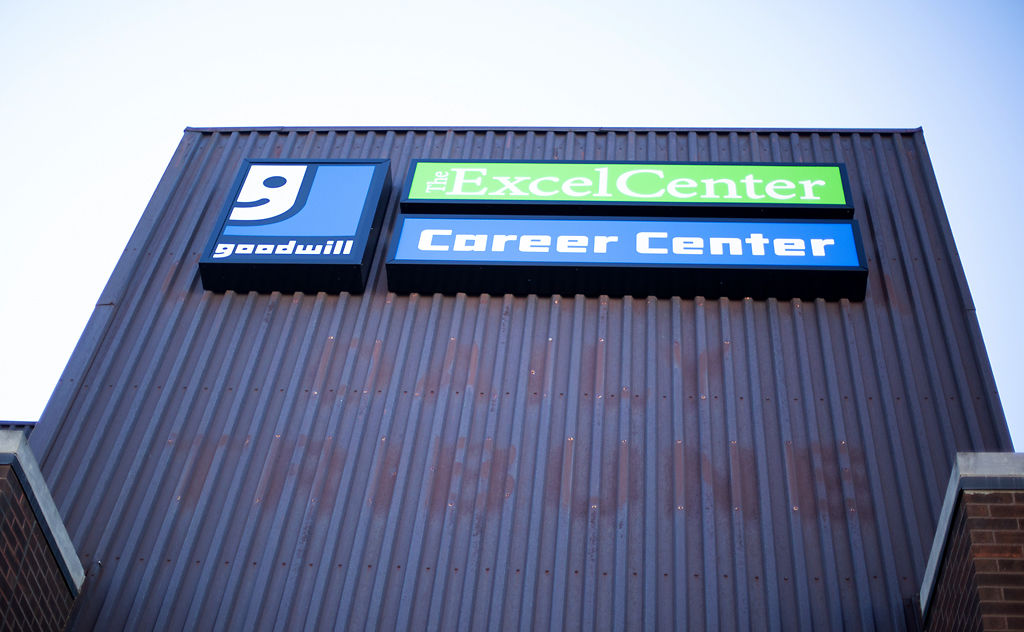 Goodwill Excel Center’s sign is displayed on its building Thursday. The new space is in the former Columbia Daily Tribune building.

A sign hangs outside the English classroom at the Excel Center and reads: "Be bold, be true, be kind, be you." Sue Burns, one of the school’s English teachers, said these eight words are her favorite part of this classroom.

Goodwill Excel Center’s sign is displayed on its building Thursday. The new space is in the former Columbia Daily Tribune building.

A free adult high school will kick off its second term Monday with triple the space in its new location in the former Columbia Daily Tribune building.

The school, Goodwill Excel Center, will hold an open house from 8:15 a.m. to 5 p.m. Monday to showcase the new space and provide tours for interested students and families. Executives of MERS Missouri Goodwill Industries, based in St. Louis, will participate in a ribbon cutting ceremony at 8:15 a.m.

The school opened in October with five temporary classrooms in a building next to the new location. But now, in the space the Tribune vacated, they have six brand new and full-size classrooms, three temporary classrooms for future expansion and unexpected events, a gymnasium, daycare rooms for both babies and older children, a cafeteria with TV and two vendors.

“For the first term, we were very tight. We had several students in a small area,” school Director Mike Reynolds said. “Now each one of our classrooms is considered a full-size classroom. We can accommodate 30-plus students and still have plenty of space.”

A larger daycare room provides young children of students with cradles, baby chairs and various kinds of toys. There are also desks and school supplies. The space also allows parents to have more room with their children for lunchtime, Reynolds said.

More class options will be provided as well.

The new class, called dinner-hour class — from 4:15 p.m. to 5:30 p.m. — will give both daytime and nighttime students a chance to take more classes, Reynolds said. Previously night students only had two options for classes — one class Monday and Wednesday evenings and the other Tuesday and Thursday evenings. The dinner-hour class provides a third class they can join.

The school had 122 students for the first term, which was below their expectation, he said. But nearly 80 more students registered after the first-term registration deadline.

“When we started, our goal was to have 150 students or more. We were a little bit short of that with our first term,” Reynolds said. “But we’ve had almost 80 students added on to that number. So we’re ahead of the idea of having 150, but now we want 200.”

Reynolds said their goal is not only a specific number of students but also to expand the enrollment every eight weeks.

“We try as much as we can to ensure that our students are seeing the practical applications of what they’re learning,” Hirsch said.

For math class, students are taught applied math with physics and geometry formulas and calculation, she said.

“They do like a mugshot outline and all of the physical stuff somewhere. And then the students do the analysis of the scene and the analysis and the blood,” she said. “Throughout the course, students analyze the scene and evidence using biology content and skills.”

For the first term, the school focused more on getting everybody acclimated to coming back to school and basic academic knowledge, Reynolds said.

Sue Burns, one of the school’s English teachers, said she has already seen the potential of students and they are no longer as afraid of writing as they were on their first day.

She said she was impressed on their huge steps forward.

“Just because they need just a little bit more time and support, they’ve made huge progress, and by the time of the next session they should be able to move on,” she said.

The second term will continue to focus more on the academic side, but in the future, the school will focus on career paths.

“We want to move them through towards their high school diploma. But as they’re moving through, we also want to get them lined up for an IRC: industry recognized credential,” he said.

A course called cornerstone, which is a combination of technology classes and career paths, is provided as an elective “to help students be able to operate technology and then start thinking about what career path they want to follow,” Reynolds said.

Reynolds said the school will also expand its partnership with academic institutions and companies to provide students internship and academic opportunities without charge.

The Goodwill Excel Center is a free public high school where those over 21 years old can earn a high school diploma after meeting a 24-credit requirement, said the school's director, Mike Reynolds. It will also feature a cafeteria and free, on-site child care.