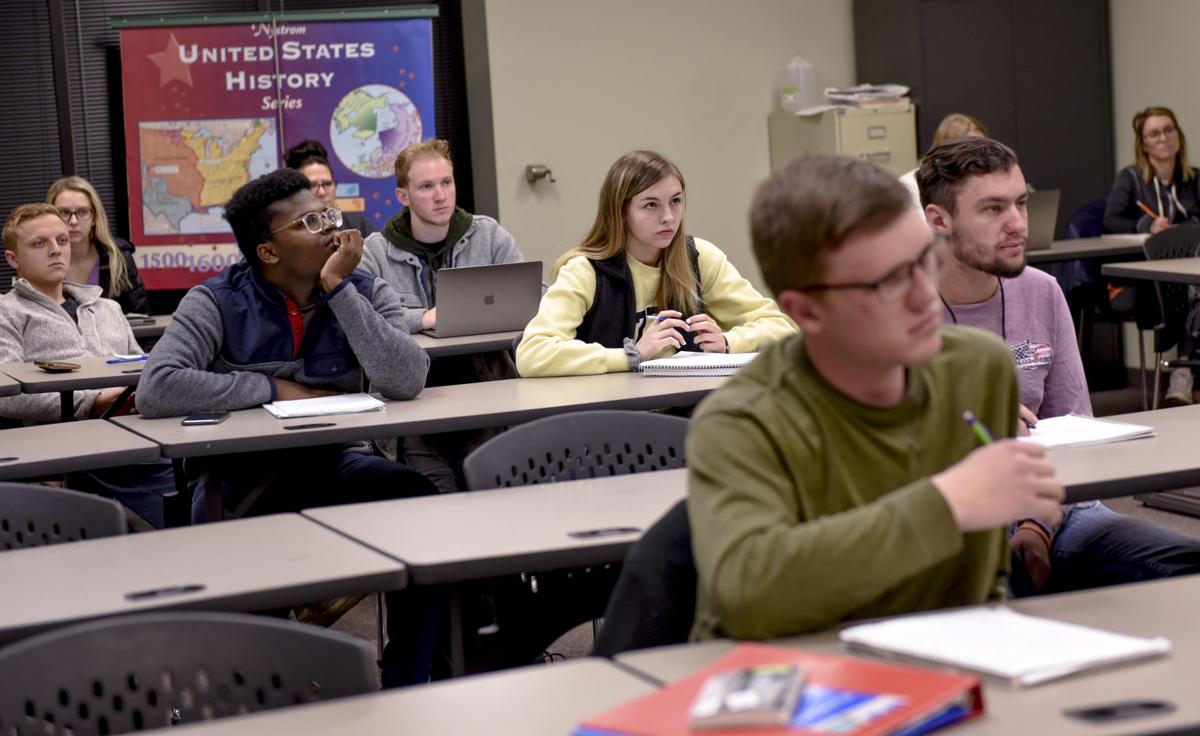 MACC students listen to their professor during class Monday at the Moberly Area Community College Columbia campus. This class was about religion and compares religions from around the world. 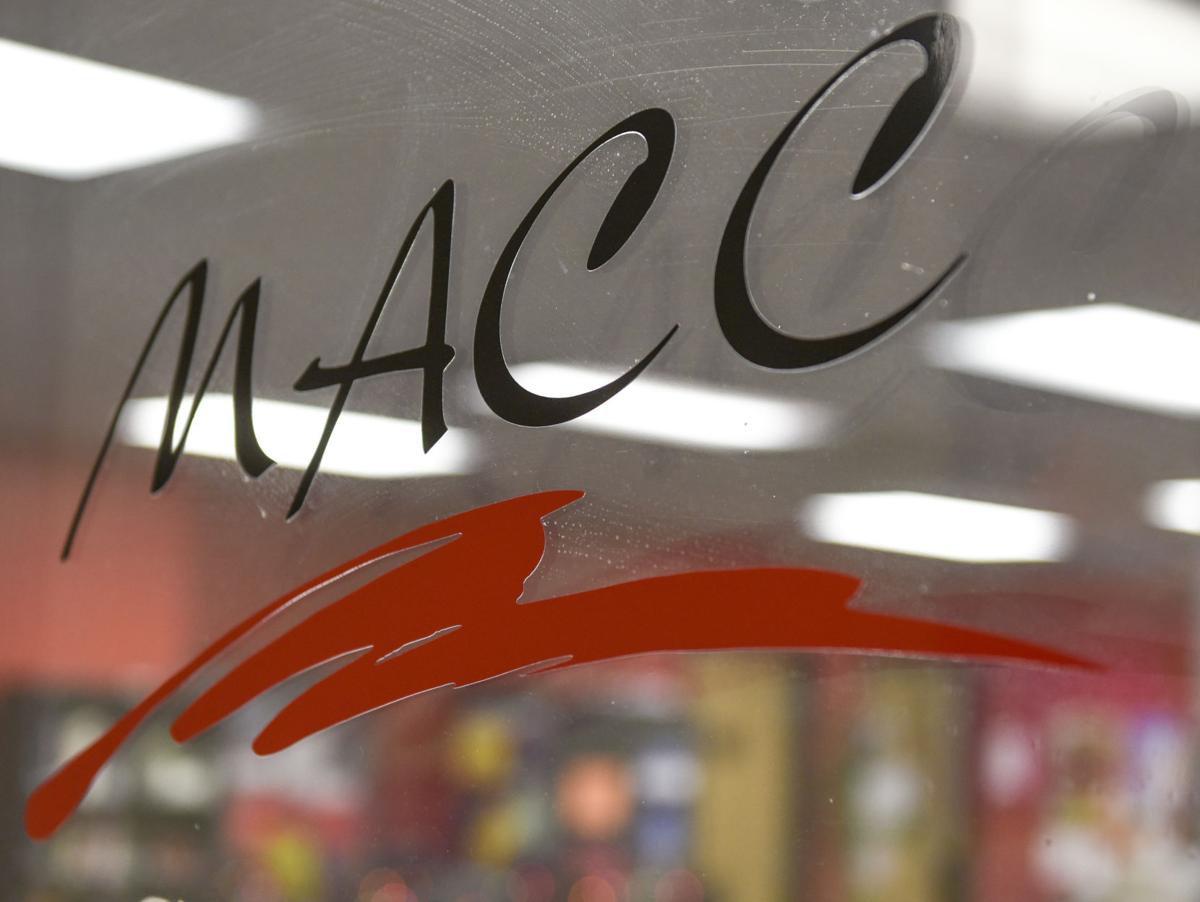 The Moberly Area Community College logo is displayed on a door Monday at the MACC Columbia campus. The new program with MACC and Columbia Public Schools will allow high school students to attend MACC classes for half the day and return to their high school for the other half. 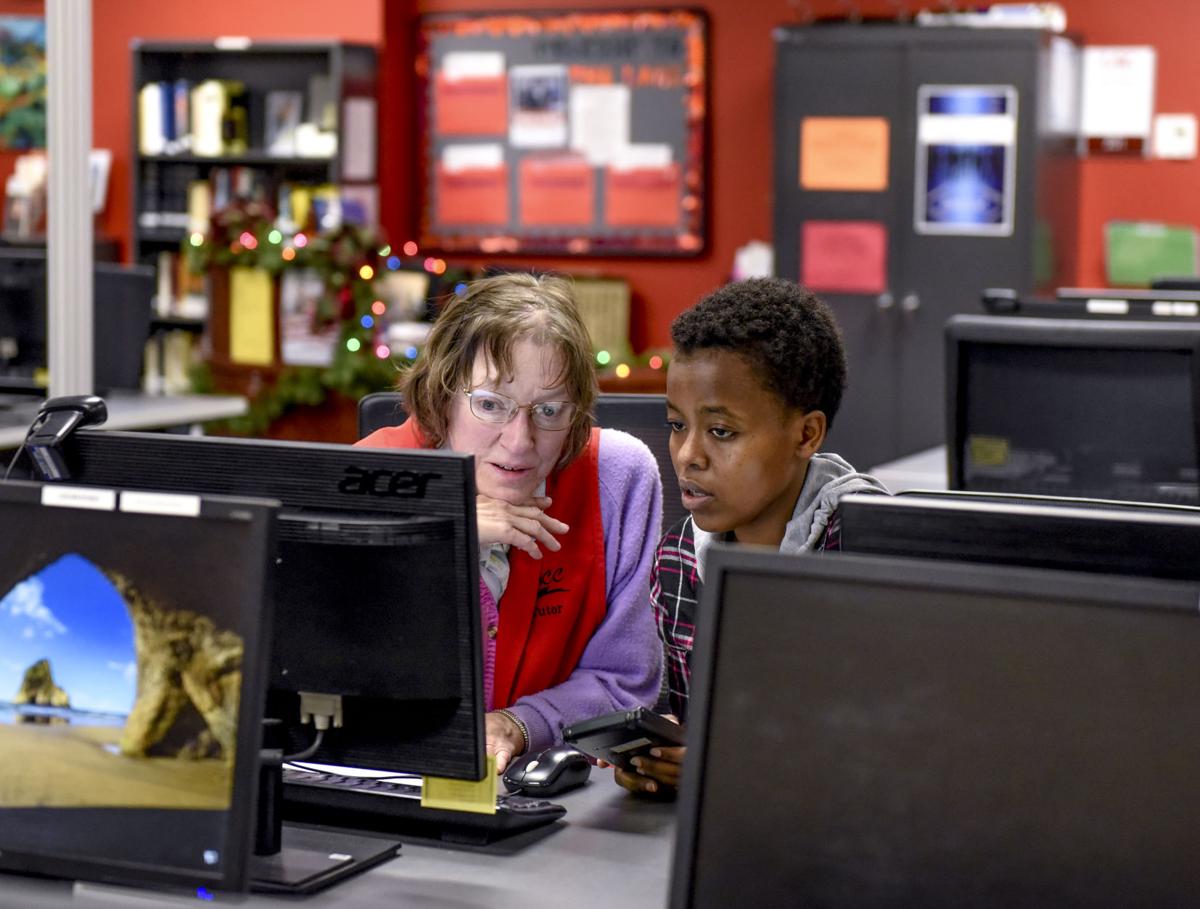 From left, Janet McGetrick and Esther Nyabagigi look at a computer screen Monday at the Moberly Area Community College Columbia campus. McGetrick is a tutor in the Library and Academic Resource Center at MACC. 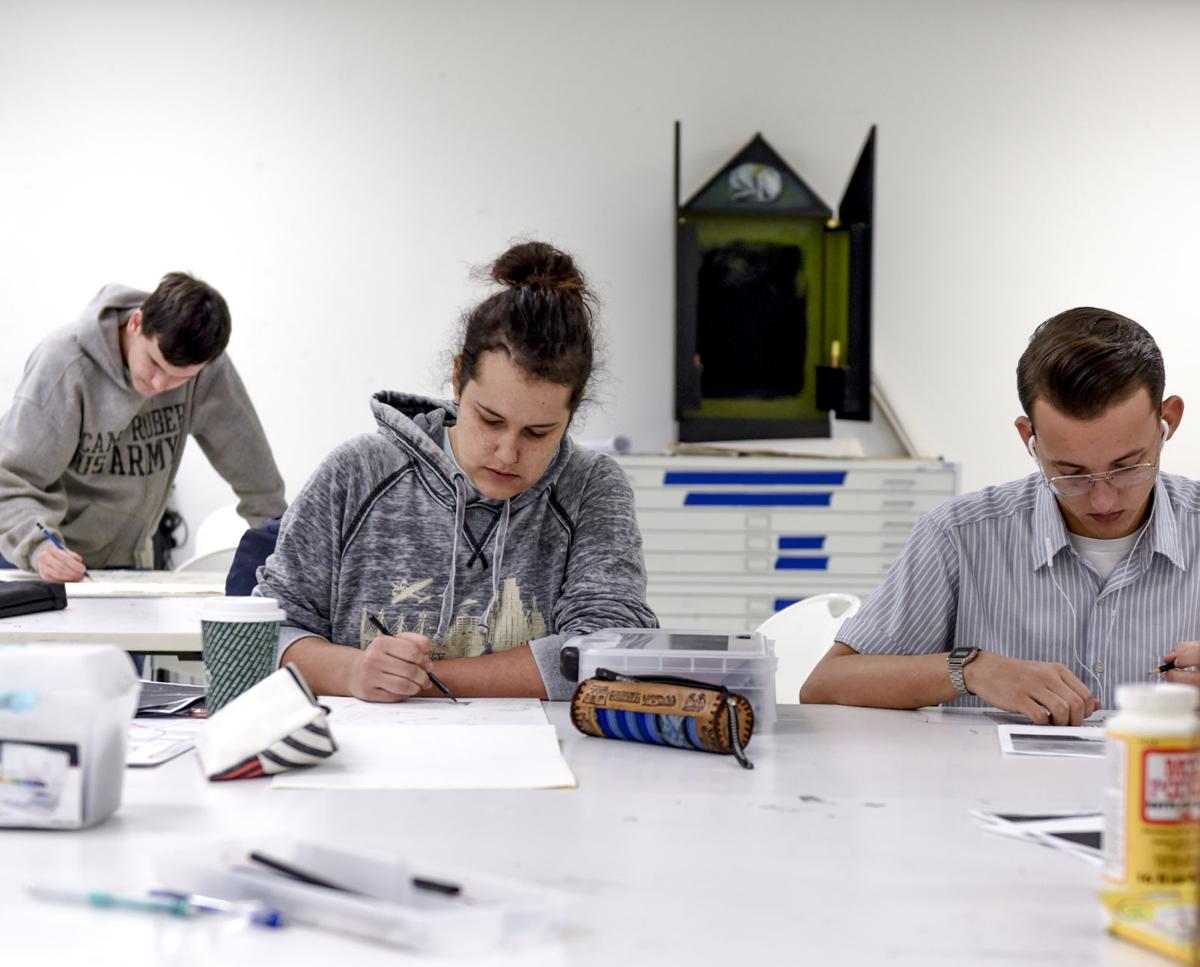 From left, Nick Melchert, Abby Deason and Brett Henry work during art class Monday at the Moberly Area Community College Columbia campus. Students are working on their final projects in class this week. A key element of the new program allows students to continue to be involved across both campuses. 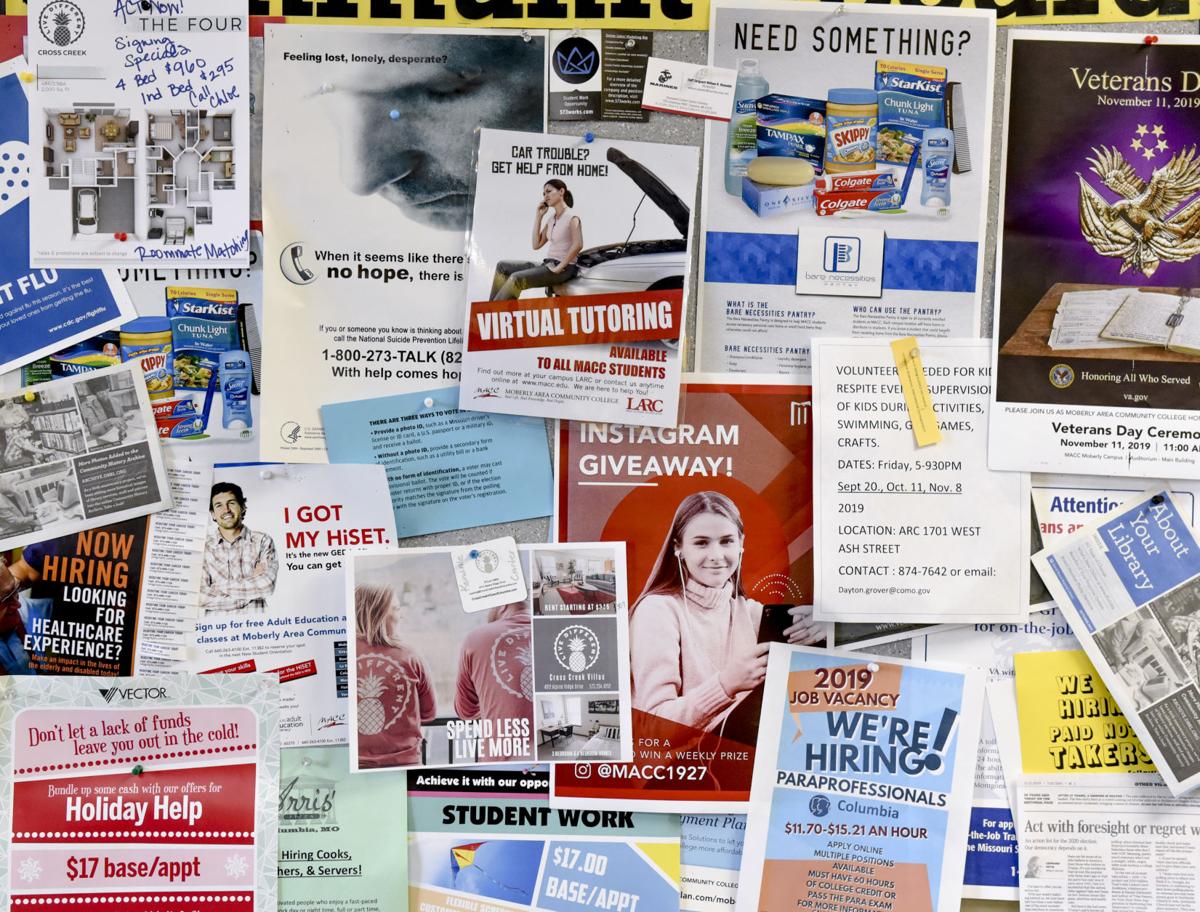 Announcements are posted on a community board Monday at the Moberly Area Community College Columbia campus. The new partnership with MACC and Columbia Public Schools will allow high school students to enter the workforce right away or begin college with two years of credit already complete. 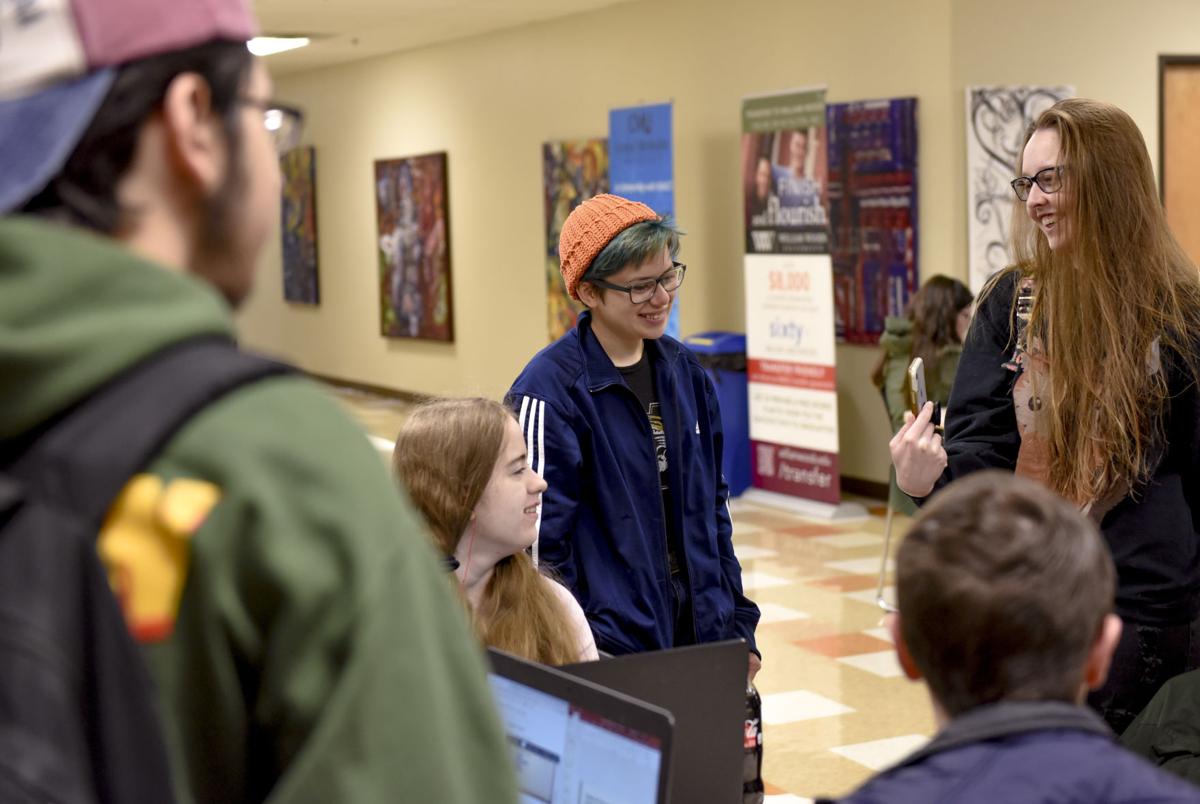 From left, Nikki Shadwick, Miranda Brangenberg and Tiara Swanson socialize before class Monday at the Moberly Area Community College Columbia campus. “It’s where the cool kids sit,” Brangenberg says of the table where her friends congregate. 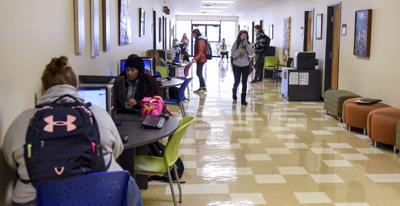 Beginning in August, Columbia public high school students will have the option to graduate with a high school diploma and an associate degree at the same time. That could allow them to head straight into the workforce or to enter college with two years of credit complete — and no debt.

The program represents an expansion of existing dual-enrollment programs between the district and MACC.

Reporters for the Columbia Missourian, KBIA and KOMU have been talking to officials behind the program and some of the students who may take advantage of it about how it will work and why it’s being launched.

Listen to the interview with program organizers on KBIA

“I really think it’s about pathways: providing new pathways for our students to get an education, to move to a four-year institution or to get to the workforce,” MACC President Jeff Lashley said. “What we’re excited about is more students coming out of our college with less debt. And then we also hope and believe that we’re going to get some students who will participate in this program who maybe would have never attempted college otherwise.”

‘They can be in the marching band’

Columbia Public School Superintendent Peter Stiepleman said high school juniors and seniors will be able to attend college courses at MACC’s Columbia campus for half the day and return to their high school for the other half. That means that while they’re earning college credits, they can still have all the fun of being in high school.

Watch the story on KOMU

“We’re a working-class community, whether you realize it or not,” he said. “When you have almost 1 in every 2 kids participating in free, reduced lunch, this could be the absolute life-changing moment, to be able to attend a community college, get two years done and then finish out the rest of your college career.”

To qualify for the program, students will need a grade-point average of at least 2.75 and a good record of attendance and discipline, Stiepleman said. He added that a college admissions test score criteria will also be set. For rising Columbia public school juniors who have not taken the ACT yet, MACC will offer ACCUPLACER, a college placement test that assesses math, reading and writing skills.

The district’s goal for fall enrollment is 50 students, Stiepleman said. He said the district will pay its students’ tuition at MACC ... and predicted that it will result in some savings.

The district spends about $12,000 per student on average to provide schooling and resources, Stiepleman said, adding, “We’re going to be spending significantly less than that for students to be able to attend college” at MACC.

The idea for the partnership stemmed from an annual trip the Columbia Chamber of Commerce organizes for local officials to tour cities of similar sizes. Last year, representatives of the Columbia public schools visited Ann Arbor, Michigan, and its school district, where high school juniors and seniors attend Washtenaw County Community College and graduate high school with their associate degree or an industry-recognized credential.

‘Why haven’t we been doing this?’

“We went to Ann Arbor, and we saw this, and we thought, ‘Why haven’t we been doing this?’” said Jonathan Sessions, Columbia School Board vice president.

Noting that the school-age population in Columbia continues to grow and that the district high schools are expected to be at capacity by 2030, Sessions said the program may put off the need to build another school.

Students are already excited about the program.

“It seems just, like, almost unreal that I can get started that early, because anything that I can be doing as early as possible to help out my future seems like something I definitely want to do,” Savanah Godier, a Rock Bridge sophomore, told KOMU’s Daniel Perreault. “And it’s really nice to know that there’s opportunities that I can take to lower that expense.”

Asher and Jonas Ferguson, twins who are sophomores at Battle High School, plan to pursue the new program next fall.

Jonas said the program will allow students to save time and money — and provide a more reliable alternative to the Advanced Placement classes many students take in hopes of earning college credit while still in high school.

“What I’ve heard from our teachers is that a lot of times with (Advanced Placement) credit, students will work really hard and schools won’t accept their scores,” Jonas said. “And so, this associate degree will be an acceptable-everywhere equivalent.”

Besides lessening student debt and giving students a jump-start on their academic careers, Lashley hopes the program will reduce the intimidation factor of going to college.

A MACC alumnus himself, Lashley said he still remembers feeling out of place until one day he passed a psychology instructor who addressed him by his first name. Suddenly, the MACC president said, “part of that intimidation was gone.”

“I think those small kinds of touches that happen can go a long way with helping our students feel like they’re at a place where they’re supposed to be and that they’re going to be successful,” Lashley said.

The students enrolling to get two diplomas at once will get plenty of support, Stiepleman said. They’ll have access to counselors at both their high schools and MACC.

Stiepleman said students will receive the new program course catalog by early January and will begin registering in January and early February.

Kristi Shinn, CPS director of curriculum and instruction, said MACC and CPS are considering an information night in January so parents can ask questions and meet staff.

Organizers of the project agree it’s all about giving more students access to opportunity.

“It’s collaborations like this between Columbia Public Schools and Moberly Area Community College,” Sessions said, “that are going to lead us to be the beacon of success when it comes to education in the state of Missouri.”

Hannah Hoffmeister of the Columbia Missourian, Kassidy Arena of KBIA and Daniel Perrault of KOMU contributed to this story.