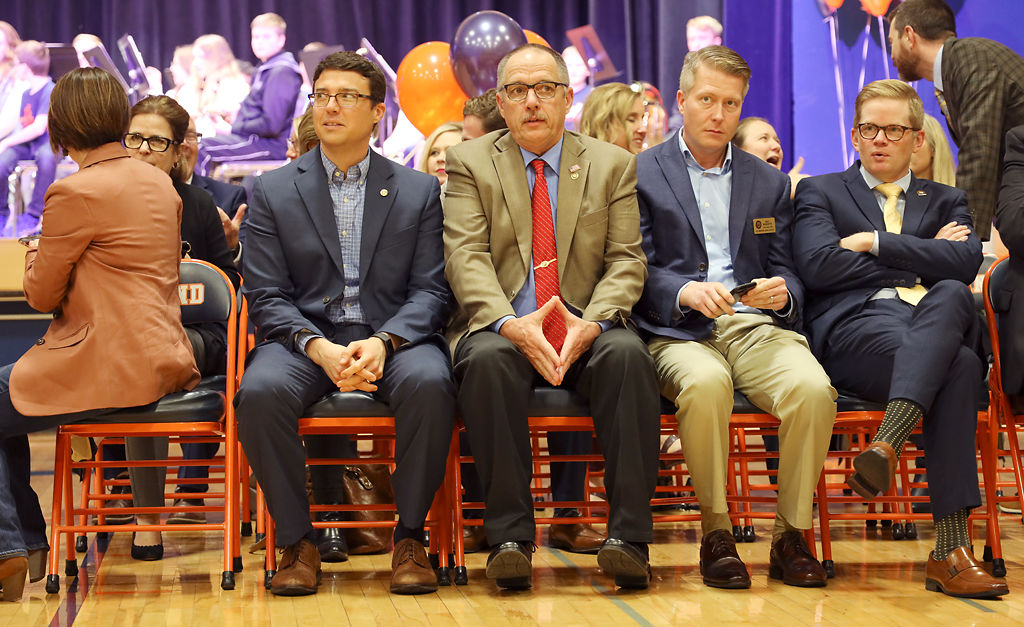 From left, Martha Stevens, Kip Kendrick, Chuck Basye, Ray Bozarth and Caleb Rowden all sit in attendance of the surprise announcement of Melissa Fike receiving a $25,000 award from the Milken Foundation on Friday at Oakland Middle School. Teresa Parson, the governor’s wife, was also in attendance. 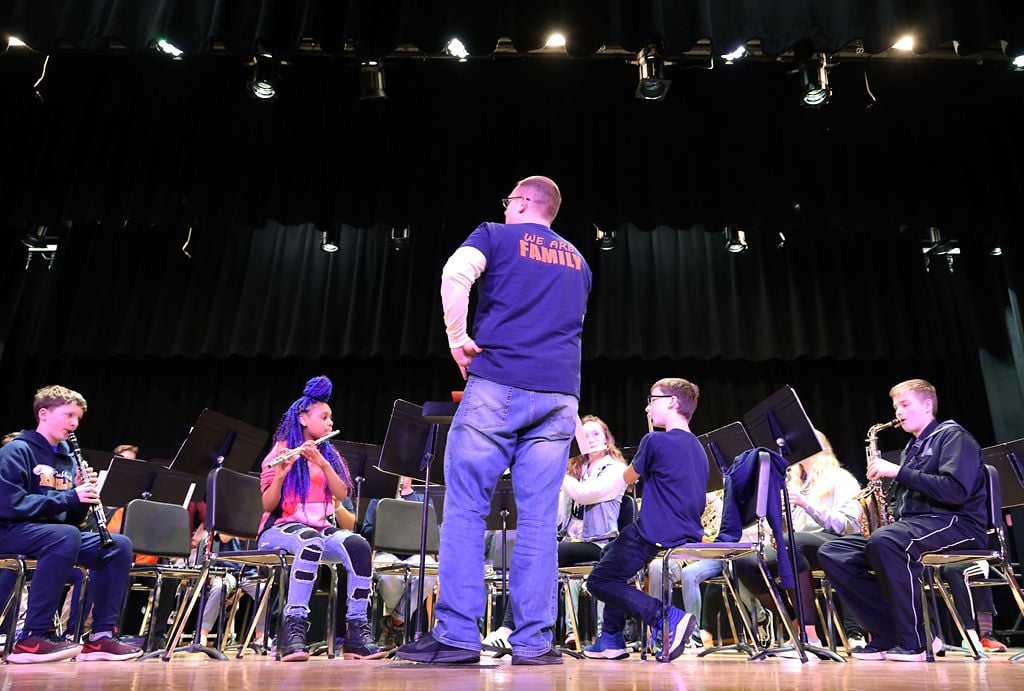 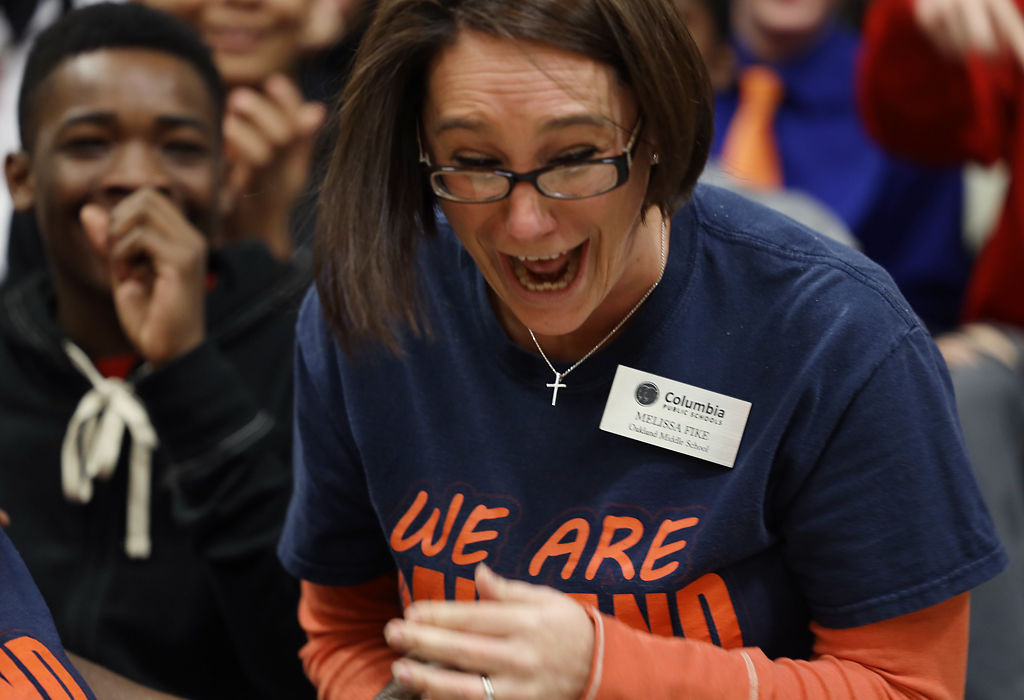 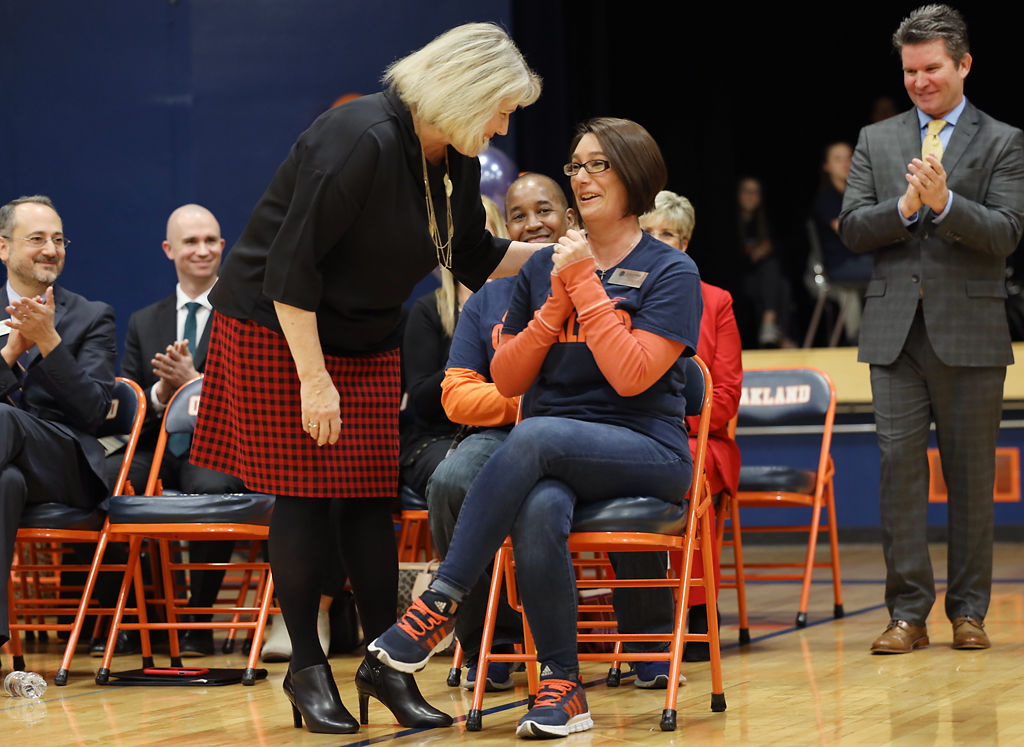 Teresa Parson congratulates Melissa Fike after she was announced as a winner of a Milken Foundation Educator Award on Friday at Oakland Middle School in Columbia.

From left, Martha Stevens, Kip Kendrick, Chuck Basye, Ray Bozarth and Caleb Rowden all sit in attendance of the surprise announcement of Melissa Fike receiving a $25,000 award from the Milken Foundation on Friday at Oakland Middle School. Teresa Parson, the governor’s wife, was also in attendance.

Teresa Parson congratulates Melissa Fike after she was announced as a winner of a Milken Foundation Educator Award on Friday at Oakland Middle School in Columbia.

The students, faculty and staff of Oakland Middle School had no idea one of their teachers’ lives would change during an assembly Friday.

Kids’ cheers echoed in the Oakland gym as Melissa Fike’s name was announced and she was handed a giant check representing a $25,000 Milken Educator Award. The national award recognizes outstanding K-12 teachers, principals and specialists — and Fike can use the money any way she wants.

Fike, who teaches eighth-grade math, is one of up to 40 educators across the country receiving the award this year. It was presented by Greg Gallagher, Milken Educator Awards senior program director, and Margie Vandeven, Missouri Commissioner of Elementary and Secondary Education.

“This is quite overwhelming,” an astonished Fike said after the announcement.

“She’s really deserving,” Tracy Grant, Fike’s husband and a home-school communicator at Oakland, said. “I can’t tell you how many weekends we sat down planning how to help her students.”

Fike has worked in Columbia Public Schools since 2006, student-teaching at West Middle School before joining Oakland. She invests in students in the classroom, at the school and district levels and beyond.

Fike, who is chair of Oakland’s math department, teaches through investigative learning, according to a Milken release. She organizes her instruction around themes and finds fun ways to encourage students to practice math, “including clue games, math trails and cooperative activities.”

“When students are confused or absent, Fike posts videos online to help them catch up and ensure no one is left behind,” the release said.

Regarded as “zany, funny, tough but fair,” according to the release, Fike is one of the first teachers students visit when they return after graduation.

“The inside jokes and mnemonic devices she used as memory aids stay with her pupils long after eighth-grade,” the release said.

District Superintendent Peter Stiepleman said in the release that Fike “lives and teaches resiliency every day. She firmly believes that every student can and will succeed.”

In addition to the money, Fike will be provided with professional development opportunities, such as networking with leading education partners, according to the Milken website.

About $70 million has been awarded, $25,000 at a time, to more than 2,800 educators nationally, the website said. Educators can’t apply for a Milken award themselves and do not know when they are under consideration.

“The initiative not only aims to reward great teachers, but to celebrate, elevate and activate those innovators in the classroom who are guiding America’s next generation of leaders,” the release said. “Fike is making that future a reality for students of all aptitudes and backgrounds.”

A finance update and concern for policies relating to students with special needs also came up at Monday's meeting.