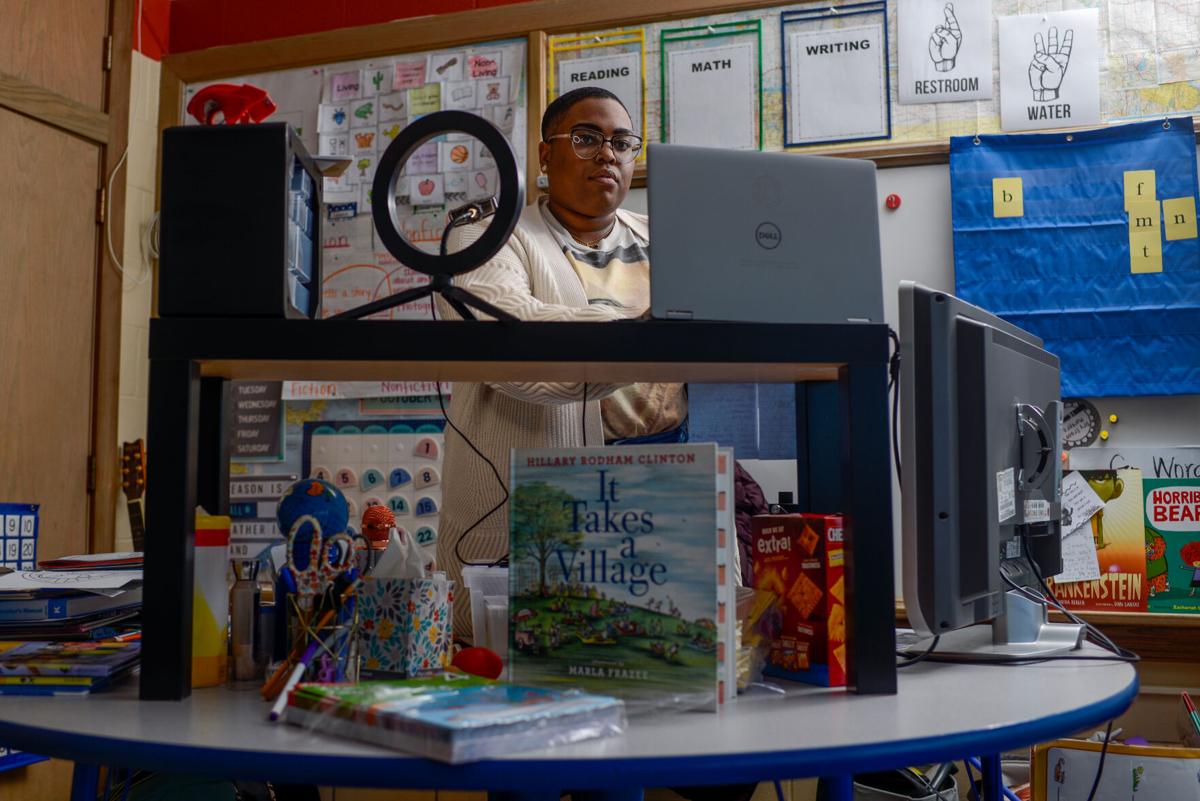 Dawnavyn James prepares in her classroom Jan. 12 at Parkade Elementary School. Her TikTok videos, which only show her, have garnered tens of thousands of followers. 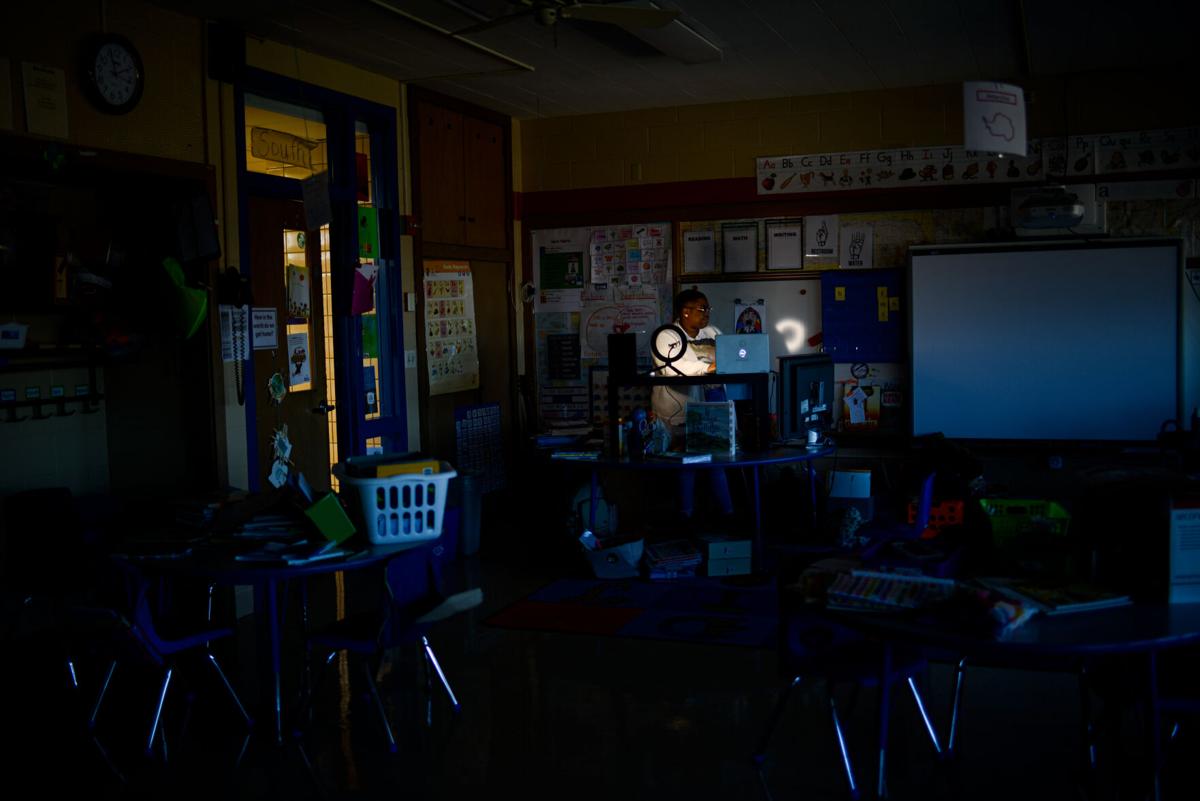 Dawnavyn James listens in on her class during a counseling session Jan. 12 at Parkade Elementary School. James wants to incorporate practices from the counseling sessions, such as breathing exercises, in her own lessons. 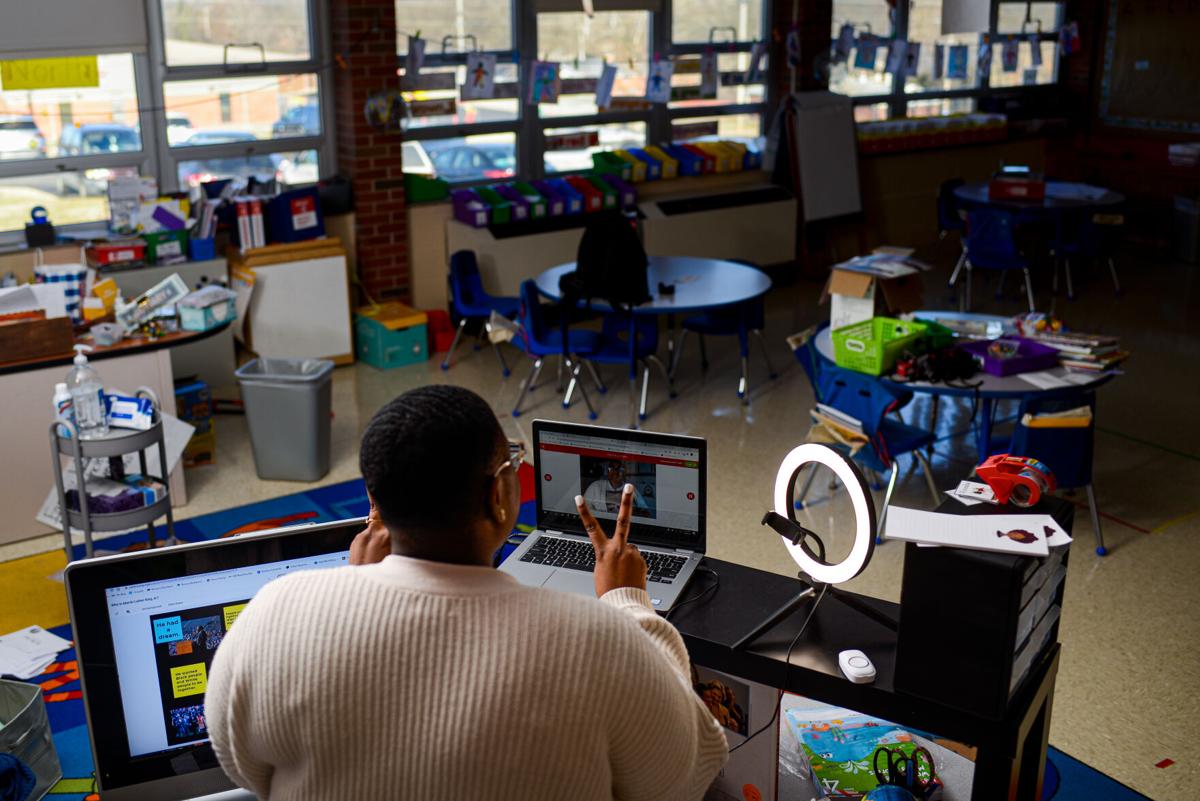 Dawnavyn James waits for her students to get online Jan. 12 at Parkade Elementary School. James is looking to read books about Martin Luther King Jr. to her students in future lessons and have discussions about the books.

Dawnavyn James prepares in her classroom Jan. 12 at Parkade Elementary School. Her TikTok videos, which only show her, have garnered tens of thousands of followers.

Dawnavyn James listens in on her class during a counseling session Jan. 12 at Parkade Elementary School. James wants to incorporate practices from the counseling sessions, such as breathing exercises, in her own lessons.

Dawnavyn James waits for her students to get online Jan. 12 at Parkade Elementary School. James is looking to read books about Martin Luther King Jr. to her students in future lessons and have discussions about the books.

Last spring, as people around the world grew accustomed to their workplace interactions now taking place over Zoom, Dawnavyn James began to share via TikTok how those interactions looked in her Parkade Elementary kindergarten classroom.

The Kansas City native now has just over 44,000 followers on TikTok, a social media platform that allows users to share short videos.

She wants her classroom — now virtual — to be a space where children feel heard and welcomed.

“We just try hard as a classroom to just create a safe space where they can speak up and be silly,” the 29-year-old said. “They’re 5 and 6 and sitting on a computer. They need space to be silly and speak their minds.”

In return, her followers on social media are able to experience all the silliness and fun that comes with teaching young children. It’s a win-win.

James starts the day with a song and dancing with her kids. Throughout the day, she records snippets of funny moments, like the kids sharing stories about their families and singing songs they like to listen to.

In a recent video, James is wearing a blue hat and a small voice in the background — sounding rather disappointed — asks, “Why do you have a blue hat that’s blue now? I thought you would keep wearing the pink one.” James laughs. “I know I was going to wear the pink one today, but the blue one matches my shoes!” she responds. Another student asks, “Are you wearing your taco socks?” In fact, James was not wearing her taco socks that day, but she did promise to wear them the next day.

Her videos are short and simple. Viewers only sees James, dressed in her colorful outfit of the day, with audio of tiny voices on the other side of her computer. James includes subtitles because not everyone is skilled in the dialect of kindergarteners. The videos attract a loyal fanbase who comment about the joy of scrolling aimlessly through the sea of tiny voices, Ms. James’ singing and her creative graphic tee shirts that change daily. One viewer wrote, “When you pop up on my feed, I am instantly uplifted. Keep it up, ma’am!”

She said the teachers and parents at her school love her videos. When she started posting the videos in March, her assistant principal asked for some tips on how to create and share content on TikTok. During parent-teacher conferences, James said she received encouragement from parents who watch the videos. She said they love them, and for Christmas, a parent gave James a tumbler that said “TikTok Famous” on the front. James said they understand that everyone has different ways of coping with difficult times, especially kindergarten teachers having to teach 5- to 6-year-olds solely through a screen.

Amy Watkins, the principal at Parkade Elementary, said James brings energy and joy to her classroom and to the school as a whole.

“There’s evidence everywhere of how much parents and families love the process of her videos,” Watkins said. “I’m sure they love hearing little quotes from their kids and their classmates.”

Teachers everywhere have struggled to keep their students engaged via Zoom during the pandemic. It’s no surprise teachers of tiny humans have an extra-grueling task. It’s difficult enough to entertain a group of high school students all day while they stare at a computer. What about kindergarteners?

James has managed, and all the while, created a name for herself on social media sites. James said she’s able to interact with other teachers from around the country and share techniques and ideas to make this year the best they can for their students.

James is dedicated to immersing her young students into her curriculum. Throughout the pandemic, she has tried her best to keep the kids as interested and interactive as possible. James said the best way to do this is to keep the kids on their toes. She said she changes up her teaching methods to keep the kids engaged.

Just the other day, James continued their discussion on learning the alphabet by incorporating the letters in American Sign Language. She said the kids loved it because it was new and different.

The Black History Club is a virtual after-school program created by James. It started in September, and so far, James said, it has been highly rewarding for her and the students.

She said the parents are all about it, and so is she.

“It’s a really cool experience for me because I learn so much from them as well. There’s just things I do with them that I can’t do in my classroom because they’re a little younger,” James said.