Columbia Public Schools will be starting later next year. Students and teachers will have to adjust to a lopsided academic year under a new calendar the Board of Education approved this week.

To accommodate a new state law that aims to extend the summer vacation season to benefit Missouri’s tourism industry, the CPS 2020-21 school year will begin Aug. 25 — 10 days later than this year. This will shorten the first semester by six days and create an imbalance between the two semesters for secondary schools (grades 6-12). Additionally, CPS will have spring break a week later than usual.

Finals for fall semester classes will still take place before the winter holiday break. That’s how students and teachers said they wanted it in a survey CPS took before setting the new calendar, Chief Human Resources Officer Nickie Smith told the board Monday. School officials said the idea of extending the semester to even out the calendar wasn’t popular.

“Years and years ago it used to end after winter break. Students and teachers hated it,” Michelle Baumstark, CPS community relations director, said in an email. “The district worked hard to rearrange the calendar to get first semester to end before winter break. We’ve had it that way now for about 10 years.” 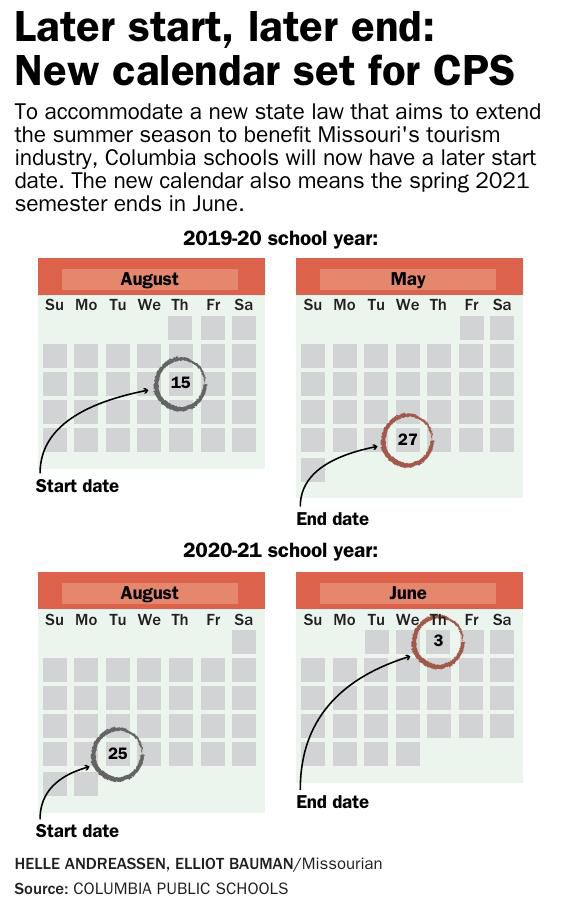 The school district was forced to reconsider the arrangement because of the new law, approved by the Missouri legislature this past spring and signed by Gov. Mike Parson in the summer. It prohibits schools from starting more than 14 days before the first Monday in September — Labor Day.

Supporters of the law say it will help the state’s tourism industry and give families another week of summer vacation.

But at their meeting this week, members of Columbia’s school board grumbled about the law and the lack of flexibility it leaves school administrators.

“With the new law, it was creating a challenge to have the semester end before winter break because of the number of days in the semester,” Baumstark said. “There were concessions that had to be made in building the new calendar in order to make that possible.”