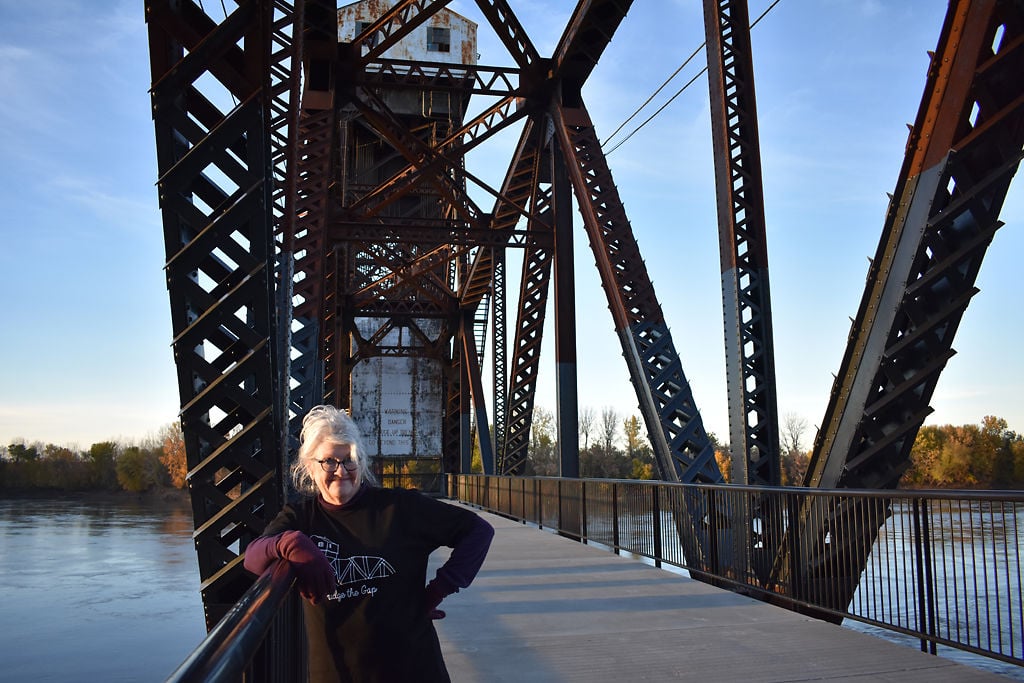 Katy Bridge Coalition President Sarah Gallagher enjoys phase one of the Katy Bridge project, which allows pedestrians to walk out on part of the bridge. 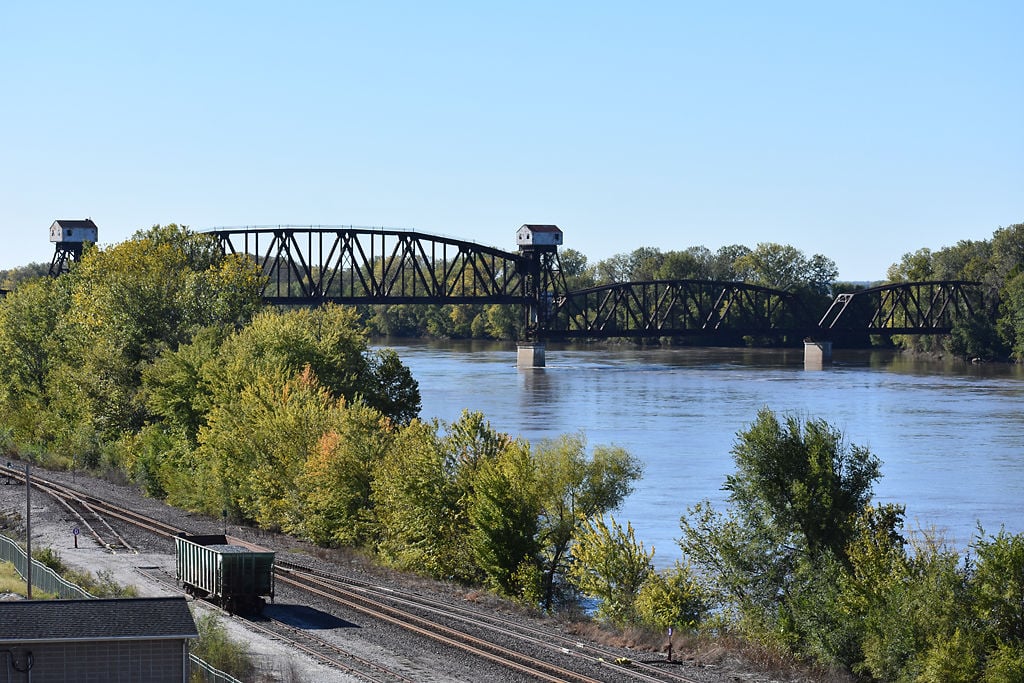 The Katy Bridge is a landmark in Boonville. Community members have worked to restore the bridge to be a part of the Katy Trail. 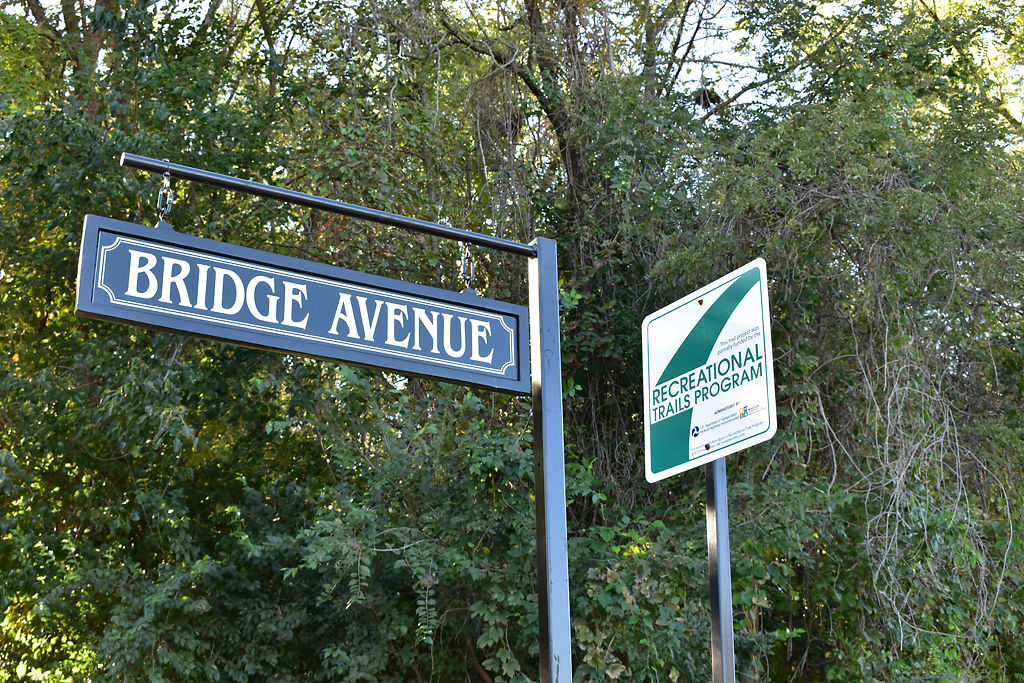 Katy Bridge Coalition President Sarah Gallagher enjoys phase one of the Katy Bridge project, which allows pedestrians to walk out on part of the bridge.

The Katy Bridge is a landmark in Boonville. Community members have worked to restore the bridge to be a part of the Katy Trail.

This article has been updated to correct information about how Boonville residents found out about the planned dismantling of the Katy Bridge.

Lily Terrell, a junior at Boonville High School, was among 15 students who participated in a project with Reynolds Journalism Institute fellow Nico Gendron to learn about writing and reporting on their own communities. Terrell’s story was selected as the winner in a contest among participants. Her story and two finalist projects are being published in the Missourian. You can read more about the project on our website.

When Sarah Gallagher tells nonresidents about the Boonville bridge, she is often moved to tears.

The Katy Bridge Coalition president and Boonville native has led a 14-year battle to save, preserve and integrate the Katy Bridge in Boonville into the 240-mile Katy Trail system.

Inspired by members of the Katy Bridge Coalition, many people stand behind the Katy Bridge, which is Boonville’s most iconic landmark. These members have worked countless hours and fought many battles to keep the bridge alive.

Gallagher compares the Katy Bridge to the Eiffel Tower.

“If you had the Eiffel Tower in your town, would you really say: ‘Oh, yeah. Just blow it up,’ or, ‘We don’t care about that … .'" Gallagher, 74, said. “Every town in America, every town in Missouri does not have a tourist attraction of this magnitude. This has never been about a person. She (the bridge) has a life of her own.”

The Missouri-Kansas-Texas Bridge, or MKT Bridge No. 191.1, was constructed in 1932 and has a long and significant history. At the time of construction, the design was progressive — it was the longest central, vertical lift-span railroad bridge, crossing the country at 408 feet long.

The iconic landmark, now known as the Katy Bridge, sat dormant from 1986 to 2004 when the U.S. Coast Guard ordered it removed because it was deemed hazardous to navigation. In the 1980s, however, the Union Pacific Corp. made a verbal agreement with the city of Boonville that it would contact city officials if it planned to dismantle the bridge.

In July 2004, a Boonville Daily News story revealed that Union Pacific was planning to dismantle the Katy Bridge and reuse the steel for a bridge over the Osage River in Warsaw.

As the news spread, Gallagher, then Boonville Economic Development director, began a movement. The effort pitted Boonville, a town with a population of 8,200, against Union Pacific Railroad, the country’s second-largest railroad.

Gallagher often discusses the historical significance of the Katy Bridge.

“The bridge represents how Boonville, our little place, helped settle the West. It’s about transportation,” Gallagher said. “It’s about expansion. It is about the building of the railroad itself, which is how our country was settled. It is representative of what America is all about.”

Many community members have personal connections to the Katy Bridge. Coalition member and Boonville resident Todd Baslee became involved because of his family’s connection to the bridge.

The bridge is also a family affair for coalition member Yardley Wing, whose mother, Pam Davis, was a founding member.

“My mother worked on the bridge project tirelessly with very few people involved, and they saved it, and she passed away,” Wing, 46, said. “I had been gone while she was doing all that, and when I got back in town, they asked me if I wanted to join. I said yes because I don’t want it to go anywhere. I would love to be able to bicycle across the bridge without having to get on the motorcar highway.”

Gallagher, who continues to be at the forefront of the battle, now focuses on the next phase, raising money to make the lift span functional and connect the bridge to Howard County.

As seen from Boonville’s Missouri River skyline, one-third of the bridge has been rehabilitated. Visitors see a panoramic view of the Missouri River from its walkway.

The current restoration cost is approximately $5 million, funded through private donations, city revenue and federal block grant funds. The goal is to open a walkway and bike trail that spans the remaining 1,000 feet to connect the Katy Trail between Cooper and Howard counties.

The Katy Bridge Coalition has more plans for the bridge, but it still lacks funding.

“This might take a miracle, but we never lose hope,” Gallagher said. “Timing is everything. The Katy Bridge has always had her own schedule. We fight for her, knowing when conditions are right, she will make it happen.”

If you would like to donate or learn more about the Katy Bridge project, find out more here.

The Missourian is running the three winners of a project developed by Reynolds Journalism Institute fellow Nico Gendron. She explains the reason for the project.