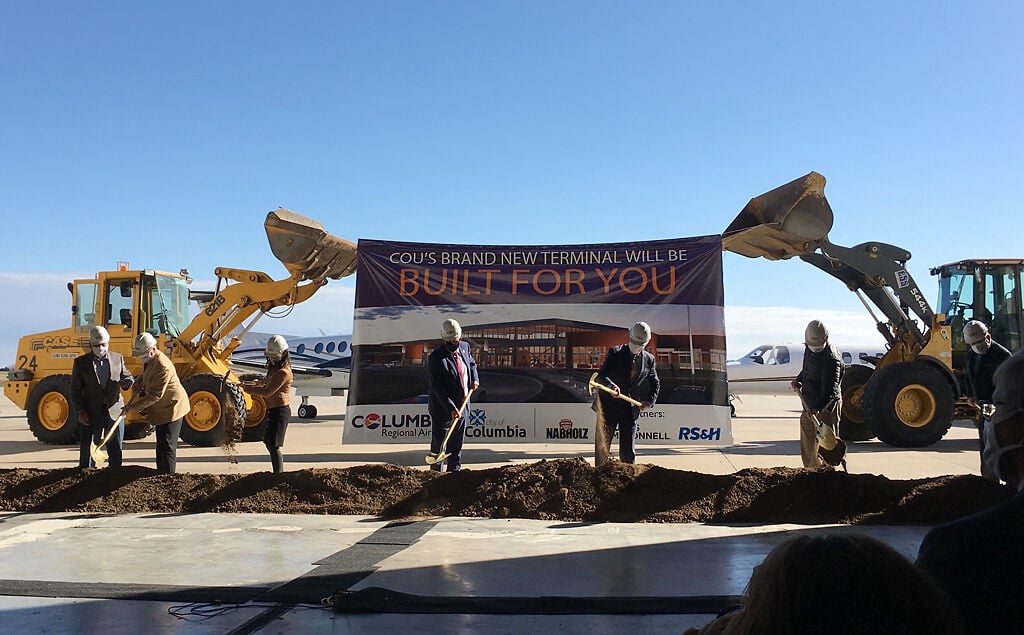 Local and state officials shovel a patch of ceremonial dirt in Hangar 530 on Tuesday morning at the Columbia Regional Airport. The ceremony signaled the beginning of construction on the airport’s new terminal.

This is an artist's rendering of the new Columbia Regional Airport terminal being designed and built by Nabholz Construction.

Local and state officials shovel a patch of ceremonial dirt in Hangar 530 on Tuesday morning at the Columbia Regional Airport. The ceremony signaled the beginning of construction on the airport’s new terminal.

This is an artist's rendering of the new Columbia Regional Airport terminal being designed and built by Nabholz Construction.

A previous version of this story showed the incorrect artist's rendering of the airport terminal Nabholz Construction will build at Columbia Regional Airport.

The sound of planes flying overhead filled Hangar 530 as local and state officials dug gold-colored shovels into a ceremonial patch of dirt to signify the beginning of construction for Columbia Regional Airport’s new terminal Tuesday morning.

This was not the beginning of work on this project. Plans have been underway for years. Officials said the wait will be worth it when the terminal opens in summer 2022, bringing business opportunities and boosting the image of mid-Missouri.

The project has involved cooperation from local, state and federal entities, each represented by speakers Tuesday, who addressed a room of about 50 people in the hangar with more watching virtually.

The speakers celebrated how far the airport has come in recent years. It began with flights to St. Louis or Kansas City, Columbia Mayor Brian Treece recalled. Greg Steinhoff, a Boone Hospital Center trustee, said it eventually expanded to include Memphis with two flights a day on small jets.

“About 10 years ago, many of you in this room will recall this airport was pathetic,” Steinhoff said. “We were so good that we were on the list of America’s 10 worst airports. Something had to change.”

It certainly did change. The airport added flights to Chicago, Dallas and Denver. The new terminal will provide the space needed to add destinations such as Charlotte, North Carolina, and continue expanding, Treece said.

More access will mean more economic opportunities. Several speakers, including Gov. Mike Parson, noted that the convenience of being able to fly between Columbia and many major airport hubs will help attract businesses.

Even the act of building the new terminal will help economically, creating new construction jobs “at the time when we needed it most,” Treece said, referring to unemployment caused by the the pandemic.

A better terminal can also help shape the image of the community, several speakers said. This extends beyond Columbia and to the whole mid-Missouri area, and Jefferson City Mayor Carrie Tergin said she was excited for the new terminal as well.

“The airport in so many ways is the front door of a community,” Blunt said. “And if you come to that front door and it looks like it’s not a very good front door, you begin to think different about the community than you would otherwise.”

Columbia’s “front door” has not always been the best. Dan Atwill, Boone County presiding commissioner, said walking through buildings with shaky floors and temporary looks doesn’t represent the best the area has to offer. The new terminal will change that.

“(Travelers) wonder, where are they? What are they doing in this cow town?” Atwill said. “This is going to change that atmosphere in a way that we could never have dreamed.”

Fogle described the design Columbia settled on: a sleek, modern building, with lots of windows and nods to the local culture.

“You can expect a project with a lot of open spaces, natural light, upgraded finishes (and) modern systems with a focus on the ease of experience for the passenger and visitor alike,” Fogle said.

The terminal will cost an estimated $26.6 million, which will be financed through bonds paid for by passenger facility charges and hotel tax revenue. The investment, though, will carry the city far into the future.

“This is one of those generational investments that will not only help us recover long after this pandemic is over — but a once-in-a-lifetime investment that, 50 years from now, we can all be very proud of,” Treece said.

Treece likened the culmination of the project to the act of flying on a plane.

“You know, for many people, flying on an airplane is an act of faith. It requires a belief in science, a belief in physics and, for those pilots in the room, a belief in Bernoulli’s principle of lift,” he said. “It also requires that we be dependent on others. Not just the pilot in the cockpit but the mechanics who service the plane, the controller in the tower, right down to the baggage handler that makes sure your luggage gets to your destination.

“Who knew that building an airport terminal would also be an act of faith?”