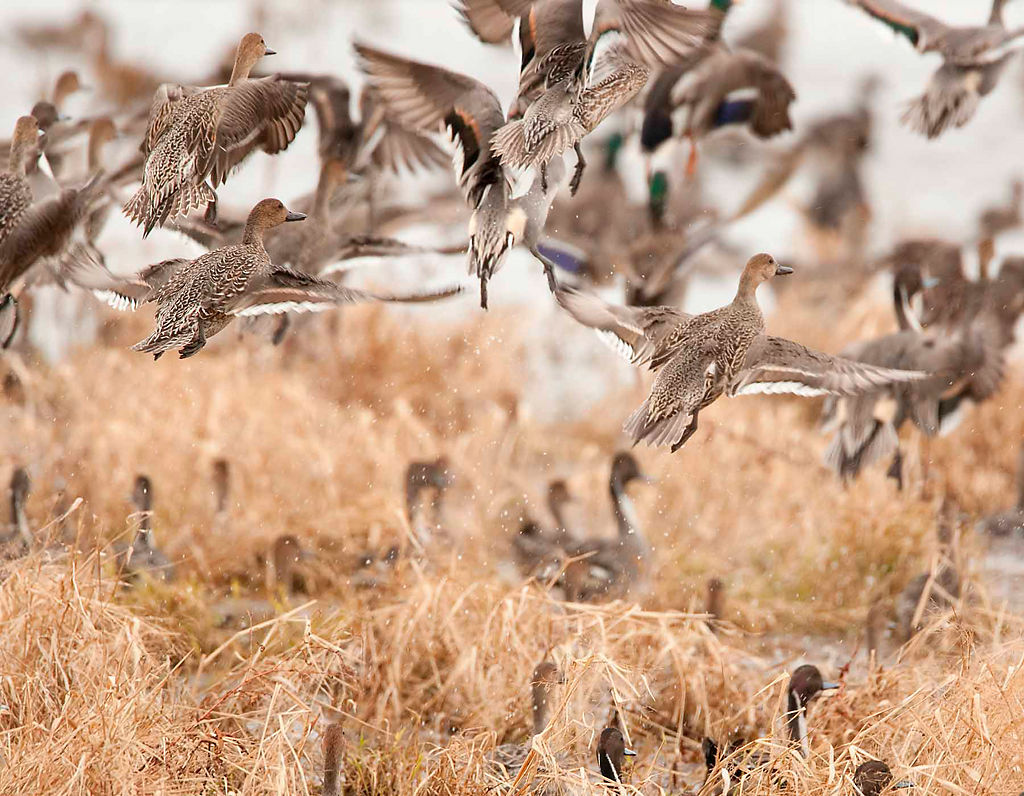 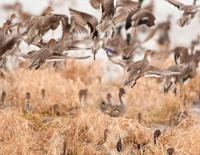 Bronze speculums — colored wing patches — are visible on northern pintails as they take flight. According to the Missouri Department of Conservation, duck hunting season in Missouri will begin Nov. 2 and run through January. 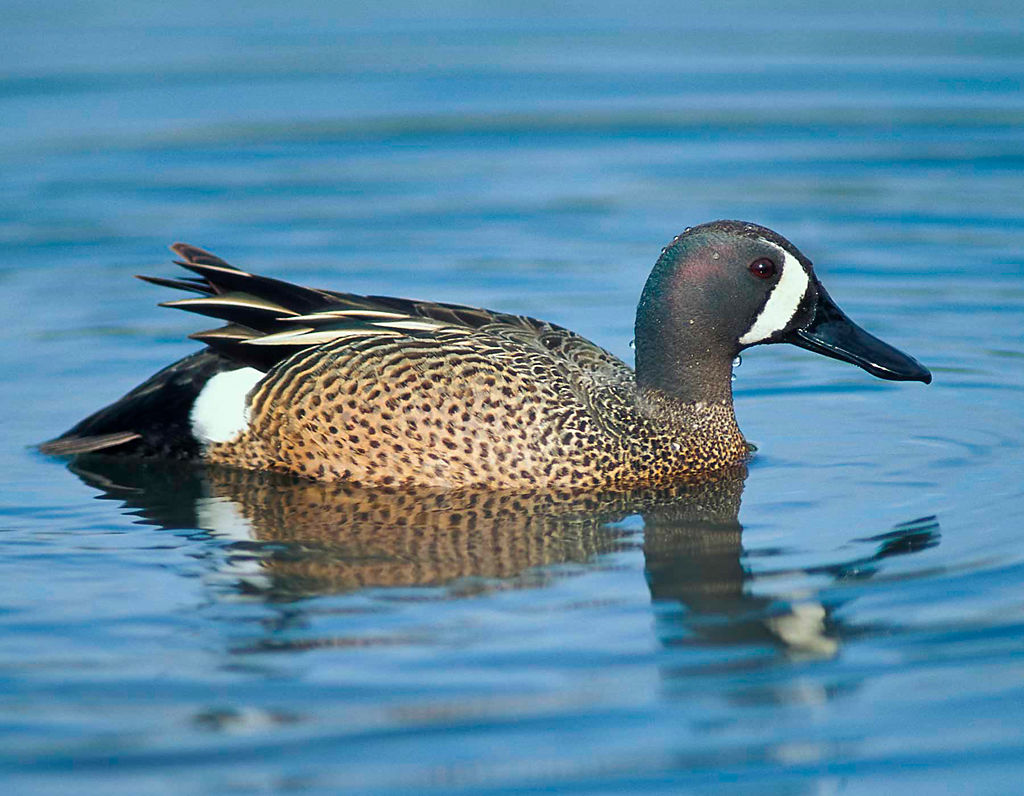 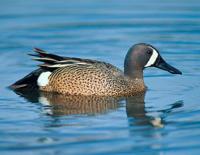 The adult male blue-winged teal is a small duck with a dark gray head and a white crescent on the face between bill and eye. Teal are a group of smaller duck species that migrate earlier in the year, which places their hunting season from Sept. 7-22.

Bronze speculums — colored wing patches — are visible on northern pintails as they take flight. According to the Missouri Department of Conservation, duck hunting season in Missouri will begin Nov. 2 and run through January.

The adult male blue-winged teal is a small duck with a dark gray head and a white crescent on the face between bill and eye. Teal are a group of smaller duck species that migrate earlier in the year, which places their hunting season from Sept. 7-22.

For those who patiently await the annual waterfowl migration, timing is everything.

Every fall when the cold weather pushes them south, waterfowl swoop down to eat and rest in the Missouri wetlands before moving toward warmer climates. This year’s significant flooding might affect where these birds stop on their journey.

Here is the Missouri Department of Conservation's waterfowl hunting guide for the 2019-20 season. The guide includes rules and regulations, zone boundaries, tips on where to hunt, season dates and keys to the identification of ducks and other waterfowl species.

Missouri Department of Conservation wetland ecologist Frank Nelson said all the conservation areas in the Missouri and Mississippi river bottoms — as well as along the Osage River — have been affected by the flooding. Some of the Missouri River gauges recorded the second-highest flood levels on record during late May to mid-June, surpassed only by record levels during the Great Flood of ’93, according to the U.S. Geological Survey’s current water data for Missouri. A few gauges in 2019 set all-time records.

“This year is on track to be the wettest on record, with a statewide year-to-date average total of 40.79 inches,” MU climatologist Pat Guinan wrote in his August weather impact report for the Missouri Climate Center.

During the growing season this year, flooding prevented wildlife managers and agrarians from growing as much, if any, of the corn and soybeans that often attract ducks and other waterfowl. Agriculture is just one component of creating the right habitat. Other management practices continue to function, but no one can be certain how the changed landscape will affect the quantity and distribution of the birds.

When waterfowl fly over the Missouri wetlands, they’re looking for food and cover they can get by expending the least amount of energy. Commercial crops such as corn are attractive because they provide abundant, quick energy. Nelson compared these starchy plants to fields of candy bars.

"This year's flooding has minimized the availability of these snack foods in the bottoms," Nelson said.

Dale Humburg, senior science adviser for Ducks Unlimited and a former wildlife biologist for the Missouri Department of Conservation, said there are multiple factors that affect waterfowl distribution. Decreasing day length and wet, cold weather push the birds to begin their migration. Humburg said these are two highly influential factors over which conservation area managers have no control.

Humburg, however, said managers can still aim to foster the ideal habitat that maintains or increases waterfowl populations. This can include growing the right vegetation and adjusting wetland water levels to correspond to migrations.

“Bottom line is we really need to be creative; we need to rely on our experience,” he said. “We have an impact and can have control on habitat condition, and we need to focus on that.”

Nelson described this year, like all years, as a “natural experiment.”

Working with the variables they can control, conservation managers and biologists were able to plant wet-soil plants such as millet later in the year. Nelson said he doesn’t think the birds will fly over and beyond Missouri conservation areas because there will be plants and bugs to eat, providing a well-balanced diet, as well as plenty of water to land on.

“The table will be set,” he said. “It will just be a little different than other years.”

Managers that have access to functioning levees will be able to relocate water by pump to manage water levels. Unfortunately, Nelson said, flooding has caused damage to many levees.

Nelson suspects waterfowl will return to the same conservation areas out of habit, but they may not stay if they don’t see enough food.

It’s possible to look to previous years for clues as to how the birds may react to the change. Humburg said last year was also wet, but it’s important to look at the bigger picture.

Humburg said the variability in weather, changes in snow cover, unusual patterns of dramatic weather events and substantial landscape changes are indicative of a changing climate.

“It’s important to make a distinction at this point between annual variation in weather and long-term changes in climate,” he said.

He said biologists need to be aware that long-term changes are likely to have dramatic impacts on the wetlands and waterfowl habitat and populations over time. Humburg said 40 years ago, he never would have imagined the pace at which this would be progressing.

Wildlife management of the conservation areas in the fall is critical to one group in particular: duck hunters. In Missouri, duck hunting season will begin Nov. 2 and run through January, according to the Conservation Department’s website. 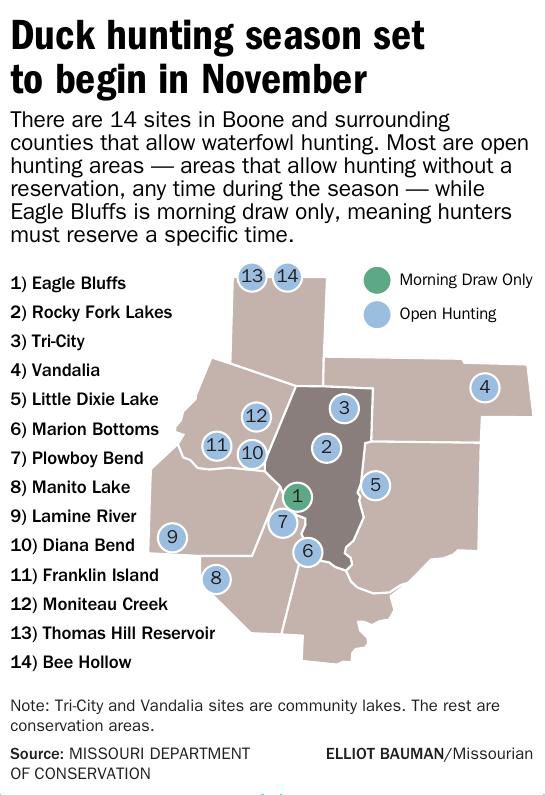 Those who engage in the sport know it differs from other types of hunting for a lot of reasons, one being that hunters can talk to one another instead of staying quiet.

Tanner Smith appreciates the birds and the camaraderie and connections he’s made through duck hunting.

“It’s like a connecting chain link that just keeps spreading out everywhere,” Smith said. “It’s like a spider’s web.”

Smith is a senior at MU and started duck hunting with friends when he was in high school. The group still meets to hunt together every year.

“On my first waterfowl hunt, I was grinning ear-to-ear seeing the birds work,” he said. “It’s just beautiful really, just to watch them fly.”

Smith is president of MU’s chapter of Ducks Unlimited.

Ducks Unlimited, which had over 600,000 adult members nationally as of Jan. 1, aims not only to build communities of outdoor enthusiasts but also support conservation, according to its website. The MU chapter hopes to help clean up local conservation areas this year after the hunting season ends.

“We try to focus more on raising money for the ducks and helping preserve our wetlands,” Smith said.

Teal, a group of several smaller duck species, are early migrators. The hunting season for those was Sept. 7-22, according to the Conservation Department, and their distribution varied among conservation areas.

Brady Lichtenberg is a wildlife biologist at Eagle Bluffs Conservation Area southwest of Columbia and along the Missouri River.

He said Eagle Bluffs saw few teal during the season, but he attributed that to the heat, not the flooding.

Lichtenberg said staff at Eagle Bluffs were able to plant moist-soil crops as well as some strips of corn and sorghum-sudangrass after the usual growing period had passed. He said there are many large expanses of still water for the ducks to land on, which should attract them.

Eagle Bluffs sustained damage to one of its levees that normally allows it to manage water levels in its wetland cells. If staff are unable to fix the hole in the levee, he said, it could cut by half the amount of waterfowl habitat available.

“Of all the places on Eagle Bluffs for a levee to break, this was probably one of the worst spots that it possibly could have broken,” he said.

Lichtenberg recommended hunters visiting Eagle Bluffs this season bring their cover with them.

“This year it might be tough to hide in a lot of the pools if you don’t have a layout boat or a special blind, like the hunting gear that’s made for situations like this,” Lichtenberg said.

Hunters should also expect each conservation area to be affected differently, he added.

Despite both areas being on the Missouri River, for example, Eagle Bluffs weathered this year’s flooding differently than Grand Pass Conservation Area in Saline County.

The Conservation Department’s wetland area status indicated Grand Pass had a continued spring/summer flood that would limit hiding cover. Eagle Bluffs, on the other hand, sustained major levee and pump damage. Both areas, however, were surveyed to have fair amounts of moist-soil food.

Conservation department wildlife biologist Robert Henry said he heard hunters say Grand Pass’ season was almost like a dove hunt. The birds would move to where there were no hunters because there was so much flooded space.

“Overall, we had a pretty decent teal season,” he said.

Henry said he expects a decent early duck hunting season, too, because of the amount of water. But he doesn’t expect huge overall numbers because the birds can disperse so widely. He suspects the ducks will move south once the water starts to freeze later in the season.

Those planning to visit public land for duck hunting in November should check the wetland area status reports when they are updated later this month.

Nelson said all waterfowl hunters are welcome to share their thoughts in the waterfowl hunter opinion survey, which will open this fall, as well as at public workshops that will be held this winter.

"Hunter input is a critical consideration for setting duck season dates that strive to accommodate hunter preferences and various styles of hunting,” according to the 2019-2020 Migratory Bird and Waterfowl Hunting Digest. “The Department will consider results from the survey and the workshops to make potential adjustments to season date formulas and zone boundaries."

Not much can be said for certain about what to expect this year when the birds make their annual journey, but Nelson advises hunters to make the most of the season.

“You can never have a great day out in the field unless you go,” he said. “We’ll figure out what this fall is going to look like together.”

A conservation biologist believes large migratory movements are unlikely the rest of the season.