As of Tuesday, 14,253 absentee, mail-in and other ballots had been requested by Boone County voters, said Brianna Lennon, the Boone County clerk. In addition to the absentee and mail-in ballots, the total includes those filed in person.

That means the county has more than doubled the number of ballots collected over the 2016 election, with four weeks of absentee voting remaining.

Lennon confirmed that the county has mailed approximately 11,500 ballots to county residents, including an additional 450 mail-in ballots to residents either overseas or in the U.S. military.

Approximately 2,000 people have already cast their ballots for the Nov. 3 election at the voter booth in the Roger B. Wilson Boone County Government Center.

“There are substantially more absentee voters compared to 2016,” Lennon said. In the last presidential election, about 6,000 county residents chose to cast absentee votes over a six-week period. 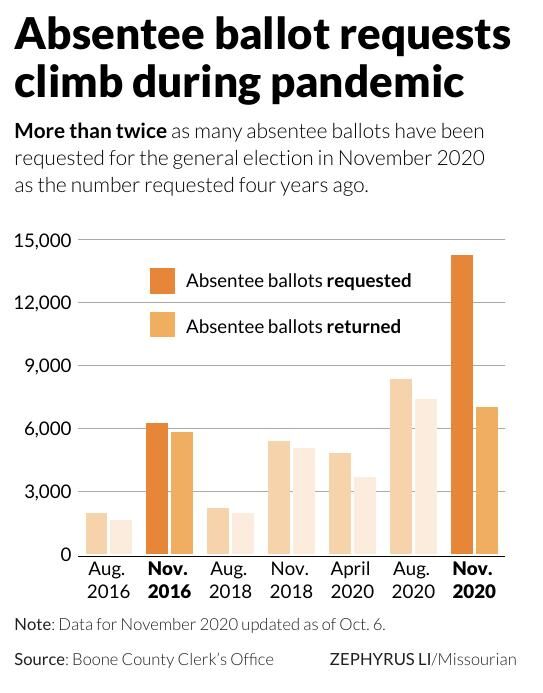 “We don’t know if that means it’s a shift of people who were going to vote in the election, or if we’re going to see a big boost in turnout,” Lennon said.

As of Tuesday, she confirmed that the county had received 7,030 returned ballots either in person or by mail.

“Many voters have been asking questions about alternative options for voting, specifically because of concerns about COVID-19,” she said.

There are six events total, spanning every weekend in October, and they will take place from 10 a.m. to 3 p.m.