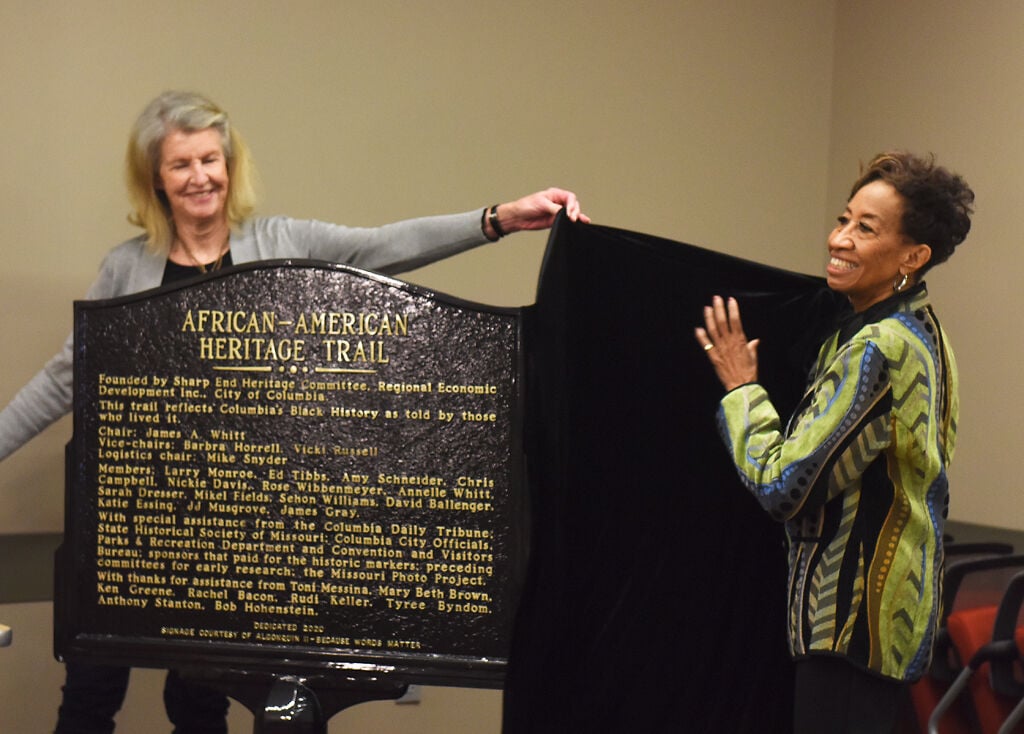 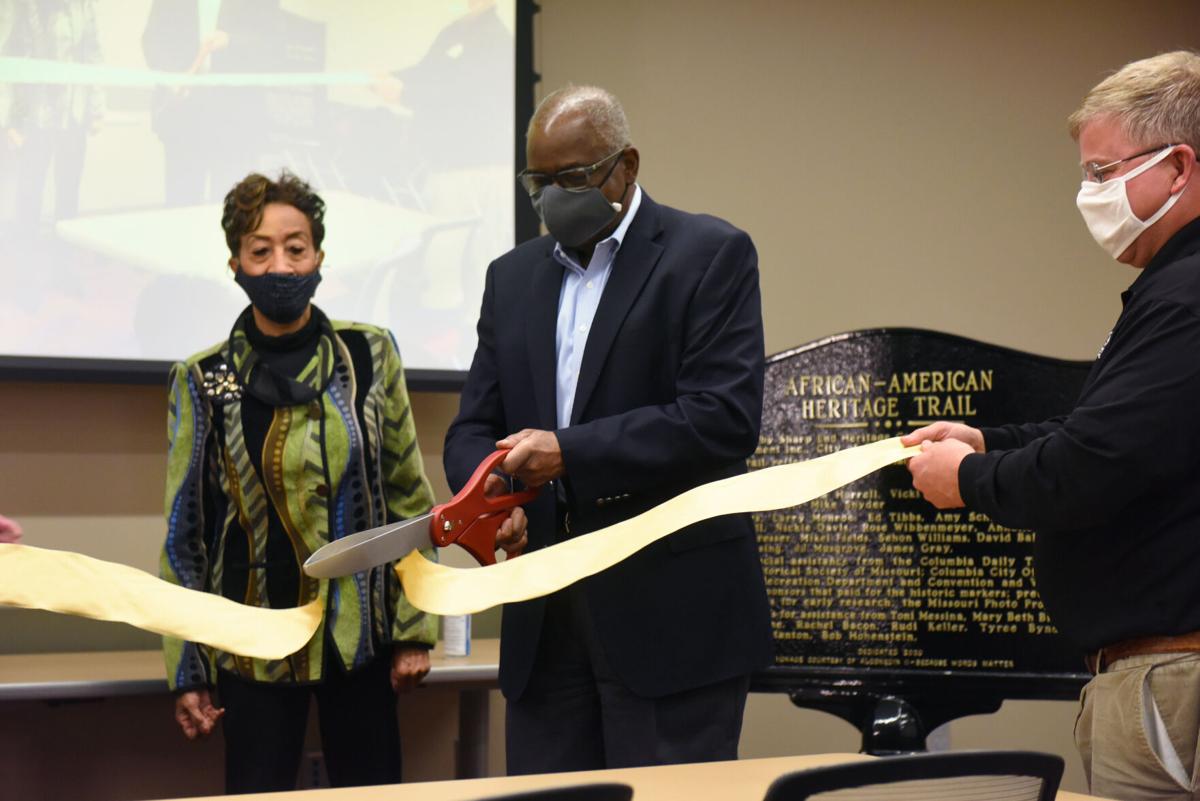 Jim Whitt, center, marks the official opening of the African American Heritage Trail with help from Barbra Horrell and Mike Snyder on Thursday at the REDI offices in downtown Columbia. The trail features 22 markers and more than 30 locations, businesses and people who were notable figures in Columbia’s African American community. 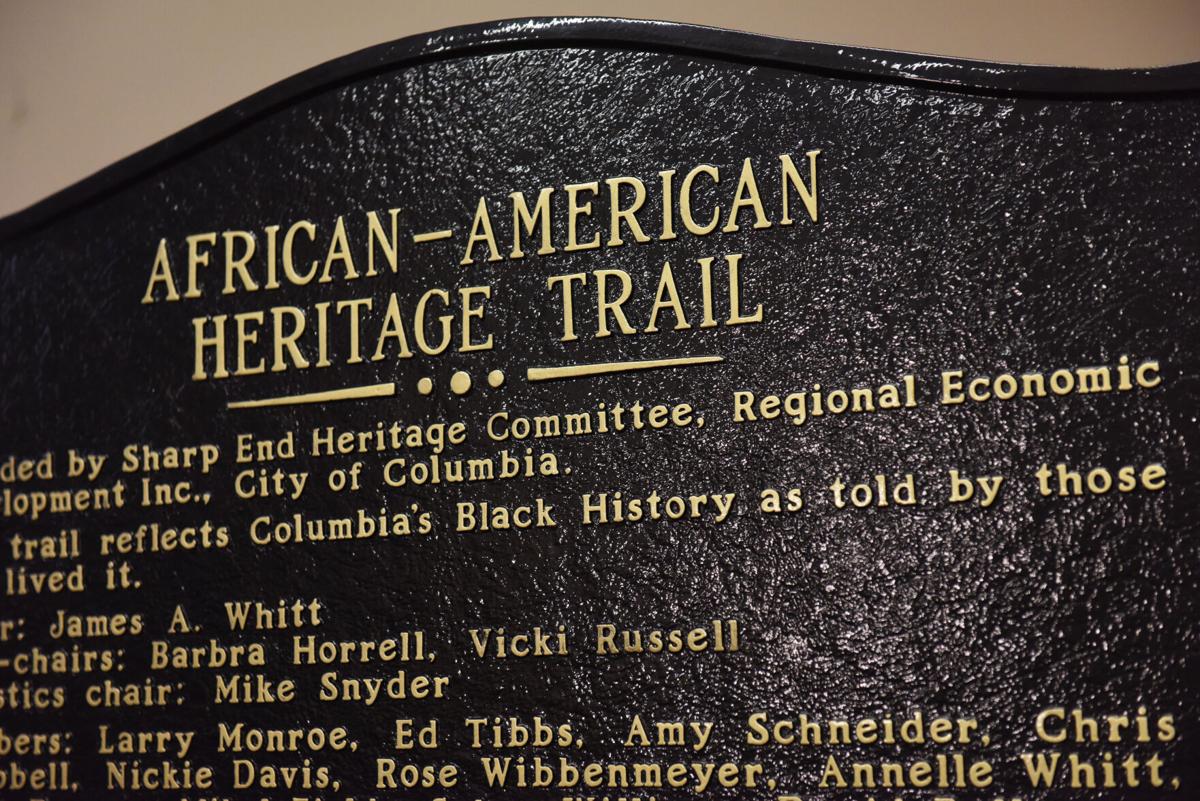 The reveal of the official marker for the African American Heritage Trail bookends five years of work establishing the trail Thursday at the REDI offices in downtown Columbia. The trail marker will be placed in Flat Branch Park, and information about the trail can be found via brochure, as well as the Otocast app for both iPhone and Android. 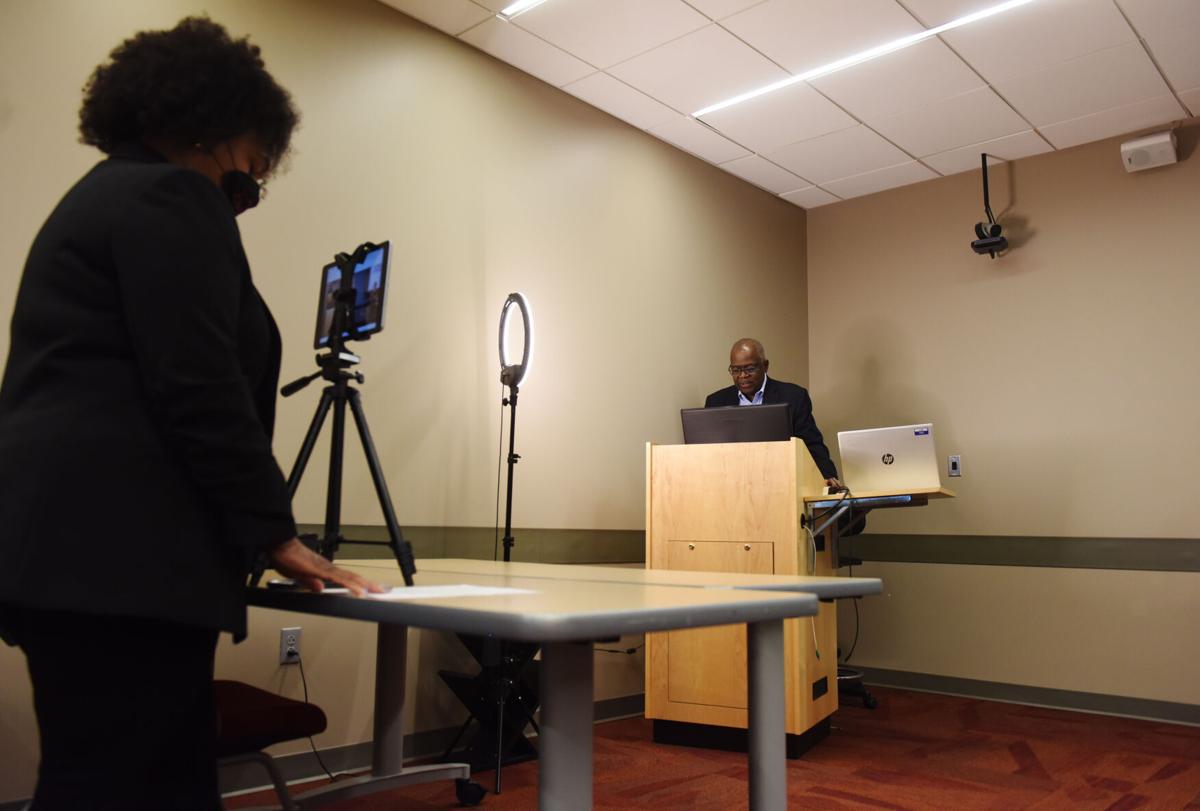 Adonisca Coleman, left, runs the virtual unveiling via iPad while Jim Whitt, chair of the Sharp End Heritage Committee, thanks contributors and details the trail’s many features Thursday at the REDI offices in downtown Columbia. In addition to this event, another location-specific dedication is scheduled for the spring. “The trail is open, and it awaits you,” Whitt said. 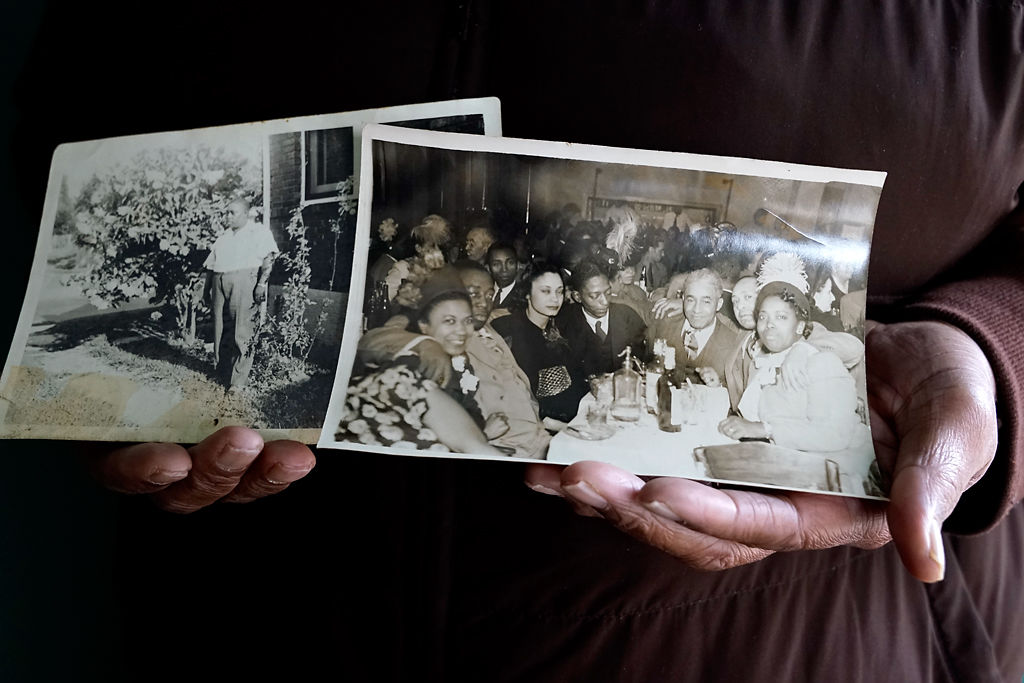 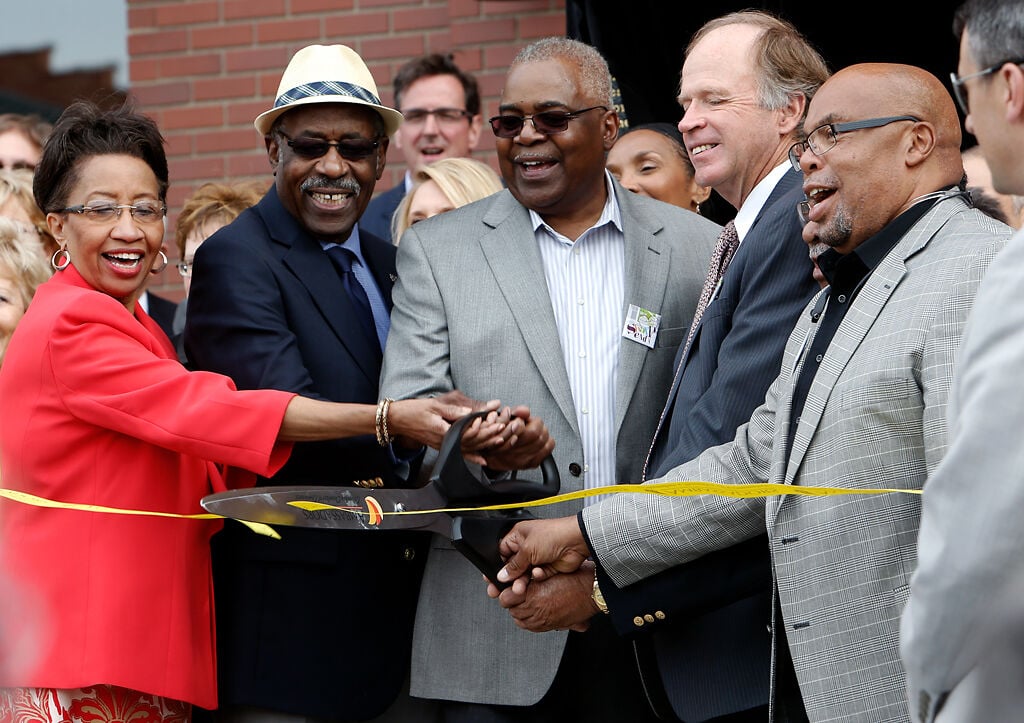 Sharp End Heritage Committee members, from left, Barbra A.B. Horrell, Larry Monroe, James Whitt, Mayor Bob McDavid and James Grey, cut a ribbon May 19, 2015, at the Sharp End dedication ceremony in Columbia. Sharp End, located on Walnut Street between Fifth and Sixth streets, used to be a historically Black community until many of the buildings were torn down in 1959.

The completed African American Heritage Trail was officially opened to the public Thursday with 22 markers that chart the history of Columbia’s Black community.

The Sharp End Heritage Committee organized a virtual dedication ceremony at 11:30 a.m. that unveiled the latest marker, eventually to be placed in Flat Branch Park.

Five years in the making, the trail is designed to be an educational tool that showcases the rich role of downtown Black neighborhoods in shaping the city.

“We felt it really important that the greater community of Columbia really understood this part of its past and make it a permanent part of our history,” said Jim Whitt, chair of the Sharp End Heritage Committee.

The committee plans to add at least two more markers in 2021, he said.

The last five years were spent researching the sites and stories to feature on the trail, as well as raising funds for the markers themselves. The original plan included 10 sites, but the scope of the project expanded as it gathered more interest and underwriters.

“We were quickly blown away,” said Vicki Russell, committee vice chair. “We had no idea at the outset how much enthusiastic support we would receive. In the end, we were able to pay for markers for everything on our original list — plus a few more.”

She called the trail “among the most comprehensive of its type in Missouri, if not the nation.”

The two biggest collaborators were the city’s Parks and Recreation Department and Regional Economic Development Inc., or REDI. Other local businesses and organizations also donated funds for individual markers.

The trail revolves around the Sharp End, an area in downtown Columbia between Fifth and Sixth streets on Walnut, near the location of the U.S. Post Office.

Sharp End was thriving in the early 20th century as the heart of Columbia’s Black community. Between 1910 and 1940, it was home to a collection of Black-owned shops, bars and restaurants, mostly along Walnut Street.

One stop on the trail marks three locations that were central to the community from the 1930s onward: the Third Street Market, the Blue & White Café and the Harvey House.

Located in the same building on the west side of Third Street, the market provided household goods, while the cafe served hot dogs and hamburgers, often a favorite among local students. After 5 p.m., the cafe became an adults-only juke joint.

The marker also honors the Harvey House, which once stood at 417 N. Third St. and served residents, as well as travelers. It was one of the few places to offer safe housing for Black people moving through Columbia.

During the 1950s and ’60s, the buildings were torn down in a flurry of urban renewal. For two decades or so, Sharp End was seen as prime real estate for the growing city, so huge swathes of businesses and buildings were purchased and razed to make way for post offices, public safety facilities and schools.

This essentially erased the heart of Columbia’s Black neighborhoods, Whitt said, and much of the Sharp End history has been largely undocumented. Whitt has long believed it important to elevate these stories and educate people about the full history of Columbia.

“What happened during urban renewal really left a bad taste in the minds of Black folks who grew up here,” Whitt said. “It’s something that needs to be recognized, so that when we look at moving forward into the future, we won’t repeat the same mistakes we made in the past.”

Each black metal marker on the trail highlights a person or place from Columbia’s Black history in gold letters. One notable stop is the Annie Fisher marker on Seventh Street and Park Avenue. Fisher made a fortune selling beaten biscuits, making her among of wealthiest Black people in town.

Another stop on Fourth Street between Walnut and Broadway honors the historic home of jazz pianist John William “Blind” Boone, known internationally for his ragtime songs and performances. The storied house now acts as a community center, preserving Boone’s legacy of music and community. This marker also highlights the Second Missionary Baptist Church, founded in 1894.

“During the early 20th century, the buildings at Fourth and Broadway provided a space where faith, music and community converged,” the marker reads.

While the committee had planned to have a large outdoor celebration to dedicate the newest marker, they had to settle Thursday for an indoor ceremony streamed over Facebook, complete with a ceremonial ribbon cutting. The event ended with a video preview of stops along the trail.

The committee is now partnering with multiple organizations to spread the message about the trail. Schools will be supplied with brochures that include a map of the markers. For the more tech-savvy user, the Sharp End Heritage Committee worked with a company called Otocast to bring Columbia’s Black history to a smartphone app.

Otocast not only uses the phone’s GPS to help users navigate the many stops on the trail, but it also provides historical pictures and writing to each stop, essentially acting as a guided tour through the trail.