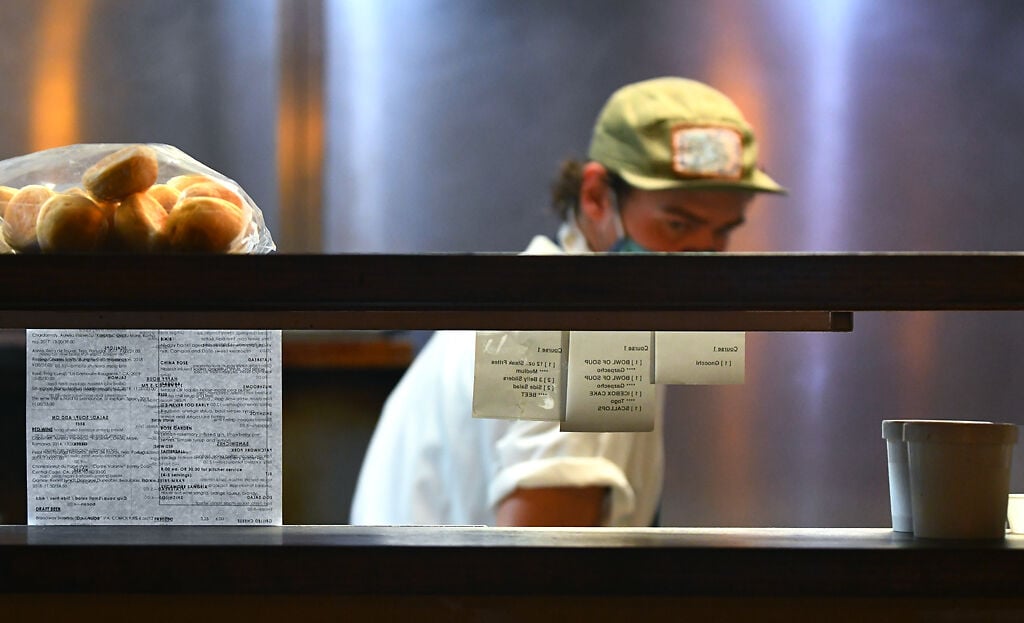 Brian Doss turns to read an order receipt Tuesday in the kitchen at Sycamore Restaurant. 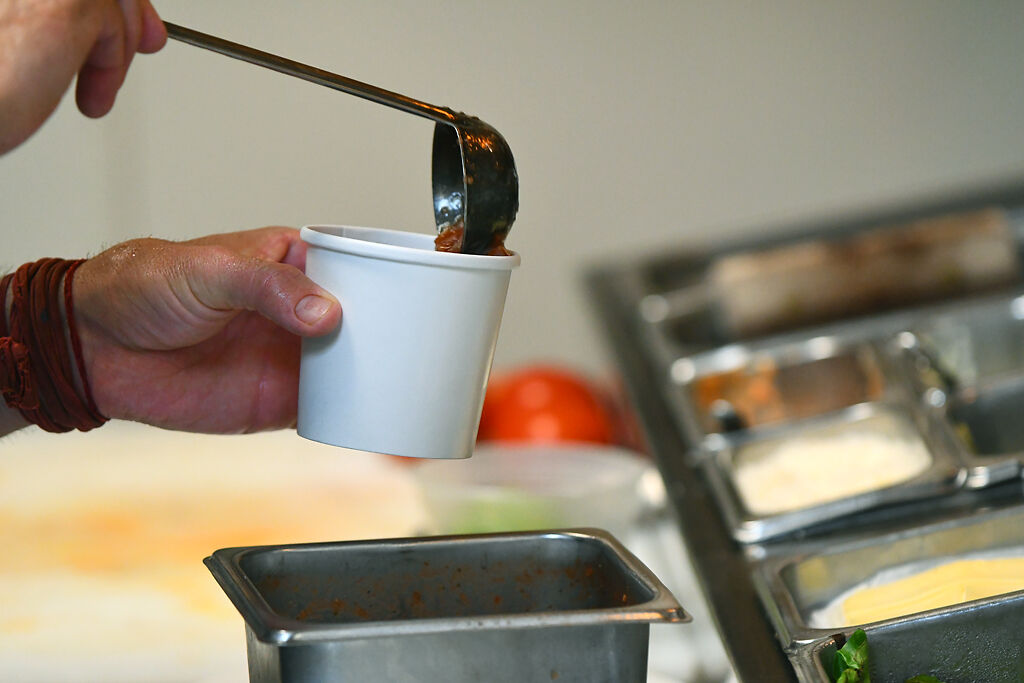 Brian Doss ladles sauce into a bowl for a takeout order Tuesday at Sycamore Restaurant. Many restaurants and bars have relied on takeout and delivery orders to maintain income throughout the virus pandemic. 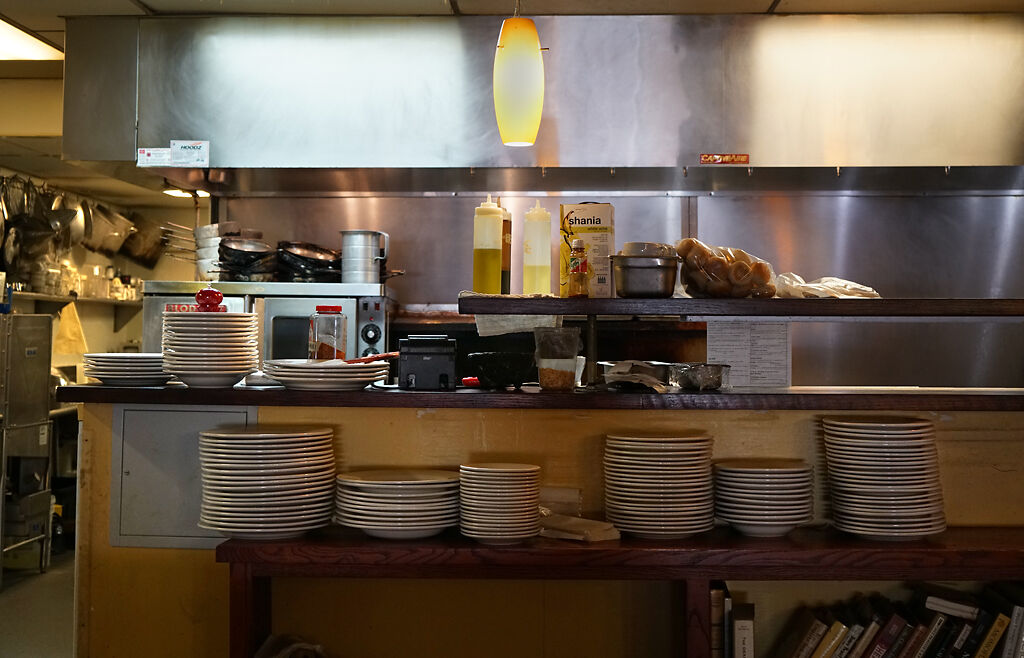 The kitchen of Sycamore Restaurant is photographed Tuesday. The restaurant has relied heavily on takeout orders due to COVID-19. Michaela Cash, front-of-house manager Sycamore is developing new, creative recipes that are made to travel well for to-go customers. 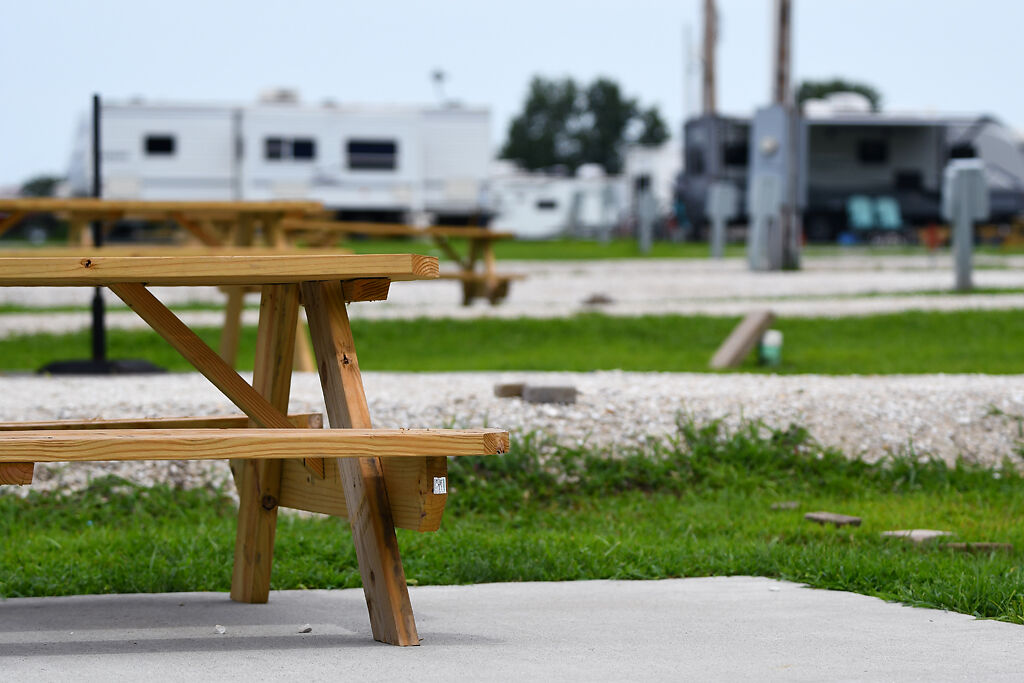 Benches sit Tuesday at the Cedar Creek Resort & RV Park. Business has been doing very well this summer at Cedar Creek as families look for safe ways to get away.

Brian Doss turns to read an order receipt Tuesday in the kitchen at Sycamore Restaurant.

Brian Doss ladles sauce into a bowl for a takeout order Tuesday at Sycamore Restaurant. Many restaurants and bars have relied on takeout and delivery orders to maintain income throughout the virus pandemic.

The kitchen of Sycamore Restaurant is photographed Tuesday. The restaurant has relied heavily on takeout orders due to COVID-19. Michaela Cash, front-of-house manager Sycamore is developing new, creative recipes that are made to travel well for to-go customers.

Benches sit Tuesday at the Cedar Creek Resort & RV Park. Business has been doing very well this summer at Cedar Creek as families look for safe ways to get away.

As expected, the pandemic has taken its toll on dozens of businesses in Columbia, but it has also been a lifeline for some.

The entertainment industry, including movies, concert spaces and party venues, has perhaps taken the hardest hit, as it has elsewhere in the country.

Restaurants and bars have struggled because of COVID-19 restrictions, though many pushed through by relying on takeout, delivery and their own creativity — pivoting to hand sanitizer, for example.

“Locally owned retail stores, restaurants and anyone in the hospitality industry have been hit really hard,” said Matt McCormick, president of the Columbia Chamber of Commerce.

On the other hand, some businesses — notably cleaning services, campgrounds and RV parks, home renovators, greenhouses and supermarkets — found success filling a niche for families confined because of the COVID-19 limitations.

Supermarket sales, for example, shot up 29.3% in March, compared to March 2019, as consumers stocked up in response to the coronavirus outbreak, according to data from the Census Bureau.

Sales of household supplies were up 63% during the four-week period that ended April 4, compared to the previous year. Sales of meat and frozen food gained almost 60%.

Christopher Otrok, economics professor at MU, forecast a continued but undetermined impact, based on the unpredictable nature the pandemic.

“The longer this goes on, the more firms are going to go out of business, which is going to put people out of work, and just make the process of recovery longer,” Otrok said.

Entertainment: The entertainment industry is normally booming during the summer, when families want to get out and explore Columbia, but the pandemic confined many to their homes.

Ragtag Cinema on Hitt Street is getting only 1% or 2% of its normal capacity, said Stacie Pottinger, director of development and communication. Ragtag closed March 17 and reopened June 18 with classic films.

“There are only about 15 art-house cinemas open in the whole country, and we are one of them,” Pottinger said.

“So, we were definitely on the earlier side of opening, but we are following all the protocol+s to keep our customers safe.”

Sky Zone Trampoline Park General Manager Aaron Kincaid had to close the doors at the park in north Columbia for at least two months once the pandemic hit in March.

“With us being a trampoline park, we didn’t have any curbside pickup or anything, so went from sales to no sales at all,” Kincaid said.

According to Kincaid, the number of visitors now is down 50% from last year .

“A lot of people are scared, and rightfully so, but our trampolines are 6 feet apart,” he said. “We have reduced capacity, and we added a new position, called ‘the cleanser,’ that cleans the facility all day long, so it truly is safe and clean for customers.”

Level Up Entertainment, a bowling and arcade game venue in the Columbia Mall, has gone from hosting around 20 birthday parties a week to the occasional one. However, according to owner Nic Parks, a little business is better than nothing.

“I would rather have a fraction of the staff and pay my bills and keep people employed than just be closed,” Parks said. “I don’t like being labeled ‘bad’ or ‘not necessary.’”

“We Always Swing” Jazz Series, a local nonprofit with the mission to promote jazz performances, had to cancel its in-person concert season in mid-March and lost much of its fundraising opportunity.

“People that put on live events with a bunch of people are really swimming way out in the deep end right now,” said Josh Chittum, assistant director of the jazz series . “There were approximately $40,000 in unsold tickets to shows. Obviously, that is money we can’t get because you can’t sell tickets to a canceled show.”

April is Jazz Appreciation Month, when the series raises a great deal of its funding, but the pandemic interrupted that.

“It is hard to put a number on the exact amount of money that we didn’t get because of not getting Jazz Appreciation Month, but at bare minimum, a few thousand dollars,” Chittum said. “As a nonprofit that doesn’t have a huge budget, that adds up quickly. “

The jazz series has been livestreaming concerts with musicians, which has not only brought in a small amount of money but also provided a platform to continue its mission to promote jazz and “make people happy through music,” Chittum said.

Food and drink: According to the National Restaurant Association, between March and June, eating and drinking establishments nationwide were down more than $116 billion from expected levels.

To-go orders became the crutch many local restaurants leaned on during the pandemic, allowing them to serve customers with limited contact.

“A lot people did takeout with us anyway (before the pandemic), but it really increased once regulations were put in place,” said Kalle LeMone, co-owner of Nourish Café and Market.

For a specialty restaurant like Sycamore on East Broadway, relying on to-go customers has been challenging.

“The change toward to-go food has been a tremendous change for us,” said Michaela Cash, front-of-house manager. “We’ve had to ask ‘How do we get elevated food to people, being a chef-driven restaurant, while still catering to everyone?’”

Cash said the restaurant is creating new recipes that are made to travel well for to-go customers. For example, Cash points to the Nicoise salad, which was recently featured on the menu.

“It is new and interesting and something that we may not be leaning toward if we weren’t thinking about factors such as how to get elevated food to people at home, rather than in-house,” Cash said.

“If you were to put ‘positive outcome’ and ‘restaurant’ together, you wouldn’t be able to find much there,” Cash said. “Small successes are what is keeping restaurants going in one of the hardest industries hit.”

Across town at Peggy Jean’s Pies, however, where the products are truly portable, sales have been “astronomical,” said co-owner Rebecca Miller. She believes it’s also because pie is comforting.

“I think a lot of people are saying ‘I just needed this; I just need a little something,’” Miller said.

“We were able to pay the light bill, pay the rent, keep the staff employed, and it ultimately gave us a purpose,” Hawxby said. “We just took a step to the left and plugged ahead.”

March and April are months that Tropical Liqueurs normally begins to see its biggest jump in revenue; warm weather attracts customers wanting a frozen beverage. But when the pandemic made its surge during mid-March, business was stalled at its downtown and south locations.

“We were closed for six weeks at both locations in town,” owner Alan Dodds said. “You’re not getting that back; that is a lot of revenue out the door.”

Dodds said year-to-date sales are down quite a bit, but he is continuing to purchase supplies and tools to make his customers feel safe when they come in.

“Whether the government mandates it or not, if you’re doing the stuff that makes people feel safe, they will come back,” Dodds said. “If you’re not, they aren’t going to.”

Light in the tunnel: Cedar Creek Resort & RV Park, located in east Columbia, has been twice as busy as normal. Owner Linda Ordway said she has never seen anything like it before.

“We are busier than I ever expected us to be,” Ordway said. “To have this level of success in less than two years, where the profit margins are where they are, is amazing.”

Cleaning and disinfecting businesses have also seen an upswing.

“We help give (people) assurance that we are hopefully keeping (COVID-19) out of their place of residency and facility,” Jackson said.

“It is not about the money; it is about us being a blessing to people,” Jackson said. “During this hard time for everybody, if I can participate in keeping people safe and doing my part, then it’s a win-win for me.”

Columbia greenhouses also experienced a boost in sales during the spring, according to previous Missourian reporting.

Allie Henneke, media coordinator for Superior Garden Center, told the Missourian in June that she estimates sales were up 30% this year and called it a “great season.”

Any business could be on a roller coaster this fall and winter, and Parks of Level Up noted the importance of supporting local businesses for the long haul.

“What makes Columbia great is not because we have a Walmart, Target or McDonald’s,” Parks said. “We have all of these home-grown, locally owned businesses … all of those places that are struggling right now, and we can’t lose those.

“Those are the lifeblood of our community.”

Fundraisers have been canceled since March, impacting the ability of an organization to operate at full speed and help the community.