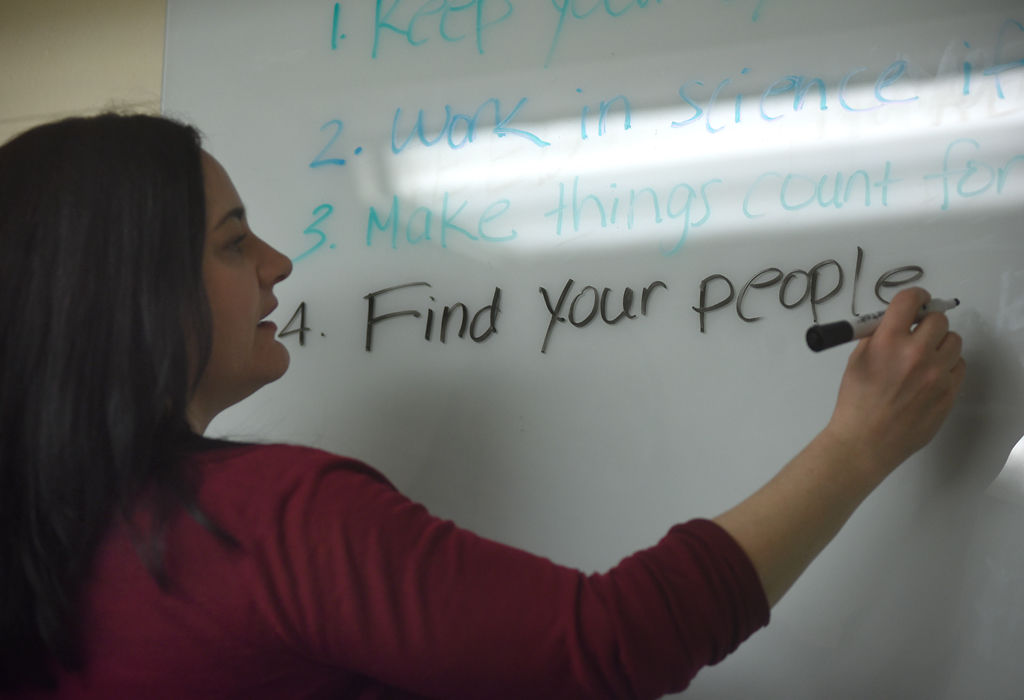 With her research team, Tina Bloom, a professor of nursing, developed a smartphone app to help assess the danger level in abusive relationships. 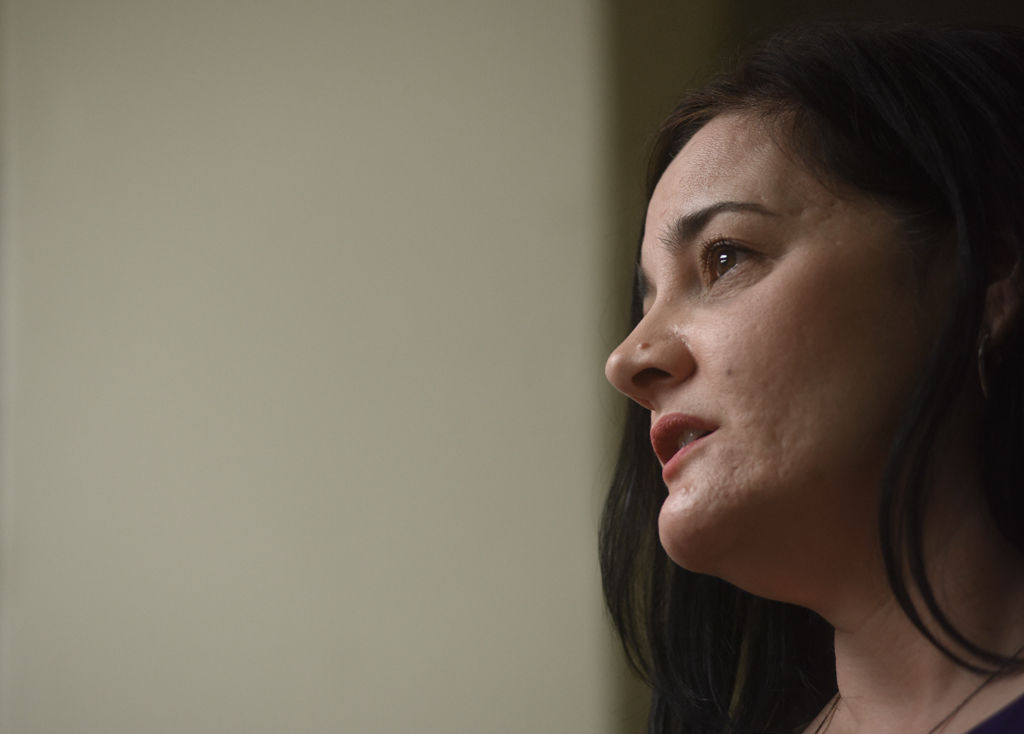 MU Sinclair School of Nursing professor Tina Bloom has researched domestic and sexual abuse for more than 17 years. As the investigation into Gov. Eric Greitens has unfolded, the special House Committee for his case and many following the coverage have questioned what constitutes consent and why victims don’t avoid their abusers or end the relationship. Bloom says the confusion is not unusual, but inconsistent behavior exhibited by perpetrators makes ending a relationship difficult for victims.

With her research team, Tina Bloom, a professor of nursing, developed a smartphone app to help assess the danger level in abusive relationships.

MU Sinclair School of Nursing professor Tina Bloom has researched domestic and sexual abuse for more than 17 years. As the investigation into Gov. Eric Greitens has unfolded, the special House Committee for his case and many following the coverage have questioned what constitutes consent and why victims don’t avoid their abusers or end the relationship. Bloom says the confusion is not unusual, but inconsistent behavior exhibited by perpetrators makes ending a relationship difficult for victims.

A framed copy of an email sits on a shelf in Dr. Tina Bloom’s office. The message is from an anonymous domestic abuse victim, thanking Bloom and her research team for saving her life.

The woman was in a dangerous relationship, but a smartphone app developed by Bloom and her team gave the woman a chance to escape.

“This is one of my prized possessions,” Bloom said about the email. “That’s the kind of thing that keeps me going.”

Bloom is an associate professor of nursing at MU. She and her team helped produce an app for victims of intimate partner violence. It started as a computer program, became a website and then evolved into a smartphone application called myPlan.

The mobile app is a decision tool that helps women in abusive relationships assess the danger they are in and create a personal safety plan. The app also provides resources and information for its users.

A woman can download the app, for example, and take a danger-assessment test to determine whether a relationship is healthy or not. The app can help her find contacts to evaluate abusive situations and find safe places to stay.

It can also help those women who decide to remain in a relationship but need a collection of emergency resources like child care, medical records and legal advice.

“It gives the user a chance to weigh competing priorities, think about what’s important and develop a plan to increase their safety,” Bloom said. “It’s very individualized and tailored.”

The original laptop-based program was created in 2010 by Nancy Glass, a professor at the Johns Hopkins University School of Nursing. While working with women in abusive relationships, Glass realized that the amount of information they needed was overwhelming.

Tailoring the information to specific situations seemed an important step to streamline the process, Glass said, “because we were in a situation where we were just trying to get them some help, any help.”

She also knew many women never access shelters or formal services because of fear , stigma or another reason. To address the problem, myPlan was born.

“We wanted to develop something that would be user-friendly, accessible, free — but also secure and confidential,” Glass said.

That way, app users could think through priorities and assess how dangerous the relationship might be. An algorithm based on decision science could then provide an action plan.

The app was tested in a randomized controlled trial of 720 women, looking at how it improved their ability to make smart decisions about their safety.

In studies conducted about myPlan, women reported having less decisional conflict after just one use. They were also able to take safety precautions more effectively and were more likely to have left an abuser.

After participating in the controlled trial, a number of women offered personal testimonials about the effectiveness of myPlan.

“I really don’t think I would have had the courage to change my circumstances if it was not for the app,” said one user.

“Thank you for opening my eyes to the right type of relationship I need to be in and not the hurtful relationship I have been in,” said another. “I have left my ex and have had no contact with him in a while. I’m eternally grateful for this.”

MyPlan has since expanded to an international audience. Versions in Canada, Australia and New Zealand have been developed, and models are underway for Kenya, China, Somalia, Ghana and Thailand.

Bloom said she originally struggled with the idea of using an intervention that was not face to face, and she worried about its effectiveness.

“They’re already isolated,” she said about those affected by domestic abuse, and many women are afraid to talk about it.

“The thing about relationship violence is that there’s so much shame and fear and stigma and difficulty talking about it that the vast majority of women never call a hotline or a shelter.”

But Bloom changed her mind when she saw the results.

“Because women respond so favorably to it and find it useful, I think it’s a great intervention,” she said.

She also discovered that the impersonal nature of an app has an appeal. Glass agreed.

“Women have said to us that it’s a non-judgmental tool,” Glass said. “They don’t feel judged. It’s private, they can look at it, they can use it, they don’t have to talk to someone and they can get that information.”

MyPlan can help survivors privately learn more about available resources on their campus or community, Glass said. But the app is not a replacement for professional support from advocates, health care providers and counselors.

The information on the app can also be directed specifically to college women, Spanish speakers, pregnant women and those in same-sex relationships.

“There are distinct groups of women and men in our society that need different resources, and we need to be able to adapt it to be useful to them,” Glass said.

Bloom said the current focus is to get the word out to college campuses. Women ages 18 to 24 experience the highest rates of relationship violence, she said.

Bloom hopes college women will find and download the app to give them tools to evaluate a relationship, even if they don’t consider it abusive.

The myPlan app can also be used by friends and family members. It not only helps educate them about relationship violence and how to spot it, but also how to bring up the subject. There are even scripts to shape a conversation about abuse.

True North, a domestic abuse shelter in Columbia, has been encouraging women to use myPlan for about a year. Elizabeth Herrera, the executive director, said the shelter has already seen its benefits.

“It’s very intelligently developed in that it’s not obvious that it’s a safety planning application, but that’s essentially what it is,” Herrera said.

Raisman spoke at the Missouri Theatre to an audience of hundreds about the importance of self-care, sexual assault awareness and her career as a gymnast.