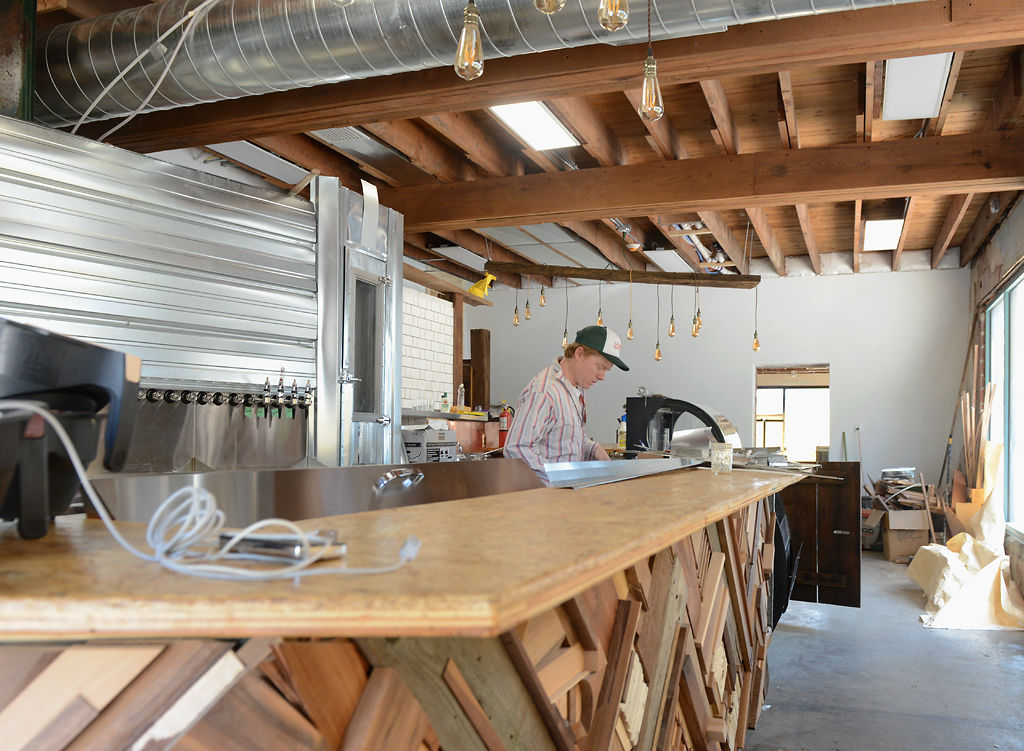 ABOVE: Josh Wexler decorates the interior of DrinKraft, a new kombucha bar. The cafe is located at the corner of 10th Street and Park Avenue. DrinKraft will feature a mini-maker space in one of the rooms where kids and adults can be creative and build or design things. The mini-maker space also will feature a 3D printer. Wexler’s goal is to get people excited about things that interest them. RIGHT: Josh Wexler screws a piece of metal to the outside of a refrigerator at DrinKraft. 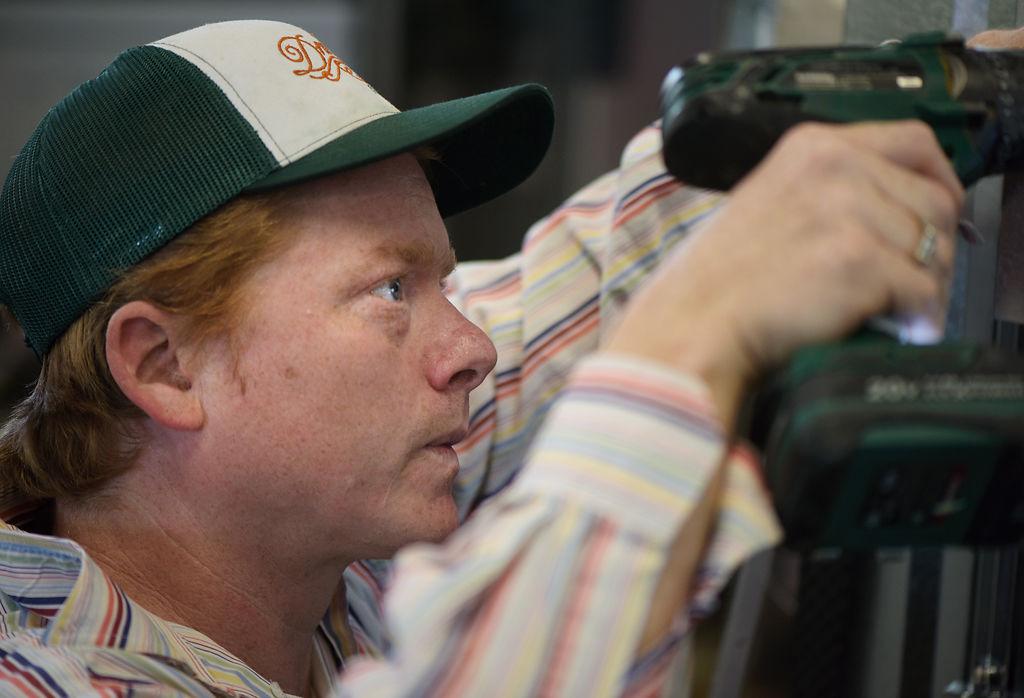 Josh Wexler screws a piece of metal to the outside of a refrigerator at DrinKraft on the corner of Tenth Street and Park Avenue. 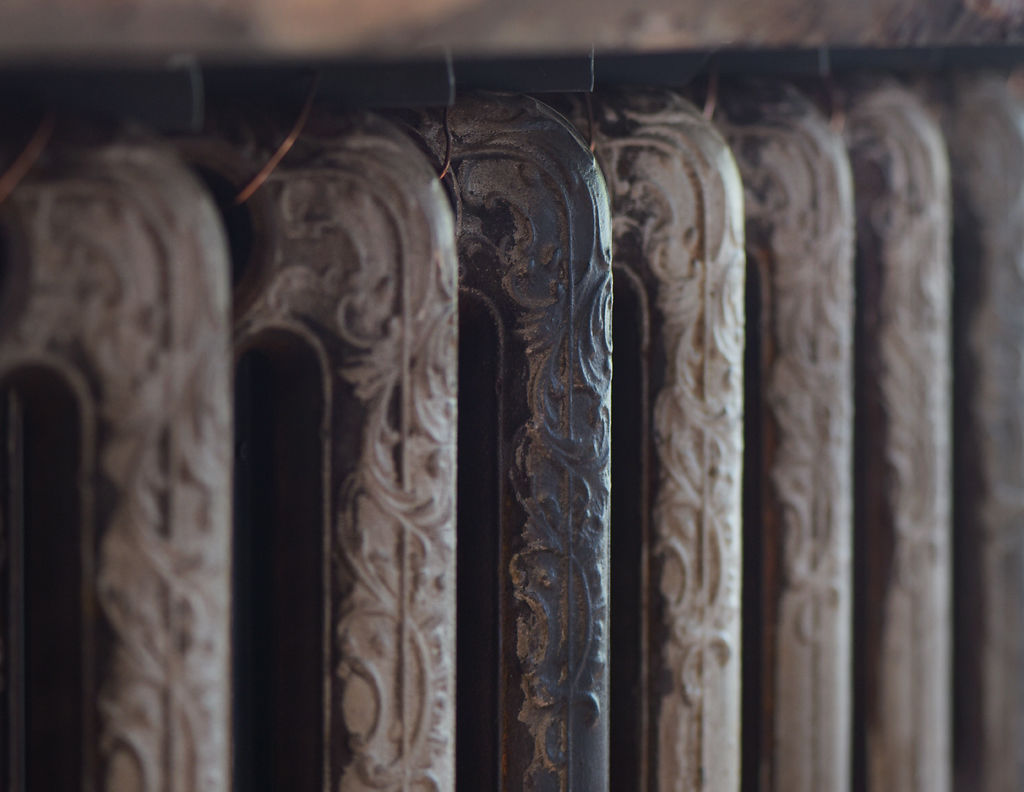 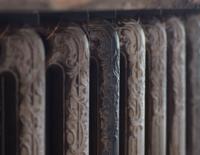 ABOVE: Josh Wexler decorates the interior of DrinKraft, a new kombucha bar. The cafe is located at the corner of 10th Street and Park Avenue. DrinKraft will feature a mini-maker space in one of the rooms where kids and adults can be creative and build or design things. The mini-maker space also will feature a 3D printer. Wexler’s goal is to get people excited about things that interest them. RIGHT: Josh Wexler screws a piece of metal to the outside of a refrigerator at DrinKraft.

Josh Wexler screws a piece of metal to the outside of a refrigerator at DrinKraft on the corner of Tenth Street and Park Avenue.

Columbia locals are keeping the city’s history alive by incorporating architectural artifacts gleaned from local buildings into their homes and businesses.

Many of the items were collected by the Historic Preservation Commission, a group that encourages preservation, restoration and rehabilitation of historic Columbia structures. When the homes and buildings are destined for demolition, commission members and volunteers go through them to save pieces of history, work with the owners to reduce the amount of material going to the landfill, and preserve whatever they can.

The James Condominiums used to stand at 121 S. Tenth Street downtown, and was the Elks Lodge before it became an apartment building. The brick structure was demolished in 2016 to make way for The Rise apartment building, but the Historic Preservation Commission saved a few pieces first.

Similarly, the Bull Pen Café was a Business Loop 70 restaurant adjacent to a livestock auction barn and was open for 60 years before closing in 2007. Ten years later, the commission salvaged stadium seating from the sale ring and barn wood planks from the office.

“When we salvaged the bull pen sale ring, we found several items that we thought were indicative of the agricultural history of Boone County,” Historic Preservation Commission Chairwoman Pat Fowler said. The group collects and stores the historic items in a salvage barn and hosts an annual sale. Last year’s sale generated just over $1,000, which the city will use for future preservation activities, according to a memo to the Columbia City Council.

Josh Wexler will soon open a kombucha, tea and coffee tasting cafe called DrinKraft in a Quonset hut at the corner of Tenth Street and Park Avenue, and he filled the decor with Columbia’s history. He visited the commission’s sale in November with the intent of finding antique doors to decorate his shop, but said he instead came across other items he wanted to repurpose for the interior design of his building.

“Once I saw what they had, my mind kind of just started seeing things,” Wexler said, adding that he saw the sign for the sale just the day before it opened, so he didn’t have a plan when he went. “Then I saw those radiators, and I was like, ‘Those are so cool, I wonder if I can do something with that.’”

Fowler said the commission salvaged eight decorative radiators from the James Condominiums, and two are now being repurposed in DrinKraft’s upper level. Wexler took the coils apart and rearranged them to make a decorative wall on the face of the bar in the second story of his building. He said he thought at first that he would turn the coils flat and lay them side by side, but he decided to place them at an angle for a more eye-catching look.

Wexler also installed unique light fixtures from the James building in the cafe’s bathrooms. He said he stripped off the paint and wire-brushed them to accent the light fixtures’ antique look. The fixtures might have been centered over pool tables in the basement of the building when it was the Elks Lodge, Fowler said, adding that there were stories of members enjoying alcohol, cigars and billiards games in the building, particularly during Prohibition.

On the first floor, Wexler covered the face of another bar with hundreds of wooden pieces put together like a puzzle, which he said took about a week on and off to organize and place. Some pieces, including wood trim and window rosettes — decorative square pieces used join the corners of a window frame — also came from the James building.

Wexler also paneled the bottom half of the second floor walls with boards from the office of the bull pen sale ring. Wexler said he paid less than $100 for all the artifacts he used in his building.

Wexler said he likes the idea of using historic items as a way of fostering conversation among people in hopes they’ll find common ground.

Columbia resident Susan Maze lived in the James Condominiums in the early ’90s. She bought towel bars, metal hooks and holders from the salvage sale as a way of revisiting memories of her old room. She painted them a chrome color and installed them in the bathroom of her home, she said in an email.

“I wanted something to remember,” Maze said. “It was a great building with a lot of character.”

Maze also bought cabinets from the living room of one of the first-floor apartments, which she sanded and painted to match her remodeled bathroom. Now, they hold clothes and towels.

Fowler also bought items from the sale that she plans to use in her north-central Columbia home, which was built in 1910. She said she intends to restore the interior with the same floor plan, and she has three items from the commission’s salvage sale that are ready to be installed.

One of those items is an interior window from one of the James apartments that was used to let light enter from a hallway into an otherwise windowless kitchen. Fowler plans to install the window between her dining room and kitchen so that light from one side of the house can go both ways.

Fowler also has a vented door from the James building that she’ll place between her kitchen and laundry rooms. The door doesn’t extend all the way to the floor, a feature intended to allow better air flow before central air-conditioning was invented. It also gave James’ tenants privacy. In her home, Fowler will hang it flat against the wall and open it by sliding it to the left.

The Historic Preservation Commission also picked up quite a few plumbing access doors from the James Condominiums.

“They sold like hotcakes at our first sale,” Fowler said, and she bought one to use in her own home, too.

The Historic Preservation Commission will have its next salvage sale at 11 a.m. July 28 at Rock Quarry Park. Wexler plans to attend and find more items for DrinKraft. He likes it when a building keeps evolving and looks different with each visit.

“As a Historic Preservation Commission, we could not ask for a better example of the potential of the items that we salvage and that people buy to install in their homes, offices and places of business,” Fowler said about Wexler’s cafe. “He did that so beautifully.”

Salvage sale offers original finds and glimpses into Columbia's past

Bathtubs, a dough separator and rows of amphitheater seating were among the items for sale at the architectural salvage sale Saturday at Rock Quarry Park.