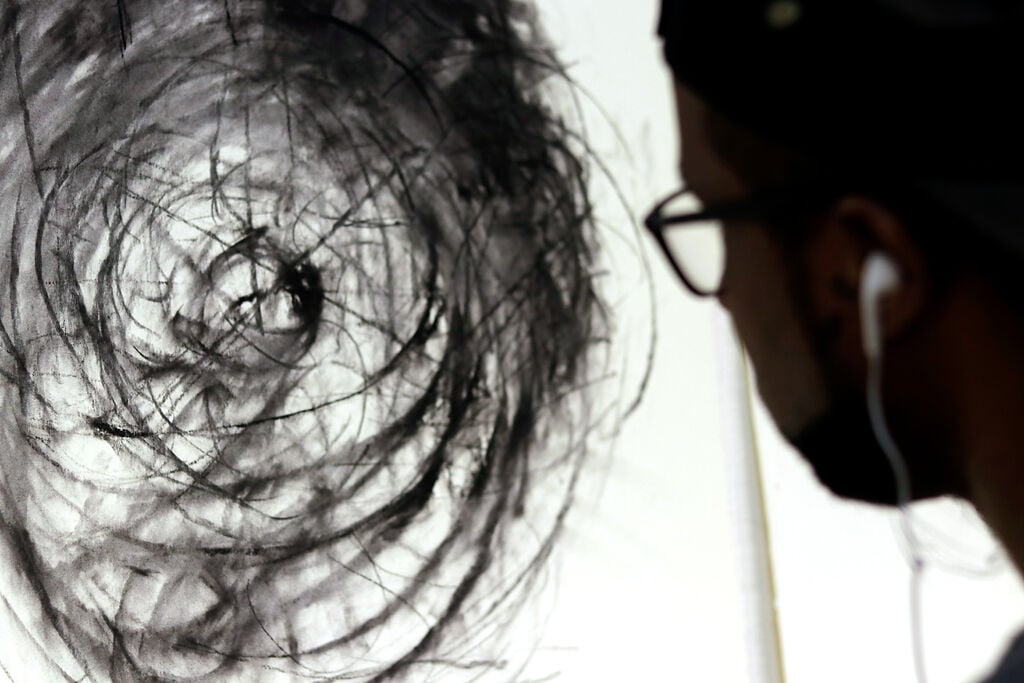 Askia Bilal works on a piece using pastels Feb. at Orr Street Studios in Columbia. "I'm trying to make a three-dimensional illusion of space, like a push between flat surface and depth," Bilal said. 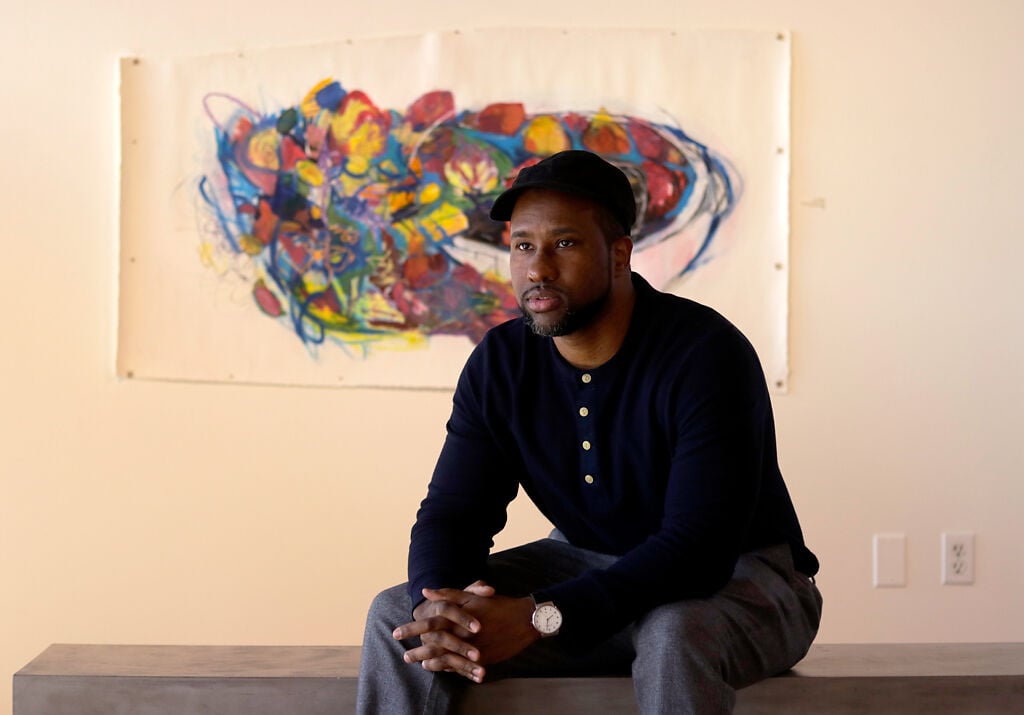 Askia Bilal sits in front of his piece “Flowers and a Bowl of Fruitish” on Feb. 5 at Sager Braudis Gallery in Columbia. “The path of the artist is usually not easy,” Bilal said. “I don’t think there is a guidebook on how it is to be pursued. However, if the impulse to express something is within a person, then I believe that person will find a way to do it.” 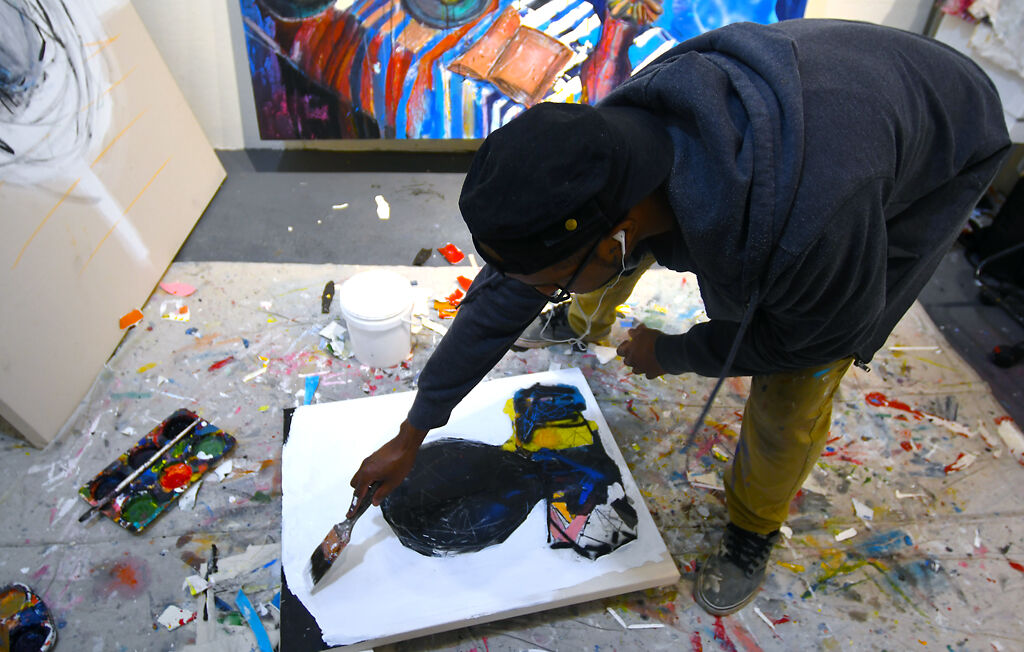 Askia Bilal creates a portrait Feb. 4 at Orr Street Studios in Columbia. Bilal has been interested in art since he was a child growing up in New York. He uses his art to make sense of the world. 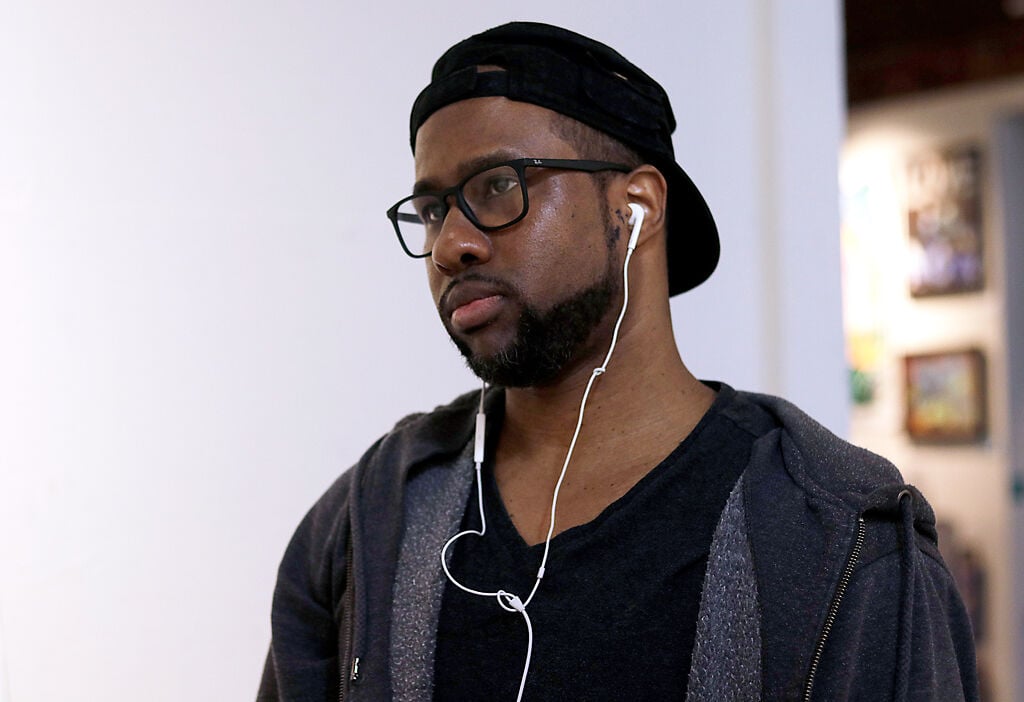 Askia Bilal examines his work in progress before moving on to another piece Feb. 4 at Orr Street Studios in Columbia. Bilal works on several pieces simultaneously, pulling inspiration from all of his artwork. "That's a part of the dialogue that happens between the pieces," Bilal said. 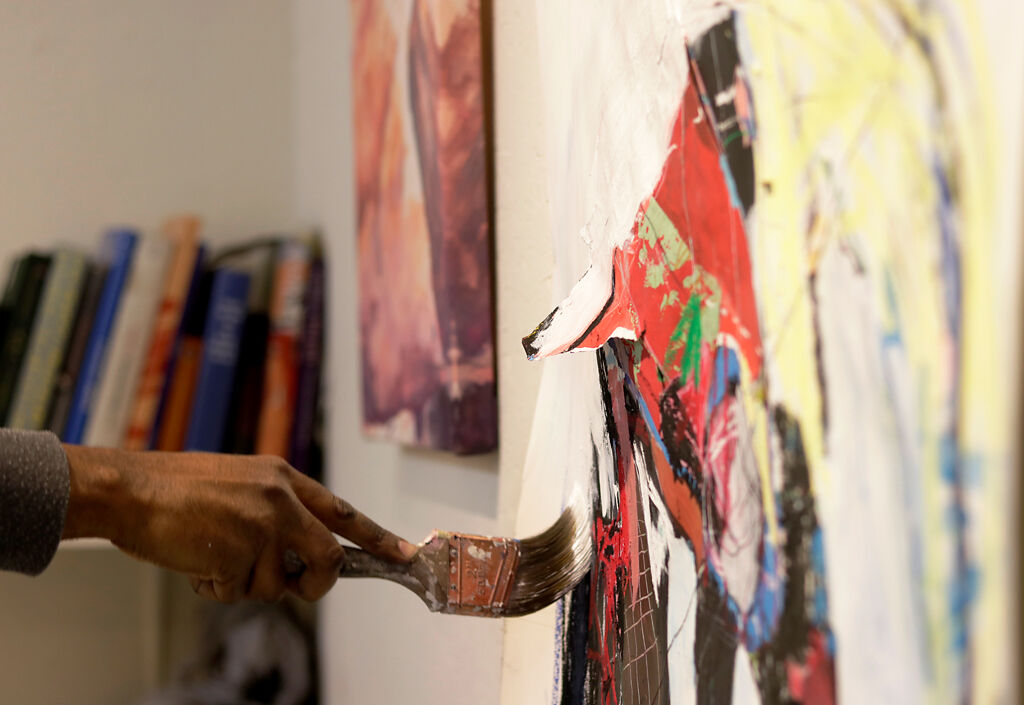 Askia Bilal paints using mixed media Feb. 4 at Orr Street Studios in Columbia. “I like to put a lot of stuff down, then I like to remove things,” Bilal said. “My process is also kind of a cycle. It’s different to add and remove than it is to not put it in the first place.” 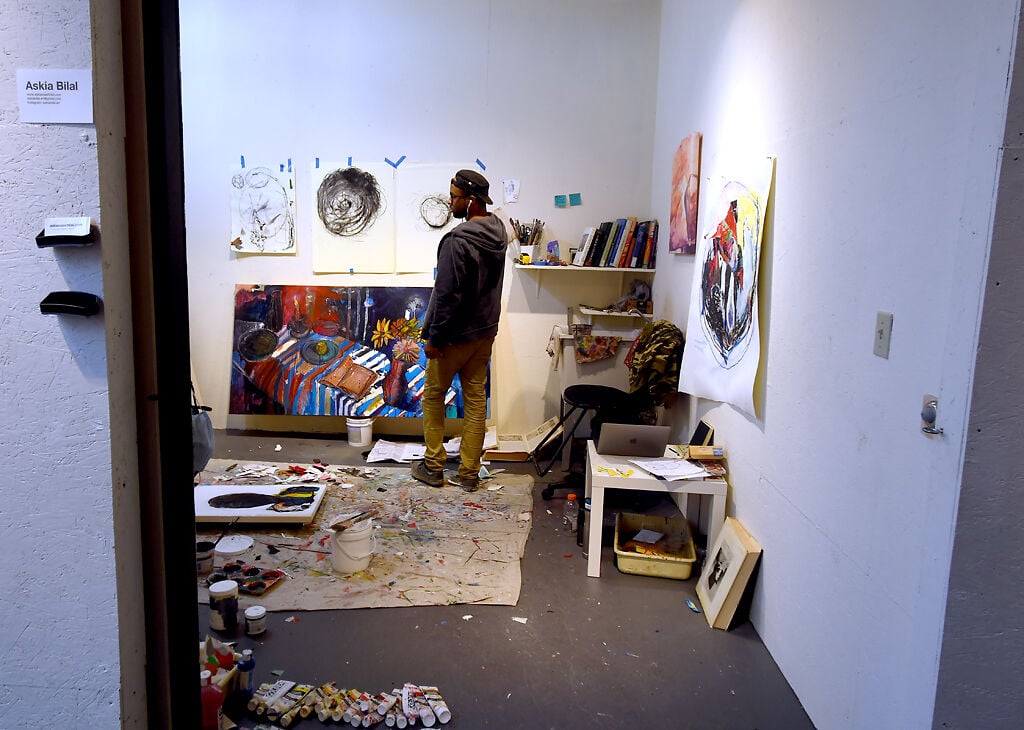 Local painter Askia Bilal creates artwork in his studio Feb. 4 at Orr Street Studios in Columbia. Bilal is apart of the Orr Street Black Artist in Residence Program, which gives him a studio rent-free for about a year to work on his art. 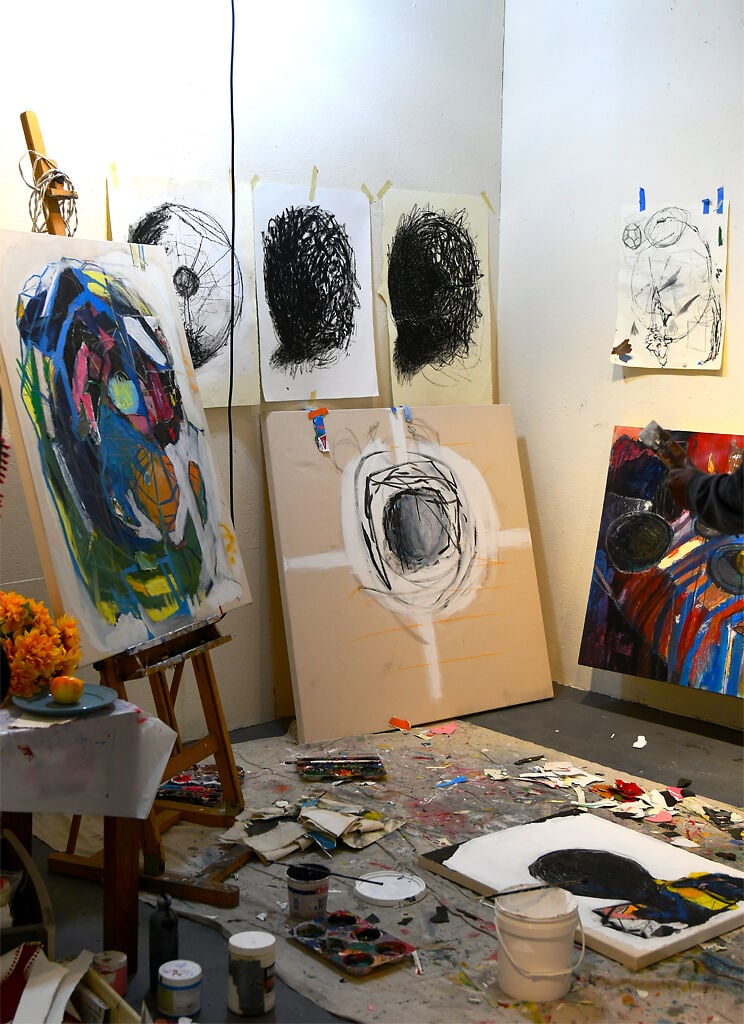 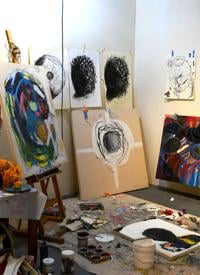 Askia Bilal's art studio stands cluttered with his art and tools Feb. 4 at Orr Street Studios in Columbia. "As an artist, it's an opportunity to have a space to work," Bilal said about his residency program. "Like before this, I worked at home in my garage. To have an actual environment for the way that I work is really nice; it gives me the motivation to work consistently." 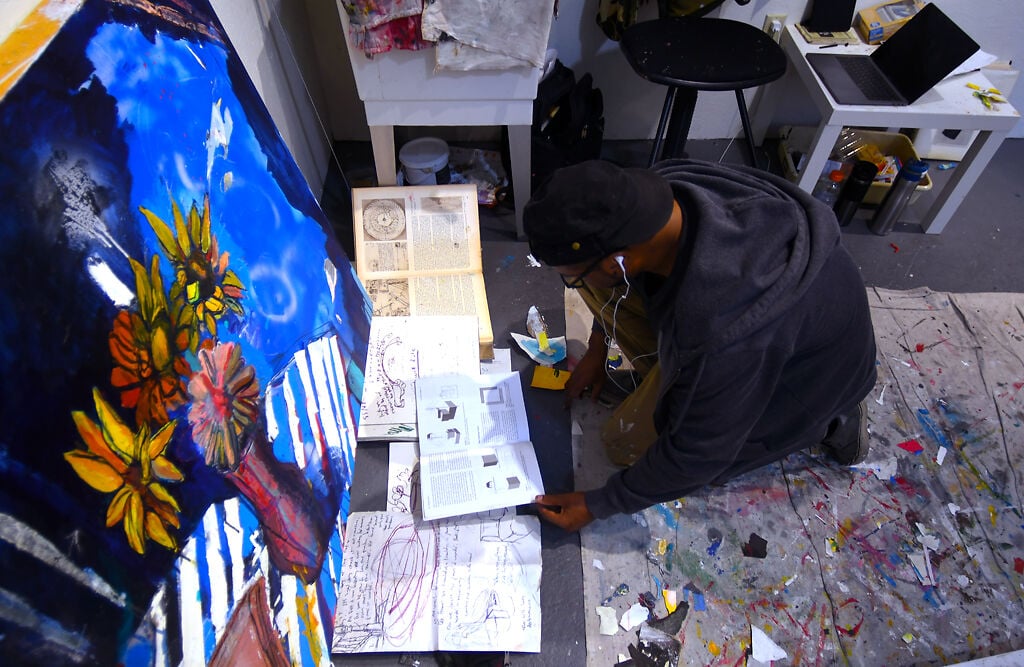 Askia Bilal reviews his notes about perspective Feb. 4 at Orr Street Studios in Columbia. "One of the themes in my show is about the the Wheel of Fortune, which is an old idea," Bilal said. "In general, that's like a cycle to me, people go up, they go down, you keep finding yourself in these different places."

*Askia Bilal is an instructor with MU's Asian Affairs Center. An earlier version of this article incorrectly identified Bilal's occupation.

Askia Bilal, *english language instructor at MU and graduate of Columbia College, has a language of his own when it comes to art. He takes inspiration from art history and philosophy when working to create his pieces. The New York City-born artist uses mixed media to create depth in his art.

As well as being a professor at MU, Bilal is part of the Orr Street Black Artist in Residence Program. The program gives local Black artists a dedicated art studio rent-free for about a year to improve their skills. According to the studio, this program is a step Orr Street Studios took to make the mid-Missouri art community more inclusive and available to artists who don’t see themselves represented in the local art scene.

“I think that it’s like a contribution to this dialogue that we’re having as a country and as a culture, as a society, I think is really important,” Bilal said. “As an artist, it’s an opportunity to have a space to work. Before this I worked at home in my garage. So to have an actual environment for the way that I work is really nice.”

With his space, Bilal has created an exhibit being shown at Sager Braudis Gallery, with the theme of “Wheel of Fortune.” He carries the theme of life cycles throughout his creative process into his work.

“I’m really interested in wheels, like the ‘Wheel of Fortune,’” Bilal said. “It’s like a cycle to me; people go up, they go down, you keep finding yourself in these different places, life and death, the seasons. All these things kind of rotate.”

His current gallery show is based on the imagery from the “wheel of fortune." Bilal said he uses the imagery to mimic how life cycles or breaking cycles look in his own life. In creating it, he mimicked the cycles of creation and destruction by putting ideas on a canvas and later covering it up with different types of media. Bilal continues through this cycle until he decides his piece is complete.

Bilal’s gallery featuring his Wheel of Fortune work is being shown until Feb. 27 at Sager Braudis Gallery, 1025 E. Walnut St.