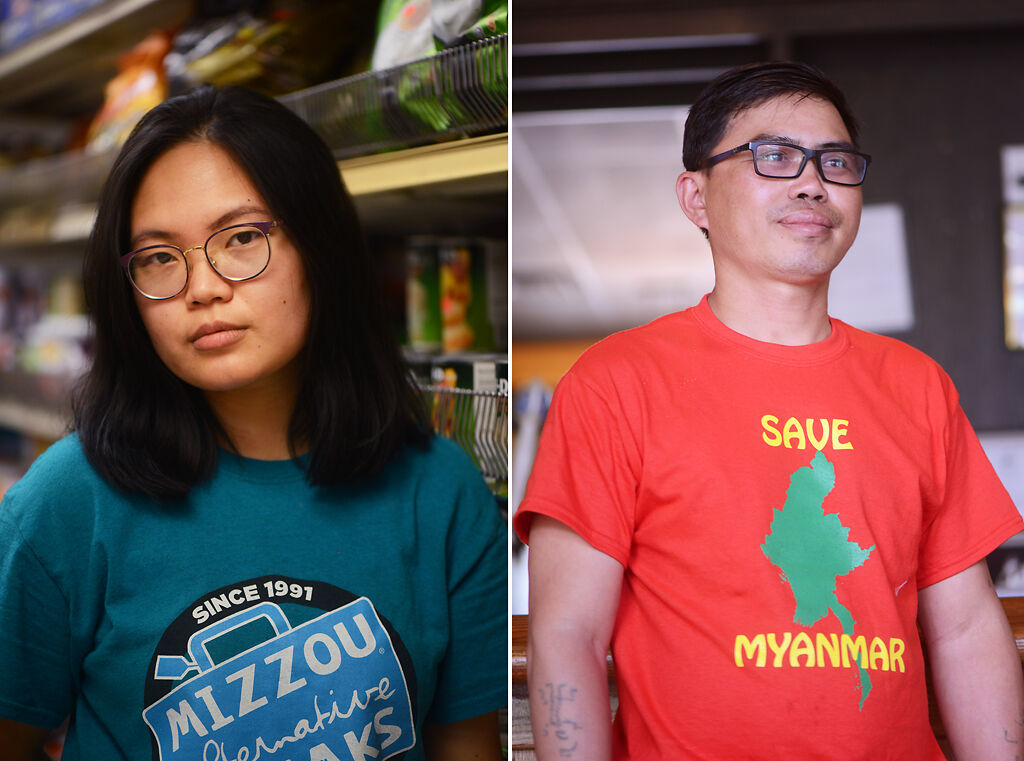 Left; Ma May Si stands for a portrait June 8, at Shwe Market International Foods in Columbia. Si is a senior at MU; her family arrived in the United States via Malaysia in 2009. Right: Sai Tai, the owner of the Thai-Burmese restaurant Tiger Chef, speaks Friday about running his business in Columbia. Tai is a refugee from Myanmar who opened his restaurant business two years ago. 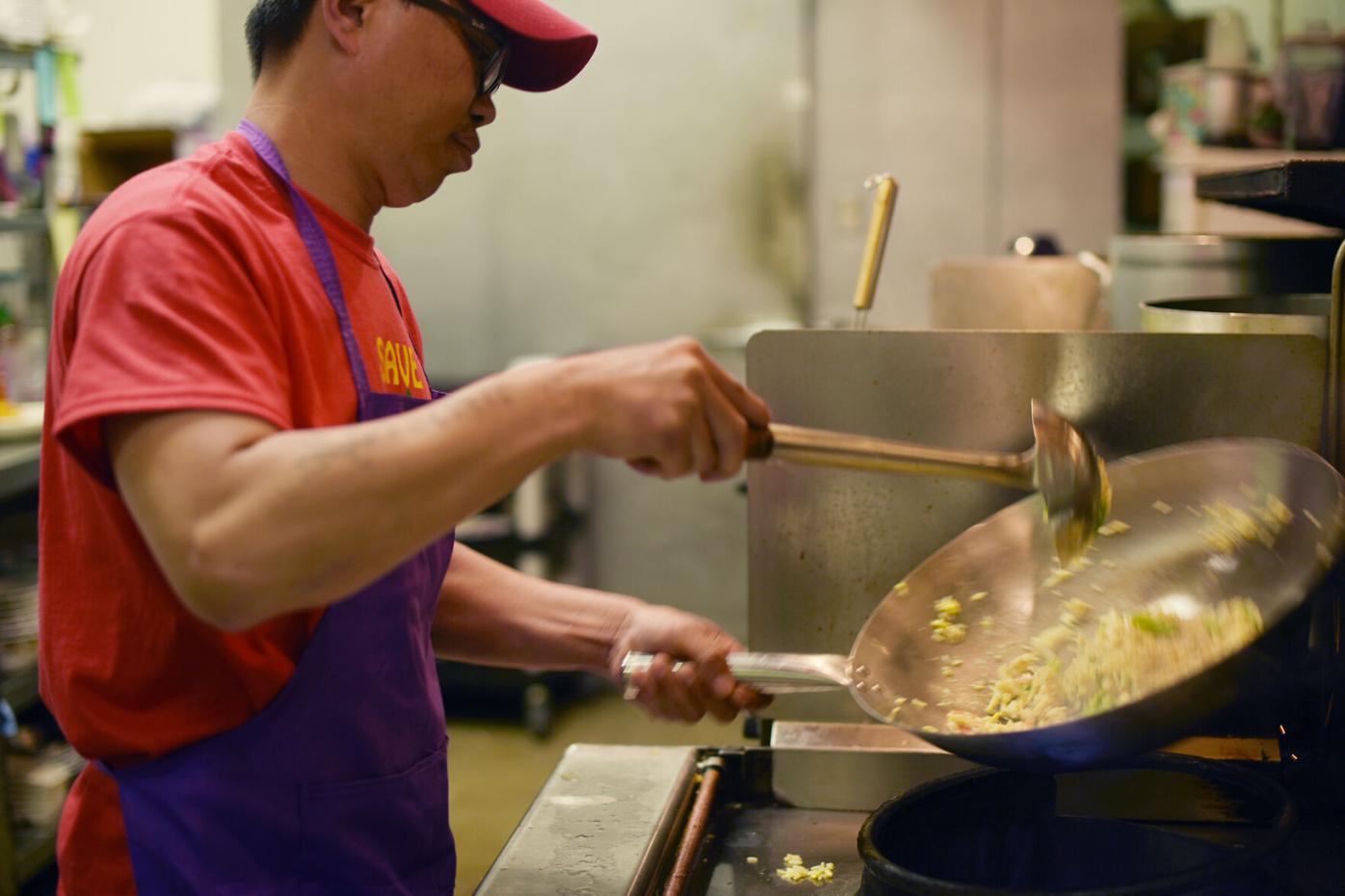 Sai Tai, a refugee from Myanmar, cooks fried rice in his restaurant, Tiger Chef, on Friday in Columbia. He had to move the business online during the COVID-19 pandemic.

Food products line the shelves at Shwe Market International Foods in Columbia. The market on Vandiver Drive is owned and operated by Myanmar refugee Soethu Hlamyo. 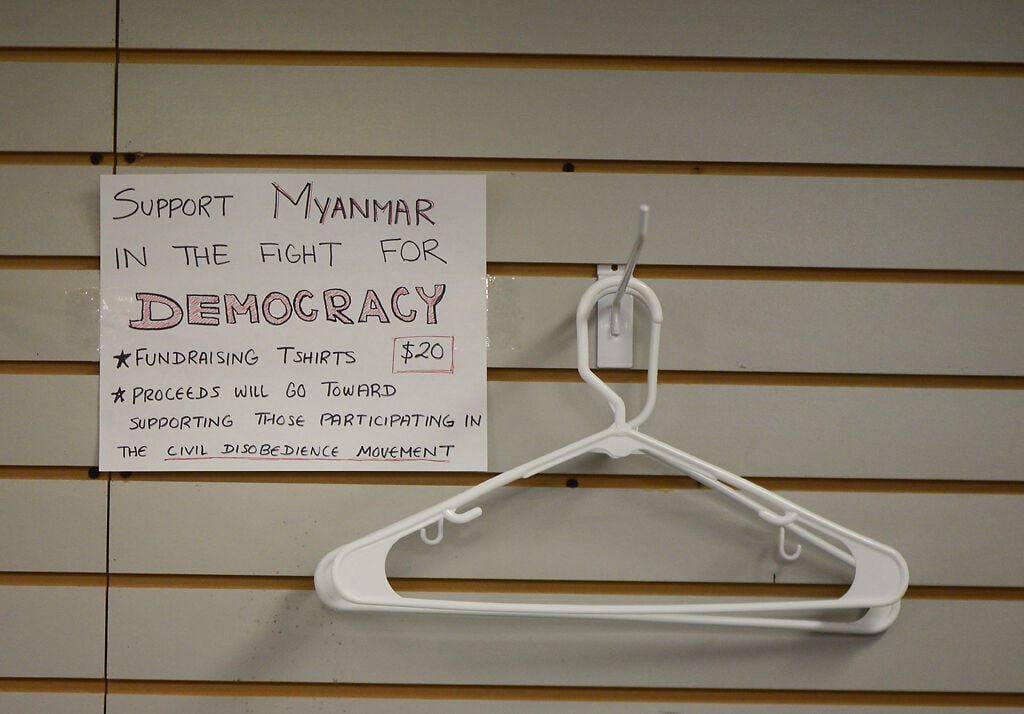 A sign selling shirts hangs next to an empty clothes hanger at Shwe Market International Foods in Columbia. The shirts raise money for those in Myanmar participating in a civil disobedience movement. 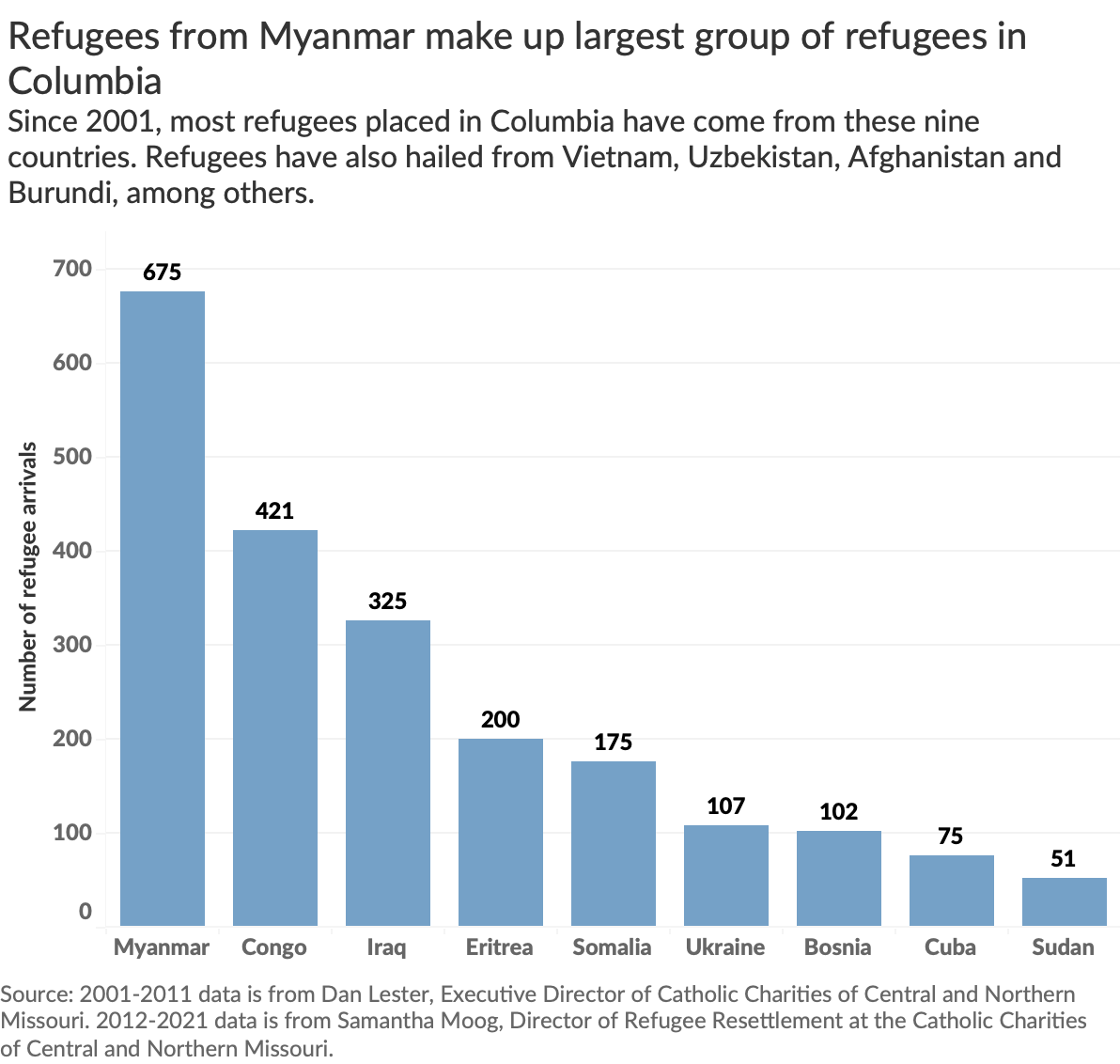 Columbia has a budding population of refugees arriving from Myanmar.

Earlier this month, Ma May Si sat on a stool in the back room of Shwe Market International Foods, a grocery store that specializes in Burmese and Southeast Asian food.

She described the journey she made with her mother in 2006 from Matupi, Myanmar, to Malaysia. They joined her father, who moved away when Si was just a year old so he could get work and support his family.

In Malaysia, Si said they were always afraid of deportation or jail. “People have to live in constant fear,” she said.

The family remained in Malaysia for two years before they gained refugee status and could come to the United States. They finally settled in Columbia in 2009.

Si’s journey is one that hundreds of refugees have made since 2001 from Myanmar to Columbia to escape the violence and upheaval of the world’s longest civil war.

The number of refugees from Myanmar has surged in the last two decades to become the largest group of refugee arrivals in Columbia, according to the Catholic Charities of Central and Northern Missouri.

At least 675 refugees have resettled here. Si said they remain close, attending each other’s weddings and birthdays and planning sports and other events together. They have also built a community that includes a restaurant, grocery store and four churches.

Sai Tai’s Tiger Chef is an authentic Southeast Asian diner in north Columbia that serves a fusion of Burmese and Thai food. Tai and his wife, Nang Lont, opened it in 2019.

“Basically, everybody knows each other,” Si said.

The country of Myanmar, called Burma until 1989, is tucked between India, Bangladesh, China, Thailand and Laos in Southeast Asia. At least 135 different ethnic groups live in an array of administrative areas that include states, regions, territories and other divisions.

Burma was a British colony in the 1800s and early 20th century until it became a battleground between the Allied forces and Japan during World War II. The country declared its independence from Britain in 1948 and has been a crucible of conflict and turmoil ever since between regions, ethnic groups and a military junta.

Armed forces held power from 1962 until 2011, when a new government began moving toward civilian rule. This year, the unrest escalated after the military seized power in a coup in February.

Of the nearly 671,500 refugees accepted by the U.S. since 2003, about 174,000 or 26% have come from Myanmar, according to data from the UN Refugee Agency. They have made up the largest refugee group in the United States for the last 20 years.

Refugees are the most vetted group of immigrants that come to the United States, said Samantha Moog, director of refugee resettlement with Catholic Charities.

“Refugees are not just any immigrant,” she said. “They have survived war and things we could only imagine.”

Refugee and Immigration Services of Catholic Charities handles placement within 38 counties in central and northern Missouri, but most resettlements take place in Columbia, aside from the few Russian and Ukrainian refugees who live in Sedalia.

“We’re really lucky and grateful that Columbia is such a welcoming community,” Moog said.

The city has a healthy job market that makes it easier for refugees to get employment, Moog said. There is also a snowball effect when an established group from one country attracts additional newcomers looking for a support system.

An organization called City of Refuge helps those who have settled in Columbia.

“It surprised me in a good way, how supportive this community has been for refugees,” said Garrett Pearson, executive director of the City of Refuge.

In a pinch, volunteers will also resolve more immediate needs, such as explaining Zoom to parents whose children switched to virtual classrooms during the pandemic.

“For each person it’s a little different,” Pearson said, “and our organization kind of exists to be whatever we need to be for that person.”

Sai Tai came to the United States from the Northern Shan State in Myanmar. Shan is the largest state in the country and home to numerous armed ethnic groups, which creates ongoing political and economic tension. After being forced into unpaid labor, Tai fled in 2005.

He lived first in Thailand and then Malaysia before applying for refugee status with the U.N. Refugee Agency in 2009. He arrived in Columbia in 2011.

“Wherever they send you, we have to go,” Tai said. “It’s better than Asia and our country.”

Once again, Tai had to start from nothing when he arrived in Columbia. The biggest challenges were transportation, he said, the language barrier and finding a job.

He got around initially on a bicycle while saving for a car. He took English classes and learned enough of the language to get work at the Kraft Heinz factory in the north part of town. He still works there, in addition to running his restaurant.

Si learned English in the public school system, taking classes until she no longer needed them in the sixth grade. But cultural barriers persisted.

In rural Myanmar, for example, it was quite acceptable to wear the same clothes for several days, but here, she was teased in school for showing up in one outfit three days in a row.

Both are now active in the community, but in different ways. Tai sells Myanmar- themed T-shirts and sends the proceeds back home. Si helped organize the anti-military junta demonstrations outside the Daniel Boone City Building back in February and March.

The recent backlash against immigrants remains troublesome to the Myanmar refugees, however. They just hope for tolerance and understanding.

“There’s that whole anti-immigrant sentiment,” Si said, “and what I want people to know is that everyone just wants to survive and have a better life.”

Myanmar forces kill over 100 in deadliest day since coup