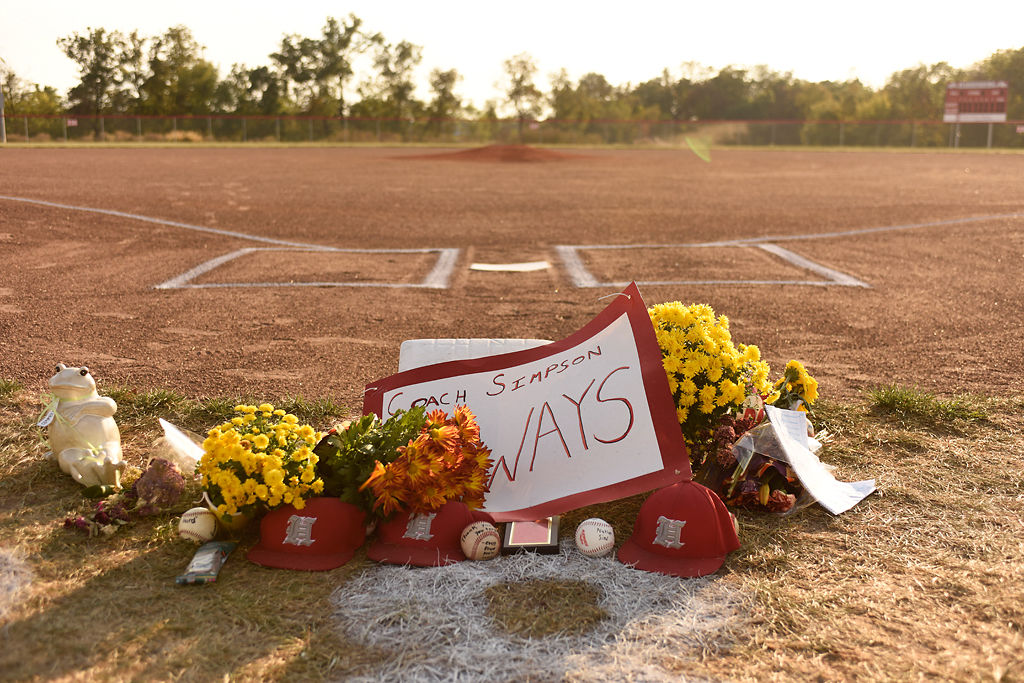 A memorial for deceased Harrisburg High School baseball coach Brian Simpson sits on the school’s baseball field on Monday in Columbia. Simpson was killed Thursday after a truck crashed into a school bus he was driving. 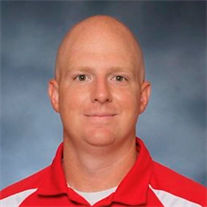 Brian Simpson was the kind of guy who would secretly place a new pair of shoes in a neglected kid’s locker.

His friends say the former coach and history teacher in the Harrisburg R-VIII school district, who died in a bus accident Thursday, wore many hats in his community. He transformed a losing baseball program into a three-time district championship team.

He volunteered his weekends in the dunk tank during the town’s annual Septemberfest. He was a loving husband and father to his wife, Jennie, and daughter Bradey.

Simpson, 37, was driving a group of student-athletes to a cross country meet on Thursday when a truck crossed the center line and caused a head-on collision that ended Simpson’s life. The following day, Harrisburg schools were closed and counselors were made available to support students and staff.

A memorial service for Simpson will be held at 2 p.m. Tuesday at The Crossing Church, 3615 Southland Drive. A private burial will follow.

Students and colleagues said Simpson instilled a lively passion for history. From government to geography, he enhanced lesson plans with games and engaged with students in difficult conversations.

Harrisburg Superintendent Steve Combs recalled how mature Simpson was when he first interviewed him for a coaching position 15 years ago. A young MU student at the time, Simpson had switched from engineering to education when he felt a calling to teach.

After hiring Simpson, Combs watched him fall in love with the school’s history teacher, Jennie. Simpson moved to Harrisburg from Columbia, where they married had a daughter.

Chris Ackman, Simpson’s friend and co-worker, remembered Simpson for handing out endless high-fives to passing students in the hall. The two taught history in rooms across from one another and coached the high school’s baseball team together. Ackman said his favorite memories were simply being with him.

“We spent so many hours out on that field for practice, for games, getting ready,” Ackman said. “We’d spend times just sitting in the parking lot talking. I won’t forget any of those moments.”

Christopher Atkins, a senior at Harrisburg High School, was out hunting Thursday night when he heard the news. He said he returned to the school, where students and staff were grieving.

At 8 p.m., they held an impromptu memorial service on the high school baseball field, prayed and shared memories of their teacher. Home plate was filled with candles.

“There was never a dull moment with him,” Atkins recalled. “You could really talk to him about anything.”

The high school senior remembers Simpson for his jokes and laughter, saying there was never a moment when Simpson couldn’t put a smile on a student’s face.

“Don’t be that guy,” was one of his favorite sayings.

Brian Todd Simpson was born July 24, 1980, in Kansas City, the son of Darrell Jay and Judith Lorene Bryant Simpson, according to an obituary in the Missourian provided by the family.

He received a bachelor’s degree in secondary social studies from MU and was working on a master’s degree in educational curriculum through the University of Central Missouri.

Online condolences may be left for the family at nilsonfuneralhome.com

Brill, who was involved in the vehicle crash that killed Harrisburg teacher Brian Simpson, did not plead.