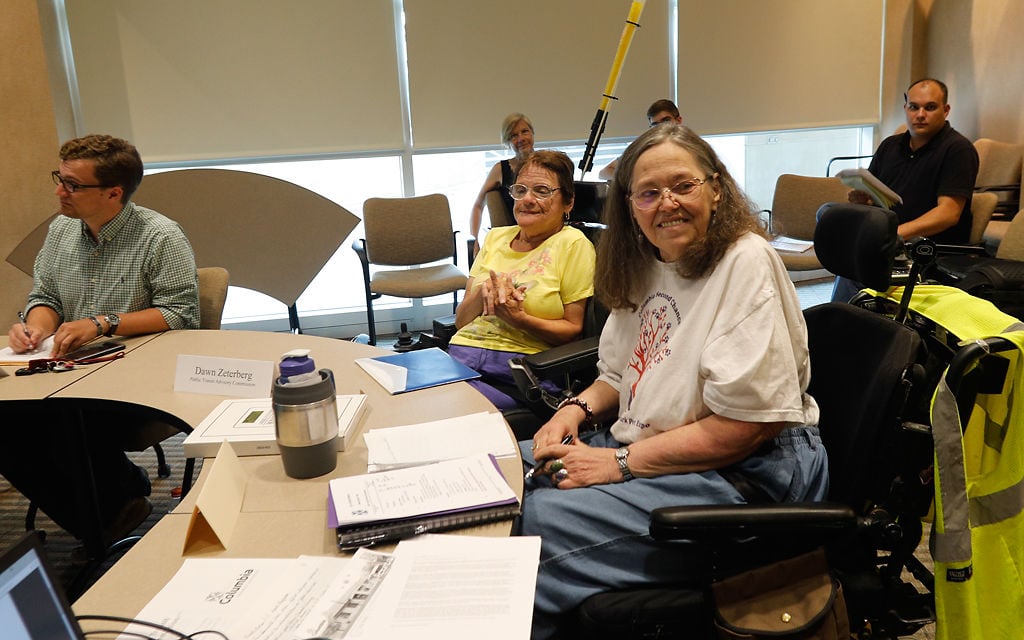 Cheryl Price, vice chair of the Public Transit Advisory Committee, right, and Dawn Zeterberg, left, a member of the same committee, considered budget changes that will impact public transportation on Thursday in City Hall. The pair traveled to the meeting together by using para-transit service offered by public transportation. A proposed fee will raise the cost of riding para-transit from $2 to $3, as well as reduce the service area in the city of Columbia. 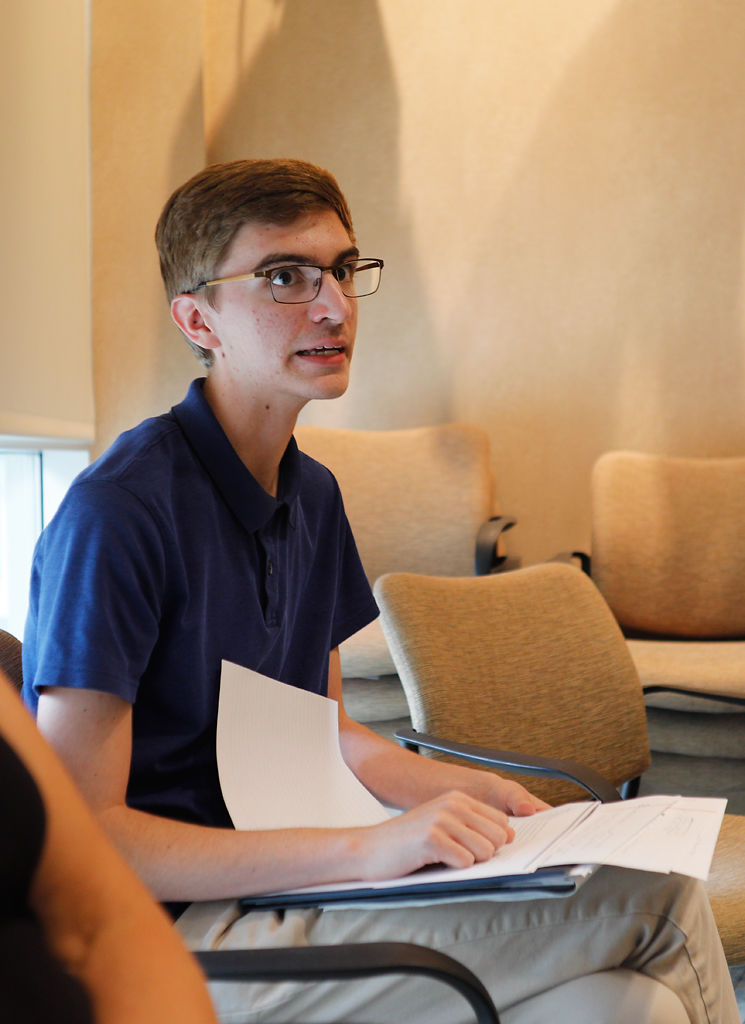 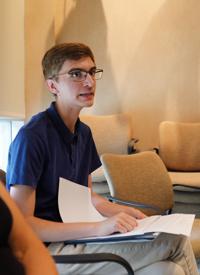 Cheryl Price, vice chair of the Public Transit Advisory Committee, right, and Dawn Zeterberg, left, a member of the same committee, considered budget changes that will impact public transportation on Thursday in City Hall. The pair traveled to the meeting together by using para-transit service offered by public transportation. A proposed fee will raise the cost of riding para-transit from $2 to $3, as well as reduce the service area in the city of Columbia.

Cuts to the Go COMO bus system in the proposed city budget for fiscal 2019 have members of the Public Transportation Advisory Committee worried that the city is reducing the service to the point where it could kill it.

Committee Chairwoman Kathy Lee understands the need for public transportation after getting around the city without a car for almost two years. Three years ago, she started attending committee meetings as a private citizen to ask questions. She was later appointed to the group and became chair this year.

Lee drafted a letter to the City Council expressing the committee’s problems with changes to the bus system that City Manager Mike Matthes proposed when he revealed the budget for fiscal 2019 in late July.

The City Council discussed those changes and other budget matters during a work session Monday. The committee took up the bus issue at its Thursday evening meeting.

Although Lee agrees with some of the changes, such as using the Wabash Station as a hub, she believes the cuts play into the stereotype that public transportation only serves low-income members of the community.

In many cases, she said, people have other reasons for not having a car, including poor vision or seizure disorders. Others don’t want the burden of maintaining a vehicle or ride the bus because they think it’s environmentally friendly.

The budget for the bus system will be subject to public comment at the second round of hearings the Columbia City Council will hold on the overall $453 million spending plan for fiscal 2019 on Monday night.

The first proposed changes is to end bus service at 7 p.m. on weekdays and Saturdays. This would affect about 15 riders per day, according to Matthes’ budget presentation. It is the only change that would take effect on Oct. 1, the beginning of the fiscal year.

The rest of the changes would take effect June 3 to give the city time to satisfy requirements of the Federal Transit Authority, which provides grant money for the system. Those changes call for:

All those changes to the regular service would affect 600 monthly rides, according to the budget presentation.

Transit Advisory Committee member Diane Suhler, a representative of Columbia College who holds a doctorate in finance, said at the Thursday meeting that the changes could mean the death of public transit in Columbia.

“The more buses and service that you have the greater ridership and revenue you have, and people will be willing to ride the buses because they know that bus will come every 10-15 minutes,” Suhler said.

Suhler also said the city should consider how much it spends to support residents who rely on buses compared to those who drive.

“When you start to look at city expenditures on roads, parking spaces and garages, and you look at that on a per-capita basis, how much are we spending on residents for those sorts of services vs. the people who drive the bus system?” Suhler asked.

“If we could do some research and come up with some numbers for that and say, for example, we’re spending $10 per person for all of these other amenities, and we’re spending $5 for people who do ride transit, it would be a very unethical situation.”

Transportation Superintendent Dale Lynn told the committee that the cuts and changes would allow the city to keep all its full-time bus workers but save the cost of training and insuring temporary staff.

“A city this size with a flagship school and other universities and campuses in this town, we should have a much more robust system than what we have,” Lynn said.

“Council needs to work hard to determine how we can fund transit.”

An increase in para-transit fares would be the first since 2009.

Columbia has offered para-transit service since 1995, Go COMO marketing specialist Amanda Capua said. The city gives 215 to 300 rides on weekdays and 75 to 100 on Saturdays.

The service is now offered citywide, but the budget proposes scaling down to offering the service only to people who live within three-quarters of a mile of fixed routes. That would meet Federal Transportation Administration standards.

Lynn said that there are 164 eligible clients who live in the area that would be cut but that only eight to 10 people use the service regularly.

Para-transit costs the city about $27 per ride. Still, Lee isn’t happy with the proposed price increase.

“Even that $1 increase in your ride each way on para-transit could make a difference as to whether they can go five places in a month or one,” she said. “You can have all the jobs you want, but if we can’t help people get to them, that’s not so great.”

Committee Vice Chairwoman Cheryl Price, who uses a motorized wheel chair and para-transit, said she’d like to find money for the system before the changes take place.

The changes to Saturday service would affect around 600 passengers. About 500 people ride MU football shuttles, which cost $1.50. The service costs the city about $12,000 each year.

“If you eliminate Saturday service, you can’t do any outside or extracurricular transportation because its considered charter work, and FTA doesn’t allow that,” Lynn said. “With charter work, you have to have a competitive bid if other vendors are in the area to give them that opportunity first before the city can take on that responsibility.”

Public transportation shuttles around 200 people during Roots N Blues, which attracts about 10,000 people per day.

Richard King, president of the festival, said public transportation has been helpful, but he emphasized that private shuttles, bicycling and walking to the festival are also options.

“We were very fortunate to have that service, but if it’s cut we understand,” King said. “Overall we would like to see our transit system as profitable.”

In other action, the council will introduce several ordinances that will revive the debate over whether to extend a sewer line into the Henderson Branch watershed at a cost of $4 million. The ordinances would come up for debate and possible votes on Sept. 4.

The council in May defeated a plan to install the sewer line in exchange for agreements with Larry Potterfield, owner of MidwayUSA, and Dale Bechtold, owner of the Midway Truck and Travel Plaza, to allow the city to annex their properties once they become adjacent to city limits.

The sewer line and those agreements are back before the council, along with a new agreement that would allow the city to annex 31.5 acres of property owned by the Fritz Family Gift Trust. That land would bridge the gap between the city boundary and Potterfield’s land, which means MidwayUSA could be annexed immediately once the sewer line is in place.

The Public Transit Advisory Committee also will hold its next meeting at 5:30 p.m. Sept. 27 at City Hall.

The Public Transit Advisory Committee also will hold its next meeting at 5:30 p.m. Sept. 27 at City Hall.

A letter from the commission reprimands the city for “devastating” cuts, including ending service earlier in the night and ceasing some service entirely.

The Henderson Branch project will up for yet another vote of the council after being rejected in May.