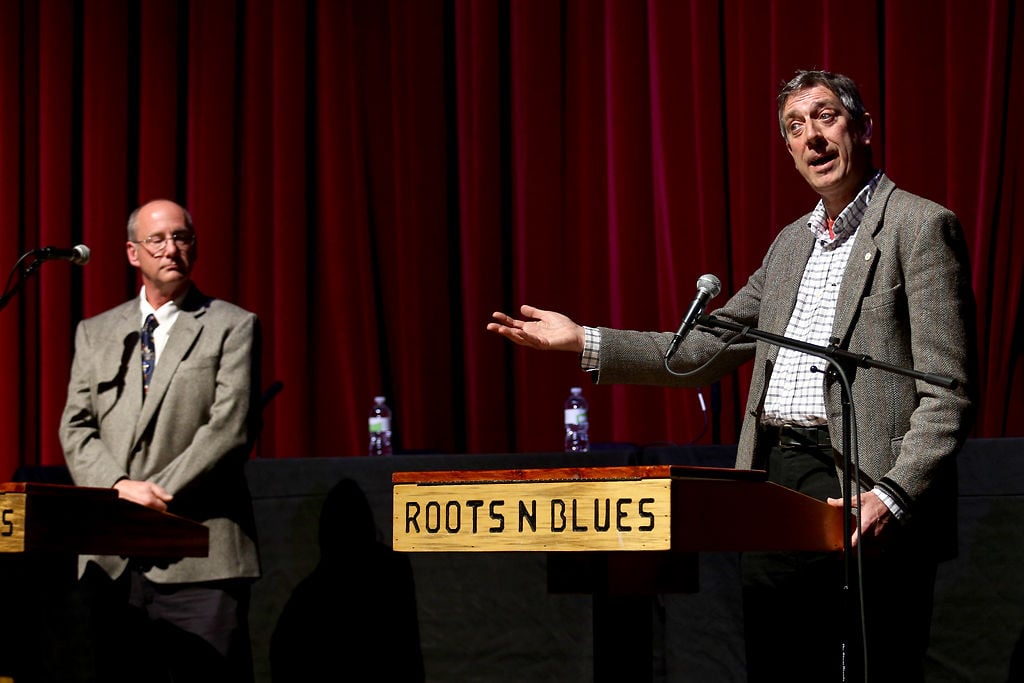 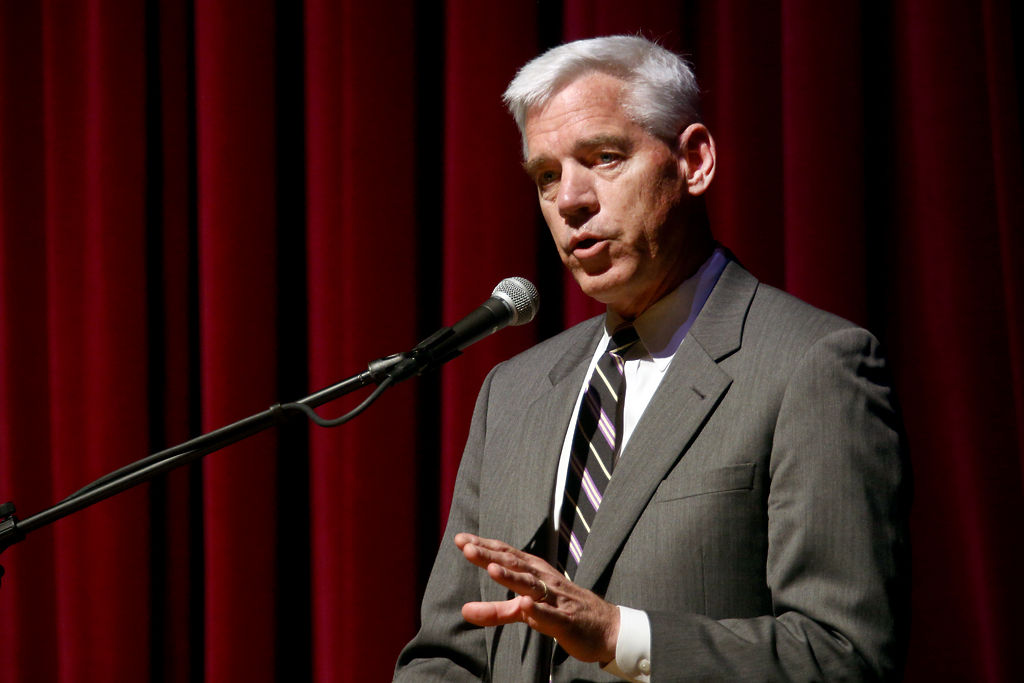 Columbia mayoral candidate Skip Walther answers a question during a debate-style forum on March 13 at the Rhynsburger Theatre. 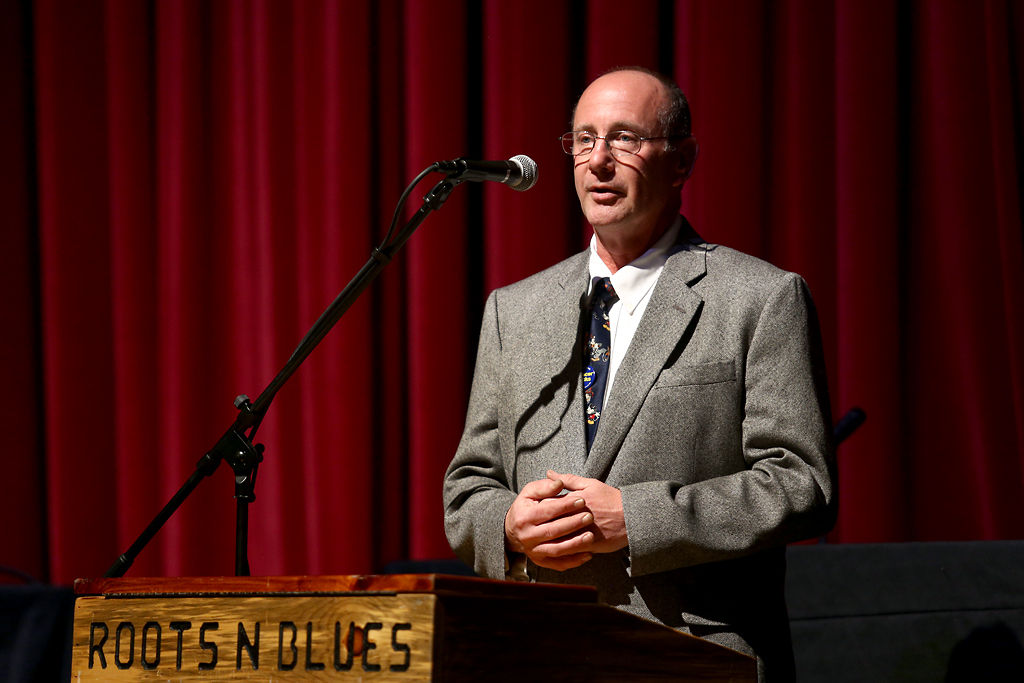 Fourth Ward Councilman candidate Daryl Dudley answers a question during a candidate forum on March 13 at the Rhynsburger Theatre. 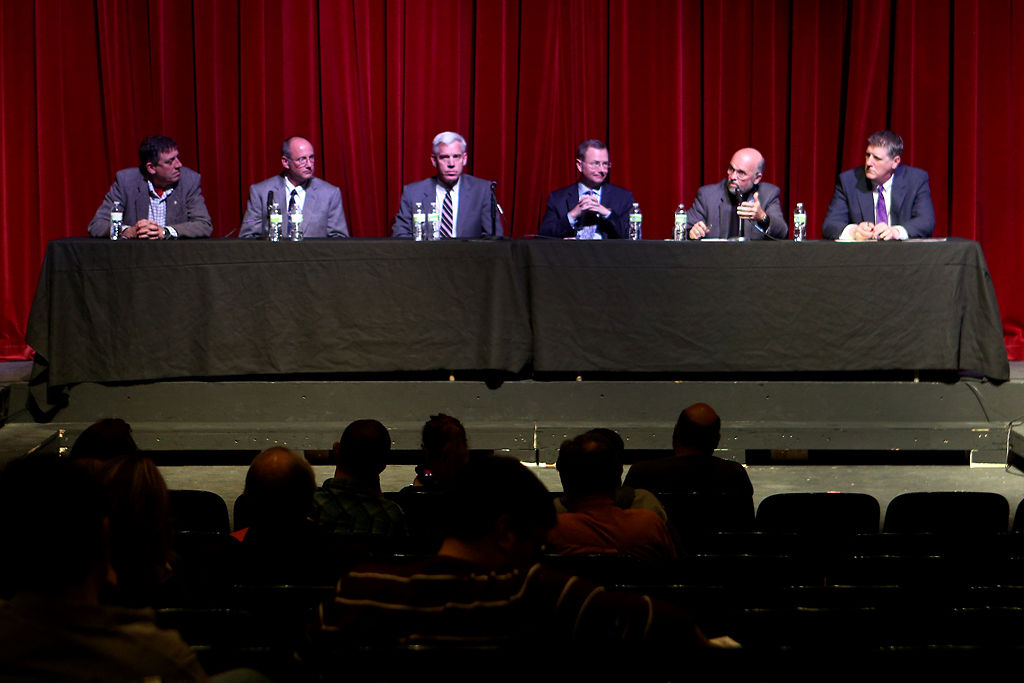 Candidates seeking election to city office answer audience questions during a debate-style forum on Sunday at the Rhynsburger Theatre in Columbia, Missouri. The forum included candidates for mayor as well as for third and fourth ward councilman.

Columbia mayoral candidate Skip Walther answers a question during a debate-style forum on March 13 at the Rhynsburger Theatre.

Fourth Ward Councilman candidate Daryl Dudley answers a question during a candidate forum on March 13 at the Rhynsburger Theatre.

Candidates seeking election to city office answer audience questions during a debate-style forum on Sunday at the Rhynsburger Theatre in Columbia, Missouri. The forum included candidates for mayor as well as for third and fourth ward councilman.

COLUMBIA — Differences among candidates running for mayor and for the Third and Fourth ward seats on the Columbia City Council — particular in regard to downtown development and infrastructure and funding for additional police — began coming to light Sunday during a forum at Rhynsburger Theatre.

Here's what the candidates had to say.

Skala said the Third Ward’s infrastructure has long been neglected. Growth, he said, has outstripped road and city services capacities, and he wants to continue City Council work centered on solving these issues.

Both candidates emphasized infrastructure problems in the Third Ward. Leuther said it was important to address “old, failing infrastructures” in the Benton-Stephens neighborhood.

Skala said his campaign is aligned with the city’s 2016-2019 strategic plan that focuses resources on many neighborhoods facing infrastructure issues, including Benton-Stephens.

“(The Third Ward has) been neglected for many, many years as regards to infrastructure, both soft and hard on the north side of town,” Skala said.

He cast infrastructure as an equity issue, saying that residents of neglected neighborhoods should have equal opportunities as compared to those from other parts of the city.

Regarding issues of downtown parking overflow into the Third Ward, Skala indicated that solutions should be left up to the Benton-Stephens neighborhood, not the council alone. Skala indicated he wanted to hear discussion about overflow occurring as a result of an unplanned influx of population density.

Leuther said population density and lack of parking put pressure on outlying communities, leading them to resent the influx of people downtown. He said the money that was spent on parking consultants in 2010 was not spent wisely.

When asked about ways to cover infrastructure costs stemming from development, Skala said residential and, to a lesser extent, commercial development fees should be raised. He said he helped develop a ballot proposition in 2014 to modestly increase development fees that failed because it was too complicated.

He said the public has to be better informed about future propositions, and that developers should be encouraged to play a bigger part in paying for infrastructure costs in a rebalancing of cost coverage between private and public entities.

Leuther said these taxes discourage business creation, but that economic growth and job creation are more important in generating tax revenue to cover infrastructure costs than a direct tax.

He said increasing housing prices would raise costs for affordable housing and rentals, and that high living costs are already leading citizens, and especially police officers, to move to more affordable cities.

Skala disputed this claim, saying Columbia’s business environment is highly-ranked, and, while Columbia has higher costs of living than some surrounding areas, it offers services and advantages they lack.

Skala at times has been criticized for a lack of support for businesses. He said he wanted better representation from Regional Economic Development Inc. to the council. Skala said while he was pro business, the proposed downtown CVS location in 2013 was not built because the business refused to follow city law.

Leuther said the CVS situation discouraged business creation because CVS lost money planning a downtown location. He said minority unemployment issues could have been resolved through job creation with CVS.

Leuther said voters should have more information regarding tax initiatives and how revenues will be used. He said it's unclear how much surplus city funding resources are available, which determine whether taxes should increase. He said taxes have been raised in a disguised way, which decreases trust and transparency.

Skala said the city has leftover money from incentive-based budget savings. He said taxes have not been raised for years, and that existing tax money is already allocated. Skala said the only way to pay for more public safety officers is to increase taxes.

The introductions between Fourth Ward incumbent Ian Thomas and challenger Daryl Dudley started off with accusations. Ian Thomas started his opening statement by accusing Dudley's campaign staff of false advertising through push-poll calls to Fourth Ward voters that questioned Thomas’ conduct and stances on past and current city issues. Thomas also made reference to the fact that Dudley had missed four of the last five forums

Dudley kept to his message and said the city needs to focus on crime, jobs and growth.

The first question of the forum asked for a response to Thomas' introduction. Dudley asserted that he didn't know anything about the push-polls and apologized for missing the forums.

Dudley said when he was on council from 2010 to 2013, he wanted the lines to be outside of city limits. "That way they're not going where any people are."

He said it would be better for the lines to already be in existence when people moved into the area, as opposed to disrupting current residents.

"We need to move quickly," Dudley said. "We have the bonds that have to be used before they expire."

"If we lose those bonds, we're going to lose our bond rating, and we won't be able to get anymore bonds."

Thomas said there has been a lot of growth in south Columbia, and the demand for power at the peak time of day is increasing.

Because people are more efficiently using electricity, Thomas said it would be better for the city to take its time to conduct a proper study instead of wasting millions of dollars of taxpayer money.

One of the most discussed issues during this race has been police staffing. The Columbia Police Department is often at status-zero, which means no officers are available to respond to incoming calls.

Thomas said there's been racial violence and disruption within the community. He believes a community policing effort is essential to fix the lack of trust between residents, business owners, church pastors, school children and the police. As for funding, he said he would ask the voters.

He floated the idea of higher development fees, so regular taxpayers won't be paying as much, Thomas said.

Dudley said the police department is understaffed and morale is low. He thought the best way to improve it is to add more police precincts.

"We need to start putting police officers out in the neighborhoods," Dudley said.

Race Matters, Friends, has pushed a discussion about government transparency. Recently, the group has hosted candidate forums to discuss transparency with members of the community, and it has also commented at council meetings.

Thomas said people engaging in government is healthy. But the pushback from residents shows a lack of transparency on the part of the government.

Dudley said: "The interesting thing is we only get a lot of pushback from just a few people. Most of the people in the town just go along with what happens."

He said everyone in the community is impacted by every decision, so a broader range of people need to be involved in the process. Dudley specifically cited businessmen, construction workers and academics.

In the past, Dudley said transparency can get in the way of making decisions. He said people need to trust that government officials are making the best decisions, so not all transparency is essential.

"I do not support any lack of transparency within the government," Thomas said.

The candidates debated over the merits of a proposed new development code.

Treece called for the return to a “sufficiency of services test” from before 1988. He said that in that code, developers could convince the council to let them create residential uses within their businesses. He said it created a “loophole, but the council never anticipated that today developers would be “demolishing entire blocks of downtown and putting up only residential uses” with no “commercial, retail or parking requirements.”

Treece said looking at the zoning code with the 1988 code in mind could be a good start to restoring: “a clear expectation for sufficiency of services, basic utilities, parking requirements … even protecting the character and quality of the neighborhood it was affecting.”

Walther disagreed. He said the changes made in 1988 were responsible for the rebirth of downtown, and he wouldn't bring back a sufficiently of services test. Walther said he thought residential development downtown was good. But there were issues with growth, such as parking requirements for residential uses, that are not addressed in the proposed code.

“If we want to, we can increase the parking requirement, which will force people who put these buildings up to build parking within their structures, and frankly, I think it’s an idea we should seriously consider,” he said

Treece said he doesn’t believe the issues of downtown can be addressed with the current zoning code.

“We need to make sure we have the infrastructure in place prior to when development occurs,” Treece said.

Both candidates have expressed a need for more policing in Columbia, but each has a different idea of how to pay for them.

Treece said the first step is to look at the city’s budget to see where cuts could be made and reallocated to the police. He said natural population growth over the past few years could help pay for more officers, as more people are paying taxes.

But Walther said payment for police comes out of the general fund, which doesn't increase as much as Treece asserted.

Walther offered a possible solution of a blend between property and sales tax increases, though he said in some places, sales taxes are pretty high. Walther also said he would not propose a property tax increase without a conversation with the Board of Education, which is the primary beneficiary of property tax, and with Boone County, which also uses the property taxes to pay for a lot of their expenses.

Treece maintained that voters had a low tolerance for tax increases and that realigning the budget was the top priority.

“But let me be clear: With or without a tax increase, we need to increase funding for public safety,” Treece said.

Development of the area surrounding the Columbia Regional Airport was also an issue raised. As construction in that area is imminent with a recent deal between a developer and the city of Ashland, that would take up an adjacent 477 acres to the airport. There was a question of whether the risk of the airport becoming landlocked would affect airport expansion.

Treece said he does not think “we are in jeopardy of land-locking that airport,” saying that "responsible planning" has been done to ensure it doesn't happen.

Treece wanted see if Jefferson City would share the cost of funding terminal development. He also wanted make sure the proposed idea of using an additional lodging tax to fund the new terminal was legal.

Walther dissented. He said “we are absolutely at risk of having the airport hemmed in with the Potterfield acquisition.” He said that capacity for expanding north and east is crucial, and they should consider acquiring more land.

As for payment, Walther said lodging and restaurant taxes were possibilities, but those ideas needed to be "seriously considered" before moving forward.