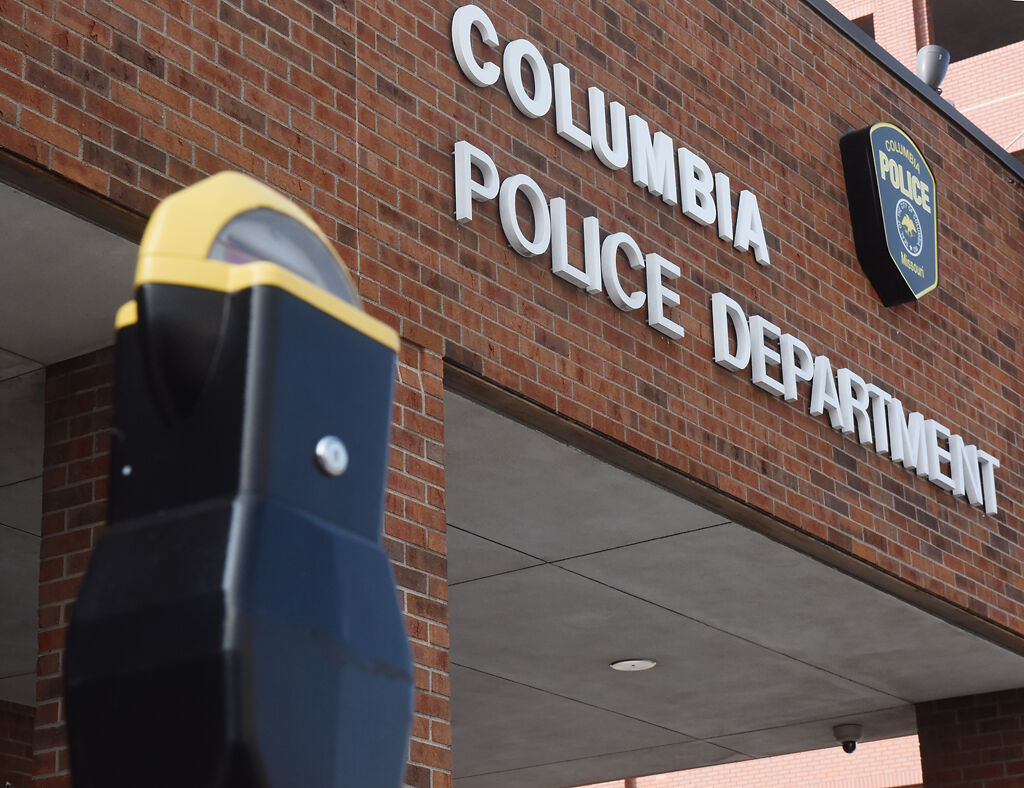 Parking enforcement downtown will shift to the Columbia Police Department as part of a policy change written into the city budget for fiscal 2021. 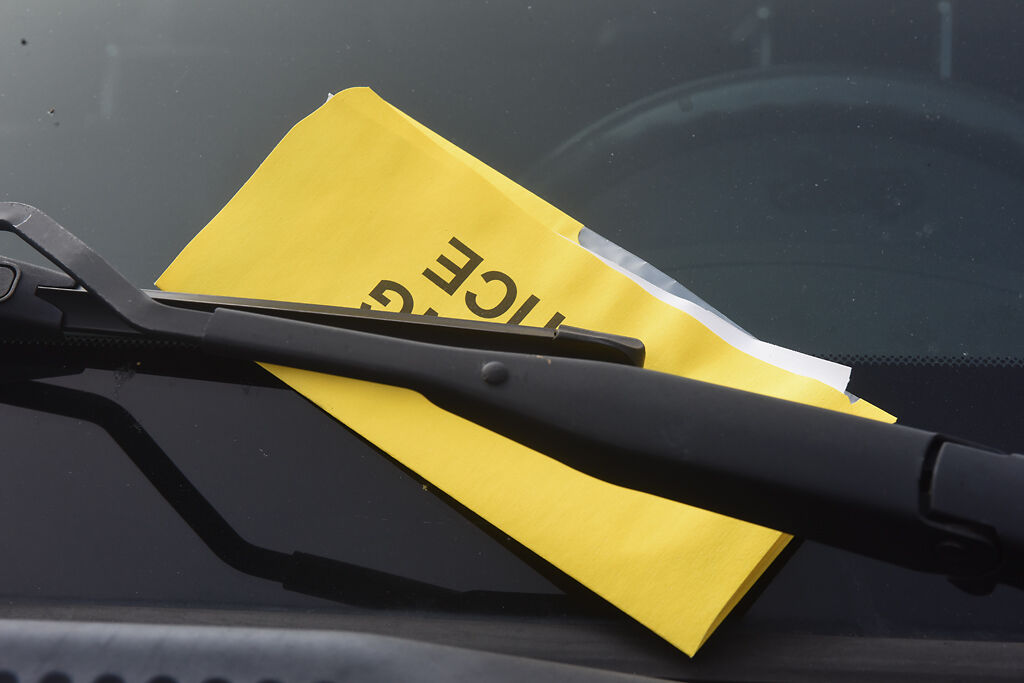 A parking ticket sits tucked under the windshield of an SUV on Thursday. The change in ticketing will result in fewer tickets issued.

Parking enforcement downtown will shift to the Columbia Police Department as part of a policy change written into the city budget for fiscal 2021.

A parking ticket sits tucked under the windshield of an SUV on Thursday. The change in ticketing will result in fewer tickets issued.

Parking tickets sticking out from under windshield wipers soon will become less common in downtown Columbia.

City officials say parking meter enforcement will relax somewhat in the coming year as they shift the responsibility for writing tickets to police officers on patrol in the central business district.

City Manager John Glascock proposed the change as part of the city budget for fiscal 2021, which begins Oct. 1. The Columbia City Council is scheduled to hold a final public hearing and vote on the budget during its regular meeting at 7 p.m. Monday.

Glascock said at an Aug. 13 budget work session that the change in parking enforcement is part of an overarching community policing initiative downtown. It also will reduce the burden of parking tickets on the Municipal Court and emphasize educating people about parking legally.

Until now, the city’s parking utility, which is part of the Public Works Department, has had four enforcement agents whose full-time jobs have been to seek out illegal parkers and write tickets. Community Relations Director Steven Sapp said Glascock believes it makes more sense to transfer that responsibility to the Police Department, which will have officers and community service aides fold parking enforcement into their other duties.

“It adds some efficiency to the operations of the Police Department, to be able to handle all that from their standpoint instead of going through Public Works because it’s an enforcement action,” he said.

The parking utility would reimburse the Police Department for the cost of enforcement.

The city gave existing enforcement agents the option to be trained as community service aides. One took the offer, while the other three have found new jobs, Sapp said.

Taking on the responsibility for parking enforcement will give police officers the chance to build better relationships and become more integrated downtown.

“We’ll have officers that are constantly seen by business owners, downtown patrons, parkers,” Sapp said. “They’ll become more familiar with the operations, the flow, the atmosphere and so forth in the downtown area. I think it will certainly make for a better community policing model.”

Fewer tickets should ease the strain on the Municipal Court, which has struggled to meet the requirements of a 2019 Missouri Supreme Court decision that all parking citations come with a court date. Violators are expected to appear in court unless they pay their fine beforehand. 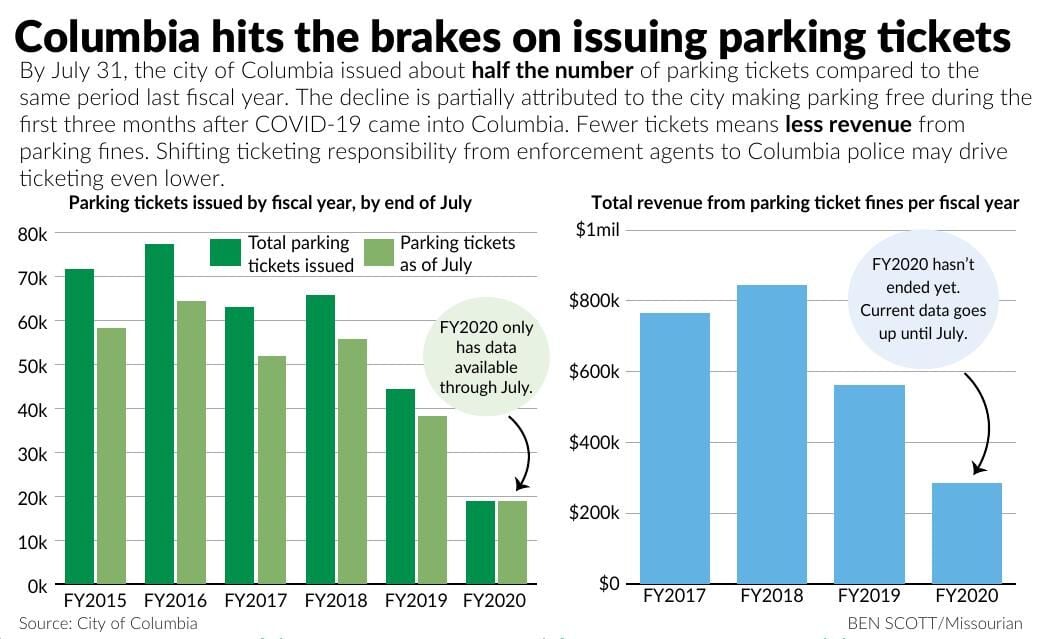 City Finance Director Matthew Lue said ticket writing has been on the decline in recent years, as meter attendants began to issue more warnings. The city issued 65,818 tickets in 2018. That dropped to 44,480 in 2019.

The goal now is to persuade residents and visitors to comply with parking rules before resorting to ticketing.

“We would be educating the public more than just walking down the street and putting a ticket on each car,” Lue said.

Fewer tickets will mean less revenue, but Lue said it won’t be substantial enough to hurt the city.

Income from parking meters and garage fees covers maintenance, while revenue from fines goes into the city’s general fund.

Lue said the city withstood the drop in revenue that came when it made parking free during the early part of the COVID-19 pandemic, from March 19 to June 16, to help reduce Municipal Court backlogs and encourage curbside pick-up from downtown businesses.

Sapp said the city would continue to monitor parking policies and adjust as needed. Glascock said it’s not about the money but about encouraging compliance.

“In my mind, we actually had the wrong model,” he said at the work session. “With that, we were more focused on the money it brought in than the function we were trying to do.”

The change received positive reactions from people downtown Friday evening. As she plugged coins into a meter, Maura Hull said enforcement already is fairly lax. She noted that the meter for the car parked next to hers had been expired for at least 40 minutes.

“It’s not like they’re really doing anything wrong,” she said. “They just didn’t pay their pocket change.”

Nick Haller said it makes sense that people should pay for parking but he thinks enforcement is “silly.” He said he knows people who never pay their parking fines.

“Businesses downtown are probably struggling and have been for the past couple months,” she said. “I don’t know if it’ll encourage people, but every little bit counts.”

The new policy should result in fewer penalties for people who make simple mistakes. Marc Chaudin said he sometimes gets tickets because he simply forgets to put money in the meter.

Parking enforcement under Columbia police as of Thursday